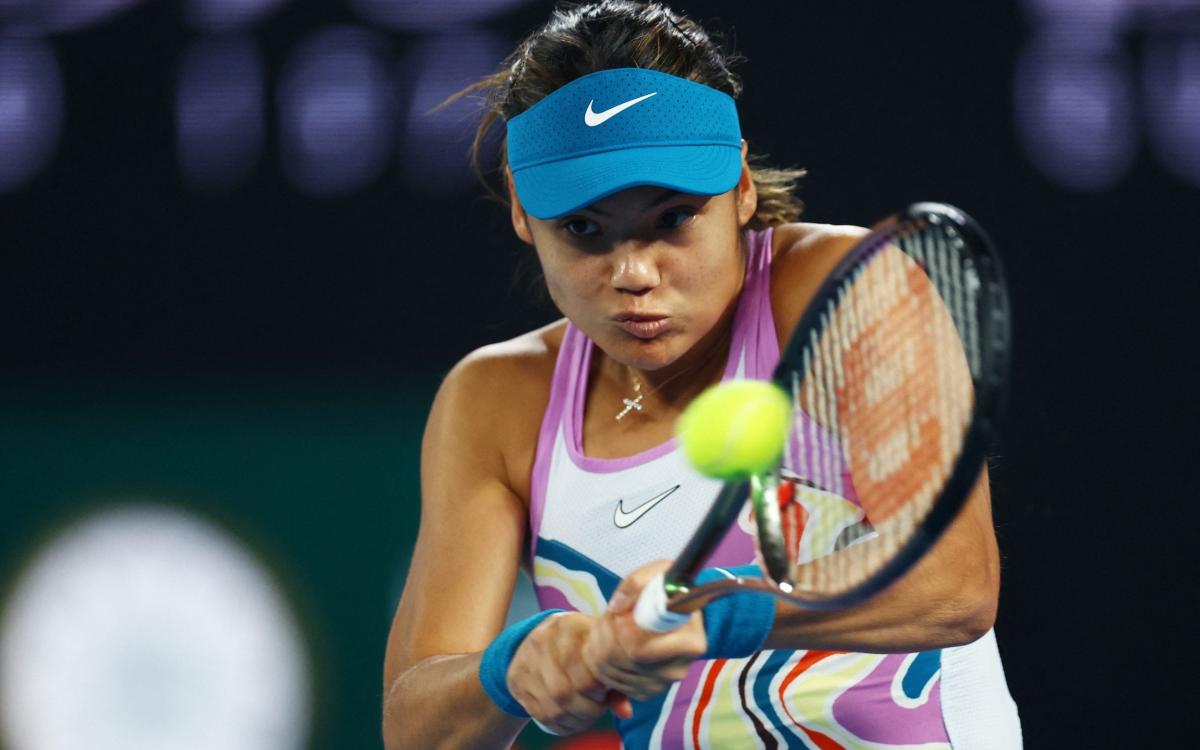 Raducanu gets Gauff on the run but can’t keep her forehand in play, 0-15. Brilliant cross-court backhand winner by Gauff, 0-30.

Raducanu goes for it with a forehand but pushes it long, three break points.

Raducanu saves the first. But not the second as Raducanu places a backhand into the net.

Chance for Raducanu here as Gauff puts another forehand long, 15-30. Raducanu goes on the attack and draws the error from Gauff, two break points.

First ace of the match by Gauff to save the first. A great second serve into the body from Gauff and Raducanu nets a forehand return.

Back-to-back returns into the net by Raducanu and Gauff holds.

It’s weirdly hazy in Rod Laver Arena, maybe the result of the pre-session show which had a country singer warming up the crowd. Did he have a smoke machine? You have to peer to see the ball.

Double fault on the opening point for Raducanu. Nerves? She then sprays a forehand well long, 0-30.

Brave second serve by Raducanu leads to a return into the net by Gauff. Backhand into the tramlines from Gauff, 30-30.

First prolonged rally and Raducanu comes out on top as Gauff goes long with a forehand, 40-30.

And Raducanu survives that scare to hold when Gauff puts another forehand long.

Early sign of Gauff’s power as she forces Raducanu to net in the first two points.

Raducanu wins it and opts to receive serve. She likes to do that, putting the onus on her opponent.

The two players walk onto court. Raducanu is the first on, still with her left ankle strapped. Gauff follows, wearing headphones.

Plenty of empty seats on RLA, hopefully, it will fill up soon.

… for Raducanu. How will she react to playing on one of the world’s biggest courts?

It will probably be the first time in a couple of years where Emma Raducanu won’t be feeling the type of pressure she’s been feeling since she won the US Open.

So that’s probably a good thing, to allow her to be more free and do her thing, because to me she’s the type of player, the type of person and the type of talent that we could use in the top 10. I think Coco is in the better position right now to make a deep run and I think it’s going to be soon that she’s going to win a major event, in the next year or two at the most. To me she goes in as a heavy favourite.

She seems to be playing better and better and serving more consistently than she has done. I would say that it’s a match she should win, but a match that could put Raducanu back on the map again, which would be good for her.

ICYMI: Nadal is out of the Australian Open

Overnight one of the biggest upsets of the tournament took place as an injured Rafael Nadal was beaten in three sets by world No 65 Mackenzie McDonald in Melbourne.

Hello and welcome to a mouthwatering showdown at the Australian Open between two of the best young players.

This time last year, Raducanu was playing at her peak and riding a wave of unprecedented success after breaking through in 2021 and clinching the U.S. Open while Gauff was making strides and reaching the second week of Grand Slams.

But Raducanu failed to find consistency last year as she was ravaged by injuries and underwent several coaching changes to fall to 77th in the rankings, while Gauff reached her first Grand Slam final at Roland Garros and now sits at number seven.

Gauff and Raducanu are seen as the torch-bearers of a new era of women’s tennis following the retirements of Ash Barty and Serena Williams, with the organisers scheduling their clash for the prime-time slot in the night session at Rod Laver Arena.

Such is their star attraction at such a young age that top seeds Iga Swiatek and defending champion Rafa Nadal’s matches have been relegated to the day session.

“I’m really looking forward to this match, I’m very up for it. Coco has obviously done a lot of great things and she’s playing well,” said Raducanu, who overcame an ankle issue to advance.

“She’s a great athlete with some big weapons… I think we’re both good, young players, we’re both coming through, part of the next generation of tennis really. It’s going to be a great match.”

While the entire hopes of a nation rest on Raducanu as the lone Briton left in the women’s draw, Gauff said she is not under the same pressure as the 20-year-old with several Americans in Melbourne to share the load.

“Being from the U.K., the first British person to do something in a long time, probably is a lot more pressure than what I’m used to being an American,” 18-year-old Gauff said.