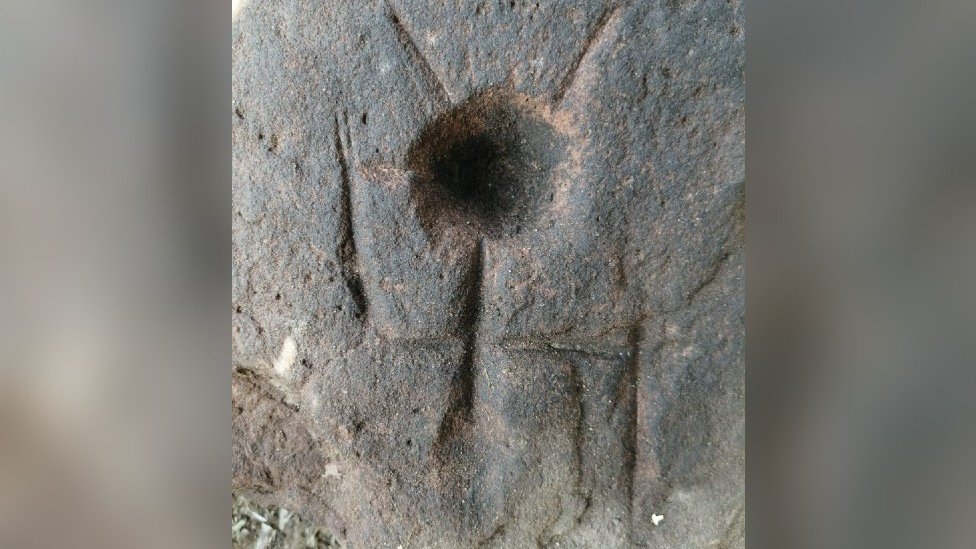 Two archaeologists are asking for help to solve the meaning of mysterious carvings on a piece of sandstone.

It was found during a dig last summer at Nesscliffe Hill, near Shrewsbury, by Dr Paul Reilly and Gary Lock.

The stone has circular and straight lines carved into it which the pair say look like a figure.

“We are inviting people to help us solve the puzzle or tell us if they have seen other similar carvings,” Dr Reilly said.

They have called the stone the Nessglyph and it was found in part of the area which was previously explored in the 1950s and filled in.

Nesscliffe Hills is managed by Shropshire Council and contains an Iron Age hillfort later occupied by the Romans.

Dr Reilly, from the University of Southampton, said the carvings looked to be a figure with four horns and two arms but, he added, the team had struggled to work out when and why it was created.

“It is difficult to find Iron Age parallels, but the carving has similarities with late Bronze Age carvings of figures in horned helmets,” he said.

“It is also worth noting that Nesscliffe lies within the putative territory of the Cornovii, a name that has been suggested to reference to the ‘horned ones’.”