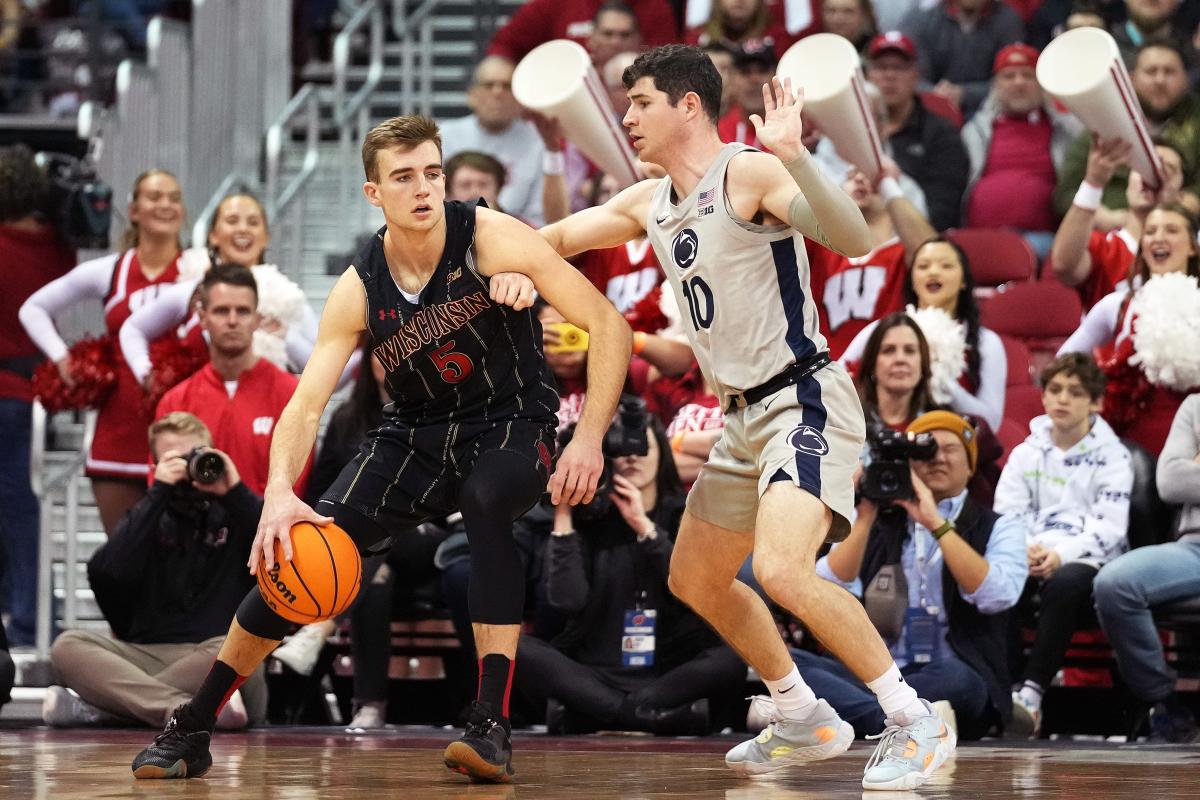 MADISON – How do you snap a three-game Big Ten losing streak?

Step 1: Welcome back senior forward Tyler Wahl, who had missed all three games because of an ankle injury and is Wisconsin’s most versatile performer.

Step 3: Get a huge bounce-back performance from Steven Crowl  and key plays from several others.

The result for UW Tuesday night at the Kohl Center was a 63-60 victory over Penn State.

Penn State (12-6, 3-4), which hadn’t played since recording a 19-point victory over Indiana, suffered its third loss in four games.

Crowl, who struggled in the loss at Indiana (five points, six rebounds, three turnovers), carried UW at times Tuesday. The junior scored eight points to keep UW within six points after one half and finished with 21 points and 11 rebounds.

Max Klesmit, a combined 2 of 10 from three-point range in the previous two games, played only one half Tuesday. He appeared to get hit in the face on a drive late in the first half and had to be taken to the locker room while blood was cleaned up from the court. He was ruled out because of an “upper body” injury and finished with three points and a rebound.

The Nittany Lions are a guard-driven team that entered the night fourth in the nation in three-pointers made per game (11.1) and shooting 39.5% from beyond the arc.

The Nittany Lions’ shooting prowess was on display in the first half.

Penn State entered the night shooting 39.5% from three-point range and 46.6% overall and topped both numbers in building a 36-30 lead.

Pickett, Dread and Funk scored eight points apiece to help the Nittany Lions lead for most of the half. That trio combined to hit 4 of 7 three-pointers and 8 of 15 shots overall.

UW forged a 25-25 tie on a three-point play by Wahl with 3:54 left in the half but Dread answered with a three-pointer to spark a 9-2 run that ended with a basket by Evan Mahaffey with 1:01 left.

Hepburn hit 1 of 2 free throws and Essegian scored on a steal to cut Penn State’s lead to 34-30 but then fouled Funk, who hit two free throws with 10 seconds left.

Hepburn missed a mid-range jumper and UW finished the half 12 of 31 (38.7%) and facing a six-point deficit.

The Badgers twice led by four points but Funk scored eight consecutive points for the Nittany Lions to prevent Wisconsin from pulling away. His basket in the lane forged a 49-49 tie with 8:24 left.

UW called a timeout with 3:51 left and Wahl fed Crowl inside for a lay-in but Pickett scored on Wahl with 3:11 left and the Badgers’ lead was down to one again.

The lead was 61-60 after Penn State’s Camren Wynter missed an open corner three. UW called a timeout with 1:25 left and just eight seconds on the shot clock.

Davis missed a deep three-pointer and Penn State called a timeout with 13 seconds left on the shot clock and 1:01 left in the game.

Hepbrun drew a charge on Pickett with 53 seconds left. Could UW pad the lead?

Wahl missed, Penn State grabbed the rebound and called a timeout with 19 seconds on the shot clock and 20.4 left in the game.

Funk, 3 of 6 from three-point range, missed from beyond the arc and Hepburn was fouled on the rebound with 7.8 seconds left.

Picket brought the ball across halfcourt and called a timeout with 4.7 seconds left.

Would UW foul up three?

They couldn’t get to Funk, but his shot bounced off the back rim, Davis grabbed the long rebound and UW celebrated a huge victory.