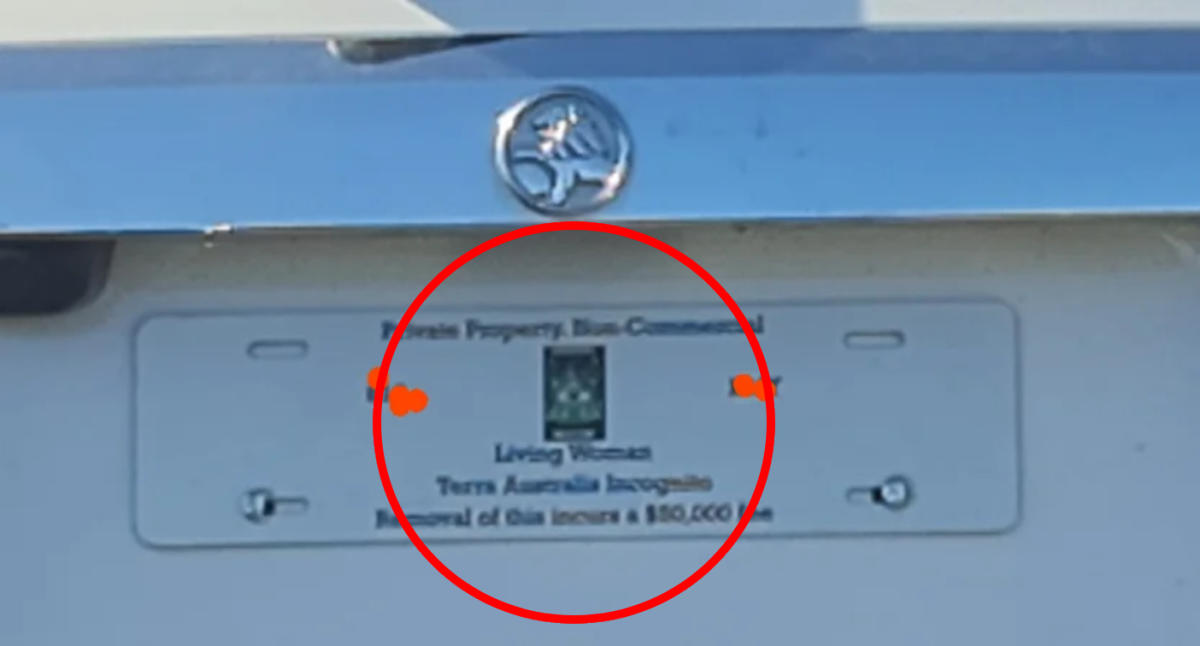 A bizarre home-made licence plate belonging to an apparent “sovereign citizen” is being roasted by other Aussie motorists, but also represents a concerning movement according to one expert on extremism.

A photo, captured on a North Queensland road and shared on Reddit, shows the rear of a silver Holden with a plate that features the text “Private Property Non-Commercial, Living Woman, Terra Australia Incognito”, along with a claim that removing the plate “incurs a $50,000 fine”. It also reportedly contains a legitimate registration number in extremely small text.

“Surely this is illegal? Is this some type of sovereign citizen thing?” asked the Reddit user who shared the picture. “Yep. It’s the vehicle of a moron,” one Redditor commented, joining a chorus of criticism and jokes about the motorist in question.

Who are ‘sovereign citizens’?

A growing group of fringe conspiracists, “sovereign citizens” believe the laws of the state don’t apply to them and can be opted out of. The Southern Poverty Law Centre in the US says “sovereign citizens believe they are not under the jurisdiction of the US government and consider themselves exempt from US law. They use a variety of conspiracy theories and falsehoods to justify their beliefs and their activities, some of which are illegal and violent.”

Some followers of the movement can actually pose a serious threat; in 2010, a father-son team of “sovereign citizens” in the US murdered two police officers with an assault rifle after being pulled over. Just last week in NSW, a police officer was forced to smash a car window after a “sovereign citizen” refused to get out of her vehicle and claimed she was not in the officer’s jurisdiction.

Speaking to Yahoo News Australia, Dr Ben Rich, co-director of Curtin University’s Curtin Extremism Research Network, said police and intelligence agencies around the nation are increasingly concerned about the “sovereign citizen” movement. “The injection of increasingly extremist American ideas reflecting that country’s own internal disfunctions has caused the overall movement to take a darker turn over the past decade,” Dr Rich said.

“While extremely diverse, the movement is based around a series of esoteric interpretations of common law that broadly boil down to the notion that individuals, rather than the state, hold ultimate dominion over their own persons,” he continued. “State-driven enterprises like taxes, road rules, territorial boundaries, gun restrictions and many criminal charges are thus argued to have no legitimacy in being levied against them.”

“The Covid-19 lockdowns were a real catalyst for Sov-Cit political mobilisation in Australia and we saw many of them turning out in anti-lockdown and anti-government protests in unprecedented numbers with their distinctive iconography,” Dr Rich explained. “Covid provided a kind of perfect storm to supercharge the Sov-Cit world view: restrictive government policies not seen in several generations; a lot of time in isolation to ruminate online; and a powerful new set of conspiracy theories driven by the QAnon movement all seemed to pour gas on the fire.

“A major concern with the movement has been around growing militancy, which again is reflecting trends witnessed in the US,” Dr Rich continued. “Police and intelligence agencies around the country are increasingly concerned that the movement may become a source of political violence due to a sense of unfulfilled goals and policies that increasingly constrain their activities. Tensions around this have of course all been heightened after the murder of police officers at Wieambilla by individuals involved in the movement and seemingly motivated by an apocalyptic interpretation of the ‘sovereign citizen’ world view.”