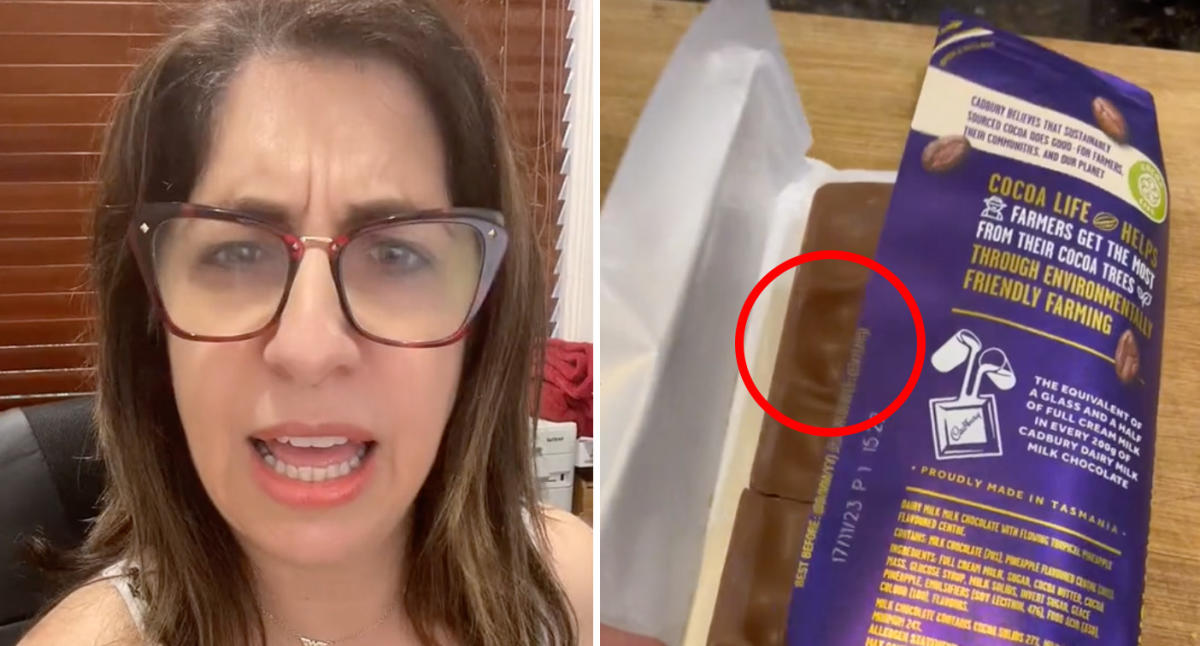 An Aussie woman was stunned after her chocolate purchase from Coles left her somewhat empty handed.

The woman, who goes by This Ethnic Life on social media platforms, was surprised when the Cadbury’s pineapple chocolate block, bought by her husband, was not flowing with the pineapple centre it had promised on the label.

In fact, it had no filling at all.

“It’s literally the Cadbury’s shell with no filling,” she announced in her video.

With the video gaining traction online for the unusual incident, the comments bounced between serious calls for compensation and joking cries of dismay at the unpopular flavour combo.

The woman decided to heed the call and reached out to Cadbury via email after social media user’s recommended she do so.

After several weeks, the woman received a response to her query and she jumped into action, sporting a pineapple themed dress to mark the occasion of opening the email while filming the outcome.

The chocolate shell in question also accompanied her, which had been carefully preserved.

Mondelēz International, the manufacturer of Cadbury in Australia, apologised to the customer for any inconvenience and “as a gesture of goodwill” arranged a Coles gift voucher for her to spend during her next shop.

However, when clicking through to the gift voucher she was miffed to see the voucher was for an underwhelming $5, less than the chocolate bar’s standard price of $5.50 at Coles.

“Are you actually serious? A $5 gift card,” said the disappointed woman when seeing the gift voucher.

However, Cadbury has informed Yahoo News Australia the initial voucher was issued incorrectly. A second voucher, valued at $10, has been sent directly to the customer to cover the new purchase in acknowledgement of price variability.

A twist to the chocolate tale

Before receiving the second voucher, the woman uploaded another TikTok video which showed her making the most out of the “funny” situation. She travelled down to Coles to spend the $5 voucher on more pineapple flavoured treats.

However, she suspected someone viewing her social media video may have copied her voucher code and used it for themselves. When she went to check out her pineapple treats her suspicion was confirmed. The voucher had been used and the woman had to fork out more cash for her sweets.

“If you are that desperate to go and use my code, I hope you got something good for it,” she said.

With the $10 voucher recently issued to the woman, the cost of the next pineapple flavoured purchase will hopefully now be covered by Cadbury.

Yahoo News Australia has reached out to the woman for comment.