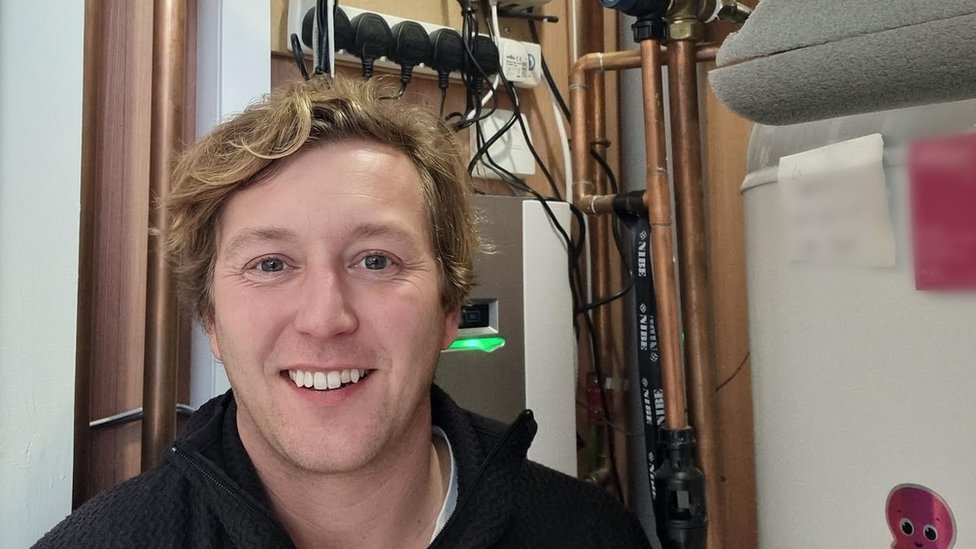 He’s got heat meters fixed to the pipework. Room temperature monitors. And gadgets tracking how much electricity his solar panels are generating.

The jewel in the crown of this system, though, is a recently installed heat pump.

“It’s like a geek’s paradise, really,” says Mick Wall of his 1930s semi-detached house in Sheffield.

Mr Wall, who works in IT, has made a hobby out of monitoring his household energy consumption and honing his heat pump’s performance in a dogged pursuit of maximum efficiency.

There is, however, an intrepid band of pioneers out there. Eager adopters who say the country is ready to go heat pump crazy – and that they can prove it with their own hard data. These are the heat pump geeks.

Mr Wall is one of a small number of enthusiasts who regularly publish data online about how their heat pumps are doing. “I’m putting myself out there to say, ‘This stuff does work, here’s the evidence,'” he says.

A website, heatpumpmonitor.org features real-time results from 12 homes around Britain, including Mr Wall’s. The data is processed via OpenEnergyMonitor, a digital platform that allows people to track their household energy consumption.

Heat pumps work by absorbing a small amount of heat from the outdoors into a refrigerant, the fluid that circulates within the device. A compressor then pressurises the refrigerant, increasing the temperature, and heat is subsequently passed on into the house.

A well-installed heat pump might get three kilowatt hours (kWh) of heat for each kWh of electricity it consumes. This ratio is called the coefficient of performance, or COP – the higher it is, the better. Heat pump-watchers tend to use this figure as a means of judging how well their device is working, sometimes in friendly competition with other heat pump owners.

The COP varies depending on things such as the weather or how hot you choose to have your radiators.

A COP of 3 or above is deemed very good because it means that the cost of running the heat pump should be cheaper than a gas boiler, for the equivalent heat output – depending on energy tariffs.

There are caveats, though. Mr Wall did have to spend thousands on upgrading radiators and pipework in his house, among other adjustments, before he decided it was heat pump-ready.

He chose an air source heat pump that draws heat from the air, even when it is very cold outside, and adds that it is important for the device to be correctly sized and installed, to ensure it runs efficiently. His solar panels also help him to reduce how much he pays for electricity.

But some homes may be suitable for a heat pump already, perhaps without their owners realising, suggests Richard Lowes at the Regulatory Assistance Project, an energy-focused non-governmental organisation.

As a rough rule of thumb, if you can still heat your home reliably after turning your fossil fuel boiler down so that it sends water at roughly 50-55C or lower to your radiators, you might be able to replace the boiler with a heat pump, explains Dr Lowes.

A professional heat loss calculation and heat pump survey can confirm this.

The cost of installing a heat pump will vary depending on what size of device you need and what work, if any, your home requires to make it heat pump-ready.

According to an online calculator set up by the research fund Nesta, putting a heat pump into a 1930s semi-detached house in the West Midlands, for example, could cost around £12,000. Currently, households in England and Wales may apply for a £5,000 grant, under certain conditions, to lower the overall cost.

Although installing a heat pump is expensive, the device is likely to pay for itself within its lifetime. Given the volatility of energy prices, it is hard to say when that breakeven point will be, but high gas prices have made heat pumps much more cost-competitive with oil and gas boilers.

Dr Lowes is an ardent scrutiniser of his heat pump system. His heating cupboard is bristling with heat and electricity measuring devices, which track energy consumed and the heat output of the heat pump.

He’s been averaging a COP of 3.5 across the year, which is even better than he had hoped.

Dr Lowes’ property is a renovated terrace in Cornwall, which he ensured was well insulated before getting the heat pump.

Most people who install a heat pump will not get access to detailed data on how it is running automatically, he notes. But with monitoring devices clipped on to the system, he and others such as Mr Wall are able to track things more closely. Mr Wall notes that he spent around £600 on his monitoring kit.

“Because we’re nerds and we’ve had them installed and tweaked them, we can also say how we can make it better,” argues Dr Lowes. “There’s this really valuable knowledge, I think, being built up.”

Still, many won’t want or require this level of information. Dr Jess Britton, an energy policy researcher at the University of Edinburgh and former colleague of Dr Lowes, says she had a heat pump installed in her 1930s Edinburgh home last year and hasn’t yet used any heat metering devices.

“I kind of want to know that it’s operating efficiently. Beyond that I’m not that interested in the data,” she says.

“Our early estimates are it was a good move in terms of our energy costs.”

It wasn’t that long ago that research suggested heat pumps weren’t able to outperform gas boilers in terms of running costs. Nick Kelly at the University of Strathclyde published such findings in a study in 2011, for example.

With rocketing gas prices and evolving heat pump tech, the situation is different now, he suggests, though he says it is paramount for a heat pump to be sized and installed properly.

Gathering detailed heat pump performance data can help prove that the devices are working as intended, he adds. “You can compare that to what was effectively promised by the manufacturer or installer.”

Mr Wall, for one, is very happy with the figures he’s getting. The heat pump ticks along, automatically adjusting itself to changes in the weather, while keeping the house warm.

What’s more, other members of the household haven’t questioned the heating once, he says: “In my book, that’s a very positive sign.”