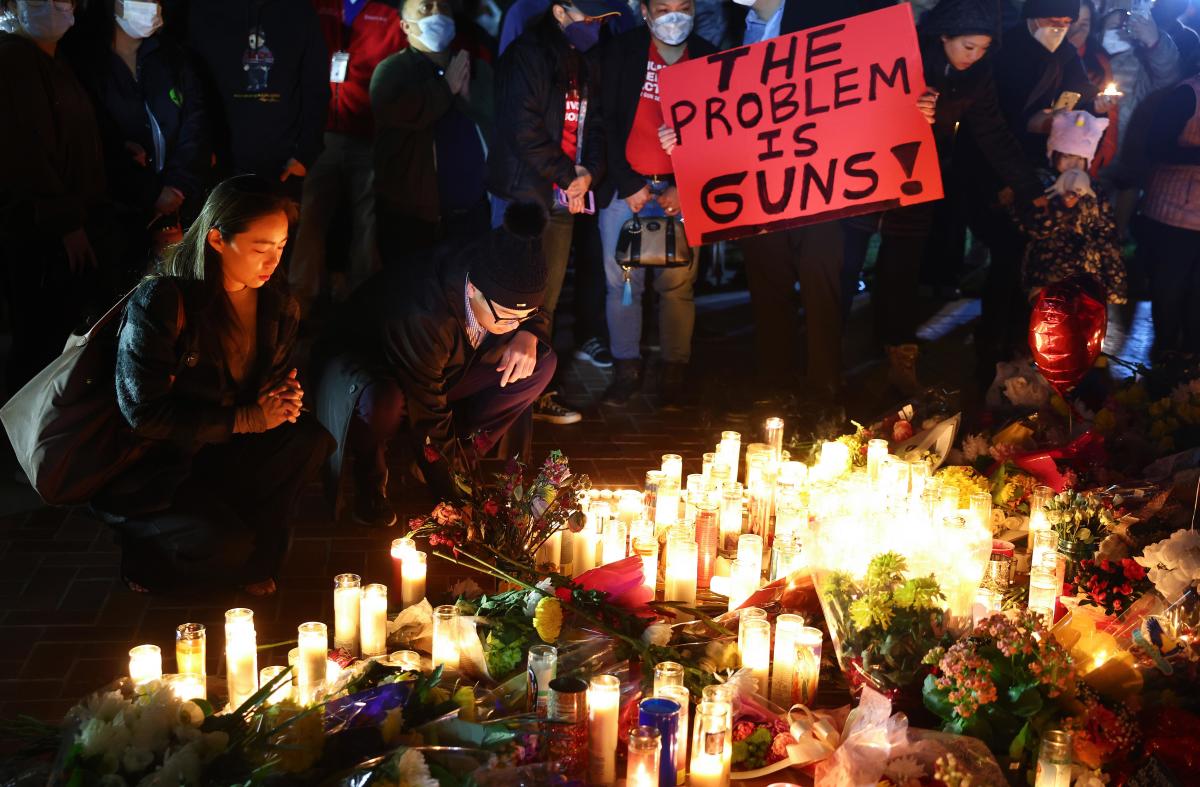 All the names of the dead from one California mass shooting had not yet been released when the news alerts started again on Monday afternoon: there had been another shooting. There was another gunman at large. Seven more people were dead.

Gun violence takes a daily toll in California, but the brutality, scale and pace of the past week has felt different. In the course of just eight days, at least 25 people were killed in four separate mass shootings, defined as any shooting in which at least four people are injured.

The killings – which cut across a big city, a placid Los Angeles suburb, and two small farming towns – have left residents shaken, exhausted and afraid, and renewed calls for some kind of fundamental change.

“This proliferation of violence just seems like it’s perpetual,” said Tinisch Hollins, the executive director of Californians for Safety and Justice, an advocacy group for survivors of violence. “It’s so common now to hear of mass shootings that they don’t even stay in the headlines. Not even a day later, we’re talking about an entirely different incident. It’s horrifying.”

An average of five California residents die from gun homicides each day, but mass-casualty shootings highlight how violence can upend any community in the state, from rural enclaves to quiet suburbs.

“At some point, you get tired of ‘thoughts and prayers’. You get tired of writing statements,” said Fernando Rejón, executive director of Urban Peace Institute, a community safety organization founded in California. “And you keep asking yourself, what is going to be the tipping point? After Uvalde and all these recent mass shootings, you think they’ll be the tipping point, and then it’s not.”

A Saturday night shooting in Monterey Park, California, America’s first “suburban Chinatown”, targeted a ballroom dance studio popular with elderly Asian American patrons on the eve of the Lunar New Year. Police said they were still trying to understand why the shooter, a 72-year-old Asian American man, had murdered 11 people, and injured nine more, at a studio he had apparently frequented for years.

On Monday afternoon, a 66-year-old Asian American man opened fire on current and former co-workers at two mushroom farms in Half Moon Bay, in northern California, officials said. Some of the killings reportedly took place in front of children who lived nearby, one official said: “For children to witness this is unspeakable,” she said. One person was wounded, and seven people died.

Less than four hours after the Half Moon Bay shootings, early on Monday evening, a group of people in Oakland were reportedly filming a music video when shooting broke out near a gas station. An 18-year-old was killed, and four other people were shot, ranging in age from 19 to 56, the East Bay Times reported. The perpetrators remained at large.

There appeared to be no limit to the age or vulnerability of the people at risk of being gunned down. Not even a week before the Monterey Park shooting, a 10-month old infant had been shot to death at home in Goshen, a small town in central California, in a shooting that left six people, across five generations of one family, dead.

A 72-year-old woman had been shot in her sleep. Sixteen-year-old Alissa Parraz and her son Nycholas had been found together in a ditch outside their home, where it appeared they had been trying to flee the attack. All were shot in the head.

Samuel Pina, Elyssa’s grandfather, said the family was in shock: “It comes in big waves.”

The gunmen in Oakland and Goshen were still unidentified and at large.

Officials said the Half Moon Bay shooter drove himself to a local sheriff’s station following the slaying, where he was arrested in the parking lot. The 72-year-old who had opened fire at the California dance hall shooting had died by suicide after being pulled over by police the morning after the shooting.

But even in communities where the killers had been identified, and no longer posed a danger, there were still more questions than answers about the sudden violence, and what might have prevented it.

“In the end, there are simply too many guns in this country. And there has to be a change,” Dave Pine, a local lawmaker in San Mateo county, said on Monday, in the wake of the mushroom farm shootings.

California, the largest US state and one of the world’s biggest economies, also has the country’s strictest gun laws. In 1989, it became the first state in the nation to ban military-style assault weapons.

The state’s per-capita gun homicide rate is lower than the US average, and sharply lower than many Republican-majority states, like Louisiana and Mississippi, which have much more permissive gun ownership laws.

But even California’s Democratic supermajority, which has continued to pass a wide range of new gun regulations, can only do so much in a country where gun rights are fiercely protected. Gunmakers have produced new, military-style weapons that comply with the letter of the law on California’s assault-weapon bans, while functioning in very similar ways to the original weapons. More conservative states with more permissive gun and ammunition purchasing laws, like Arizona and Nevada, are only a short drive away. Police departments in the state have been confiscating an increasing number of “ghost guns”, home-built weapons without serial numbers.

At the federal level, gun rights absolutists continue to gain political power in the courts.

The US supreme court’s new pro-gun majority, fought for by the National Rifle Association and secured by Donald Trump, has already expanded the legal scope of the second amendment, which they defined last year as protecting the right of citizens to carry guns in public for self-protection. California is now being forced to rework its gun control statutes to comply with the new constitutional standards.

While some Californians continue to call for even tighter gun laws, moments of crisis, including high-profile shootings, also fuel gun sales. Firearm purchases surged in California during the early months of the Covid-19 pandemic, with an estimated 5 million Americans nationwide becoming first-time gun owners in 2020 and 2021.

Amid an increase in anti-Asian hate crimes, there has been a striking increase in the number of Asian Americans buying guns to protect themselves.

Community anti-violence programs exist across the state, many of them focused on identifying and working with potential perpetrators of gun violence. But these local programs are often understaffed and overstretched.

“We have solutions that we know work. But they’re not funded,” said Dr Joseph Griffin, executive director of Youth Alive! in Oakland, which assists survivors of violence.

‘We need to come together’

The onslaught of back-to-back tragedies has a cumulative impact on California residents, creating a sense of fear and despair, especially for people who see themselves in the victims that were targeted, advocates said.

Hollins, a San Francisco native who lost two brothers to violence, said the news cycles can be particularly traumatizing for people who previously survived violence or have relatives who were killed in shootings, and noted that the recent killings by police in the state also compounded the stress. “Some of us develop a level of compassion fatigue doing this work. It’s not a lack of compassion for the individuals who have been harmed, but there’s only so much you can process and hold from all these experiences. And so folks sometimes dissociate, and it can lead to this feeling of hopelessness.”

Still, Hollins said she hoped to see unity across communities and racial lines, and resources are provided for those affected to recover: “I don’t want these conversations to further fuel a political debate about which communities are more deserving or more responsible for the violence that we see happening. We obviously have a systemic and societal issue that crosses all communities and is affecting all of us.”

Some survivors faced more barriers in getting help than others, local lawmakers said.

The Half Moon Bay shooting victims were Chinese and Latino, officials there said. Half Moon Bay’s vice-mayor, Joaquin Jimenez, said that some of the farm workers who had been targeted were undocumented, which might make them more hesitant to seek mental health counseling or other services.

“There’s a lot of fear,” Jimenez said. “For them to come forward to ask for help is going to be very difficult.”

Nicole Lee, executive director of Urban Peace Movement, a racial justice group in Oakland, said that after mass violence, the priority is often to expand police’s presence: “When people are scared, they want a quick fix … But law enforcement can’t be at every block at all times, and in many instances they can’t stop these situations. So how do we make interventions that really keep us safe?”

Lee, who is Chinese American, said it was also stunning to learn that the suspects in two separate mass shootings were older Asian men. While it was too soon to draw conclusions about what led to the violence, she noted that many Asian Americans in older generations may be grappling with unaddressed trauma, including from surviving war.

“I don’t think we are attending to the mental health needs of immigrant communities and Asian communities, especially when there are language differences and cultural differences,” she said. “Not all cultures feel comfortable talking about trauma and mental health. And particularly … with elders, there are often pressures to not talk about these things.”

Lee hopes that will shift: “People need to be listened to, and really need space to come together and support one another.”