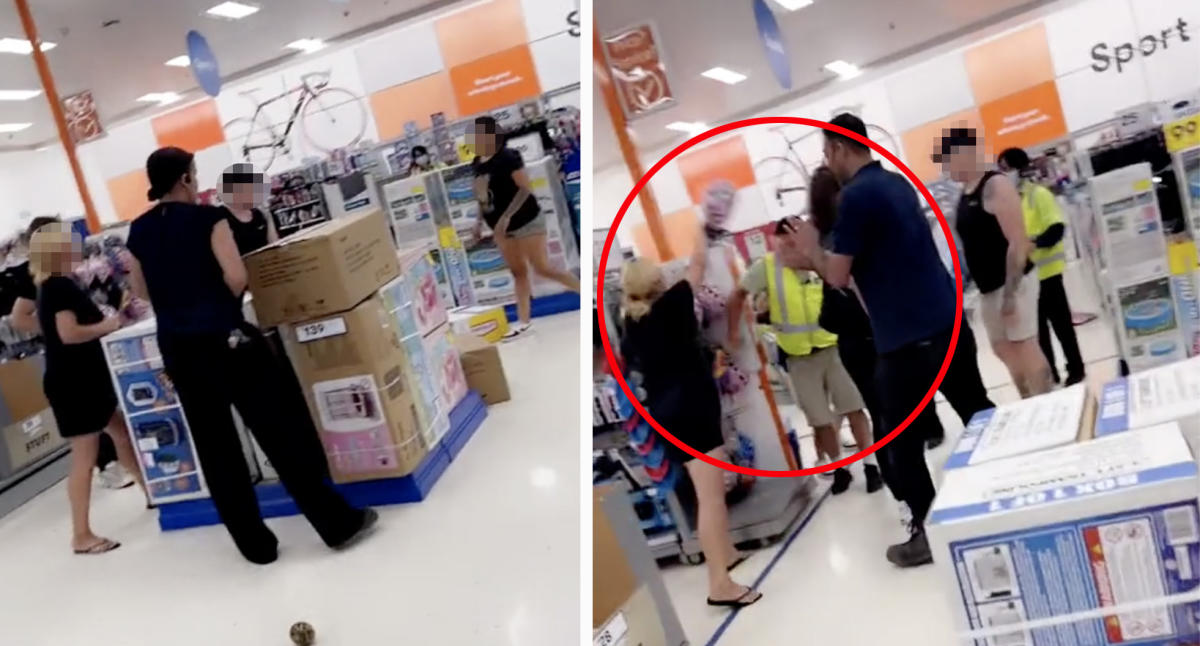 A fight between shoppers in Big W has been caught on camera as staff try to break up the brawl as it unfolds in the middle of the store.

In the first of two clips, two young women can be heard screaming at each other in the aisles between the toy and sporting departments.

A man filming the altercation can be seen making his way through the store with his little boy in tow, as he tries to capture the wild exchange on camera.

In the second video, the fiery encounter has escalated as the women shove a box on a display across at each other. In the foreground, a Big W employee can be seen trying to hold on to the items.

“I’m going to kill you,” the dark haired woman screams at the blonde shopper as she walks backwards, guided away from the scene by a man in a black top.

As the yelling and obscenities continue, the Big W staff member bends down to pick up products scattered on the floor while two people in yellow hi-vis vests appear.

In the background, the blonde woman can be seen following the other before hurling items over the aisle at her, as others try to seperate the two.

The clip ends with the pair closer to the camera as the blonde woman begins throwing bike helmets over staff members at the other woman.

While it’s unclear what triggered the ugly scene, the two videos have racked up more than 329,000 views. Most were left speechless as the “gross” behaviour.

“Damn, I got no words bro,” one person wrote. “The fact they have no care [that] there are kids and families and elderly around is disgusting,” another added.

However some saw the funny side. “I love the sound of Australian wildlife,” one user mocked. “Just an average day at your local Big W,” another commented.

“Total role models,” someone else said. “I would have grabbed a chair and some popcorn.”

“Two Karens in a battle to the death,” joked another.

Yahoo News Australia reached out to Big W for comment on Thursday morning but hadn’t heard back at the time of publication.