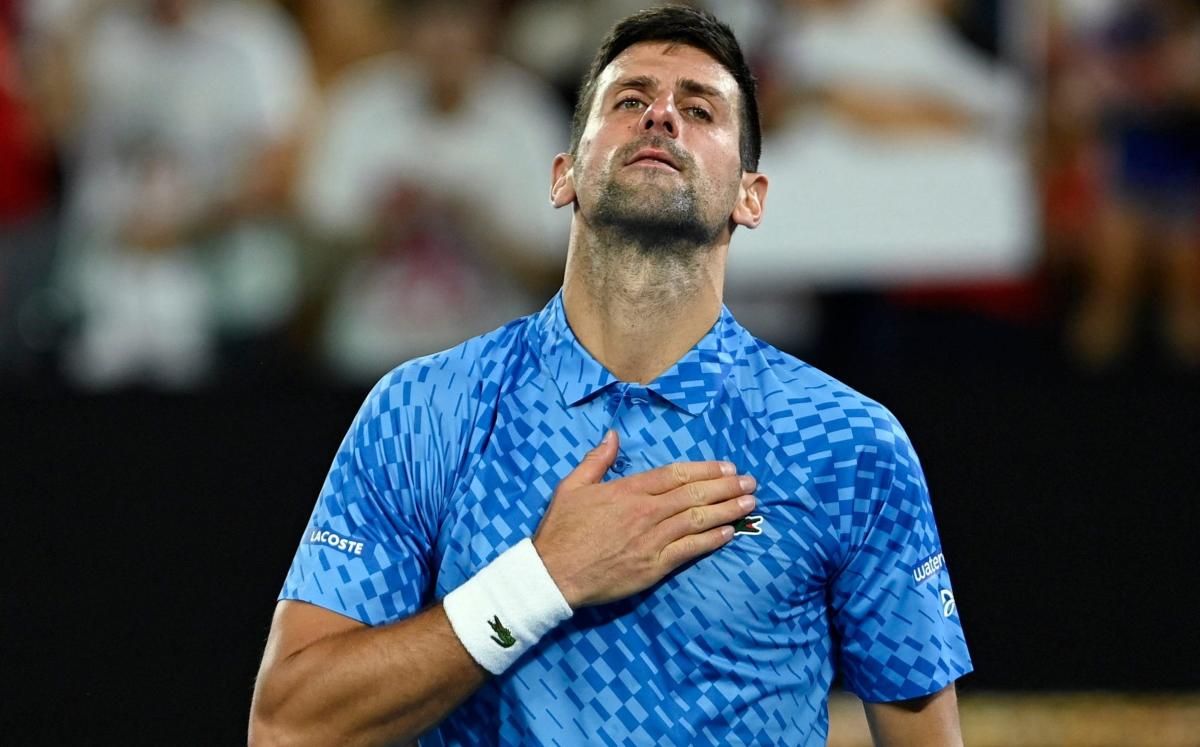 Firmly in control, Djokovic opens up with an ace, and skips to 30-love. But Rublev takes a chance with a sterling return that Djokovic is too quick to respond to, his effort landing in the net. He nets again, forced too deep by Rublev, which levels things.

But his text serve is hit with textbook accuracy and aces Rublev, chains clanking around his neck as he awaits the next. That’s an ace too, and a clean enough hold for Djokovic.

During the break, the front row of Djokovic’s box craned over the edge to speak to him hurriedly. Whatever intel he gleaned, he takes the first point off Rublev, but the Russian comes back to get into the points with a well-controlled, streaking forehand, impressive in the face of the wind.

Rublev lets Djokovic in again at 40-30, and the Serbian gets to deuce with another barely-believable deep forehand which only just meets the baseline. A whippy serve that yields an unfocused return puts Rublev ahead, but only for a moment: Djokovic’s next return is so clean and commanding, Rublev falters.

Djokovic has his second break-point of the match, and this time, he makes good on it. A crucial opportunity at 40-15 squandered by Rublev.

Simon Briggs is at the Rod Laver Arena

Good evening from Melbourne. Conditions here are quite cool and there’s a gusting, inconsistent breeze that becomes quite strong at times. It’s not a bad evening for Rublev, whose flat hitting style doesn’t require too much spin or bounce (both more easily available in warmer weather). Or it wouldn’t be, if he was playing anyone but the King of Rod Laver Arena.

Another double fault for Djokovic, this time to bring Rublev in at 30-15, but he doesn’t let the wobble weaken his mettle, forcing Rublev into a shaky return with that all-too-dominant serve.

He wins the game handily, with minimal fuss.

As if to reassure the number-four seed, Rublev matches him with an opening double fault. The point that follows is a mind-bendingly intense rally, with Djokovic directing the majority of the 25 shots, first with a confident backhand, then forehand. But Rublev holds his own, and wins the point with a springing forehand.

Rublev’s forehand can prove unmatchable, and it gets him ahead now, 40-15. But when he finds the net, there’s a little cause for concern: Rublev’s second serve is much less of a weapon, and Djokovic deals with it cleanly. Djokovic reaches deuce with an inch-perfect, dramatic-looking lob, which Rublev streaks to return but can only do so backwards, and clumsily. He can scarcely believe Djokovic’s shot landed on the right side of the baseline.

With Djokovic at advantage, Rublev claws back deuce with a steely backhand-forehand combination. He goes ahead after Djokovic mishits at the back of the court, and avoids the early break after his opponent plays too quickly, wildly sending the ball out to the stands.

Djokovic opens his service with a double fault, which sends a murmur of surprise around the court. Only his 13th double fault of the tournament, and an inauspicious way to open up a quarter-final. But Djokovic gets off the mark moments later, after Rublev underhits his return into the net.

He reasserts parity with a scything ace, then forces Rublev to hit too deep off the back of a 197kph serve. But at 40-15, Rublev serves up a whip-smart forehand that bypasses Djokovic entirely.

But when drawn into the match’s first rally, Rublev under pressure finds the net.

He elects to serve, and the pair begin their warm-ups. A gentle, but persistent, breeze, ruffles their shirts, Rublev’s curls, pinned back with an electric blue headband.

On his own, Rublev is pacing neatly back and forth, whereas Djokovic is nowhere to be seen; he’s all too happy to let his opponent wait for him.

Eventually, Djokovic emerges, and stalks Rublev, clad in electric blue, down the tunnel. The Russian is first to step out, and roundly applauded, but nothing can match the cheers and excitement for Djokovic, so popular once again at this competition.

Can Rublev stop a player that seems unstoppable?

One Nick Kyrgios, recovering from knee surgery, shared his thoughts whilst watching Djokovic take on his compatriot De Minaur. Well, quite.

After wrapping up his quarter-final match against a retiring Sebastian Korda, Khachanov wrote ‘Atrsakh stay strong!’ on a TV camera, in solidarity with Armenian protests for independence in the embattled Nagorno-Karabakh region.

“I have Armenian roots,” said Khachanov on Tuesday, after defeating Sebastian Korda to move into the semi-finals. “From my father’s side, from my grandfather’s side, even from my mum’s side. To be honest, I don’t want to go deeper than that. I just wanted to show strength and support to my people.”

Elsewhere in the men’s quarter-finals

This morning, Ben Shelton fell to compatriot Tommy Paul in a tightly-contested match which went to four sets; their all-American battle, and Korda’s inclusion, made this the first grand-slam quarter-finals featuring three US men for the first time in 18 years.

One step closer to his 10th title Down Under?

Djokovic already holds the record for the most Australian Open wins, but has a statement-making tenth win in his sights, having cruised through the draw to banish soured memories of last year’s deportation spectacle. His blistering 6-2, 6-1, 6-2 victory over home favourite Alex De Minaur en route to today’s match sets him up as the most-likely contender, and although there were early doubts over his fitness – Djokovic has played through the competition with heavy strapping on his left thigh – he said in his on-court interview after beating De Minaur that he felt ‘great’.

“I didn’t feel anything today,” Djokovic said. “Today was great. I keep on going, I don’t want to celebrate too early. I was feeling really good in the first match, second one not so great, so I know things can change really quickly, I don’t take anything for granted.”

In a later Serbian press conference, he blasted those who had doubted that he was legitimately injured, adding that he was the only player subjected to these kind of rumours.

“Only my injuries are questioned. When some other players are injured, then they are the victims, but when it is me, I am faking it. It is very interesting… I don’t feel that I need to prove anything to anyone.”

Rublev, too, has had a confident journey thus far in Melbourne, his greatest test coming in his fourth-round match against Holger Rune which went to five sets, but Rublev clinched the victory in time, 6-3, 3-6, 6-3, 4-6, 7-6 (tiebreak 11-9).

Seeded only one place below Djokovic at this year’s competition, the Russian player – competing under a neutral flag – has beaten Djokovic once during their previous three encounters.

Stick with us as we bring you all the build-up before the first serve at approximately 8.30am UK time.