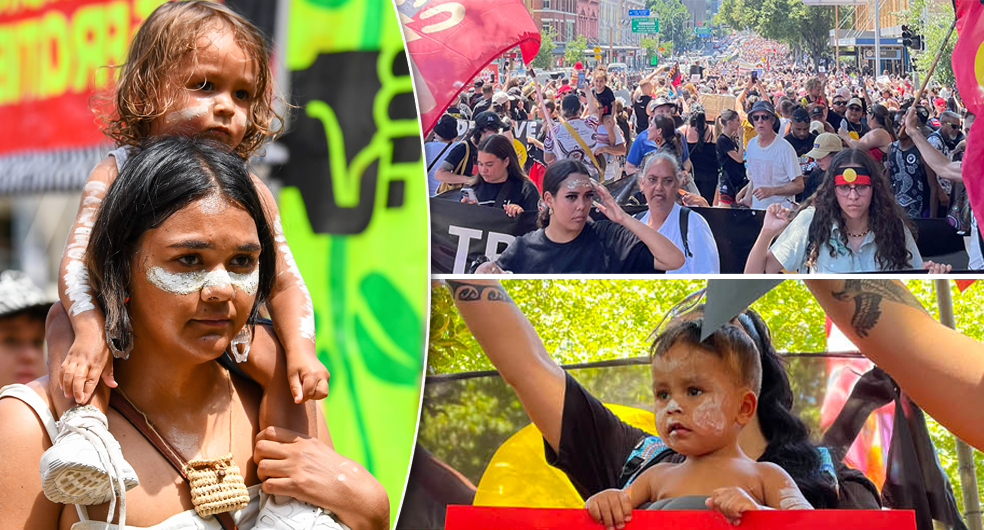 On the official Australia Day public holiday, thousands have gathered across the country to mark the survival of Indigenous cultures.

In Sydney’s Belmore Park, children, elders and the next generation of passionate Black speakers reminded the crowd that sovereignty was never ceded despite the British claiming it as their own on January 26, 1788.

After a welcome to country, chants of “always was, always will be Aboriginal land” echoed as dozens of armed police watched on. One officer, who did not wish to be named, told Yahoo News Australia he was impressed by the crowd and it was the first time he’d seen Indigenous dancing.

The gathering had a clear political edge, with speakers criticising the upcoming referendum to have an Indigenous Voice to parliament. Many said they did not want to be part of a constitution created by white colonisers. “Australia is still a racist country,” one woman said.

Wiradjuri woman and Greens candidate for the NSW upper house Linda June Coe spoke against the referendum, labelling it a “fallacy”.

“White Australia, this is the reckoning – 235 years and we ain’t going nowhere,” she told the crowd.

Others criticised the Albanese government for supporting Santos’s promised coal seam gas mine in Narrabri, which is opposed by the majority of the Kamillaroi nation, as well as many farmers.

In the 31 years since the Royal Commission into Aboriginal deaths in custody, there have been more than 500 additional deaths. One couple told Yahoo News Australia they were in attendance at the protest to remember a friend who had died.

“One of our friends, her brother passed away in custody,” Stefan said.

Michelle, a proud Wiradjuri woman, said she has been attending marches since she was eight years old.

“We were one of the first to march in the land rights and stuff like that so we want to teach our kids to come and march, you know. That’s what it’s all about.”

As temperatures in Sydney nudged 30 degrees, the march kicked off from Belmore Park and snaked through Pitt Street, George Street and Broadway to Victoria Park.

The sea of red, black and yellow brought traffic to a halt as singing and dancing erupted outside Central Station.

Among the hundreds of flags being waved above the crowd was a sad detail – many were flying the tent embassy flag instead of the Aboriginal flag after the Commonwealth took ownership of it last year.

While then-Prime Minister Scott Morrison stated that the flag had been “freed” for Australians, some First Nations people felt it was instead being made the property of the Commonwealth.

Protestors were greeted with a round of applause by those watching cultural performances at Yabun Festival, a celebration of Aboriginal and Torres Strait Islander culture.

Albanese says date will not be changed

Prime Minister Anthony Albanese says the government will not consider changing the date of Australia Day from January 26, but is urging the nation to come together through the Indigenous Voice to Parliament plan.

A referendum on enshrining the voice in the constitution will be held later this year.