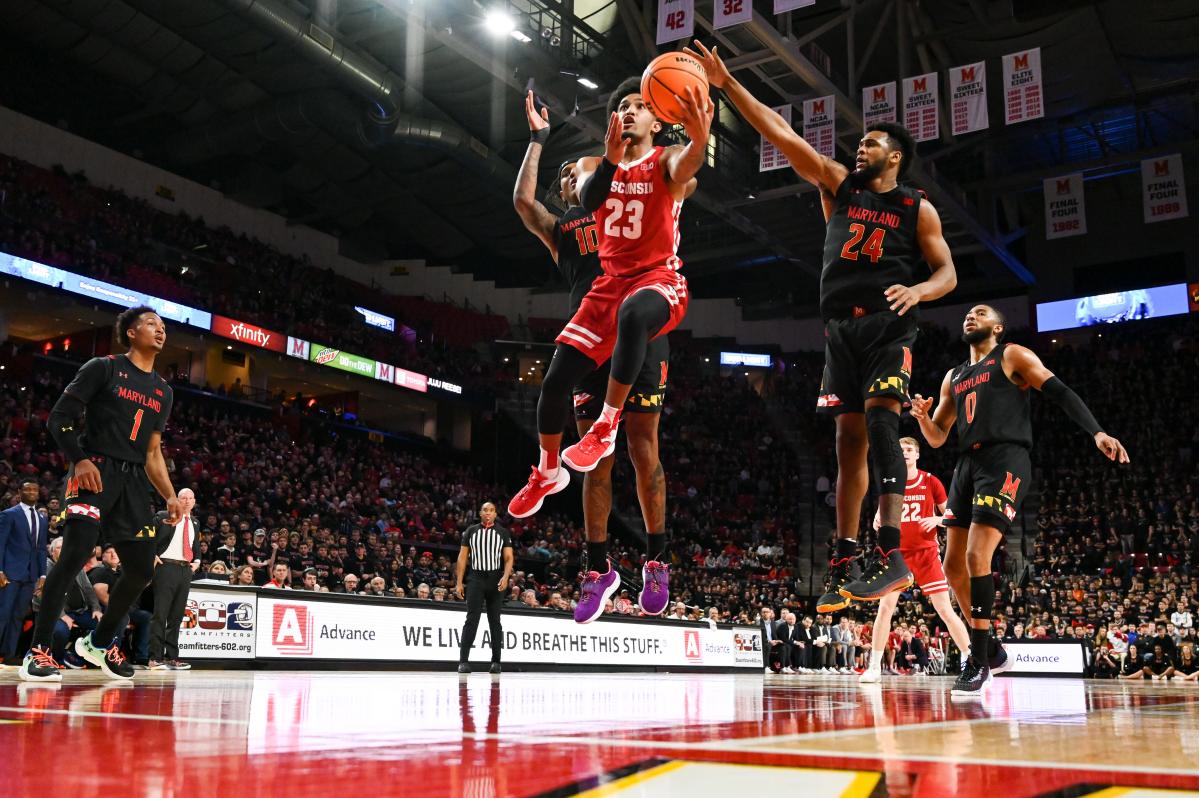 Fix the offense for a night – at least for one half – and the defense becomes the issue for most of the game.

The Badgers scored well in spurts Wednesday night, but their defensive execution was abysmal against a Maryland team that has been nearly perfect at home this season.

The Badgers entered the night limiting foes to less than 43% shooting but Maryland got into the lane area with ease en route to an easy 73-55 victory at the XFINITY Center.

The five losses in six games is the worst stretch since 2020-21, when UW lost five of its last six regular-season games to finish 10-10 in the league.

The Terrapins won the rematch by dominating the paint. UW outscored Maryland in the paint, 24-18, in the teams’ first meeting.

Donta Scott and Hakim Hart combined to make just 5 of 24 shots in the Terrapins’ 64-59 loss in Madison.

That duo combined to hit 11 of 18 shots on Wednesday.

Two days after shooting just 38.6% in a three-point loss at Northwestern, the Badgers started off white hot against Maryland. They hit 6 of their first 7 shots and finished the first half at 47.8%.

They trailed, 32-28, because they couldn’t string together stops and shot just 33.3% in the second half.

Connor Essegian, 2 of 8 from three-point range and 3 of 11 overall at Northwestern, led UW with 19 poinnts Wednesday. He hit 4 of 6 three-pointers and 6 of 12 shots overall.

Tyler Wahl and Steven Crowl added 13 and 11 points, respectively. However, they combined for only six rebounds.

UW was again without guard Max Klesmit, who missed his second consecutive game since taking an elbow to the face in the victory over Penn State.

If you loved scoring, you loved the first few minutes of the game Wednesday.

Reese stared the run with a basket inside. Scott hit a free throw when Davis was called for a flop trying to draw a charge. Young scored on a drive, Scott hit a three-pointer, Young scored again and Reese scored inside to push the lead to nine.

UW, which went scoreless on five consecutive possessions, ended the drought with a basket inside from Wahl. After a Maryland turnover, Crowl hit a three-pointer to close the gap to 32-28 with 21 seconds left.

Maryland called a timeout with 13.4 seconds left. UW had three fouls to give and used them all to cut the time down to 4.7 seconds left and Young missed a three-pointer at the buzzer.

The Terrapins were white hot to open the second half and UW couldn’t keep pace.

Maryland got into the lane at will and hit its first eight shots of the half to build a 49-36 lead with 15:09 left.

That forced Gard to call a timeout and try to stop the bleeding.

UW never got closer than nine points the rest of the way.

Next up for UW is a Saturday home game against a hot Illinois team that is 5-4 in the league, 14-6 overall and overwhelmed UW in the teams’ meeting in Champaign.

What holes does Gard try to plug next?