The government has been torn apart online after a screeching U-turn on overhauling the standards system and getting Tory MP Owen Paterson off the hook.

Social media users mocked ministers after Commons Leader Jacob Rees-Mogg was deployed to confirm they had backtracked in the wake of furious opposition.

Some were furious at the move and blasted the Tories for the ‘stupid’ decision to hold a vote yesterday in the first place.

But others subjected the ruling party to brutal mockery, with one asking if people are suffering from whiplash from the constant U-turns.

The PM watered down the plans to overhaul the disciplinary process for MPs and review Mr Paterson’s alleged breach of the rules after outrage this morning.

Mr Rees-Mogg said he would seek ‘cross-party’ changes to the system after Labour and other opposition parties refused to take part in a ‘corrupt committee’.

He suggested any changes may not ‘apply retrospectively’ after the Government came under intense criticism for blocking Mr Paterson’s immediate suspension.

But later the MP for North Shropshire took things into his own hands by quitting as a politician to be ‘outside the cruel world of politics’. 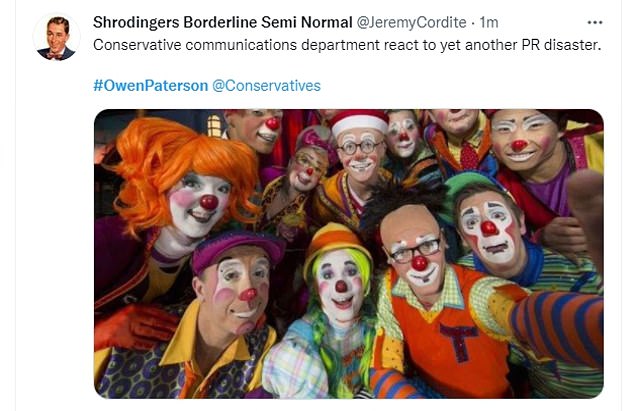 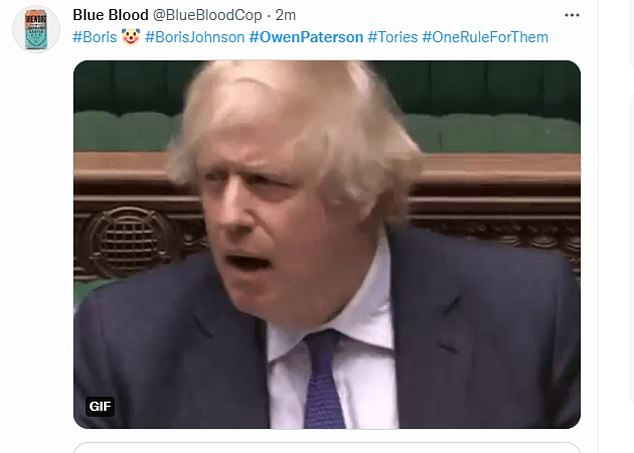 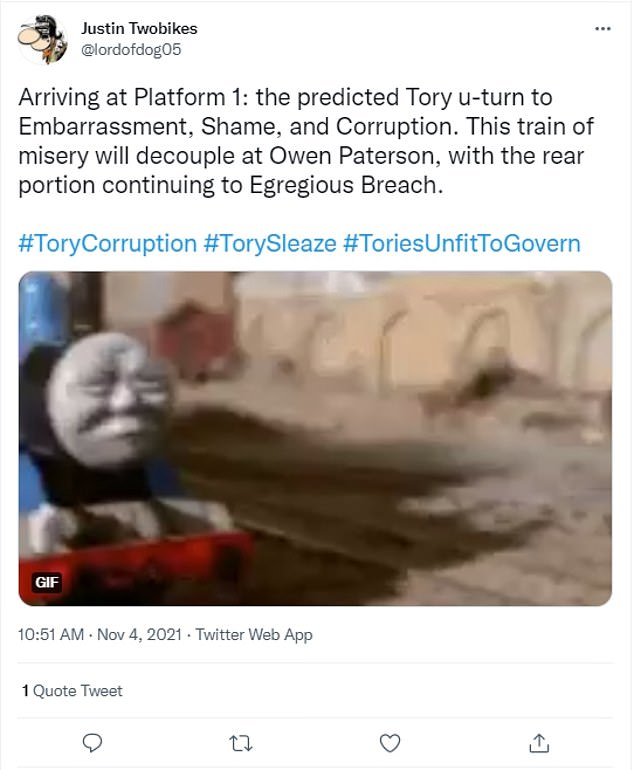 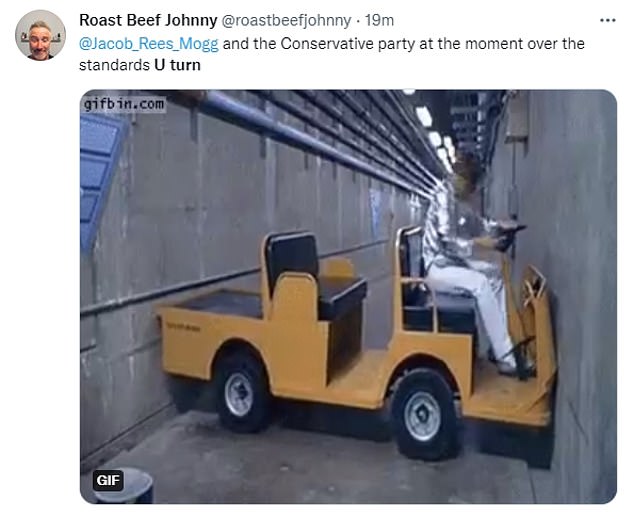 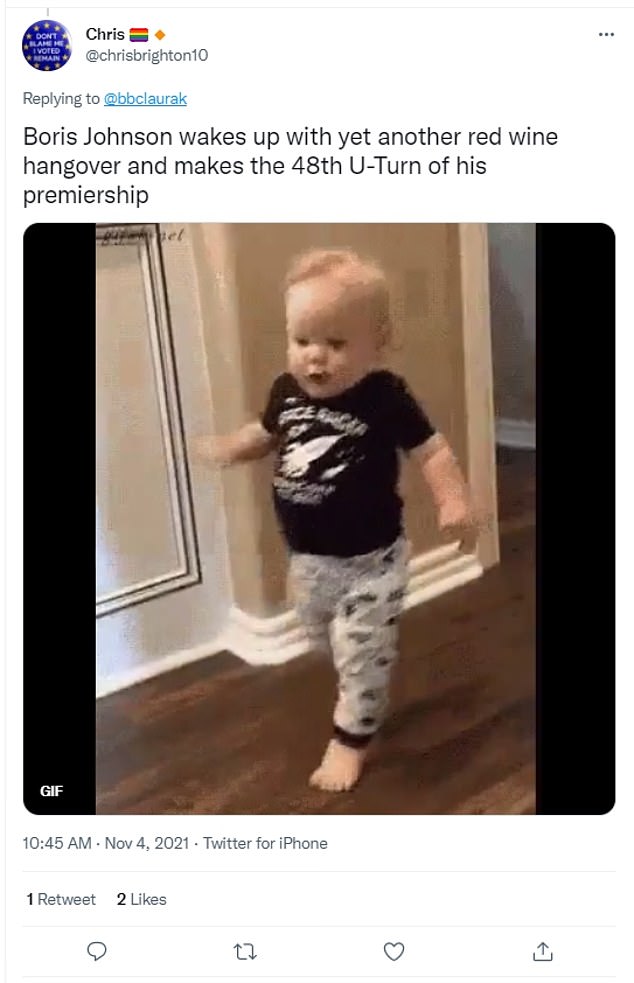 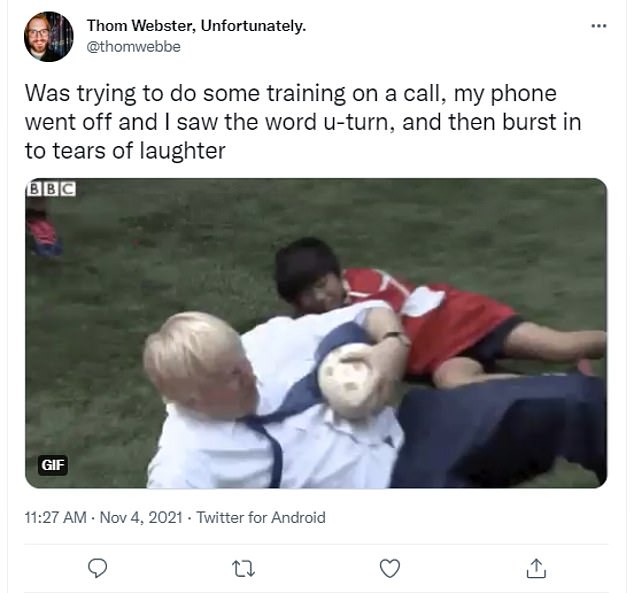 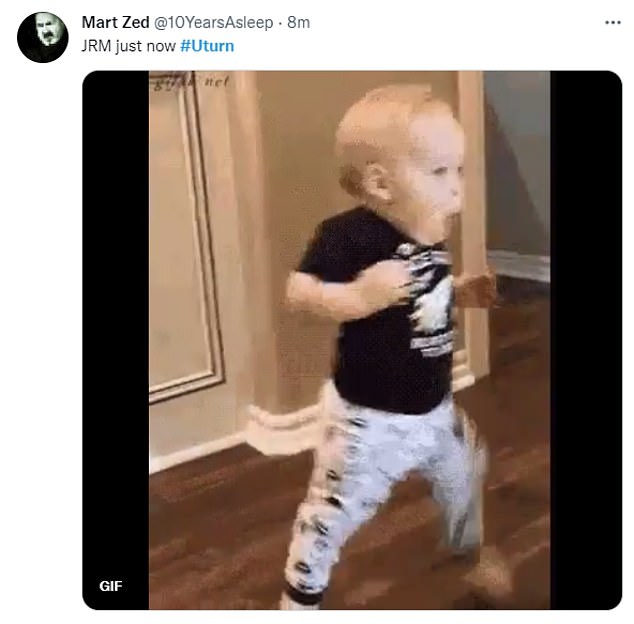 Social media users were unforgiving online and panned the government for the embarrassing volte-face.

Another person wrote: ‘Boris Johnson wakes up with yet another red wine hangover and makes the 48th U-Turn of his premiership.’

One man said: ‘A government U-turn after public backlash to another stupid decision.’

A woman said online: ‘Arriving at Platform 1: the predicted Tory U-turn to Embarrassment, Shame, and Corruption.

‘This train of misery will decouple at Owen Paterson, with the rear portion continuing to Egregious Breach.’

One put: ‘Was trying to do some training on a call, my phone went off and I saw the word u-turn, and then burst in to tears of laughter.’

And one more added: ‘So with this latest U-Turn, does this mean the Tory party are giving up on sleaze?’ 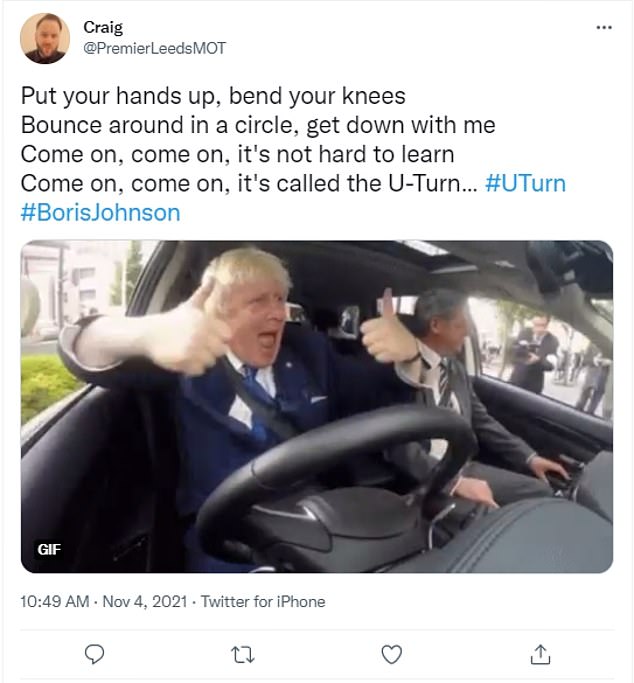 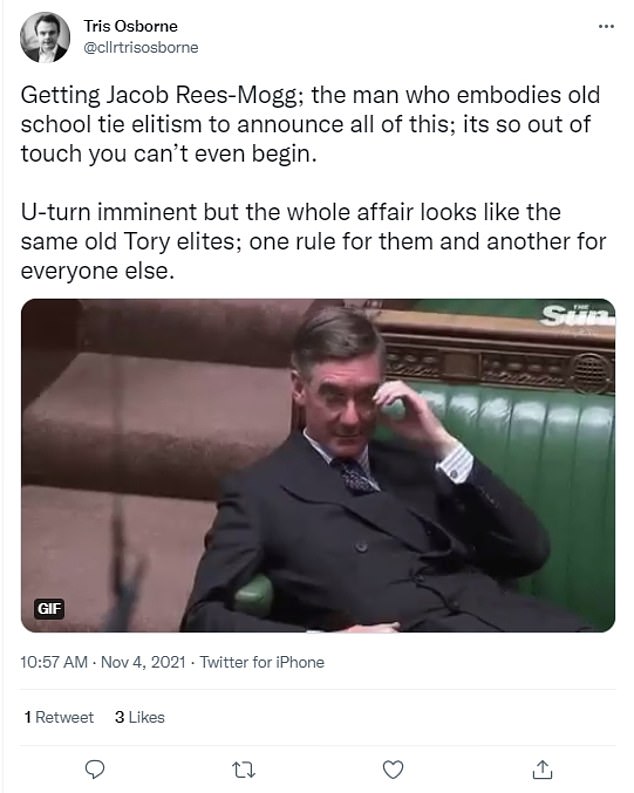 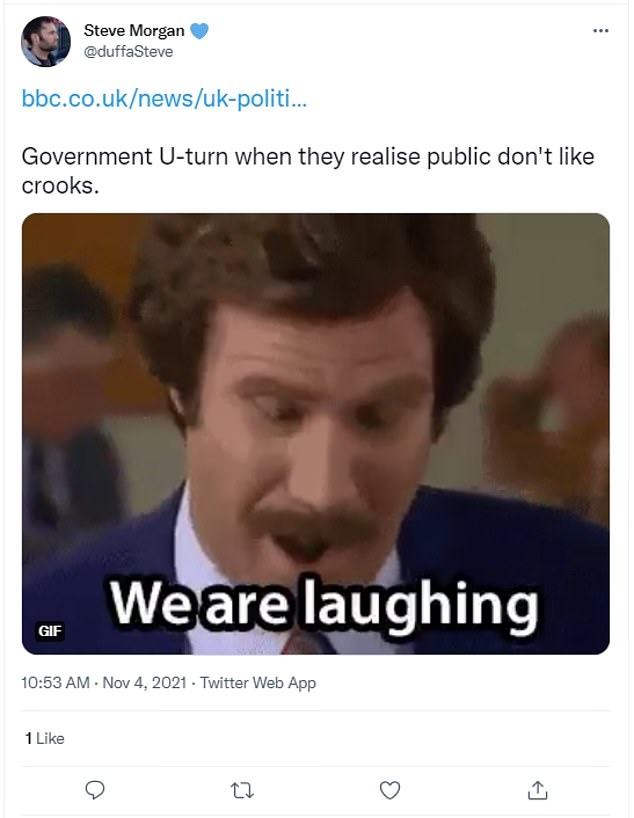 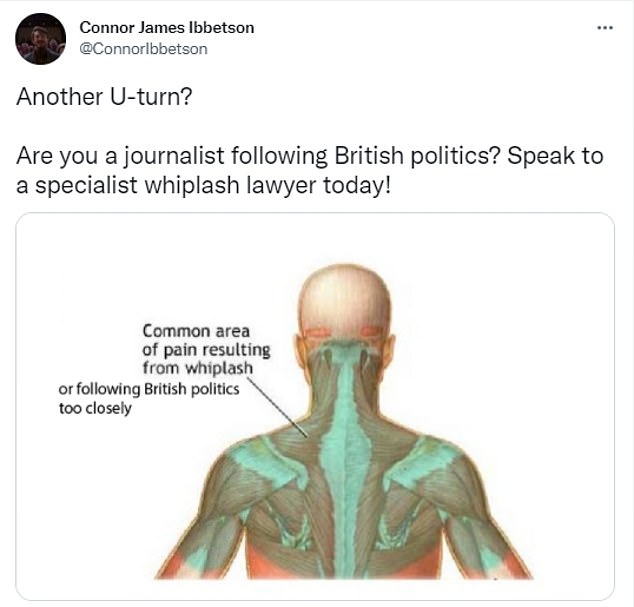 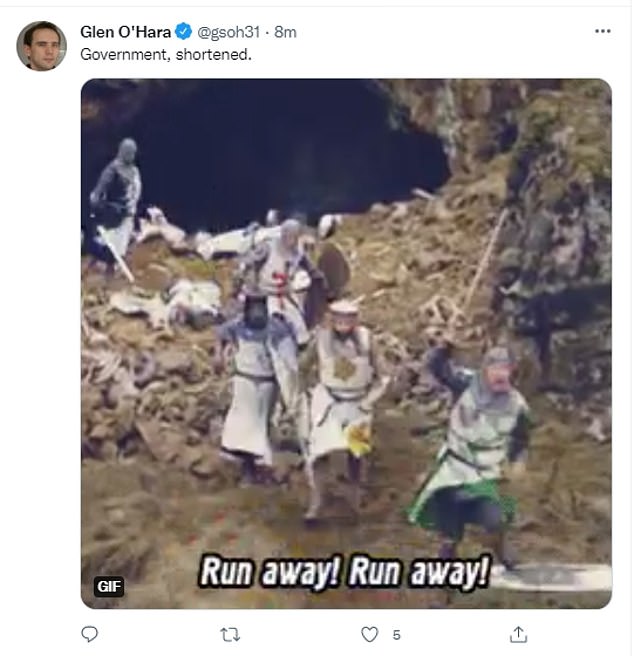 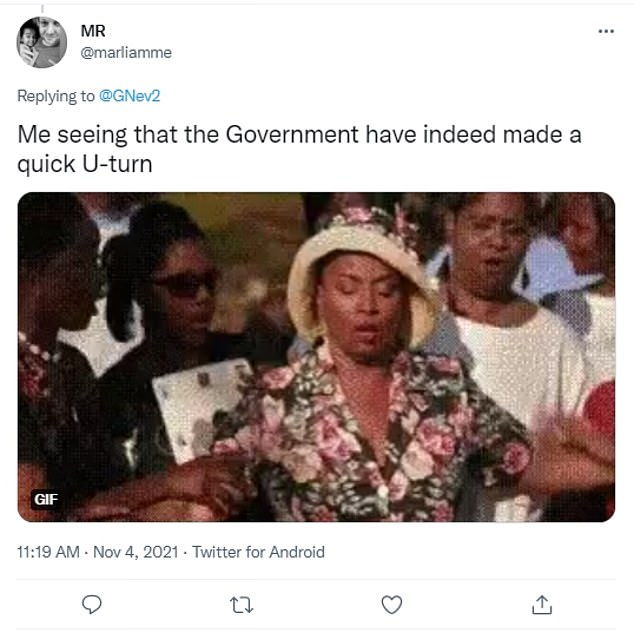 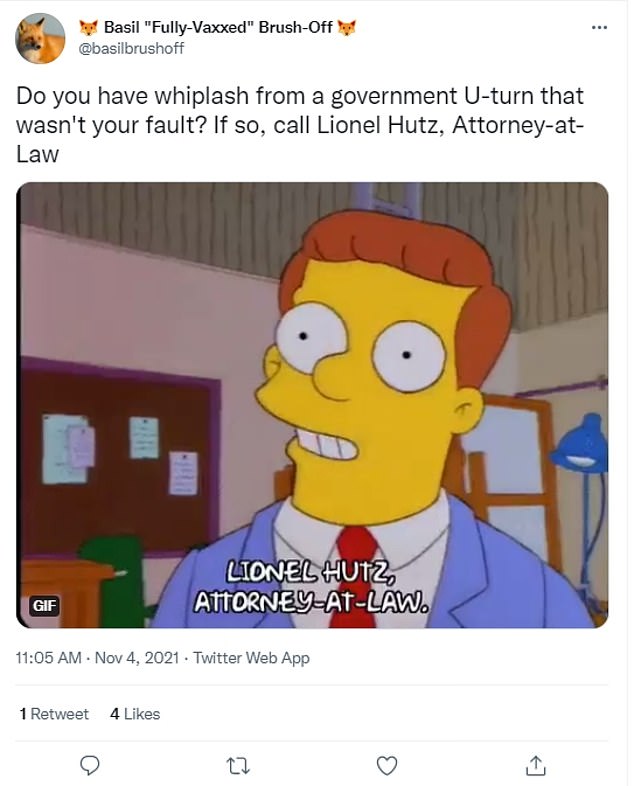 Mr Rees-Mogg’s comments to MPs came as an ethics adviser to the PM described Wednesday’s votes as a ‘very serious and damaging moment for Parliament’.

Lord Evans, chair of the Committee on Standards in Public Life, said plans for a Tory-led review was ‘deeply at odds with the best traditions of British democracy’.

The Commons Leader recognised standards must be reformed on a cross-party basis as he acknowledged ‘that is clearly not the case’ with the proposals.

He said: ‘While there is a very strong feeling on both sides of the House that there is a need for an appeals process, there is equally a strong feeling that this should not be based on a single case or apply retrospectively.

‘I fear last night’s debate conflated an individual case with the general concern. This link needs to be broken.

‘Therefore I and others will be looking to work on a cross-party basis to achieve improvements in our system for future cases.

‘We will bring forward more detailed proposals once there have been cross-party discussions.’

Despite his measured tone, there were jeers from across the House and social media users continued to pile on the U-turn.

One person joked: ‘Another U-turn? Are you a journalist following British politics? Speak to a specialist whiplash lawyer today!’

A Labour councillor wrote: ‘Getting Jacob Rees-Mogg; the man who embodies old school tie elitism to announce all of this; its so out of touch you can’t even begin.

‘U-turn imminent but the whole affair looks like the same old Tory elites; one rule for them and another for everyone else.’ 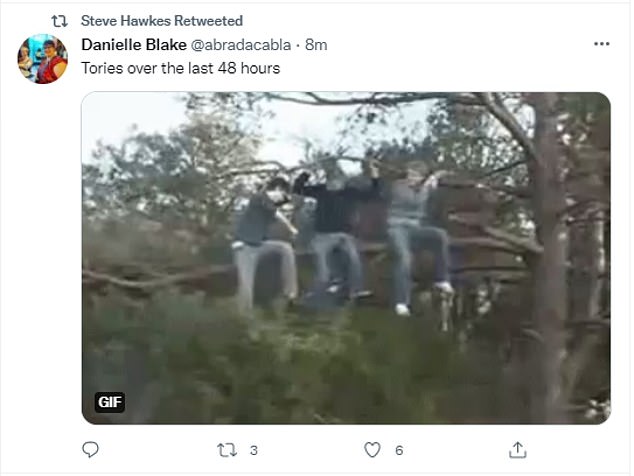 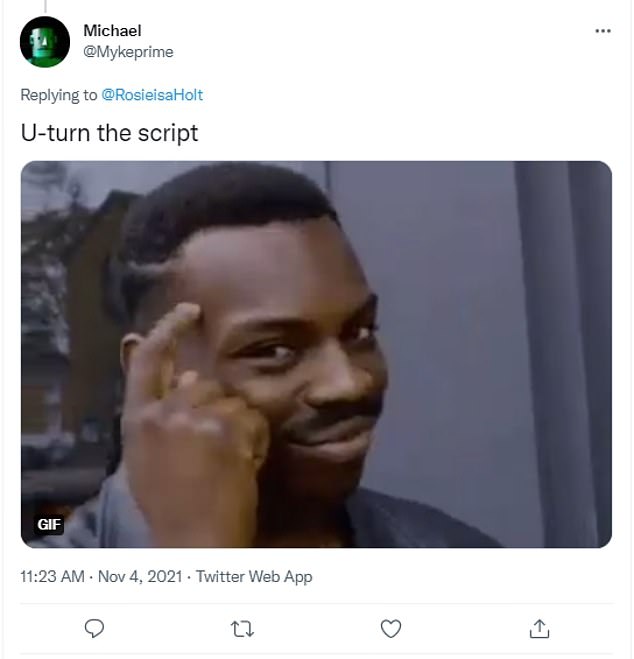 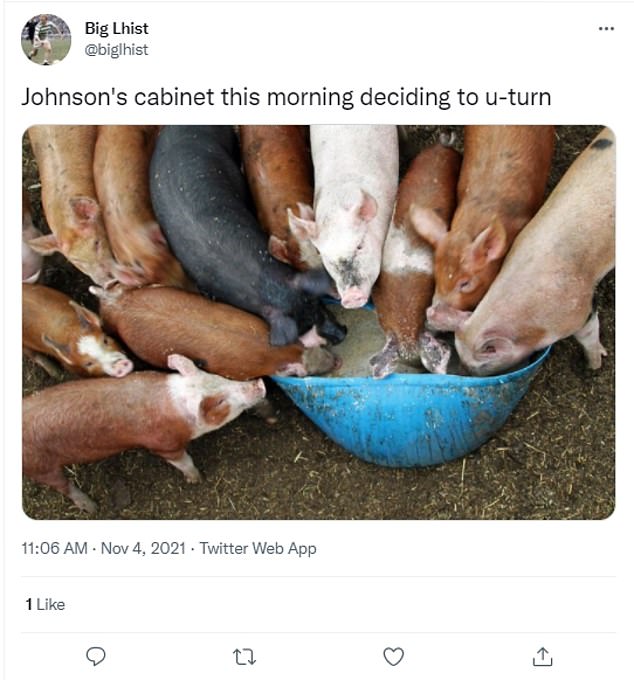 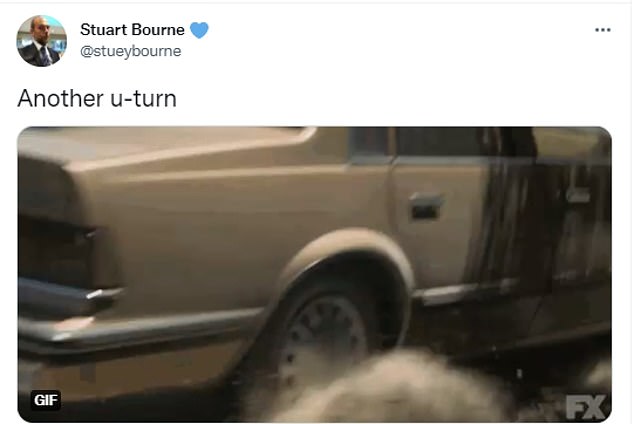 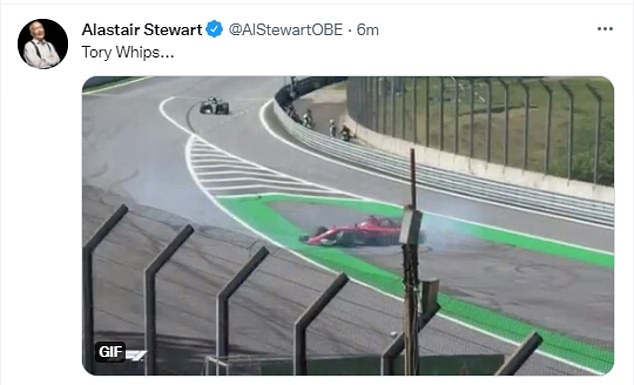 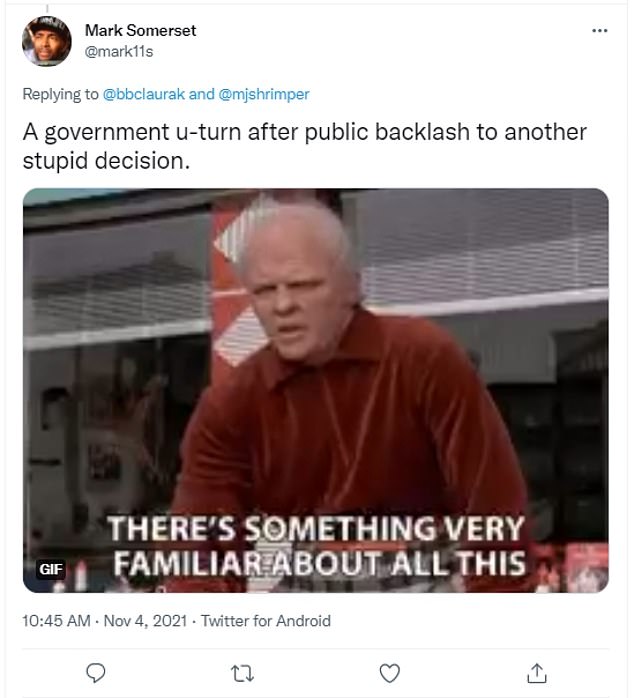 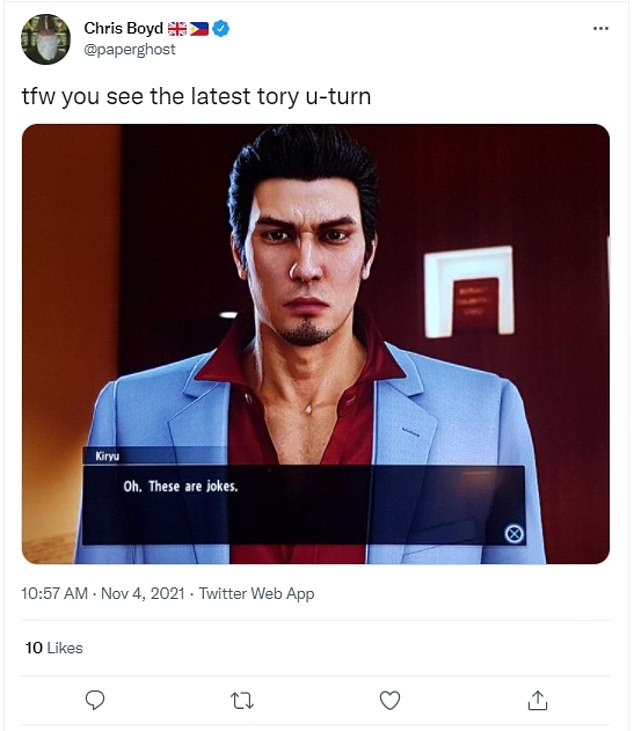 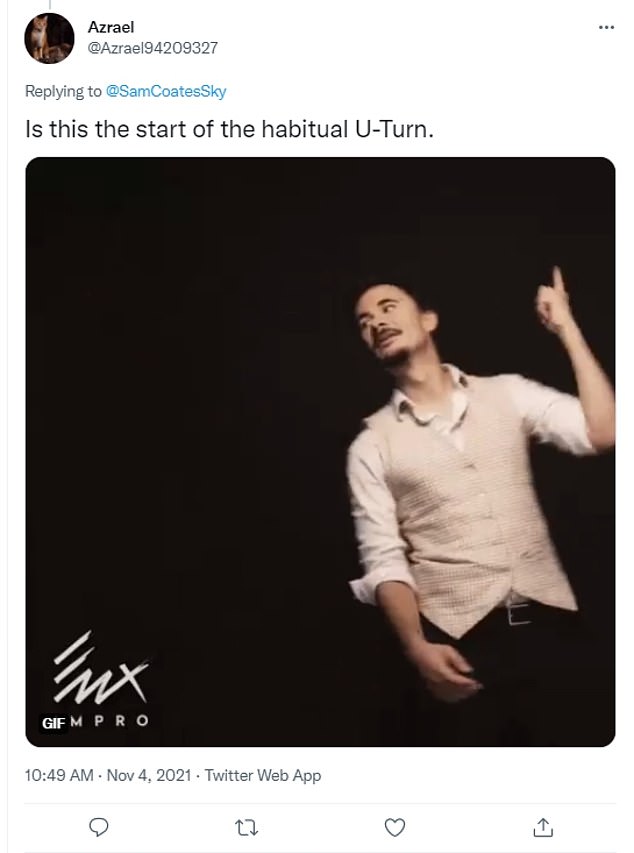 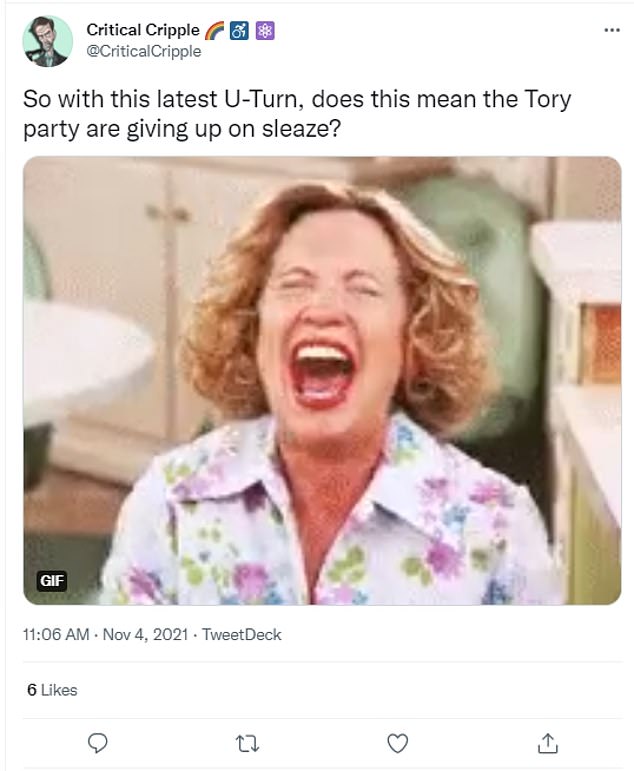 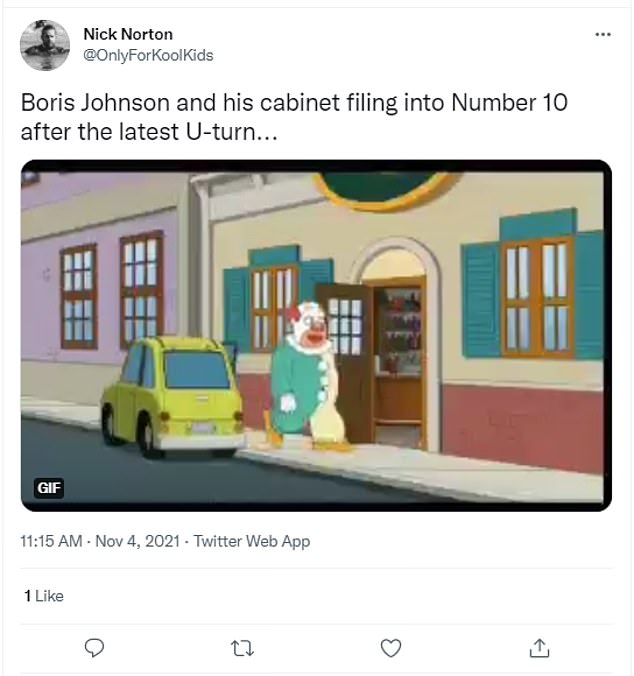 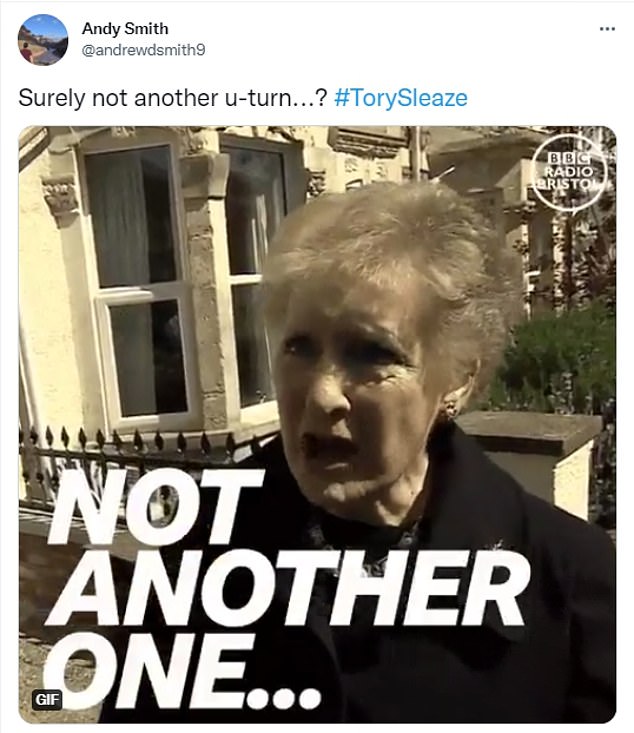 The move had meant a motion on suspending Mr Paterson for 30 days for lobbying rule breaches is now set to be brought before the House again.

The PM had smashed convention by ordering his party to oppose the conclusions of the standards watchdog.

But the amendment ‘pausing’ the process and calling for a reform of the sleaze rules only passed as he was hit with a major revolt from backbenchers.

The block sparked chaos and left the existing system for regulating MPs’ behaviour in tatters as Opposition parties vowed to boycott plans to agree a new one.

Mr Paterson was found to have committed an ‘egregious’ breach of standards rules by directly advocating for two companies from which he pocketed some £500,000.

He denies wrongdoing, saying he would do it all again, and called for standards commissioner Kathryn Stone to resign.

This was endorsed during media rounds by Business Secretary Kwasi Kwarteng just hours before the volte-face.

But later in the day Mr Paterson dramatically quit as an MP and said he wanted to ‘remain a public servant but outside the cruel world of politics’.

He said: ‘This is a painful decision but I believe the right one. The last two years have been an indescribable nightmare for my family and me.

‘My integrity, which I hold very dear, has been repeatedly and publicly questioned.

‘I maintain that I am totally innocent of what I have been accused of and I acted at all times in the interests of public health and safety.

‘I, my family and those closest to me know the same. I am unable to clear my name under the current system.’