Kamala Harris hit back at claims she is being misused as vice president, saying she doesn’t feel like she’s being under utilized by President Joe Biden and his team.

‘No. I don’t,’ she told ABC’s George Stephanopoulos in an interview that aired on Good Morning America Thursday morning. ‘I am very, very excited about the work that we have accomplished but I am also absolutely, absolutely clear-eyed that there is a lot more to do and we’re going to get it done.’

She rattled off a list of her accomplishments, including the passage of the bipartisan infrastructure bill, her recent trip to France, her work with members of Congress and her presiding over the Senate as she defended her job as vice president.

Harris’ interview came amid reports of chaos in the vice president’s office and frustration among West Wing staff with her and her team, which the White House has vigorously pushed back on, denying Harris is being sidelined as her poll numbers sink. ‘

She also stressed her strong relationship with Biden and dismissed her low approval ratings which plummeted to 28% in a USA TODAY/Suffolk University poll of registered voters earlier this month.

‘Polls, they go up, they go down,’ Harris said. ‘But I think what is most important is that we remain consistent with what we need to do to deal with the issues that we’re presented with at this moment.’

She also said she and Biden have not spoken about the 2024 presidential race.

‘Absolutely not,’ she said when Stephanopoulos asked if Biden told her he would seek a second term. 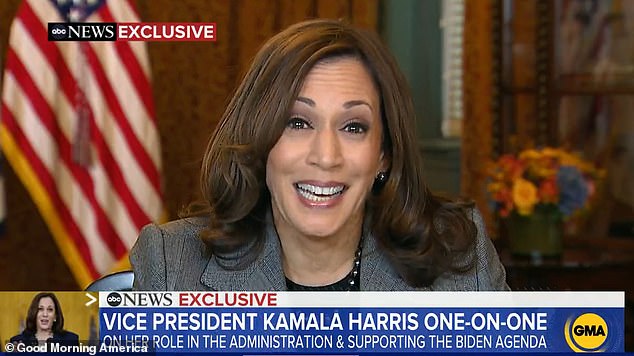 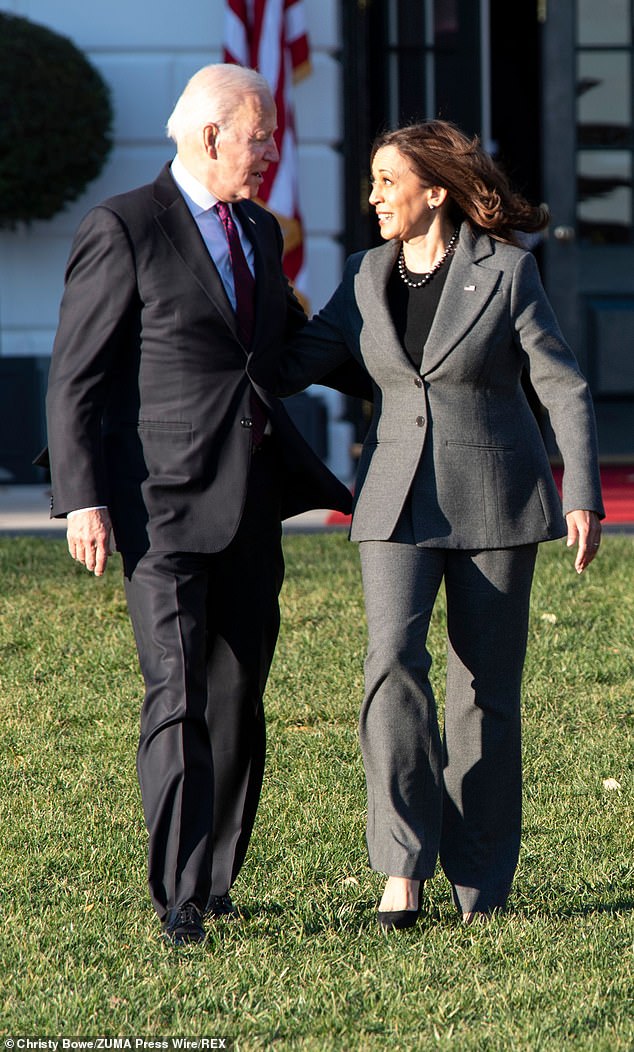 In the interview with ABC News, Vice President Harris stressed her strong relationship with President Joe Biden – the two are seen above Monday at the signing of the bipartisan infrastructure bill

The White House has gone full throat with their defense of her after a CNN report claimed Biden was distancing himself from Harris because of her sliding poll numbers while the vice president felt isolated and frustrated with being given some of the most difficult issues for the administration in her portfolio.

And, in a troubling sign for Democrats, Biden’s approval rating dropped to 36 per cent in a new poll out Thursday and most voters said they want to see Republicans take control of Congress.

The new numbers – from a Quinnipiac University Poll – indicate a level of frustration among voters with the party in power as the country prepares for next year’s midterm election.

Harris and Biden put on a show of force at Monday’s signing of the bipartisan infrastructure bill. The two walked out onto the South Lawn together and exchanged hugs.

The president has publicly said he intends to run again. And there has been anonymous chatter among Democrats that, if he does, he should consider replacing Harris. There’s additional speculation that if he doesn’t run again, Harris would not be the strongest contender to replace him. Some have suggested Transportation Secretary Pete Buttigieg would be a better candidate for the nomination.

Biden, however, did not name either Harris or Buttigieg as the person in charge of implementing his infrastructure plan and watching where the dollars go – a role he noted he played for Barack Obama in 2009 for stimulus money distribution. He named former New Orleans Mayor Mitch Landrieu.

Harris did not answer about the president’s 2024 plans the first time Stephanopoulos asked her, however. He had to press her a second time on the issue.

Harris began her response by listing off what she had done Wednesday – the day the interview was taped – including beginning the day with Biden at the presidential daily briefing and attending meetings.

When Stephanopoulos asked her again, she said definitively it had not been discussed.

Harris also defended her work on the root causes of migration. Republicans have pounded Harris and the administration over the numbers of migrants crossing the Southern border.

‘It won’t be overnight. We can’t just flip a switch and make it better,’ she said.

Senior Biden aides having been trying to pour cold water on the CNN article published Sunday night with background from nearly three dozen sources suggesting that Biden had ‘given up’ on Harris after a poll showed her approval at 28 percent.

Privately, Harris aides complain that she has been set up to fail, and handed a portfolio that is not commensurate with her historic status as the first woman, and first woman of color, to hold the vice president’s office.

‘They’re consistently sending her out there on losing issues in the wrong situations for her skill set,’ said a former high-level Harris aide.

Her aides also complain that on the issues that she has been given control over – such as the border crisis and voting rights – she doesn’t have White House backing to follow through.

In contrast, they say the president has been more vigorous in defending Buttigieg.

At the same time, Biden’s staff are privately disappointed with Harris over self-inflicted controversies, like her ‘awkward’ laughter when asked about visiting the border by NBC’s Lester Holt. 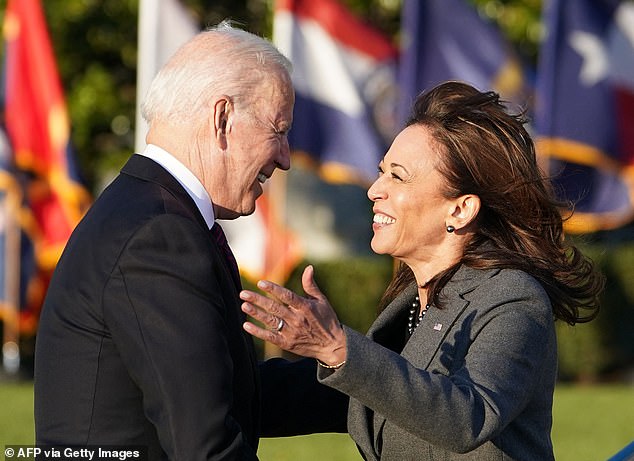 Psaki said on Wednesday evening that Harris is judged with a higher bar being a woman and a woman of color. She slammed the vice president’s Republican critics.

‘I do think it’s been easier and harsher from some on the right-wing who have gone after her because she is the first woman, the first woman of color,’ Psaki told Politico in an interview.

Psaki said that while it may never be acknowledged publicly there is ‘no question’ that the attacks on Harris are in part because she’s a first ‘many times over.’

‘It’s a lot to have on your shoulders,’ Psaki said, adding that while Harris wants to be seen as the ‘talented, experienced expert, substantive policy person, partner to the president’ that she is, instead some of the attacks are ‘beyond’ – and they’re because of her identity.