Disgraced ex-congresswoman Katie Hill’s new baby daddy denied his secret relationship with her while reporting on her throuple scandal and publicly defending her.

Former Playboy Magazine politics columnist Alex Thomas waded into the controversy, tweeting and publishing a newsletter erroneously claiming Republican groups were behind the story and vowed to ‘chase the f***ing rabbit’ because he was ‘hungry for a pulitzer’ – but failed to disclose that he had been in a romantic relationship with Hill for months.

In October 2019, DailyMail.com published a story about Hill’s three-way relationship with her young female campaign staffer and her husband, and an alleged affair with a congressional staffer that led to an ethics committee probe and Hill’s resignation.

In an interview with Vanity Fair published Tuesday, Hill, 34, revealed she is pregnant and living with Thomas, 30, in Washington DC. 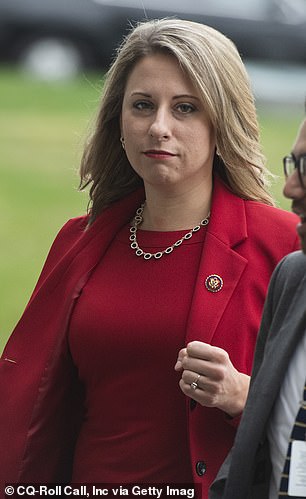 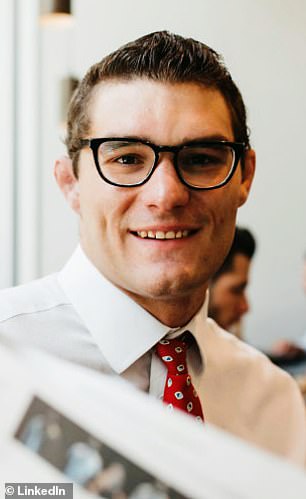 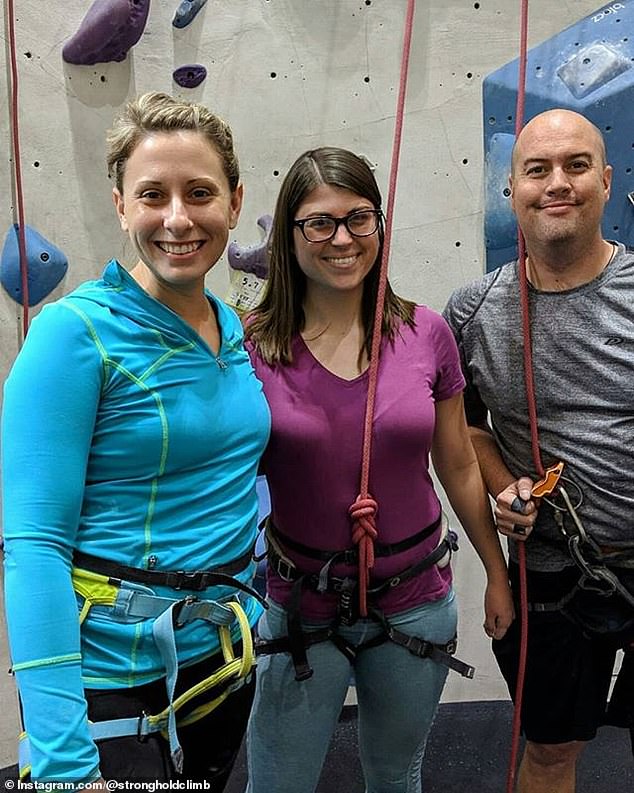 Hill, 34, was forced to resign during her first year in office after reports revealed she had been in a three-way relationship with her staffer Morgan Desjardins (center) while married to now-ex-husband Kenny Heslep (right) in 2019

The ex-politician told the magazine she met Thomas at a congressional softball game in June 2019, and previously told New York magazine they went on a beach vacation together in August that year.

After the throuple scandal broke two months later, Thomas, who was then a Playboy staffer, reported on the story and defended Hill on Twitter without disclosing his romantic relationship.

In since-deleted October 2019 tweets, Thomas reported that the National Republican Congressional Committee (NRCC) had been ‘shopping around the Katie Hill images’ before the scandal broke.

He tweeted in all-caps before publishing his story: ‘SOME NRCCxKATIE HILL S**T IS GONNA HIT THE FAN IN THE NEWSLETTER THIS WEEK, BOYS. SUBSCRIBE’.

But after the NRCC denied the claims, Thomas conceded that the organization ‘might have never had their hands on the photos.’ 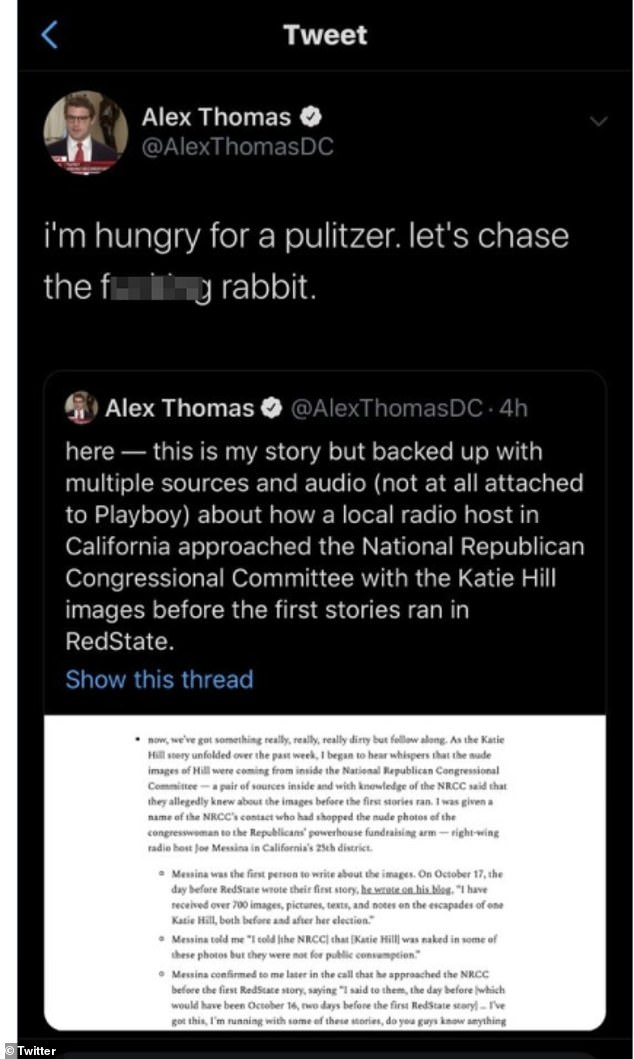 Thomas, a politics columnist for Playboy Magazine at the time, published a newsletter reporting on the scandal, but failed to disclose he was dating Hill at the time

In since-deleted October 2019 tweets, Thomas reported that the National Republican Congressional Committee (NRCC) had been ‘shopping around the Katie Hill images’ before the scandal broke 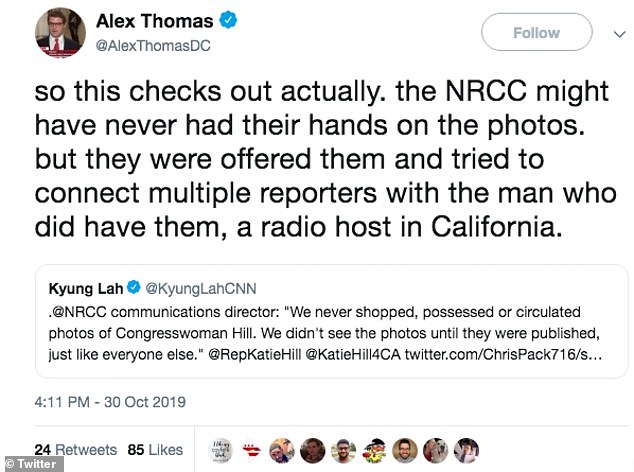 After the NRCC denied the claims, Thomas conceded that the organization ‘might have never had their hands on the photos’

The reporter ran a story on the alleged Republican links to the leaked pictures and texts involving Hill in his personal newsletter, not in Playboy Magazine, and tweeted that his reporting was ‘not at all attached to Playboy’.

When the Washington Free Beacon contacted him in March 2020 with questions about his failure to disclose his relationship with Hill, Thomas did not respond.

An NRCC spokesman told the Beacon at the time: ‘It’s baffling that someone who has sex with the subject of his glowing puff piece articles making now-retracted accusations against our organization is a credentialed member of the press.’

When Thomas and Hill were spotted together at a Manhattan book party in February 2020, he denied any romantic involvement, and reportedly ‘insisted that he and Hill are just pals and, in fact, they’d attended the bash with two other friends,’ according to a New York Post report.

But in a sympathetic interview days later, Thomas and Hill made no effort to hide their intimate relationship.

In the March 2020 New York magazine profile of Hill, Thomas claimed to have walked in on her in the bath after she ‘scraped’ her wrists with a knife while contemplating suicide on the evening of October 24, 2019. 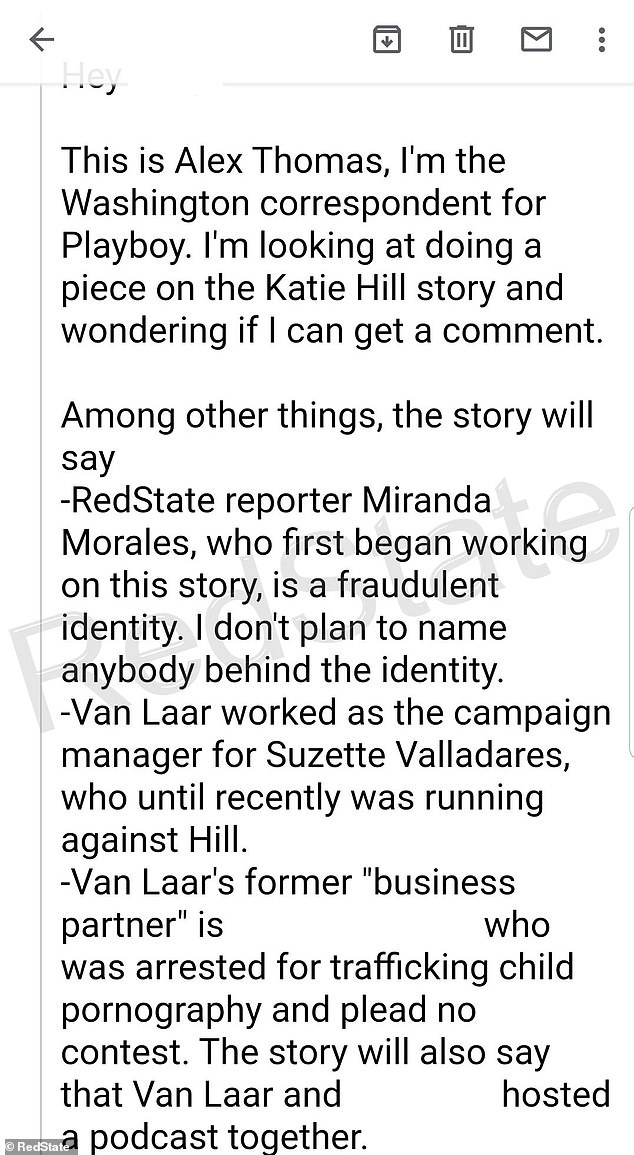 In October 2019 Thomas reportedly sent an email to Red State, the conservative news site that first published leaked photos and texts involving Hill, saying he was ‘looking at doing a piece on the Katie Hill story’ and claimed that the site was using a fake identity to write stories about his secret girlfriend

On October 27 he then reportedly sent an email to Red State, the conservative news site that first published leaked photos and texts involving Hill, saying he was ‘looking at doing a piece on the Katie Hill story’.

In the email, Thomas claimed that the site was using a fake identity to write stories about Hill, that the Red State journalist who published its Hill stories, Jennifer Van Laar, had worked as a campaign manager to Hill’s former political opponent Suzette Valladares, and that Van Laar’s former business partner was arrested for trafficking child pornography.

Van Laar, who later published Thomas’s email, says all three claims are false and that Thomas failed to declare his relationship with Hill in any communications. 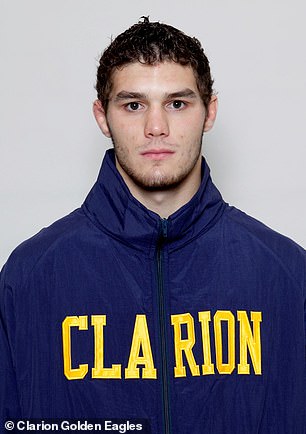 ‘It’s unethical to “look to write a piece” whose sole purpose is to discredit and smear a fellow journalist who published (true) stories that can negatively impact your partner’s career, whether or not you disclose your conflict of interest,’ Van Laar wrote in a March 2020 RedState post.

‘It’s unethical to threaten to publish untrue inflammatory information about someone’s former colleagues, friends, or family as a way to intimidate a fellow journalist.’

Thomas studied English Language and Literature/Letters at Clarion University of Pennsylvania from 2009 to 2012 where he was a varsity wrestler, then got a B.A. in English at Salisbury University, graduating in 2014.

He worked for 14 months as a staff writer at Splashpress Media the year after he graduated, then at Cox Media Group before being hired as a political columnist at Playboy in May 2018, according to his LinkedIn profile.

He quit to write a novel in March this year, but still publishes as a freelancer. 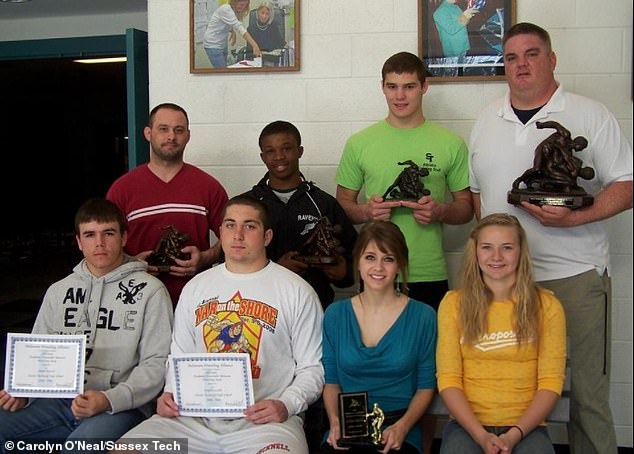 Alex Thomas, who grew up in Seaford, rural Delaware, used to be a member of Sussex Tech wrestling team. Here’s pictured in 2009, standing second from the right (green t-shirt) 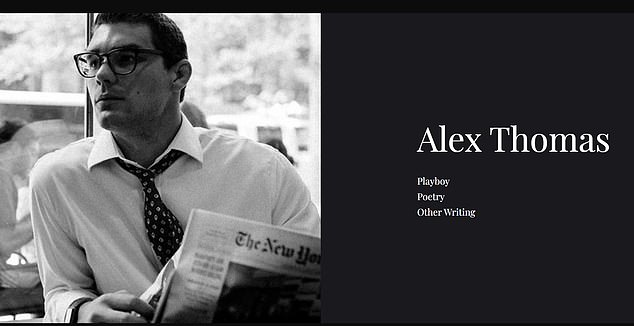 He quit to write a novel in March this year, but still publishes as a freelancer 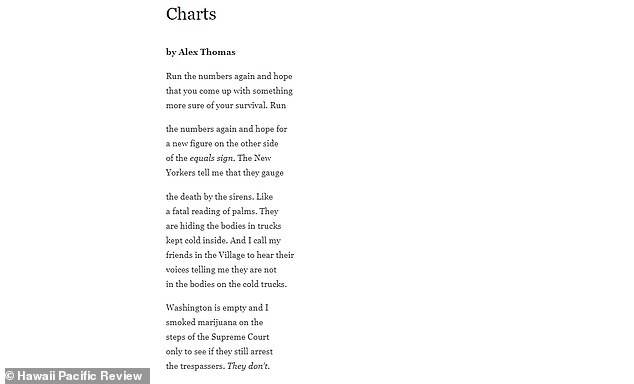 Thomas, now a published poet and writer, also wrote about lighting up a joint outside the Supreme Court during the coronavirus lockdown last year for the Hawaii Pacific Review

Thomas has been a published poet since 2015, writing in the Pine Hills Review, Broad River Review, Third Coast magazine and others.

His poetry over the past two years hinted at his changing love life, publishing a poem in the fall 2019 edition of DMQ Review about being lonely and looking for love in a city, but mentioning ‘my girlfriend’ in a 2020 poem published in the Broad River Review.

The writer appears to have a similar penchant for bending the rules as the mother of his child.

The infamous photo of Hill published by DailyMail.com in 2019 showed her holding a bong at a time before marijuana was legalized in California. 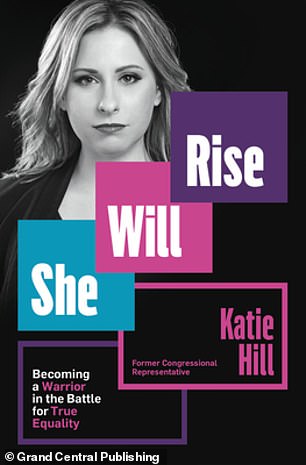 In her 2020 memoir, She Will Rise, Hill hints at her relationship with Thomas

Thomas also wrote about lighting up a joint outside the Supreme Court during the coronavirus lockdown last year.

‘Washington is empty and I / smoked marijuana on the / steps of the Supreme Court / only to see if they still arrest / the trespassers. They don’t,’ he wrote in a June 2020 poem for the Hawaii Pacific Review.

Though the drug was mostly legalized in 2014, ‘it remains a crime under D.C. law for anyone to… smoke or consume marijuana on public space (parks, streets, alleys, sidewalks) or anywhere to which the public is invited,’ according to the ACLU.

‘You still cannot have marijuana on federal land (which includes Rock Creek Park, the National Mall, and area around federal buildings).’

The 30-year-old grew up in Seaford, rural Delaware, where his parents own a house on the Nanticoke River – the apparent location of his photoshoot with Hill for their Vanity Fair profile.

Hill acknowledged Thomas in her book, She Will Rise, hinting at their relationship prior to her scandal, and how she visited his parents Michele and LJ, at the Seaford house.

‘Alex, you showed me how to laugh again, how to be happy. And then when it all came crashing down, you were the shoulder I could cry on, the one who could make me feel safe, every single time. Michele and LJ, thank you for letting me into your home and your hearts when I needed it most,’ Hill wrote.

The glowing Vanity Fair profile glossed over her scandal in one sentence, did not mention her boyfriend’s seeming conflict of interest of previously reporting on Hill while dating her, or allegations from another of her ex-employees and throuple lovers who accused Hill of ’emotional abuse’. 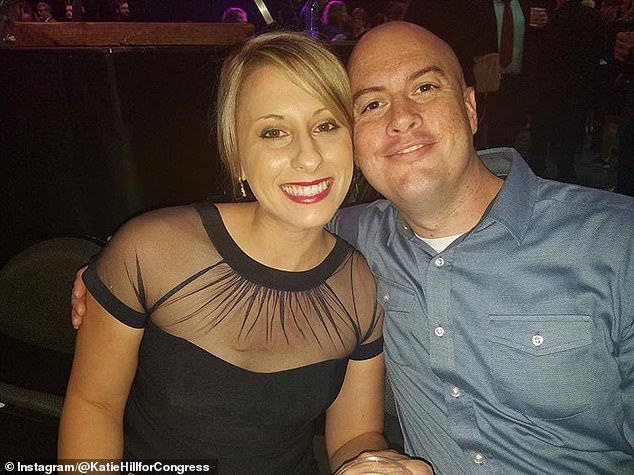 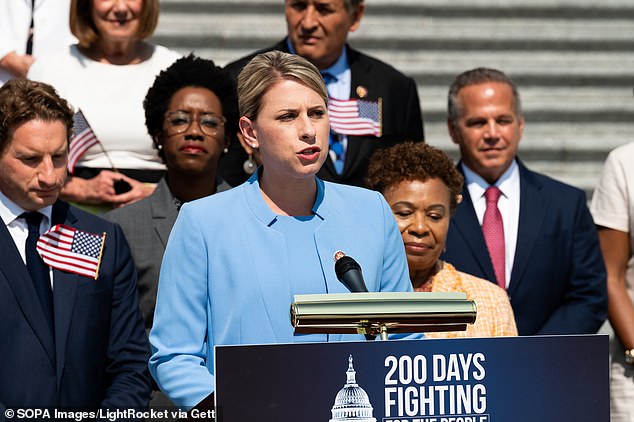 Hill (pictured in July 2019) told Vanity Fair that she is considering filing for bankruptcy as she faces $400,000 in legal fees from her courtroom defeats over reports of the scandal

In an interview with DailyMail.com last year, the woman said she met Hill and her husband Kenny Heslep on dating site OkCupid in 2010 – years before Hill’s infamous throuple with her campaign staffer – and joined them in a polyamorous relationship age 21.

As well as her throuple girlfriend, Hill became her boss when she got the girl an internship at Los Angeles charity People Assisting The Homeless (PATH) where Hill was deputy CEO.

The woman, who asked to remain anonymous, claimed Hill was financially controlling and would fly into rages at her, leaving her wondering if her job would be in jeopardy if she failed to complete chores at home.

The woman said her 15-month experience with Hill left her scarred even after 10 years of therapy.

Hill, who was showing a baby bump in her Vanity Fair photoshoot, appears to have set up a baby registry for gifts with a due date of February 24, 2022.

She told the magazine she is considering filing for bankruptcy, and faces $400,000 in legal fees from her courtroom defeats.

Van Laar was one of those sued by Hill and won, and is currently attempting to recover more than $100,000 in legal fees from the former congresswoman.

Hill’s lawyers are currently refusing to accept service of debt papers according to Van Laar’s attorney.