The driver shortage can’t be that bad! Keir Starmer is told he’s failed his test after he crashes lorry at HGV school

Labour leader Sir Keir Starmer was told ‘you’d have failed your test’ after he was given a crash course in HGV driving today.

Sir Keir had been visiting a HGV driver training centre in Greengate, Middleton, Greater Manchester, amid his party’s repeated calls for the Government to act on haulage driver shortages, when he was offered the chance to get behind the wheel.

However just moments later comical footage showed Sir Keir strike a bollard behind him as his instructor confirmed: ‘You’d have failed your test.’

The visit to the HGV training provider comes after Sir Keir urged the Government to tackle haulage driver shortages ‘before yet another Christmas is ruined by Tory failure’. 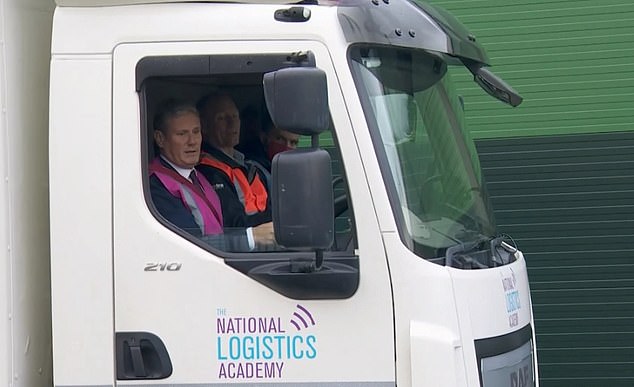 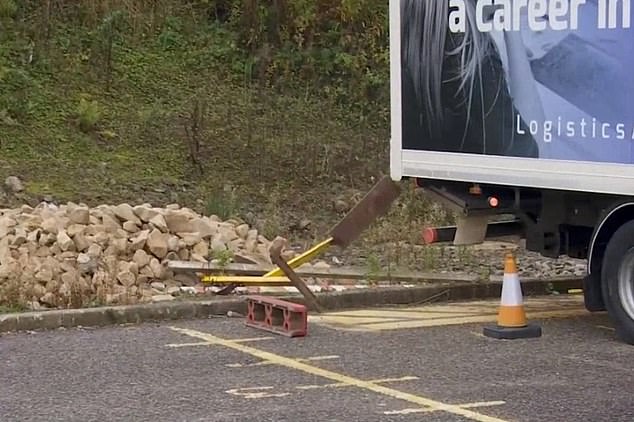 During the clip, the Labour leader is seen carefully reversing the HGV lorry as his instructor sat beside him gives him instructions.

However just seconds later a crash is heard in the background as the lorry collides into a bollard on the course and Sir Keir’s instructor says: ‘Put it in neutral, handbrake on. Turn your ignition off.

‘You’d have failed your test.’

Speaking ahead of his visit today Sir Keir said: ‘The haulage sector is trying to save Christmas, get medical supplies to where they’re needed and keep our forecourts open, whilst the Government is missing in action with their out of office on.

‘This is a crisis made in Downing Street but so far being mopped up by businesses and workers.

‘This Government must break the habit of their decade in power by acting with the urgency required before yet another Christmas is ruined by Tory failure. 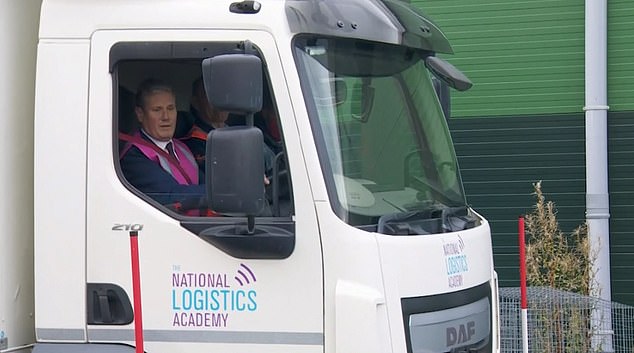 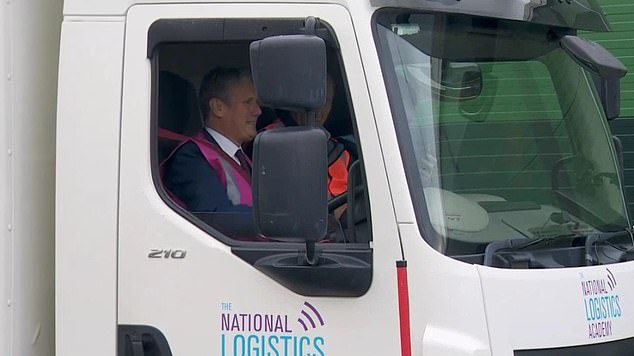 Seconds after the crash the Sir Keir instructor says: ‘Put it in neutral, handbrake on. Turn your ignition off. You’d have failed your test’

‘Ministers need to listen to industry to build a secure HGV workforce, they must set out how exactly they are going to attract people to training, including by listening to Labour’s plan to create more apprenticeships, and ultimately address how they are going to improve pay and conditions for this vital sector.’

The latest scenes come just days after Sir Keir Starmer revealed his nickname of ‘Special K’ as he paid a visit to a Kellogg’s factory in Trafford Park, Greater Manchester.

The Labour leader, who met business leaders, apprentices and trade union representatives to discuss problems with distribution and shortages, told reporters he shared a name with one of the manufacturer’s well-known brands.

He said: ‘I’ve been dubbed Special K since I was born, K for Keir.’

Prior to his visit, Sir Keir criticised the Prime Minister for ‘refusing to take responsibility’ for shortages and ‘offering only jokes and slogans’.

He said: ‘Boris Johnson failed to act when industry warned him of driver shortages months ago, allowing this chaos to develop.

‘Without an adequate plan to recruit and train more drivers now, the chaos will continue as demand rises in the run-up to Christmas.

‘Britain needs a high-wage high-productivity economy, but this Government has no plan to get there.

‘Instead, wages are stagnant, bills are rising, and the Conservatives are raising taxes on working families and small businesses.’