Cat burglar! Harpo the klepto-kitty ‘steals’ toys and fridge magnets after his owner trains him to fetch items she chooses

By Jonathan Rose For Mailonline

A kleptomaniac cat has been trained to only ‘steal’ items his owner chooses.

Rain said she decided to tackle Harpo’s thievery by turning it into a structured daily game. 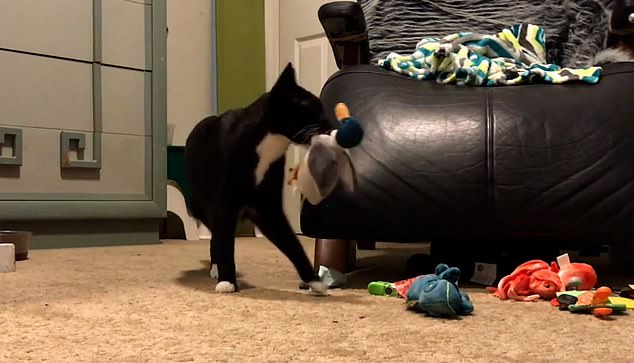 Video shows a klepto-kitty ‘stealing’ toys and fridge magnets after his owner in Portland, Oregon, trained him to fetch items she chose

Clips show Harpo taking fridge magnets with pieces of paper and cards attached off a metal lamp, and carrying a killer whale toy almost as big as him around the house.

Another video of the cat’s ‘daily heists’ sees Harpo bring a series of magnets and toys to owner Rain while meowing proudly.

Rain has been sharing the videos of her ‘glorious goofball’ on social media, with Harpo’s ‘daily heist’ thread attracting thousands of views on Twitter alone.

Harpo was adopted from the Oregon Humane Society as a Christmas present in 2008, alongside his brother Groucho.

Rain said they were named after the Marx Brothers due to their differing personalities.

Harpo was completely silent for the first year, whereas Groucho was smart, loud and extroverted.

Harpo started stealing fridge magnets and stray papers on a semi-regular basis when he was about two, which is also when he first started vocalizing regularly. 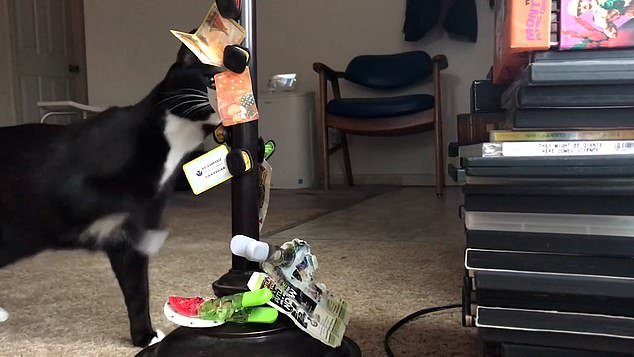 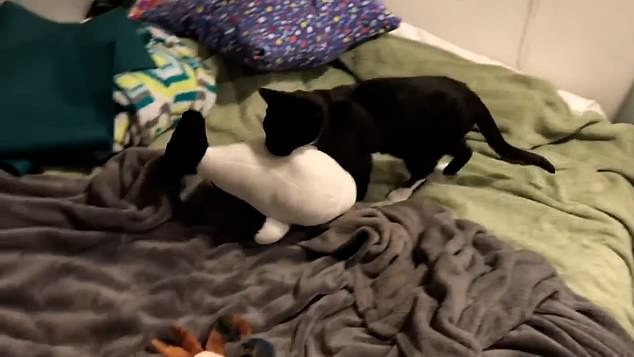 But even though he brought all his prizes straight to Rain while meowing proudly, he didn’t like to be caught in the act, so she never actually saw him stealing until he was about eight years old.

When Harpo turned eleven, Rain started to train him so he wouldn’t steal things she didn’t want him to.

Rain, who is originally from Washington DC, said: ‘A good example from Harpo’s training would be how I got him to stop putting teeth marks in my comics by putting a sheet of paper into each magazine holder, rewarding him for bringing those, and telling him no and ignoring him when he brought the comics.’ 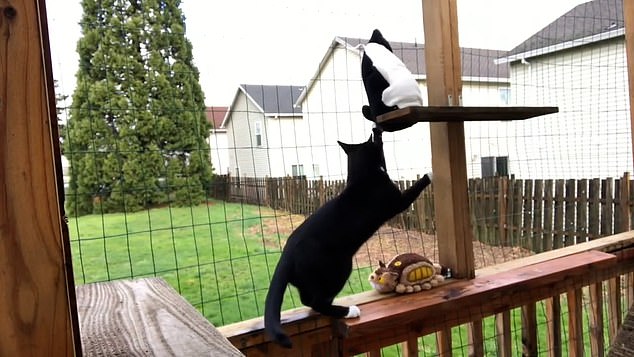 Harpo was adopted from the Oregon Humane Society as a Christmas present in 2008, alongside his brother Groucho

Unfortunately, Harpo was diagnosed with cancer, but he was stealing again before he’d even gotten his stitches out.

Rain said: ‘Once he got better, I started putting his fridge magnets on any surface they would stick to and putting plush animals all over the place.

‘The playing cards in the magnetic clips are jokers, knaves, and aces of hearts, because he is all of those things.

‘Before long, he would steal almost anything I offered him and has long since gotten over his shyness about being caught in the act.

‘So I started having him bring me vaccine flyers and masks to make public service announcements.

‘My intention was just to make people laugh and raise awareness of the need to have a plan for their pets if they got sick.’