A Labour MP accused of conning a local council out of £64,000 in housing benefits ‘acted dishonestly’ to make personal gain and ‘jump the queue’ on the social housing register, a court heard today.

Apsana Begum, 31, the MP for Poplar and Limehouse in east London, claimed she was living in ‘overcrowded conditions’ with her family when she was in a four-bedroomed house with three other people, jurors were told.

She successfully gained a social housing tenancy in under four months, rather than the average three-year wait, due to her claims, a court heard.

Begum, who is on trial at Snaresbrook Crown Court, later blamed her partner, local councillor Ehtashamul Haque, for making an application to Tower Hamlets Council in her name, it is claimed.

The MP, who won the east London seat of Poplar and Limehouse with a 28,904 majority in the general election in December 2019,  denies three counts of fraud. 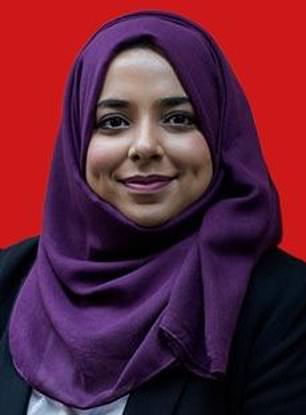 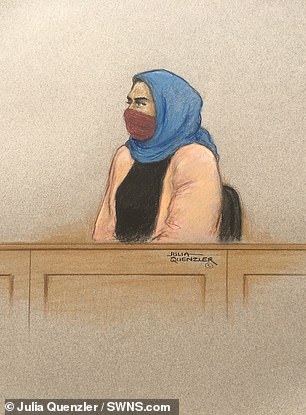 Apsana Begum (left and right in court), 31, the MP for Poplar and Limehouse in east London, claimed she was living in ‘overcrowded conditions’ with her family when she was in a four-bedroomed house, jurors heard

The alleged incidents relate to periods between January 2013 and March 2016, in which the London Borough of Tower Hamlets alleges housing Begum cost £63,928 in rent.

Begum said she ‘vigorously contests these malicious and false allegations’ that she failed to tell the council that she was no longer living in overcrowded conditions when she made her claims.

Today, prosecutor James Marsland told jurors they must consider whether Begum’s case comprises of her ‘misfortune for things occurring’ or ‘significant facts which count against her.’

He said: ‘Now you know that Ms Begum says that this property at Woodstock Terrace, Poplar, was always a three-bedroom house. There’s no real room for mistake there.

‘If you walked into the living room and noticed a bed in there, you’d back yourself.

‘Ms Begum’s aunt has said in August 2009 that the property is four beds and has gone on to set out the various people living in those bedrooms. It’s not a slip of the pen is it?

‘This is part of the application by Ms Begum’s mother for council tax benefit. She says the property at this point was used as four bedrooms.

‘Is it just misfortune that Ms Begum’s mother and Ms Begum’s aunt made the same inexplicable mistake, or is it again a significant fact that counts against Ms Begum?

‘There would be no reason to exaggerate the number of rooms.

‘On 21 May 2013, we know that Ms Begum is taken or escorted from Woodstock Terrace, Poplar to St Bernard Terrace, Whitechapel.

‘On 14 June 2013, we know that that’s the date given by Ms Begum that she told council tax customer services about the change of address. She tried to ride two horses on this.

‘In any event, she knew she needed to tell Tower Hamlets Housing Options. It only takes a moment to think about it. 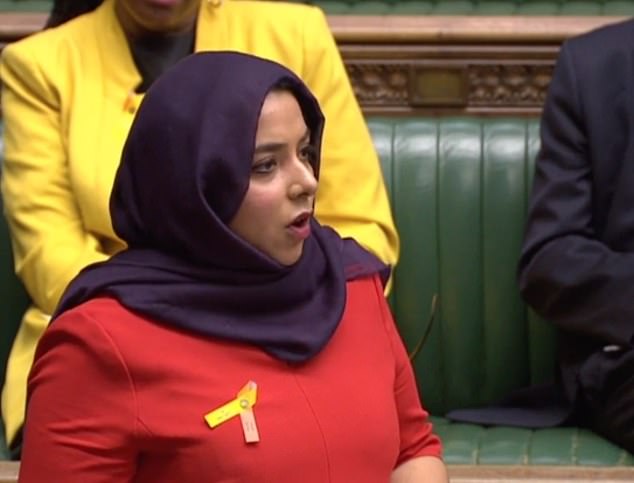 The MP, who won the east London seat of Poplar and Limehouse with a 28,904 majority in the general election in December 2019, denies three counts of fraud

‘The prosecution would say that she is specifically avoiding telling housing options. Then we reach another fork in the road.

‘Ms Begum says around this time, she did tell Housing Options. Is it her misfortune that nobody logged it and nobody actioned it?

‘Or is that a significant fact that she didn’t do it? That’s why it’s not logged or actioned.’

Mr Marsland then highlighted the bids made on Begum’s account just before and during her time living with her husband at St Bernard Terrace.

He continued: ‘Is it Ms Begum’s misfortune that Mr Haque chooses this very time, right at the start, before she’s even moved in, to look through her notebook, to find her customer reference number and to then begin making bids?

‘Mr Haque could make no gain from making these social housing bids, without Ms Begum being involved.

‘He couldn’t make a gain without her being involved. She’d have been contacted.

‘She’d have been asked to go for a viewing. He couldn’t achieve anything, it was pointless.’

Mr Marsland also asked the jury to consider how it could happen on two occasions that calls made by Begum were not logged or actioned by staff at Housing Options.

He added: ‘Is it a misfortune that this has happened twice. The two times she calls up, years apart, the same thing happens.

‘Don’t you need to suspend belief a bit here and there, if Ms Begum is right?

‘But then, members of the jury, if you actually just put in the one fact that is forbidden to Ms Begum, that she is guilty

‘If you put in the one fact that she was dishonestly withholding information on several occasions that would affect her application.

‘It’s just a series of connected significant facts that count against her.

‘In this period of time, to put it plainly, Ms Begum prioritised her own needs over those of others on the housing register.

‘She wanted to retain, falsely, her higher priority, so that she could get a social housing tenancy. Try explaining that to the other people on that list.’

Last week Mr Marsland told the court that before she was a sitting MP Begum had worked at social housing group Tower Hamlets Homes from 2013 and 2016, including as a housing advisor. 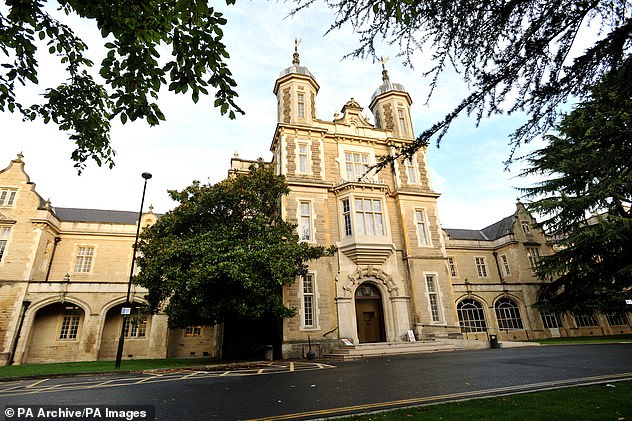 The Labour MP, who is on trial at Snaresbrook Crown Court (pictured), said she ‘vigorously contests these malicious and false allegations’

He told jurors that, because of her position, she aware of the banding system and how she was able to manipulate it to ‘jump the queue.’

The prosecutor added: ‘In July 2011, Ms Begum applied to join the social housing register for London Borough of Tower Hamlets.

‘She remained on the register until March 7, 2016 when she was awarded the tenancy of a studio flat.

‘The basis of her application was that she was living in overcrowded conditions in her family home.

‘In making the application, Ms Begum was under an ongoing duty to inform the relevant department of London Borough of Tower Hamlets of any changes in her circumstances.

‘The Prosecution case is that over three distinct periods of time, Ms Begum deliberately and dishonestly did not inform London Borough Tower Hamlets Housing Options of significant changes in her circumstances.

‘The Prosecution say the reason she didn’t tell London Borough of Tower Hamlets Housing Options was that she knew that, if she did, it would negatively affect her application.

‘She withheld the information in order to gain a social housing tenancy. The defence response, in a sentence, is that at no point was she acting dishonestly.

‘She said she kept London Borough of Tower Hamlets informed as best she could, including whilst going through some difficult moments in her life, including in relation to her family and partner.’

A supporter of former Labour leader Jeremy Corbyn and Momentum, she has spoken in Parliament about the impact of coronavirus on ethnic minorities and sits on the Commons education committee.

She is also notable for being the chair of an all-party committee on domestic abuse and violence and has spoken in the House of Commons about being a survivor.