Vice President Kamala Harris continued the administration’s push to try to soothe relations with France after the clash over a US submarine deal on her diplomatic visit Wednesday – and by all outward signs was enjoying the task.

‘I’m very happy to be in Paris,’ she exclaimed when a reporter shouted a question about whether she had to make ‘amends.’

Macron walked down the steps to greet her as her motorcade arrived. The two shook hands and smiled, with Harris grinning as they first clasped.

Macron did not offer a double-cheek greeting that is common in France to the first female U.S. vice president – although he has been photographed  giving ‘La Bise’ to former President Donald Trump and former first lady Melania Trump. 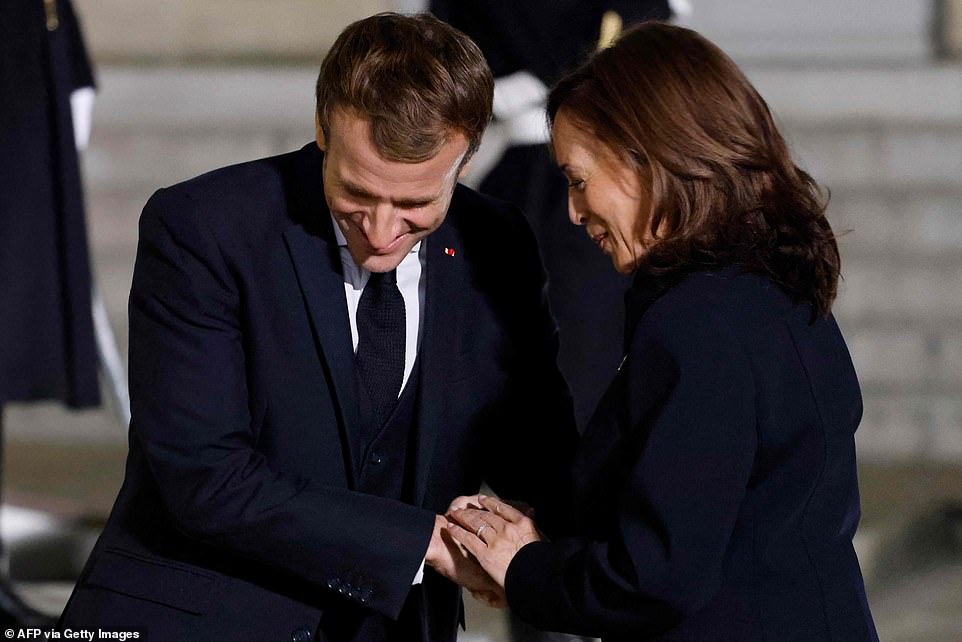 France’s President Emmanuel Macron (L) welcomes Vice President Kamala Harris prior to a meeting at the Elysee Palace in Paris on November 10, 2021. Harris is on a charm offensive to try to reset relations between the U.S. and Paris after tensions flared over a new U.S. security arrangement with Britain and Australia

Both leaders waved at a group of press lined up to record the event.

The two also posed for the cameras before a bilateral meeting.

Macron told Harris in English: ‘You’re more than welcome not just in this palace …’ and added: ‘I can tell you that the French people are extremely proud to have you here.’

He didn’t respond directly to a reporter’s question about whether the U.S.-France relationship had been repaired, but he said his meeting with President Joe Biden in Rome had been ‘very fruitful’ and had paved the way for cooperation in ‘the coming weeks, months and, I have to say, years.’

He also didn’t respond when asked if he had ‘forgiven America’ – following a spat where Paris briefly recalled its ambassador to Washington amid the fury.

Harris also referenced that prior meeting.

She gushed: ‘I do believe and I think we share this belief that we are at the beginning of a new era, which presents us with many challenges, but also many opportunities. And when the United States and France have worked together on challenges and opportunities, we have always found great success because of shared values and shared priorities.’ 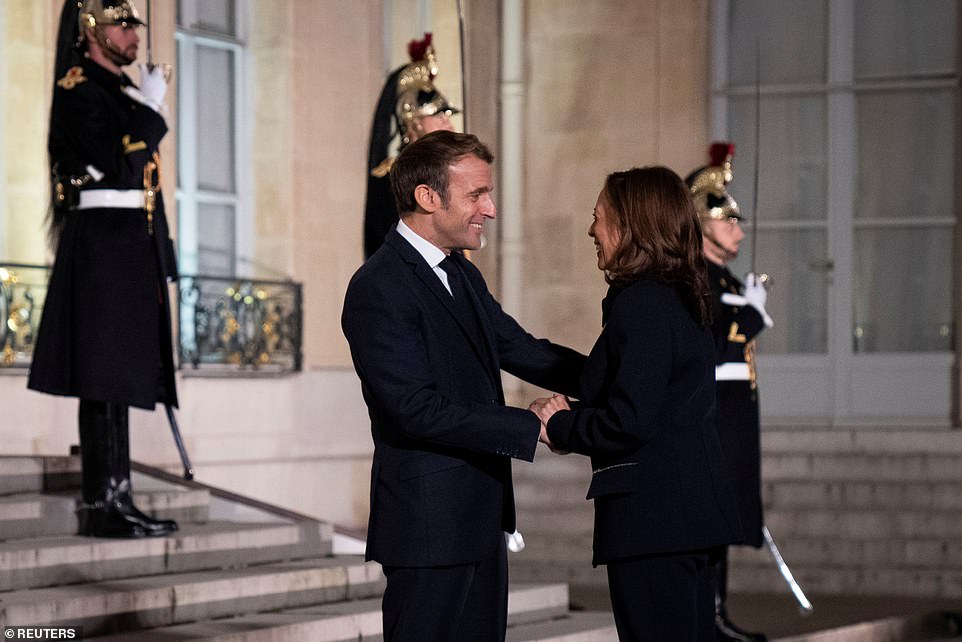 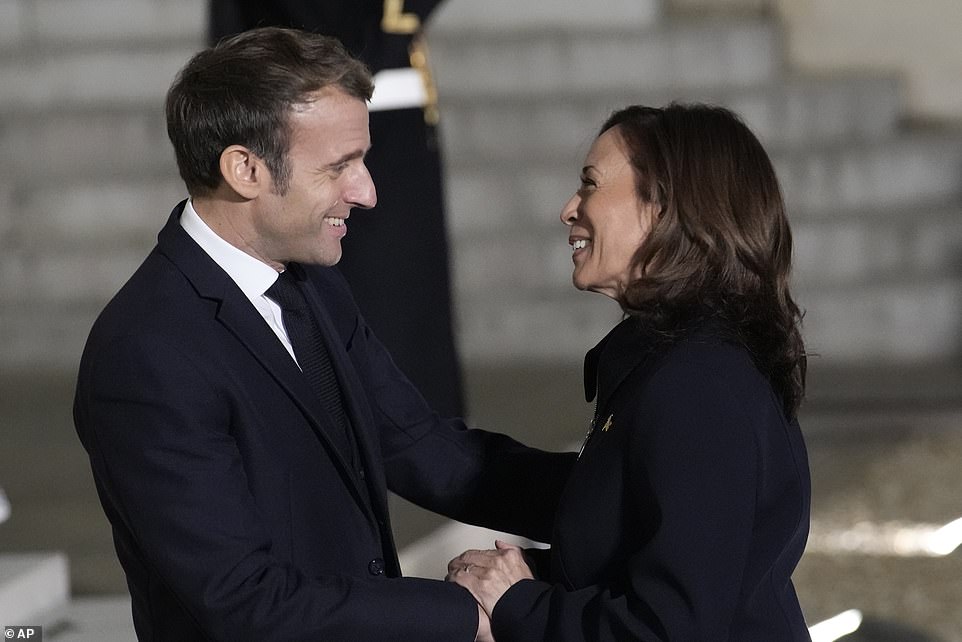 Harris is focusing on vaccines and supply chain issues, as well as mending relations with the French government 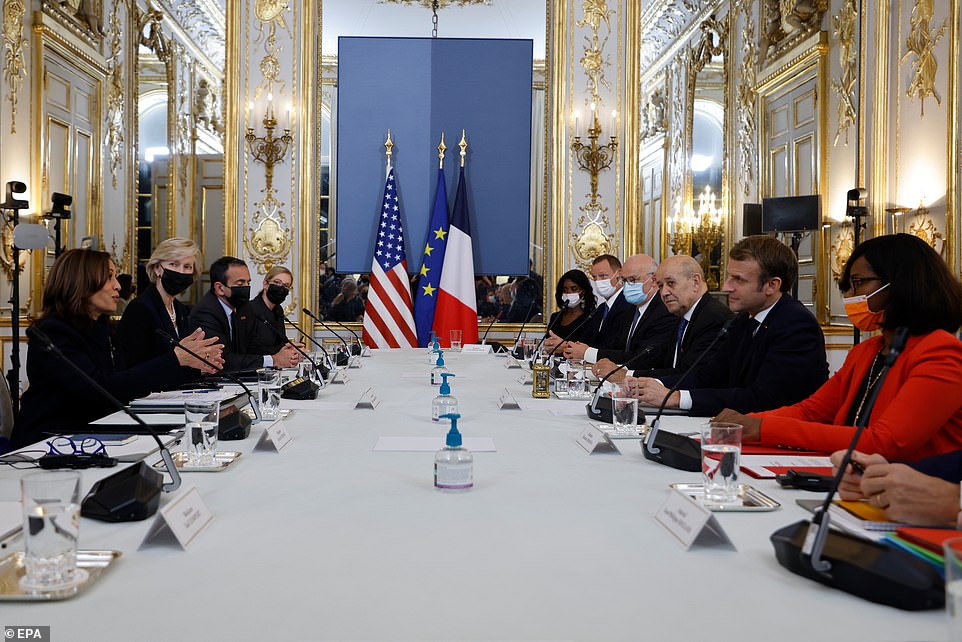 ‘I do believe and I think we share this belief that we are at the beginning of a new era,’ said Harris 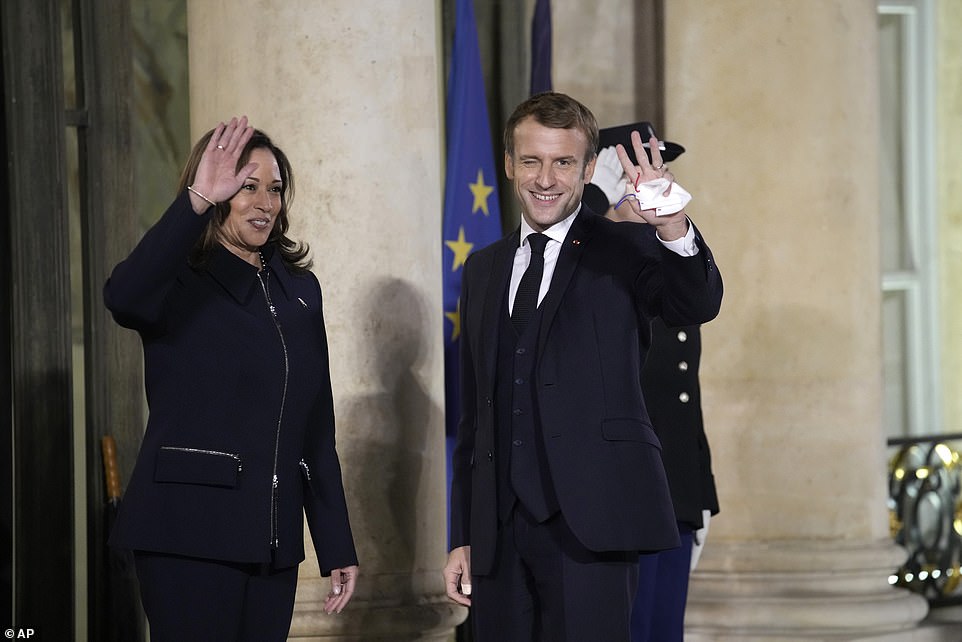 ‘I can tell you that the French people are extremely proud to have you here,’ Macron told Harris 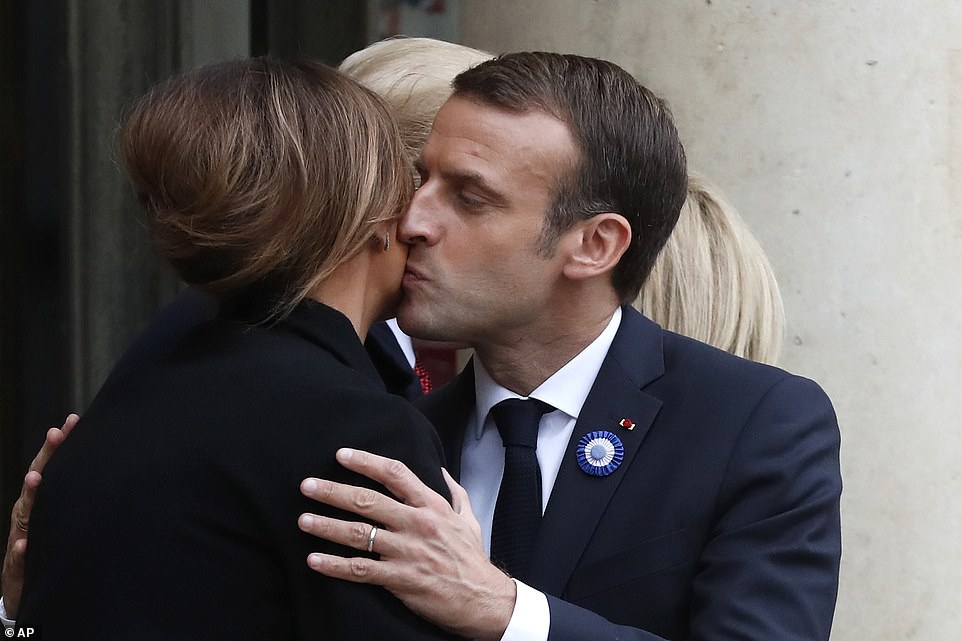 French President Emmanuel Macron kisses U.S first lady Melania Trump at the Elysee Palace in Paris, Saturday, Nov.10, 2018. Trump is joining other world leaders at centennial commemorations in Paris this weekend to mark the end of World War I 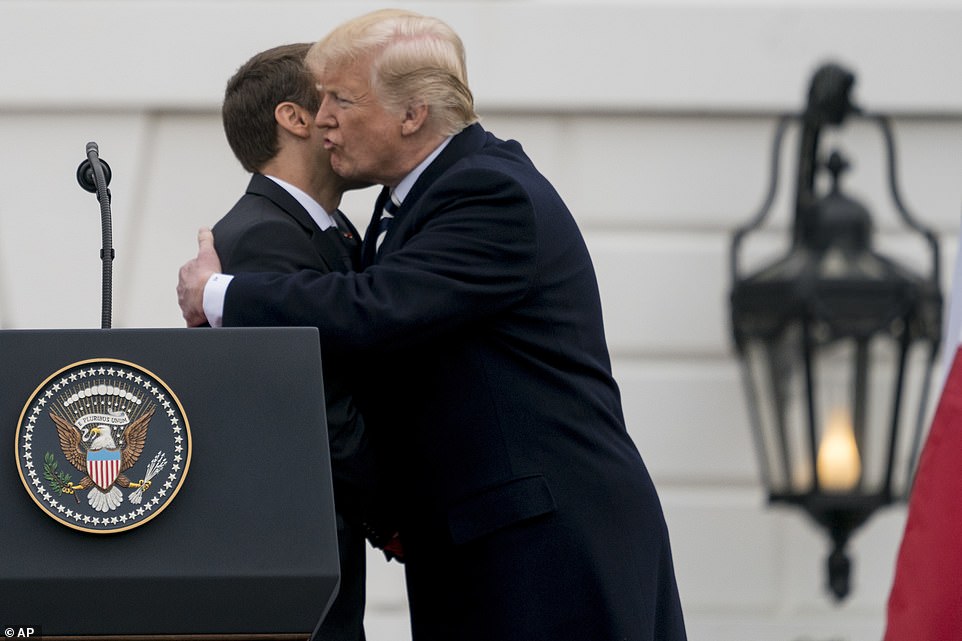 President Donald Trump and French President Emmanuel Macron kiss during a State Arrival Ceremony on the South Lawn of the White House in Washington, Tuesday, April 24, 2018

The meeting came after President Joe Biden and Macron met in Rome as part of another effort to restore relations, after the U.S., Britain, and Australia secretly negotiated a security agreement that involved Australia bailing out of a $60 billion submarine deal for French diesel-electric subs and agreeing to purchase U.S. nuclear submarine technology.

Biden admitted at their meeting that what the U.S. did ‘was clumsy’ and ‘was not done with a lot of grace.’ He and Macron exchanged pats on the back, and Biden reached over to touch Macron’s hand during their meeting before the cameras.

For Harris, there is more on the table than U.S.-French relations on a trip where she also visited the Institut Pasteur and will address meetings on Libya. Her own approval rating was down at 28 per cent in a new USA Today / Suffolk University poll – 10 points below Biden’s 38 per cent rating.

Earlier, Harris participated on Wednesday in a wreath-laying ceremony at the Suresnes American Cemetery and Memorial in the wealthy Paris suburb of Hauts-de-Seine. 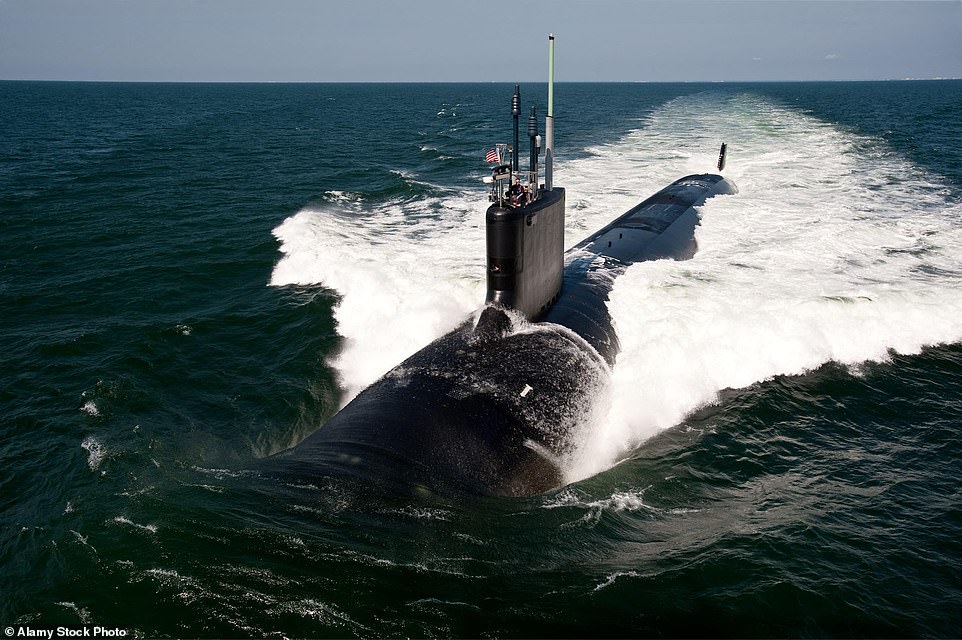 The U.S. Navy Virginia-class attack submarine USS California underway during sea trials June 30, 2011 in the Atlantic Ocean. Australia has agreed to purchase unclear-powered subs as part of the AUKUS agreement

Harris attended the memorial event with her husband, second gentleman Doug Emhoff during a four-day charm offensive trip to France.

Buried at the cemetery in France are 1,541 American troops who were killed in World War I and 24 unknown dead of World War II.

The ceremony comes the day before Veteran’s Day in the U.S. and Armistice Day, when World War I officially ended as Allied powers signed a ceasefire with Germany in Compiégne, France on November 11, 1918.

Countries that observe Armistice Day include, but are not limited to, Belgium, France, the United Kingdom, Germany, Canada, Australia, New Zealand, Serbia, Romania and Bulgaria. 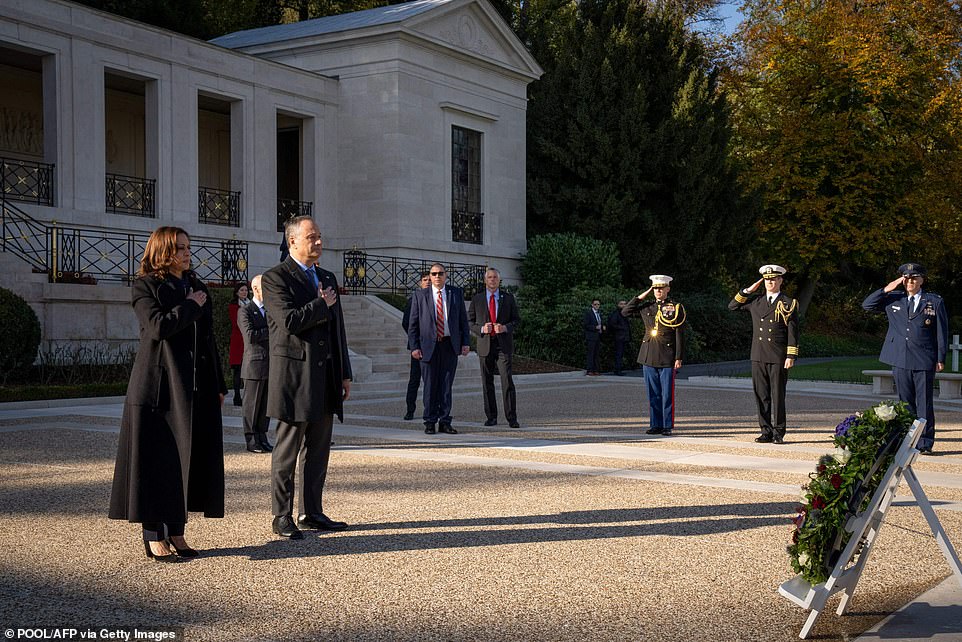 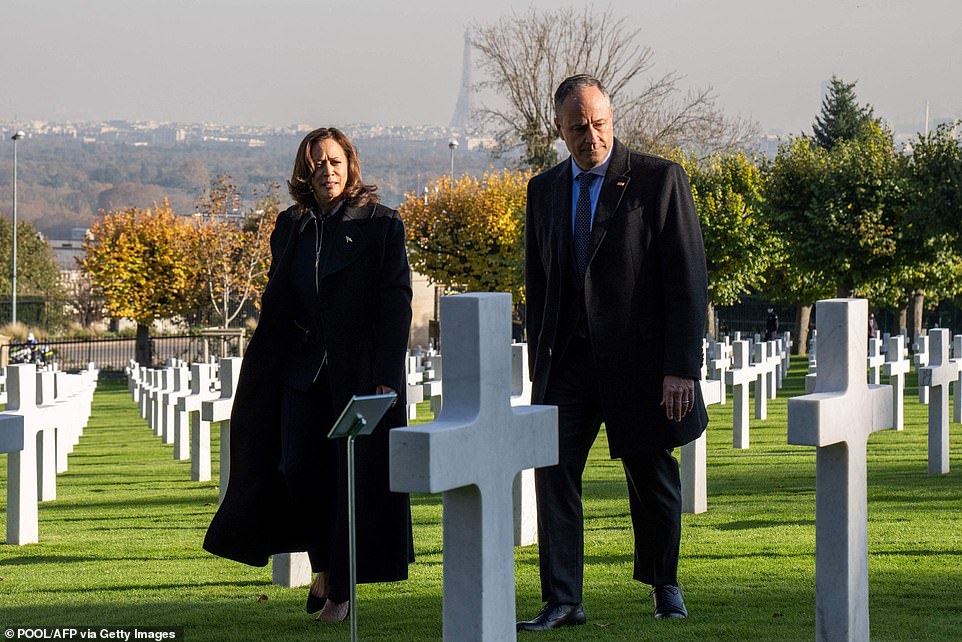 Buried at the cemetery in the suburbs of Paris are 1,541 American troops killed in World War I and 24 unknown dead of World War II 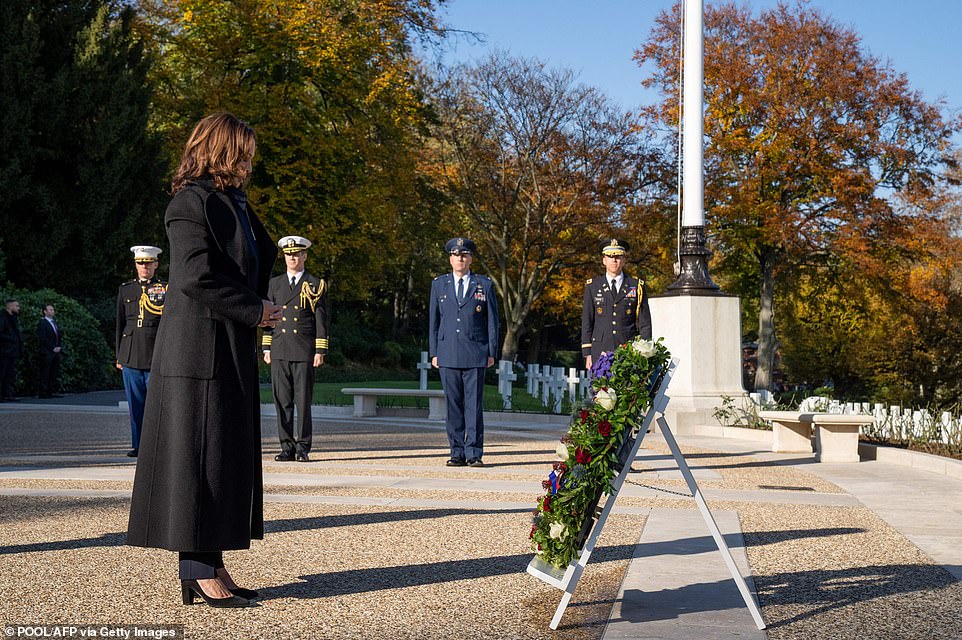 Harris stands in front of a wreath at the Suresnes American Cemetery on Wednesday to honor U.S. troops who fell in World

Later on Wednesday afternoon, Harris will hold a bilateral meeting with French President Emmanuel Macron amid rising tensions over the U.S. submarine pact with Australia and Britain dubbed AUKUS.

French Foreign Minister Jean-Yves Le Drain called the security pact in the Indo-Pacific a ‘stab in the back’ and Macron, despite France being an ally of all three countries, recalled his ambassadors from the U.S. and Australia.

The trip comes after then-President Donald Trump snubbed a 2018 commemoration for U.S. soldiers and marines killed during World War I at the Aisne-Marne American Cemetery in Belleau, France.

The president and then-first lady Melania were scheduled to pay tribute at the cemetery 50 miles east of Paris, but the White House said it was canceled due to weather preventing his helicopter from traveling to the site. 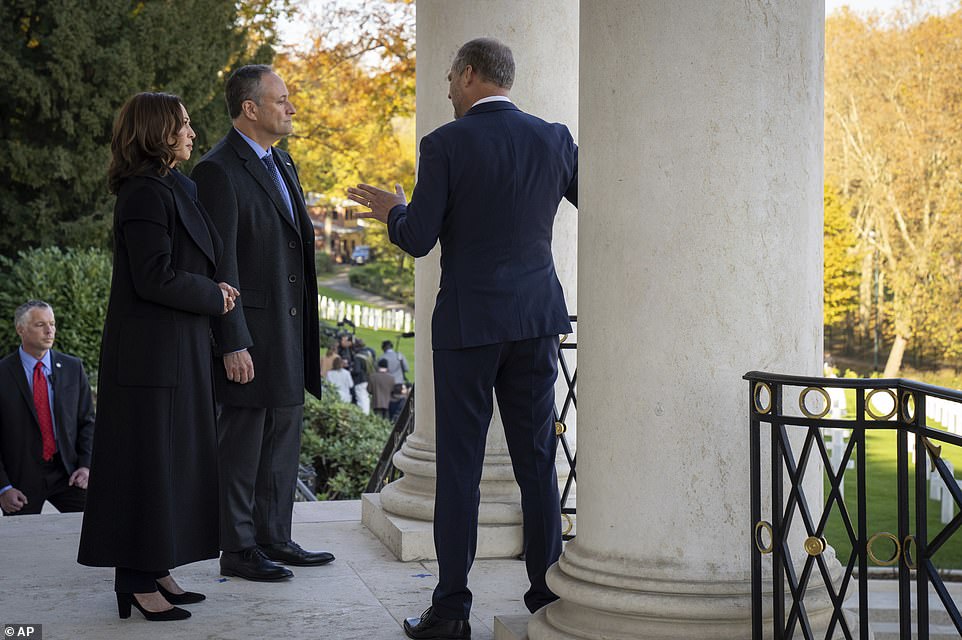 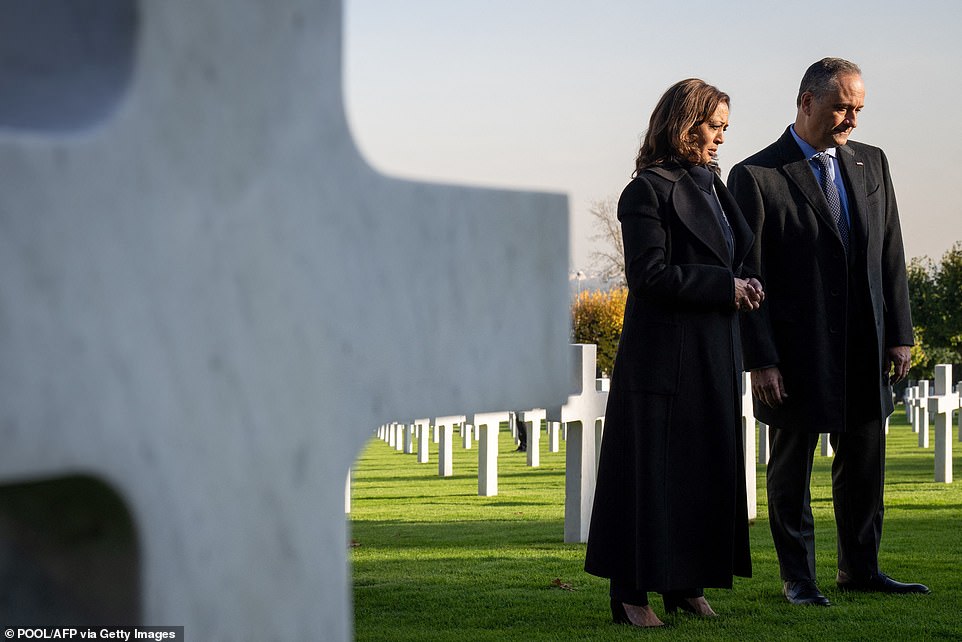 The vice president is in Paris on a charm offensive to mend relations after the AUKUS submarine deal was struck with the u.s., Britain and Australia 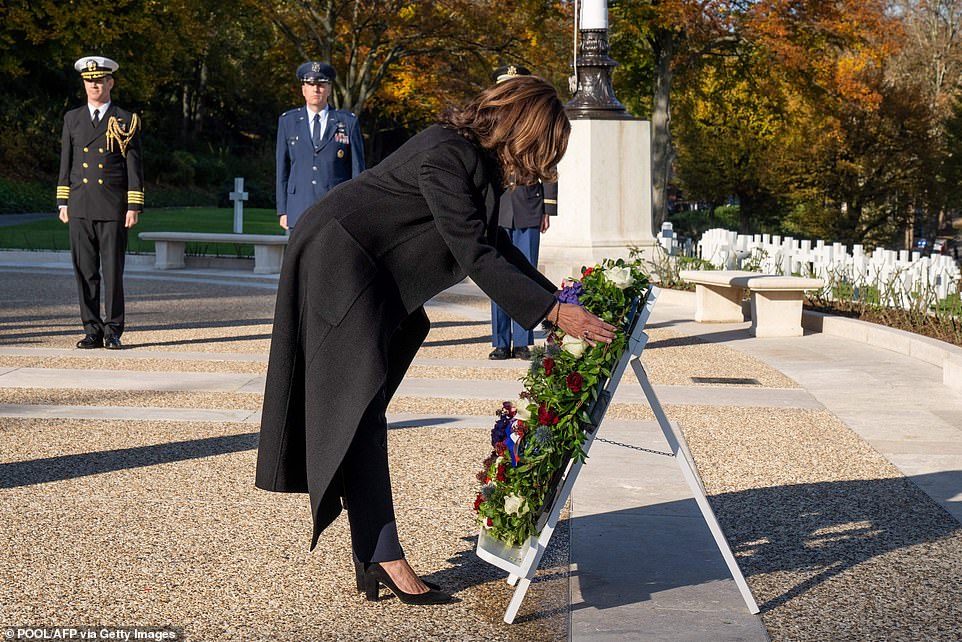 Harris takes part in laying a wreath Wednesday at the Suresnes American Cemetery in the eve of Veterans Day in the U.S. and WWI Armistice Day in France 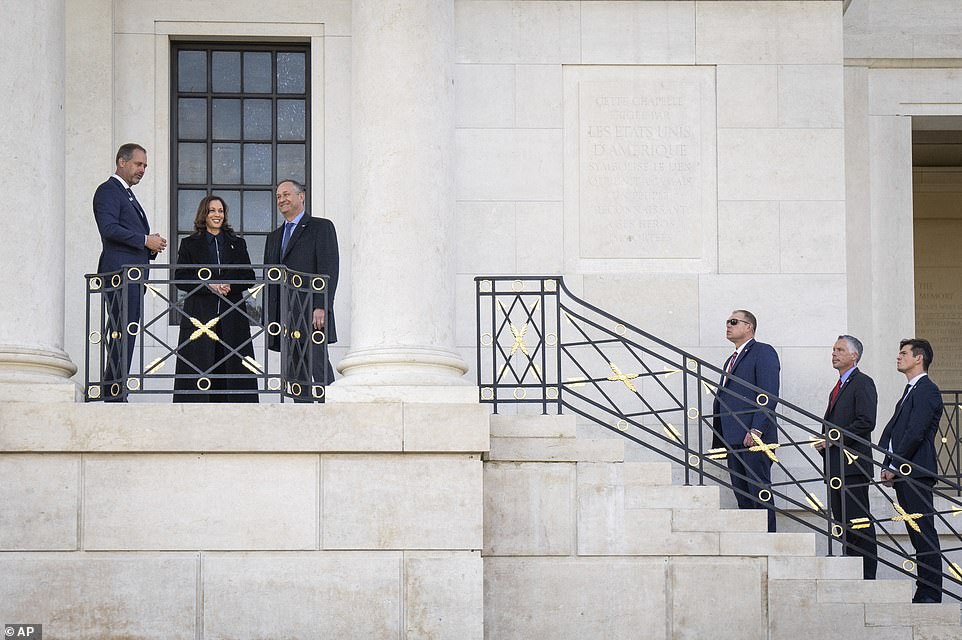 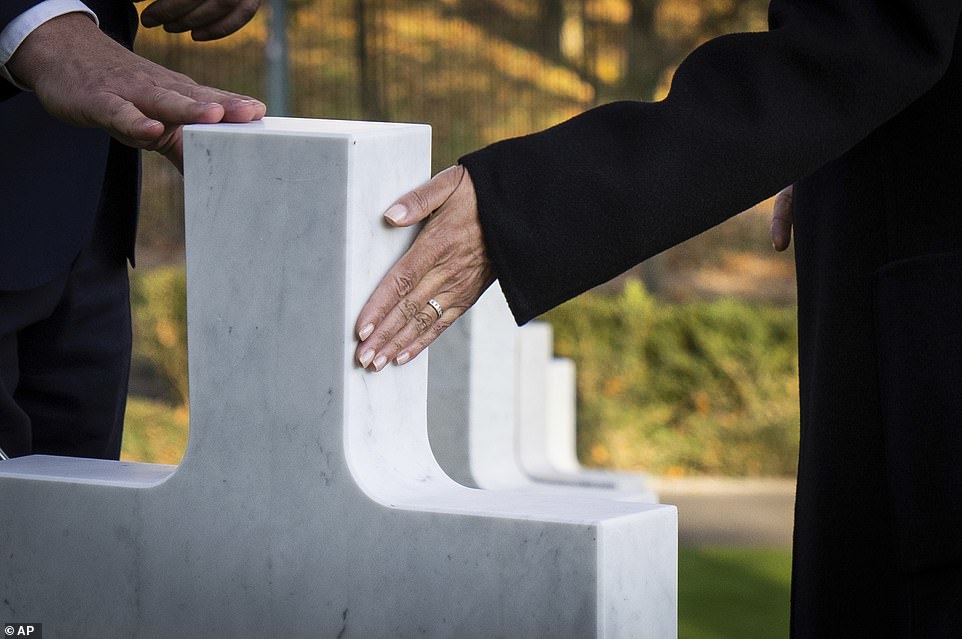 Harris and Superintendent Stradler touch the headstone for Inez Crittenden who was a leader of the “Hello Girls”, the U. S. Telephone Corps in France during World War I

Now Harris is in Paris to mend another fence related to striking a deal with Australia behind Macron’s back.

Harris and Macron are expected to discuss at their Wednesday meeting U.S. support for France’s military mission against jihadists in the African region of Sahel, as well as French-backed plans to beef up European defense capabilities.

After the wreath-laying ceremony, Emhoff will break off from his wife and meet with U.S. Embassy staff and their families in Paris as Harris prepares for her meeting with Macron.

The vice president began her multi-day trip to France by meeting with American and French scientists working on COVID-19 global preparedness at the Pasteur Institute in Paris on Tuesday.

On Thursday, Harris is slated to deliver a speech at the annual Paris Peace Forum and on Friday will participate in the Paris Conference on Libya.

While at the institute in Paris on Tuesday afternoon, Harris and Emhoff met with a French virologist and immunologist James Philip Di Santo and an American researcher.

Di Santo said they were working on understanding why people have differing symptoms and outcomes from the coronavirus and were relying heavily on nasal swabs in their research.

Harris joked she is ‘intimately familiar’ with nasal swabs – the easiest and most common way to test for a positive COVID-19 case.

Upon landing in Paris on Tuesday morning, Harris was asked by a reporter: ‘What’s your message for President Macron?’

‘It is good to be in France and I am looking forward to many many days of productive discussions reinforcing the strength of our relationship,’ she dodged, remaining unresponsive with a question on how she will ‘ease tensions’ with the French president. 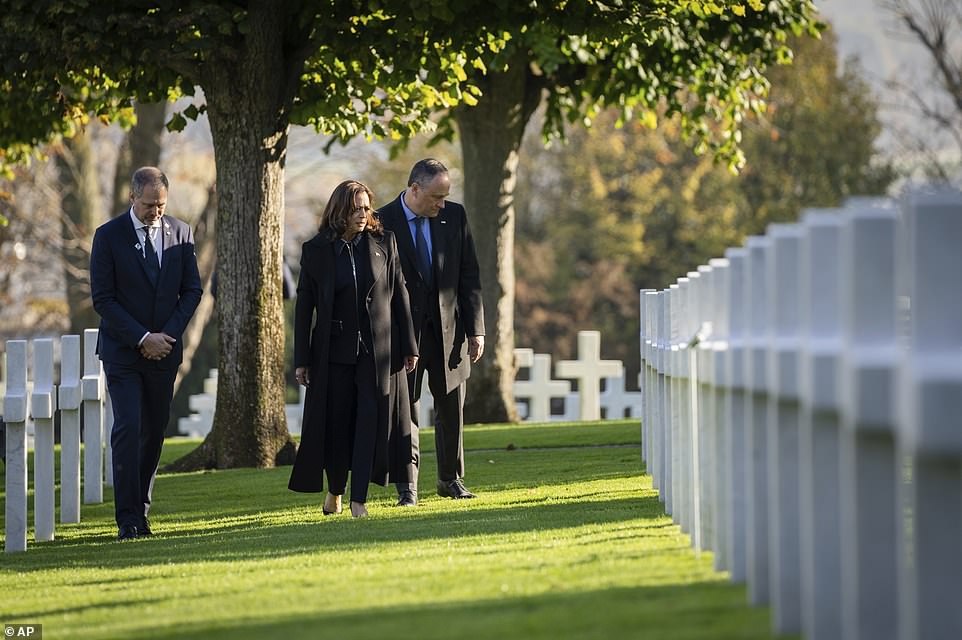 After the wreath-laying and tour, Harris will prepare for a bilateral meeting with French President Emanuel Macron while Emhoff will visit with families at the U.S. Embassy in Paris 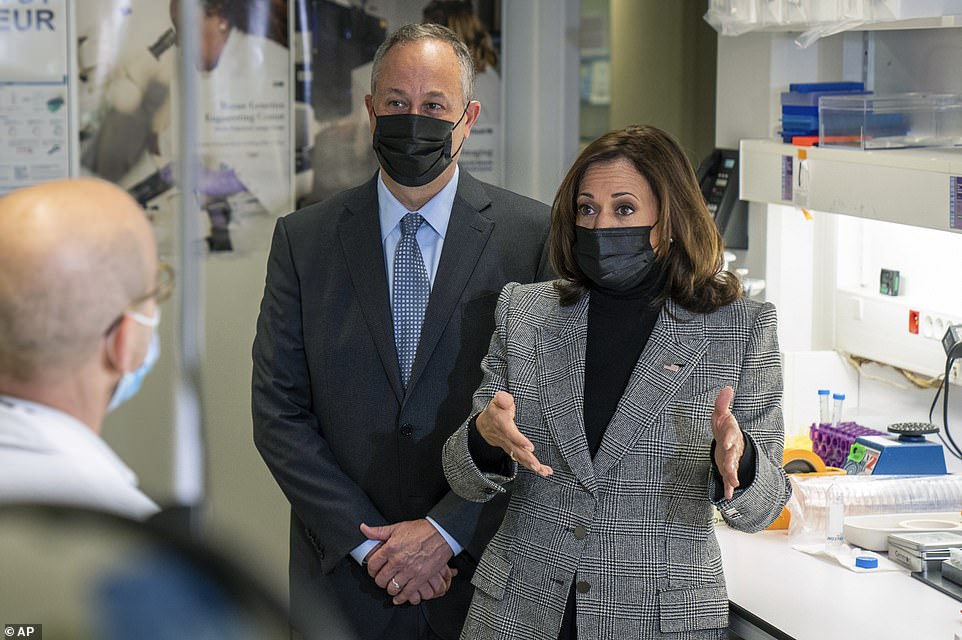 A French reporter questioned Harris during the tour of Pasteur on reconciliation tactics with France following the AUKUS rift, claiming that the institute was evidence of collaboration between Washington and Paris.

Harris agreed and spoke at length about the scientific process and how it’s better than politics because it involves hypothesis and inquiry instead of just presenting a big plan.

‘Scientists operate with a hypothesis. I love that. They start out with a hypothesis and they test it out,’ she said, adding that if it doesn’t work out ‘everyone gets together and no one gets beat up about it.’

‘With us in government we campaign with the plan – uppercase T uppercase P,’ Harris added, claiming there’s not much room for innovation and fixes if there are ‘glitches.’

She said that was a general statement and not overall comments on Bidne’s Build Back Better agenda failing to pass last month in a $3.5 trillion social spending and welfare package in Congress.

‘There will be glitches and there will be mistakes,’ she said of policy making. ‘If you don’t make the same mistake twice … that’s a good process and we should encourage it.’