Paramount+ is coming in hot. The soon-to-launch network just announced a slew of programming coming in the near future,...
Read more 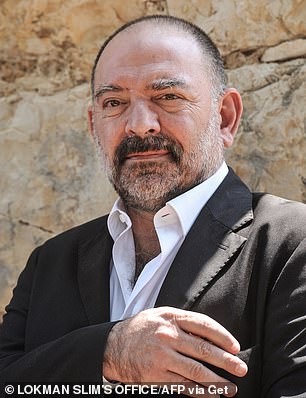 Lokman Slim, 58, had increasingly worried about his fate

A prominent Lebanese publisher and vocal critic of the Shiite militant Hezbollah group was found shot dead in his car on Thursday morning.

Lokman Slim, 58, was found slumped over the passenger seat of his car with multiple wounds from gunshots fired at close range.

He had been missing for hours late on Wednesday when his family posted social media messages looking for him.

Slim had increasingly worried about his fate. Last year he predicted that if anything happened to him, Hezbollah would likely be responsible.

His death is a brazen killing that has sparked fears of a return to political violence in the country, which is also gripped by social and economic upheaval.

To his friends, Slim was a fearless critic of Lebanon’s powerful politicians, Hezbollah and its allies Iran and Syria, and a major resource on the history of Lebanon’s civil war.

Critics, however, accused Slim of sowing sedition, undermining national unity and being a Zionist because of his criticisms of Hezbollah. 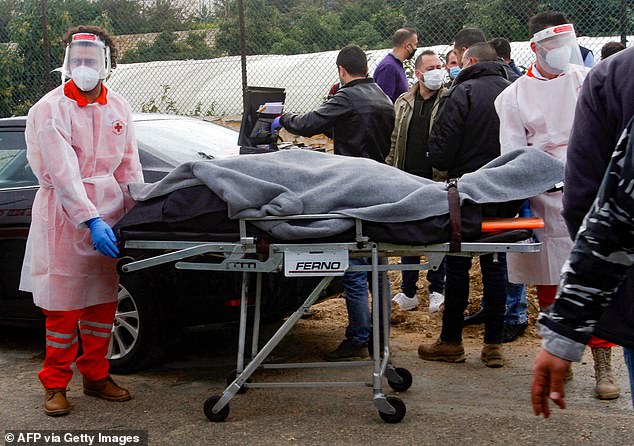 ‘He was carrying the weight of this country on his shoulder,’ his sister Rasha al-Ameer told reporters at their home after the news of the killing broke.

She said she has no faith in local investigations and that the family would carry out its own private forensic probe.

‘Up until today in the history of Lebanon, all investigations have led to a dead end,’ she told reporters. 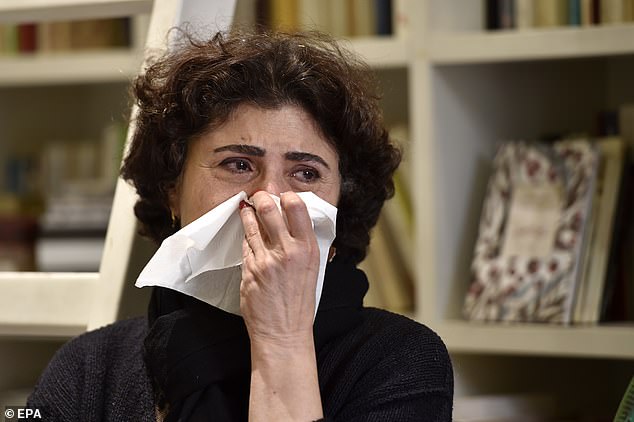 Rasha Al-Ameer, Slim’s sister, said she has no faith a local investigation into her brother’s death will bring justice and that the family would carry out its own private forensic probe 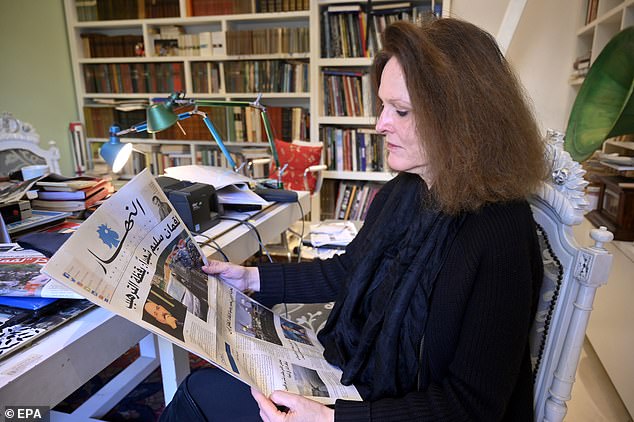 Slim’s wife, Monika Borgmann, called for an international probe into her husbands death 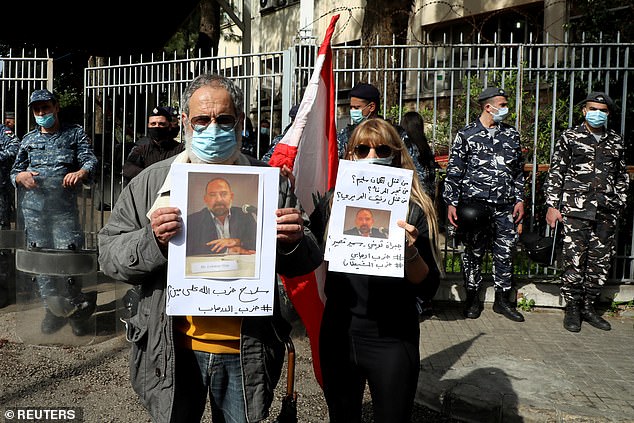 His wife, Monika Borgmann, standing next to al-Ameer, called for an international probe. ‘This killer has to be punished,’ Borgmann said.

Security forces found Slim’s car on a rural road near the southern village of Addoussieh, in Sidon province.

He was visiting friends in a southern village and was heading back to Beirut in the evening.

Afif Khafajeh, a coroner who inspected Slim’s body, said there were six bullets in Slim’s body – three in the head, one in the chest and one in the back.

Blood was splattered over the passenger car seat.

A security official at the scene said Slim’s ID, phone and gun were missing. His phone was later found.

Officials spoke to the Associated Press on condition of anonymity in line with regulations.

Lebanon has a history of political crimes and violence and with rising tension amid a deepening political dispute and economic crisis, officials have warned of a return of violence and assassinations.

Earlier on Wednesday evening, both Slim’s wife and sister posted on social media that he had not answered his phone for hours.

Al-Ameer said he left this friends’ house after 8 pm.

The family began to worry two hours later when he still had not returned home.

Al-Ameer hinted that Hezbollah was behind the killing, without naming the group, by saying it was well known which group controlled the area of southern Lebanon where her brother was found dead.

‘Killing for them is a habit,’ she said.

Hezbollah and its allies dominate the area in southern Lebanon. 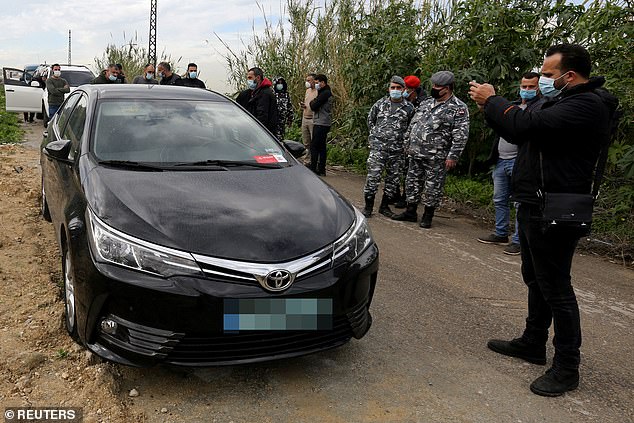 The Iranian-backed Shiite militia condemned Slim’s killing and called for a swift investigation.

The group also urged security agencies to do more to combat crimes it said have spread across Lebanon.

These crimes have been ‘exploited politically and by the media at the expense of security and domestic stability’, Hezbollah said in a jab at their critics.

But in Lebanon, perpetrators of political violence or corruption are almost never identified or prosecuted.

An investigation into the massive explosion in the Beirut port that killed 204 people and destroyed the capital last August still has not uncovered what caused it and who is responsible.

In Washington, US Secretary of State Antony Blinken condemned the killing, calling it ‘cowardly and unacceptable to resort to violence, threats, and intimidation as a means of subverting the rule of law or suppressing freedom of expression and civic activism.’

He urged Lebanese officials to act quickly to bring those response to justice. 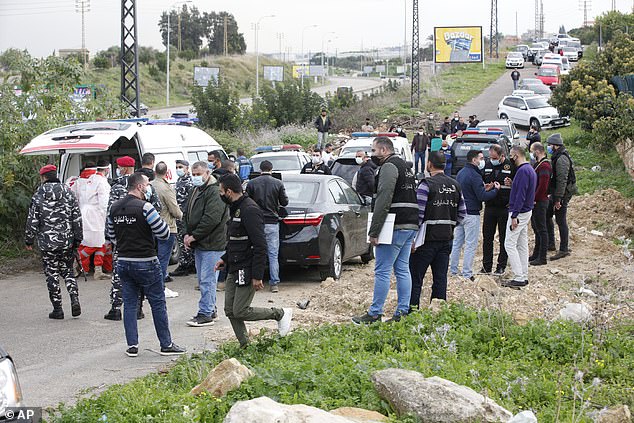 US Ambassador to Lebanon Dorothy Shea said Slim spoke publicly and privately about threats made against his life but continued his work, pushing for justice, accountability and rule of law in Lebanon.

She called the killing an attack on Lebanon itself and urged a speedy inquiry.

‘In a country that so desperately needs to recover from the multiple crises it faces, political assassinations send exactly the wrong signal to the world about what Lebanon stands for,’ she said.

‘This investigation must not follow the pattern of the Beirut port blast investigation that 6 months on remains inconclusive and without accountability.

Amnesty International’s deputy director in the region, Lynn Maalouf, said Slim was the ‘victim of this decades-old pattern of impunity which has ensured that past and present targeted killings of activists, journalists and intellectuals remain unpunished, and for which the Lebanese state is ultimately responsible.’

She also called on Lebanon to ensure a transparent investigation into the killing.

Slim was born in Beirut’s southern suburbs, a Hezbollah stronghold, where he lived all his life.

He returned home from abroad during the 2006 war with Israel when the suburbs were being bombed and most people were leaving.

He founded Umam, a research and film production house with a library documenting Lebanon’s and Shiite history.

He and his wife worked on a film documenting the atrocities of Syria’s notorious Tadmor prison.

In 2009, he and his wife organised a private viewing at their centre for an Oscar-nominated anti-war Israeli cartoon about Israel’s 1982 invasion of Lebanon and the rise of the then-President Bachir Gemayel, in defiance of Hezbollah and Lebanese authorities, which banned it.

‘It is a big tragedy,’ said Makram Rabah, a close friend and history lecturer.

‘Anyone who knows Lokman they know who his enemies are.’

Rabah said he and Slim were strong opponents of Hezbollah’s grip on power and called for sovereignty and diversity in Lebanon.

They were both attacked by a group of young men during a public debate at the height of anti-government protests in 2019.

At the time, Slim accused Hezbollah supporters of being behind the attack.

Slim also accused Hezbollah supporters days before that attack of threatening him at his home, holding rallies and hanging posters on its walls accusing him of treason.

His killing would leave many unable to sleep easily in Lebanon, Rowell said.

‘In the memory of Lokman’s fearless grin, however, they may find courage – and in the silhouettes of his cowardly murderers they may know their enemy,’ he said.

A load of golden ripe barley is nearly as pricey as the precious metal itself.“This is the highest I’ve seen it in my...
Read more