Lisa Rinna, Amelia Gray and Harry Hamlin enjoyed a family outing at the the premiere of Nat Geo’s The Hot Zone: Anthrax, in New York City.

On Monday evening the Real Housewife, 58, her model daughter, 20, and actor husband, 70, (who is in the series) were in attendance at the season two screening at Jazz at Lincoln Center.

Not in attendance was daughter Delilah, 23, who recently revealed she was battling a myriad of health issues and was hospitalized for an accidental prescription pill overdose. 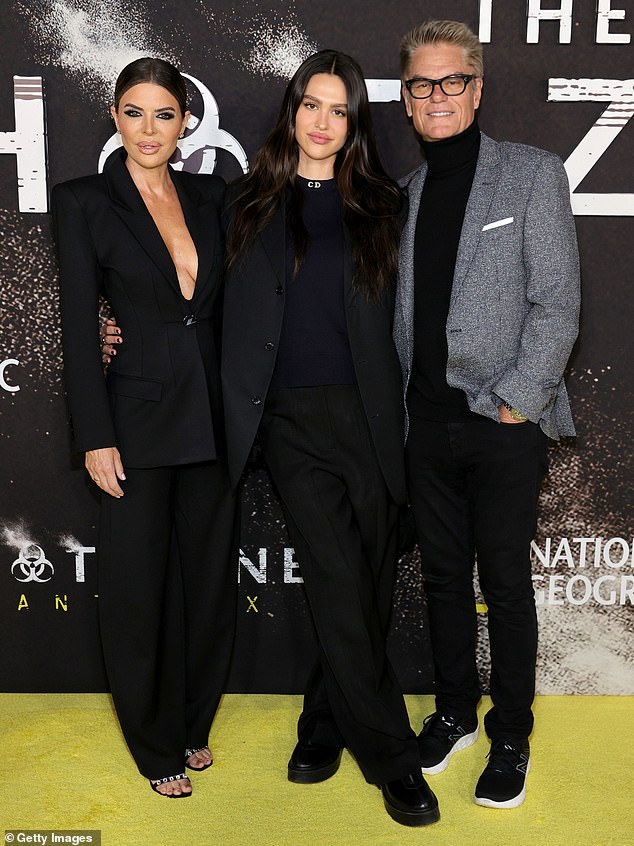 Lisa and Amelia seemed to both go with pantsuits for the event but styled them very differently.

The Bravolebrity flashed ample cleavage in the tailored black suit which was worn sans shirt and paired with heels.

The ex of Scott Disick on the other hand styled her oversized black suit with a Christian Dior sweater and a pair of combat boots.

And the patriarch of the Hamlin family who is in the Nat Geo series wore a black turtleneck, fitted jeans and a grey sport coat with New Balance sneakers. 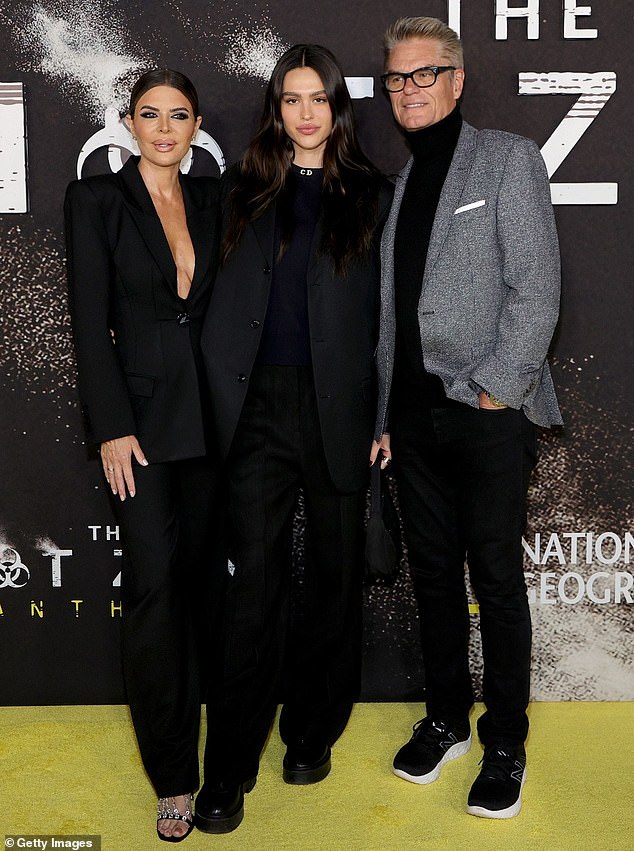 Down a daughter: Not in attendance was daughter Delilah, 23, who recently confessed to having a myriad of health struggles which led to an accidental overdose 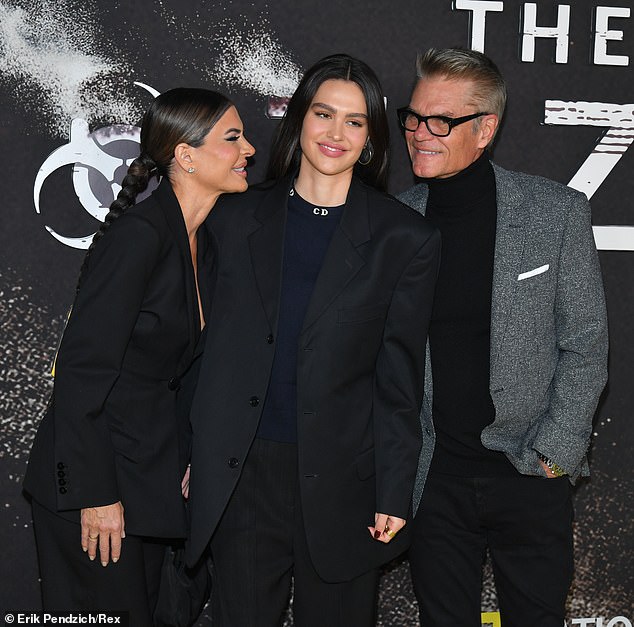 Tight knit: The Los Angeles based couple of nearly a quarter of a decade seemed to fly to NYC to visit Amelia and for the premiere of the L.A. Law actor’s new show

The Los Angeles based couple of nearly a quarter of a decade seemed to fly to NYC for the premiere of the L.A. Law star’s new show.

And as Amelia had recently made the jump to the east coast she was in attendance to support her dad, while it appeared Delilah was back on the west coast.

In an emotional Instagram video in early November, the fellow model had revealed that a myriad of health issues had flared up following her second dose of the COVID-19 vaccine — though she maintained she was not ‘anti-vax.’

She revealed that she was battling Lyme disease, Epstein-Barr virus, encephalitis, and PANDAS (Pediatric Autoimmune Neuropsychiatric Disorders Associated with Streptococcal Infections), which were diagnosed medically.

Loved up: The acting pair who married in 1997 were seen putting on a loved up display on the green carpet for the premiere of Harry’s new show 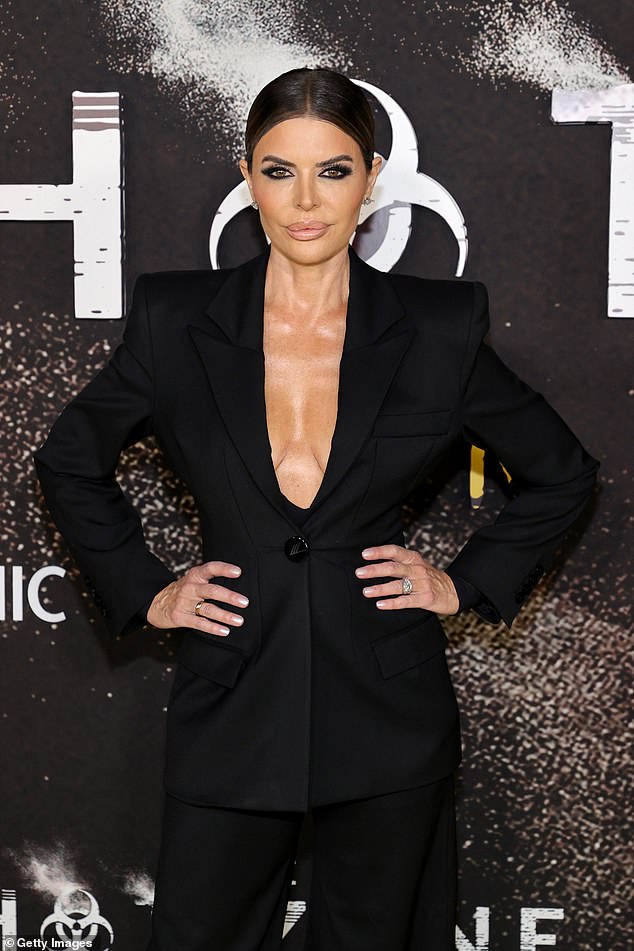 Fierce protector: After her daughter Delilah had revealed her health struggles and accidentally taking too much anti-anxiety medication with landed her in the hospital she thanked fans for the support

Bravo bash! Seeming to be a Bravo bash  Kelly Bensimon of RHONY fame was also present

From there she revealed she had been over-prescribed anti-anxiety medication including Xanax and Propranolol, and after mixing one with Benadryl she landed in the hospital.

The series of events had caused her to voluntarily check herself in to a treatment facility in Arizona before she was discharged after posing what she called a ‘medical risk’ following a seizure.

Additionally the family recently incurred another devastation as Lisa’s mom Lois — who made several appearances on the Real Housewives of Beverly Hills — passed away at the age of 93 just one week ago.

The family however looked to be enjoying a night out together in support of Harry and walked the carpet alongside the likes of former Real Housewife of New York Kelly Bensimon. 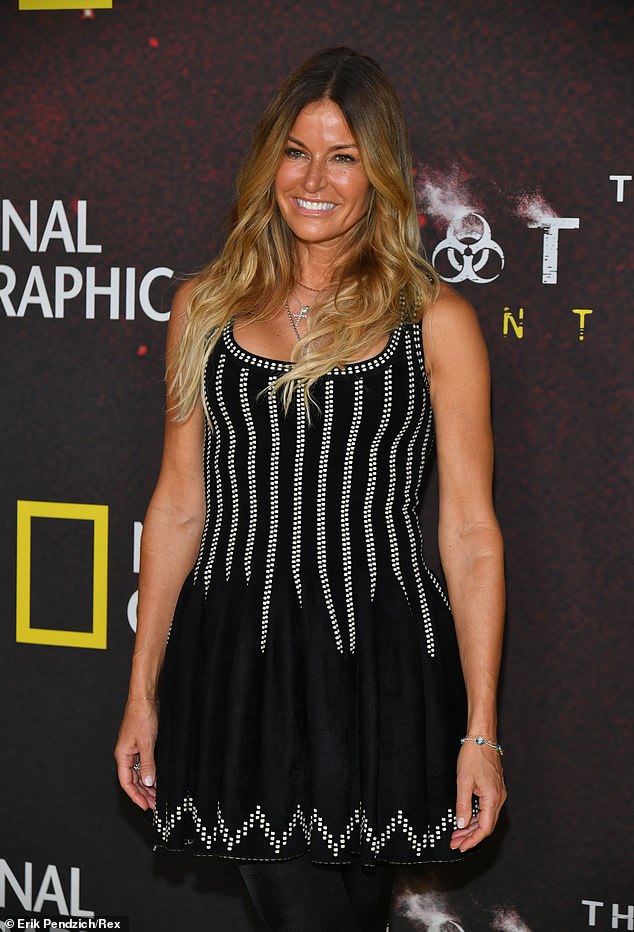 Single lady: Most recently the former model had reportedly been in flirty contact with Alex Rodriguez, before the former MLB player shut it down 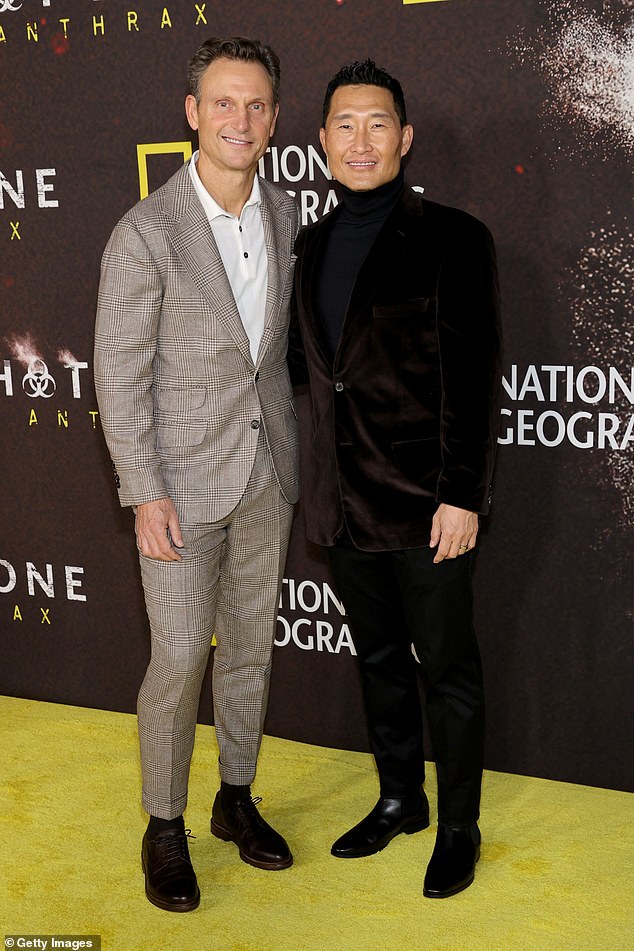 Stars: Tony Goldwyn (left) and Daniel Dae Kim (right) who star in Anthrax were pictured on the carpet

Most recently the former model had reportedly been in flirty contact with Alex Rodriguez, before the former MLB player shut it down.

‘They’ve been having a fun text relationship for the last couple of months. She thinks he is charming and a gentleman,’ Bensimon’s rep told Page Six. ‘They have mutual friends and she has been talking to him about real estate.’

A-Rod’s rep however stated: ‘There are no flirty texts, there is nothing there. A lot of people reach out to him for business purposes.’

Anthrax is the second season of the anthology series The Hot Zone, which stars Daniel Dae Kim, Tony Goldwyn and Hamlin among others. 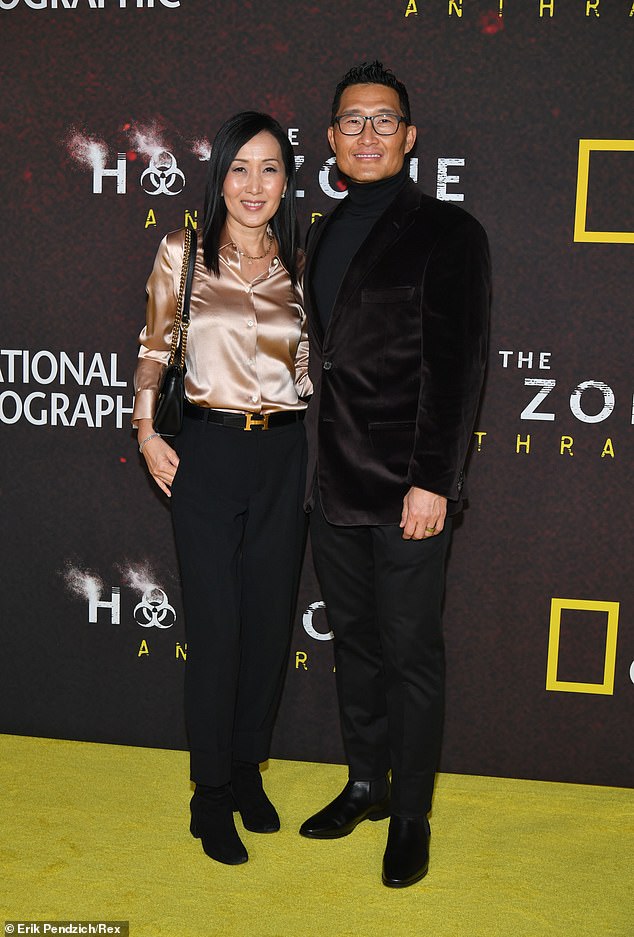 Support: Daniel was seen with his wife Mia Kim at the event 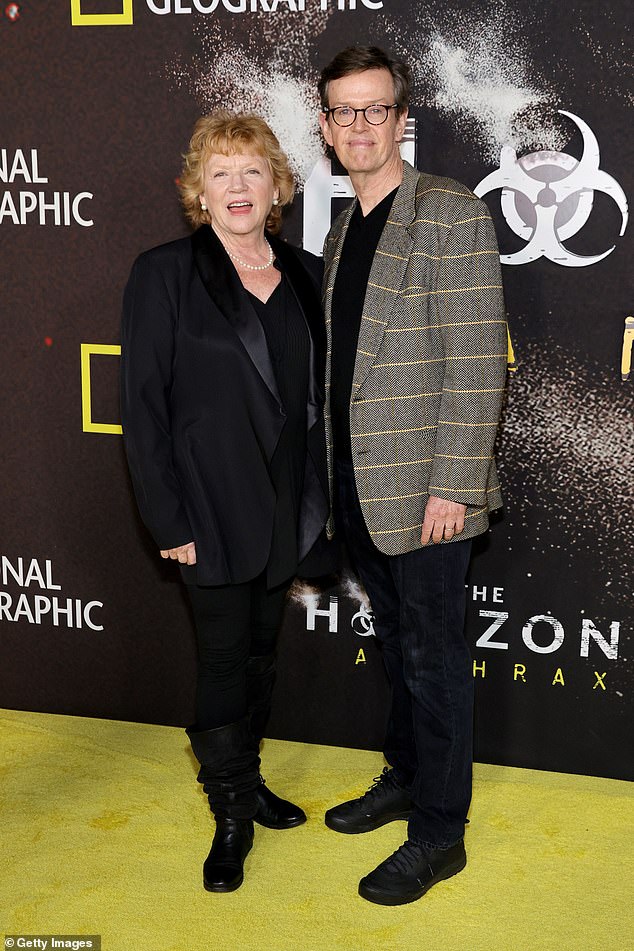 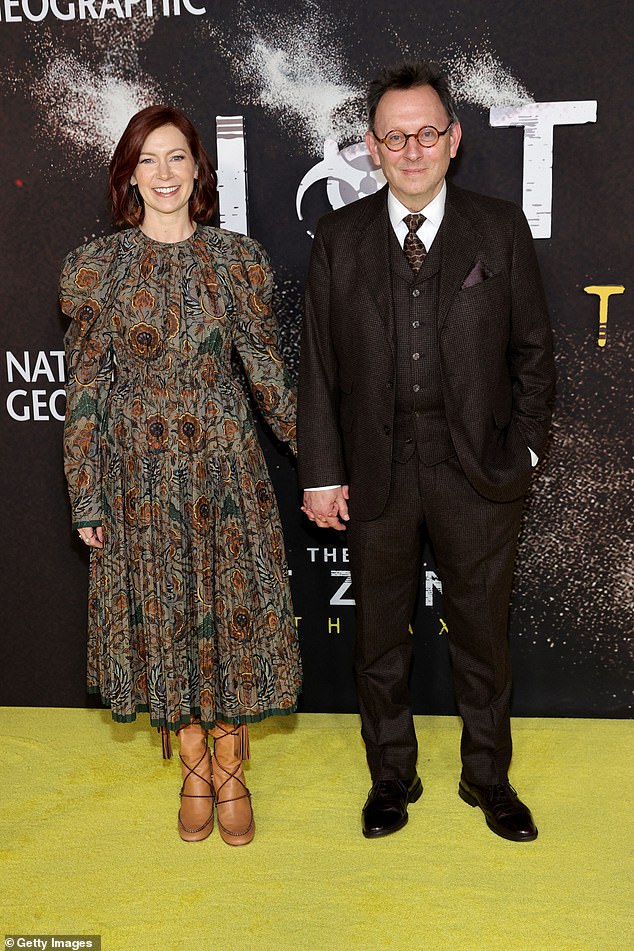 Coordinating: Carrie Preston and Michael Emerson were pictured coordinating colors for the evening 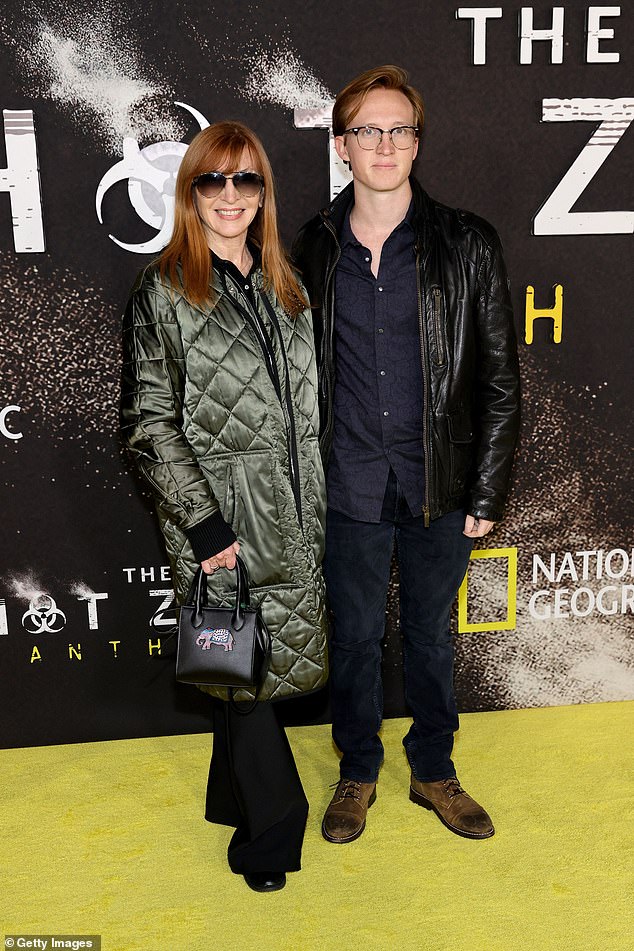 Each season of the Nat Geo show examines a different health crisis where science is a big factor to finding the solution of a potential epidemic or public panic.

Julianna Margulies and Topher Grace had additionally starred in the first season which chronicled the Ebola virus outbreak in 1989, with season two focusing on the 2001 anthrax attacks.

Upon the show’s launch in 2019, it  quickly became the network’s  most watched scripted series.

The original series was based on Richard Preston’s bestselling book of the same name. 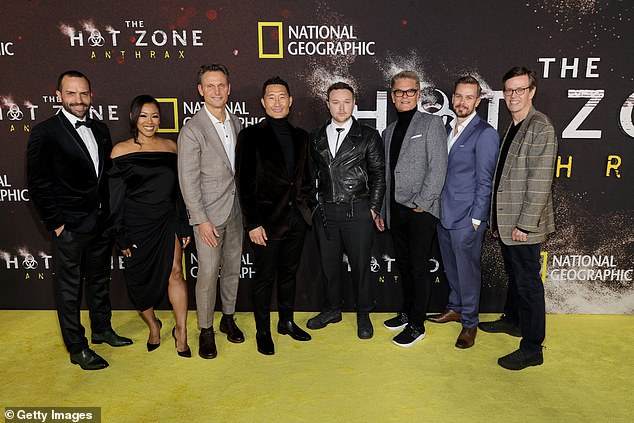