Man, 43, arrested in hunt for Michigan sniper who fired at random cars in four counties in two-week campaign of terror

By Graham Smith for MailOnline

A man has been arrested on suspicion of being the sniper who shot at random cars in four Michigan counties in two weeks.

The 43-year-old suspect was taken into custody on Monday night in Wixom, the Detroit suburb where the shootings began.

Sheriff Wriggelsworth said a tip – one of close to 3,000 that have come in – led authorities to the man’s home. He declined to disclose what the suspect told investigators.

Police said the man drove a vehicle that matched the description of the suspect’s car provided by a shooting victim. Authorities also seized potential evidence at his home, detectives said.

At least one gun was seized, said Donald Dawkins, Detroit spokesman for the U.S. Bureau of Alcohol, Tobacco, Firearms and Explosives.

The man had not been charged by last night, and it was not clear when charges might be filed.

Local and federal authorities were discussing whether the case should be pursued in state court or federal court. Sheriff Wriggelsworth said he wanted federal prosecutors to take the case.

The shootings began on October 16 and stretched from Oakland County west to Ingham County.

The targets in the 24 reported incidents were mostly cars traveling on roads near Interstate 96. Only a handful of shootings actually occurred on the interstate. 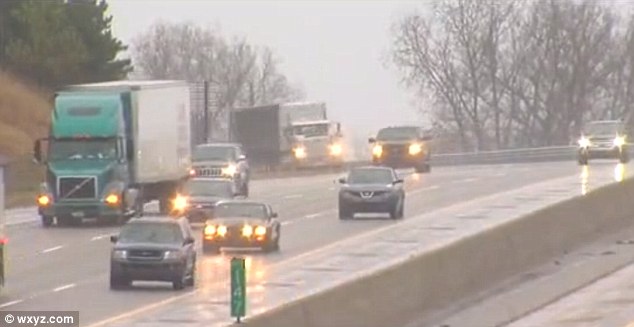 Stalking ground: The targets in the 24 reported incidents were mostly cars traveling on roads near Interstate 96 (pictured)

Janice Schumacher, 43, was pumping gas in Wixom when she heard that a suspect was in custody.

‘I hope this is the guy,’ said the Commerce Township resident who for the past several weeks has been using alternate routes to run personal errands and shuttle her three children to and from school

‘For weeks, I haven’t been able to breathe while driving with my kids in the car. If they finally got this guy, that would be a major relief.’

Before the arrest, clues appeared to be few – slugs and bullet fragments embedded in cars, metal casings on roadways, a simple black-and-white sketch of the shooter – a man believed to be in his late 20s or early 30s – and vague descriptions of the dark car he drove.

The crime scene where the shootings took place is 100 miles long and slices through suburbia, shopping malls and farm pastures.

Shootings have occurred during the day, at night, on weekdays and on weekends. Police say the shooter would drive along roadways and fire at vehicles traveling in the opposite direction. Only one person was wounded.

Initial reports of shootings stirred panic. Wixom schools restricted recess and other activities that would take students outdoors. Drivers avoided main thoroughfares where they might be exposed and stuck to side streets.

But police have been working hard to maintain calm. In Wixom – where ten shootings have been reported – police had special Halloween patrols to protect trick-or-treaters.

From Oakland County, northwest of Detroit, to Shiawassee County, northeast of Lansing, authorities stopped cars resembling the shooter’s vehicle. A $102,000 reward was offered.

‘I’ve always felt safe here. But this has been very shocking,’ said Karen Adams, 51, who lives one street away from the suspect.