The former health secretary straddled an electric Lime bike in a suit – but no crash helmet – in Trafalgar Square this afternoon.

He kept his eyes on the ground while he waited for the traffic lights to change as a surprised moped rider stared at him.

Mr Hancock was booted out of the Cabinet by Boris Johnson after his affair with colleague Gina Coladangelo was exposed in June.

He left his wife Martha – who is battling long Covid – and shacked up with the businesswoman and the pair holidayed in the Swiss Alps earlier this month.

Instead Liz Truss, Nadine Dorries and Michael Gove were called up to high offices of state. 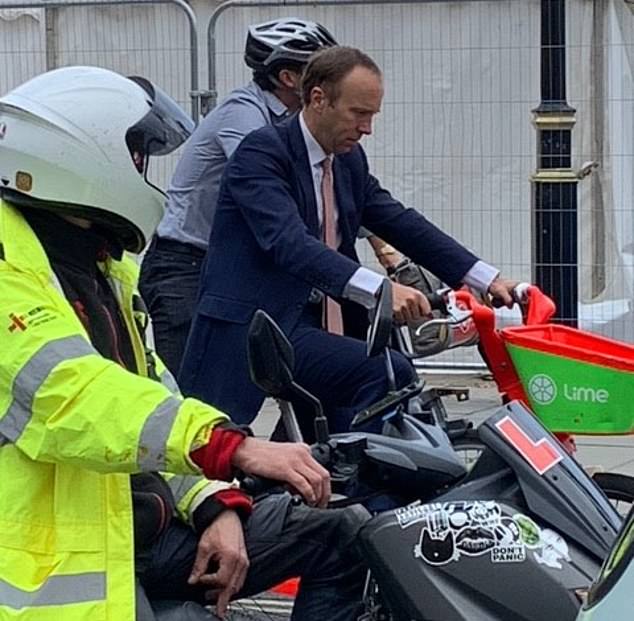 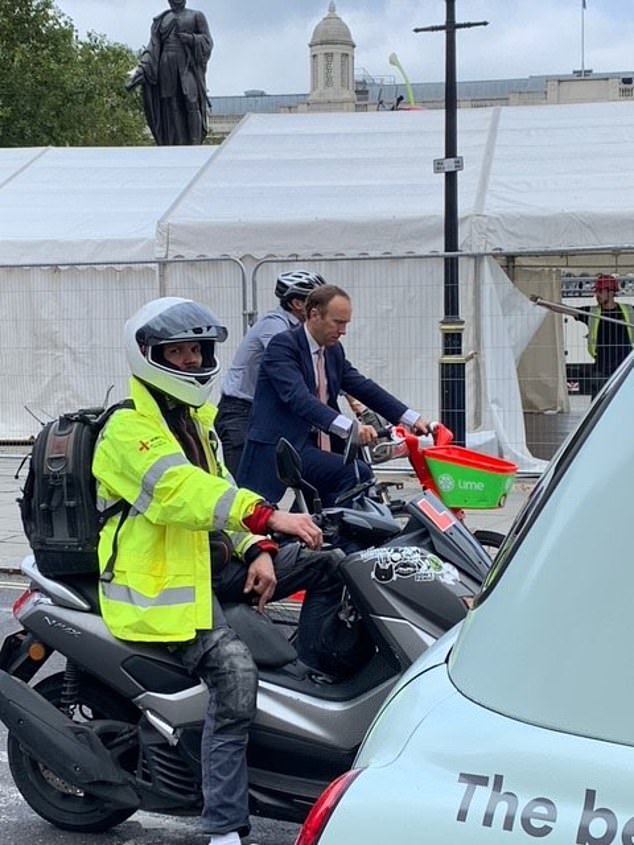 Mr Hancock was spotted in Trafalgar Square next to the junction with Northumberland Avenue this afternoon.

He stopped at traffic lights in the shadow of the statue to General Sir Charles James Napier, a military chief who conquered the Sindh province in what is now Pakistan.

The MP was a five-minute cycle away from his old stomping ground at the Department for Health, where he had his affair with Ms Coladangelo.

He was caught on CCTV snogging his ministerial aide in their offices, which was leaked to the press.

He has since left his wife Martha and shacked up with Ms Coladangelo, who ditched her husband Oliver Tress – the founder of the Oliver Bonas brand.

Mrs Hancock is said to be feeling ‘very low’ in the wake of her husband’s affair as she battles long Covid.

Friends of the 44-year-old say she has been at the family home ‘desperately trying to keep it together’ for their three children. 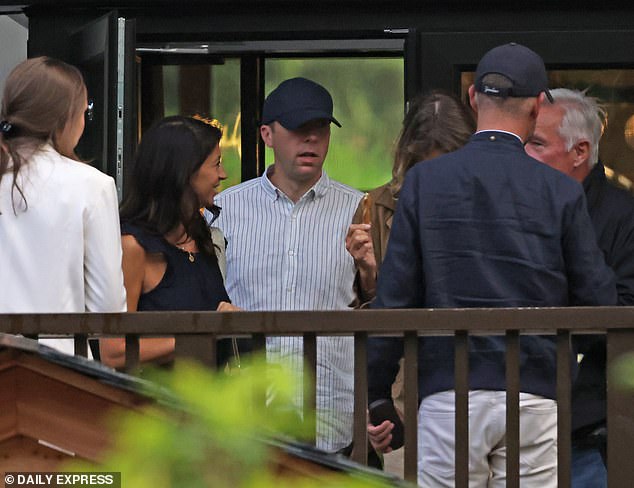 Mr Hancock was booted out of the Cabinet by Boris Johnson after his affair with colleague Gina Coladangelo was exposed in June. Pictured: On holiday together this month 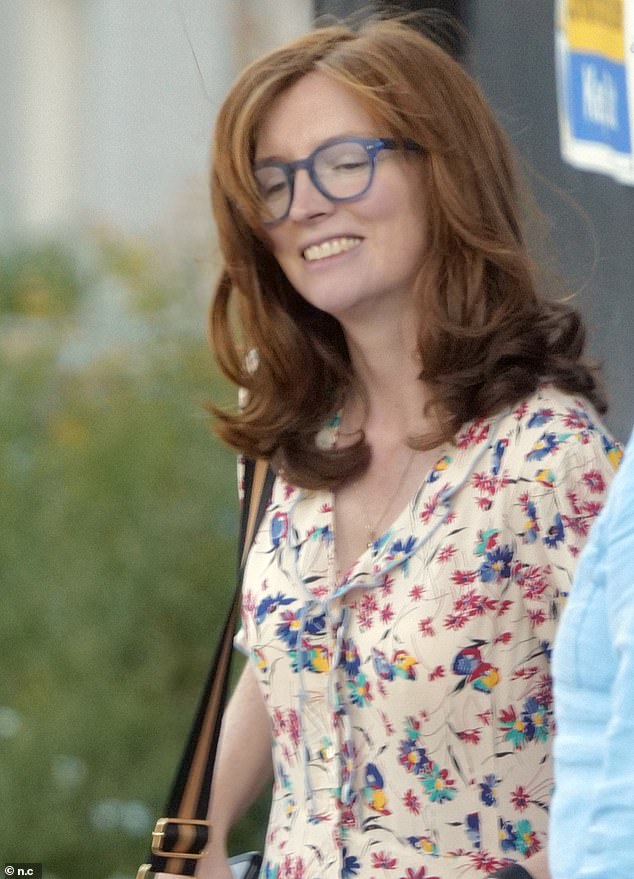 A friend told MailOnline this month: ‘The suggestion Martha is ‘getting on with life’ is so far from the truth – in fact she has long Covid and is absolutely shattered.

‘Matt is being a complete a******* to her, issuing demands while poor Martha is at breaking point, but trying desperately to keep it all together for the kids, one of whom had to start school last week.

‘Her family are rallying round her but she is very low after an awful few months, and worried about her children.’

Meanwhile Mr Hancock has been enjoying his new romance as they jetted off to the Swiss Alps together.

Earlier this month they were spotted heading out for dinner with friends as they enjoyed their first romantic getaway as a couple.

The 42-year-old and Ms Coladangelo, 44, appeared in high spirits as they emerged from their £87-a-night hotel tucked away in the mountains near Montreux.

The pair were staying at The Villars Mountain Lodge, described on the hotel’s website as ‘resolutely modern and at the same time delightfully authentic’. 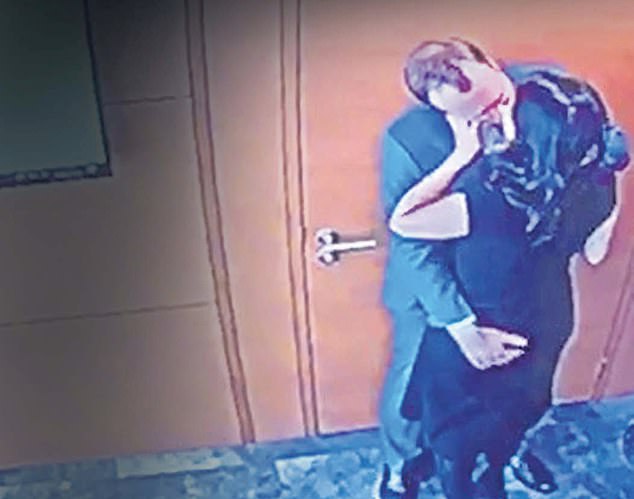 Back in Westminster today Mr Johnson conducted a major reshuffle of top players in his Cabinet.

Liz Truss has been appointed Foreign Secretary and Michael Gove was given a key role while Dominic Raab was demoted and Gavin Williamson sacked.

Mr Raab was moved from the Foreign Office to Justice Secretary but, while he was also handed the title of Deputy Prime Minister, he was clearly moved down.

Two of the great offices of state are now held by women after Ms Truss was promoted and Priti Patel kept her role of Home Secretary.

Mr Williamson’s ousting after extensive criticism over his handling of the pandemic in schools paved the way for Nadhim Zahawi to be promoted to Education Secretary. 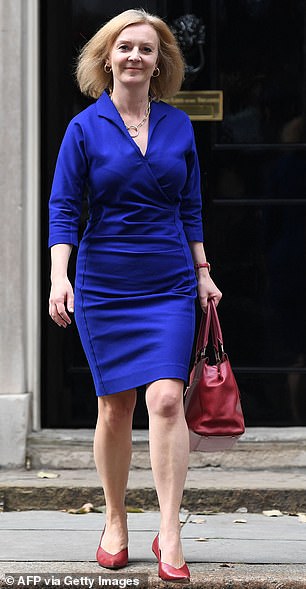 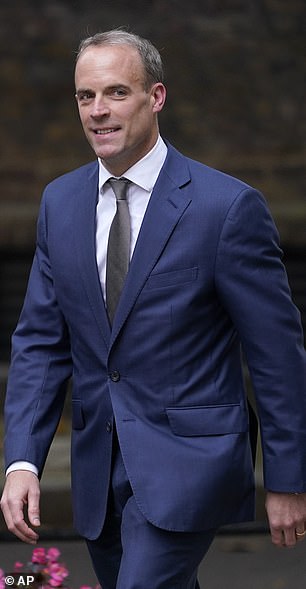 Liz Truss (left) has replaced Dominic Raab (right) as Foreign Secretary, only the second woman to hold the great office of state

Not only did Mr Gove succeed Mr Jenrick as Housing Secretary but the PM entrusted him with a further key position in the post-coronavirus agenda.

He handed him responsibility for ‘levelling up’ while maintaining his role trying to ward off Scottish independence.

Oliver Dowden moves from culture secretary to replace Ms Milling as co-chairman of the Tory Party, as well as holding the title Minister without Portfolio.

Nadine Dorries, a best-selling author and former star of I’m a Celebrity… Get Me Out of Here, becomes Culture Secretary.

And Steve Barclay succeeded Mr Gove as Chancellor of the Duchy of Lancaster and minister for the Cabinet Office.

Mr Hancock remains a backbencher as the Conservative MP for West Suffolk.