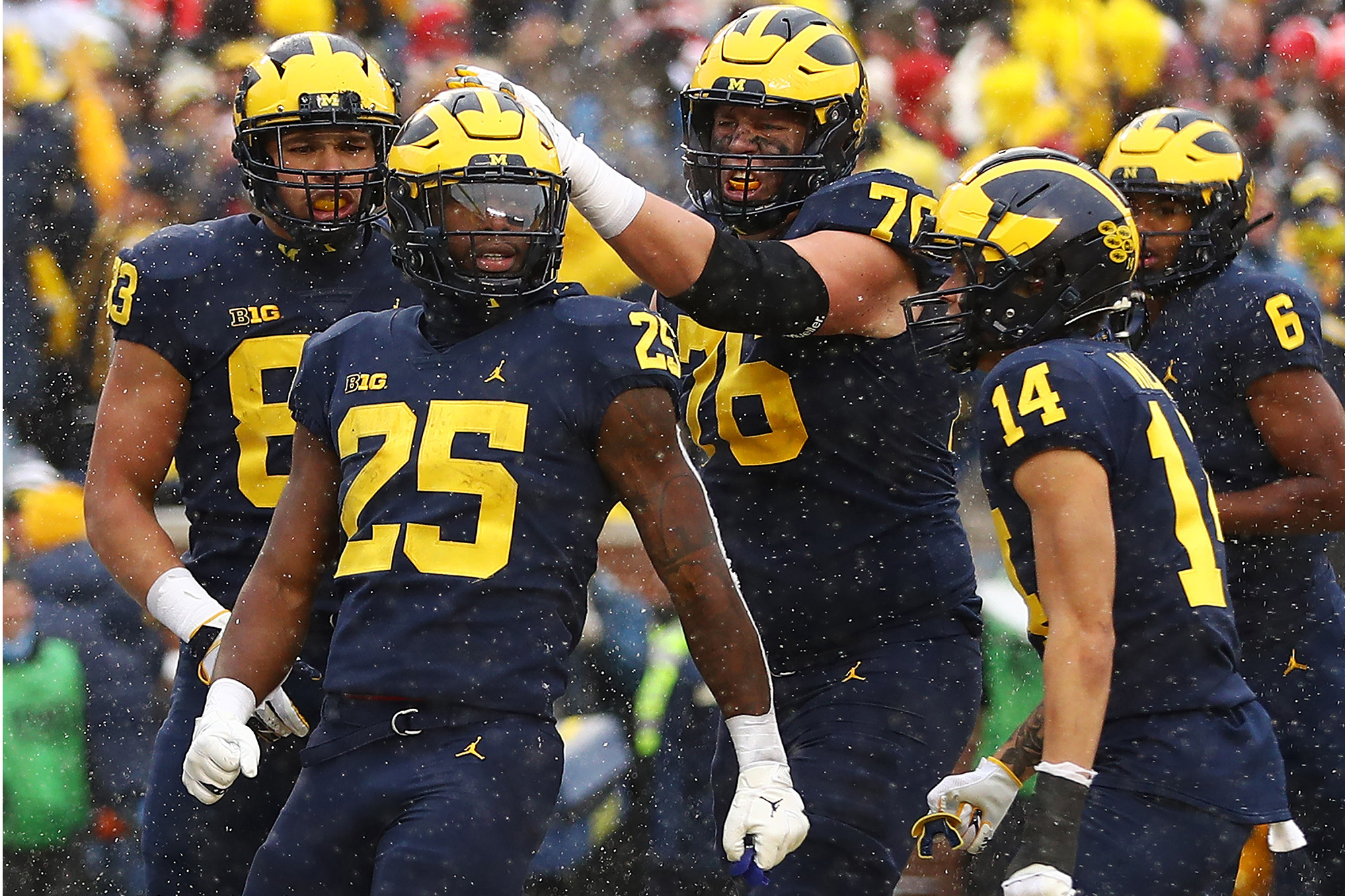 ANN ARBOR, Mich. — Hassan Haskins scored five touchdowns and Aidan Hutchinson had three sacks, helping No. 6 Michigan finally beat No. 2 Ohio State 42-27 Saturday to give Jim Harbaugh his first win as a coach against the Buckeyes.

The Wolverines clinched the Big Ten East and will play in the conference title game next week with playoff hopes in hand.

Minutes after the game, long-suffering fans filled the Big House turf to celebrate a rare win in the storied series and they were in no rush to leave as music blared.

Ohio State had won a school-record eight straight in the rivalry and 15 of 16 to turn The Game into its game.

The Buckeyes (10-2, 8-1) blew their chances to continue their dominance with 10 penalties, many before the snap, and because they simply could not stop Michigan’s running game.

Harbaugh clearly had his team ready to beat the Buckeyes.

After Harbaugh’s pay was slashed in his new deal last winter in part because of his lack of success against the Buckeyes, he reshaped his coaching staff again and renamed a running-heavy period of practice the “Beat Ohio,” drill for to add another layer of focus on the rivalry.

It seemed to work.

Haskins had 169 yards rushing on 28 carries, scoring a go-ahead touchdown late in the second half and four more after halftime to pad Michigan’s lead. Blake Corum returned from a two-plus game absence to run six times for 87 yards, helping the Wolverines gain a total of 297 yards on a ground against a rival that has pushed them around for much of this century.

Harbaugh also seemed to out coach Ryan Day, who had not lost a Big Ten game, by sprinkling in some surprise plays such as a slot-around with A.J. Henning running for a 14-yard run to cap the game-opening 10-play, 75-yard drive.

And in the end, the Buckeyes looked like they had enough when they didn’t put up much of a fight on Haskins’ 4-yard run with 2:17 left that gave Michigan a 15-point lead.

Ohio State’s high-powered offense seemed rattled against Michigan’s new-look defense with first-year coordinator Mike Macdonald making all the right moves. Hutchinson, who set a single-season school record with 13 sacks, was in the backfield all day.

C.J. Stroud was 34 of 49 for 394 with two touchdowns, including a 25-yard pass to Garrett Wilson that gave the Buckeyes a 10-7 lead early in the second quarter. The Buckeyes turned it over on downs on their last possession, failing to protect Stroud. He was sacked four times, doubling the total from any other game this season.

Ohio State’s high-powered offense put up some big numbers through the air and solid ones on the ground, but not on the scoreboard where it mattered most.