There have been more than 22,000 migrant crossings this year, with at least 100 sailing across the Channel overnight and 695 making the perilous journey yesterday.

Home Office figures show that nearly 1,200 migrants have landed on the shores of the UK in two days, following a daily record of 853 migrants who sailed from northern France in 25 boats last Wednesday as they take advantage of calmer seas.

More than 22,300 migrants have crossed by boat this year – up from 8,400 last year – after at least 100 landed overnight. This morning, two boats containing around 50 migrants were brought into Dover Marina by the RNLI before dawn. Another 30 landed at 8.30am.

Border Force chiefs had been planning for 2,000 crossings in November, with a source telling The Telegraph: ‘Officers have told clandestine threat command repeatedly there is no basis for believing the surge in numbers would fall away over winter.’

The surge is likely to deepen tensions between London and Paris after Emmanuel Macron’s government promised to stop migrants leaving their beaches through increased patrols in return for £54million.

The Home Secretary, Priti Patel, approved the first installment of the sum last week following assurances from her French counterpart Gerald Darmanin that 100 per cent of the boats would be intercepted if the UK pays the full amount. However, fewer than half of the migrants have been stopped by French authorities, The Times reported. And France has raised the prospect of ending checks on migrants unless Britain backs down in the ongoing post-Brexit dispute over fishing licences.

A furious Government source warned: ‘The French have serious questions to answer.’

Dan O’Mahoney, Clandestine Channel Threat Commander, said: ‘Migrants making these dangerous crossings are putting their lives at risk and it is vital we do everything we can to prevent them and break the business model of the criminal gangs exploiting people. As part of our response it is important we have a maritime deterrent in the channel and Border Force officers are authorised to use safe and legal options for stopping small boats.’

The Mayor of Calais, Natacha Bouchart, previously branded the UK an ‘Eldorado’ for illegal migrants and ‘lacks the courage’ to tighten its laws to deter Channel crossings in a call for showdown talks between the Prime Minister and the French President.

It comes as documents leaked to The Guardian suggested Miss Patel is likely to lose a legal challenge if she implements her controversial ‘pushback’ policy for Channel migrants. 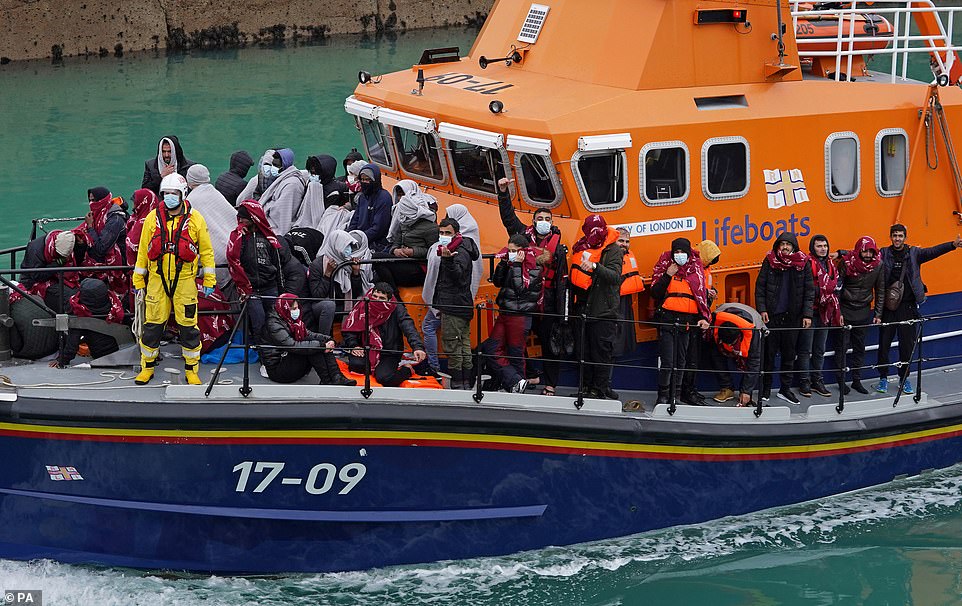 Two boats containing around 50 migrants were brought into Dover Marina by the RNLI before dawn. Another 30 landed at 8.30am on Thursday, November 11 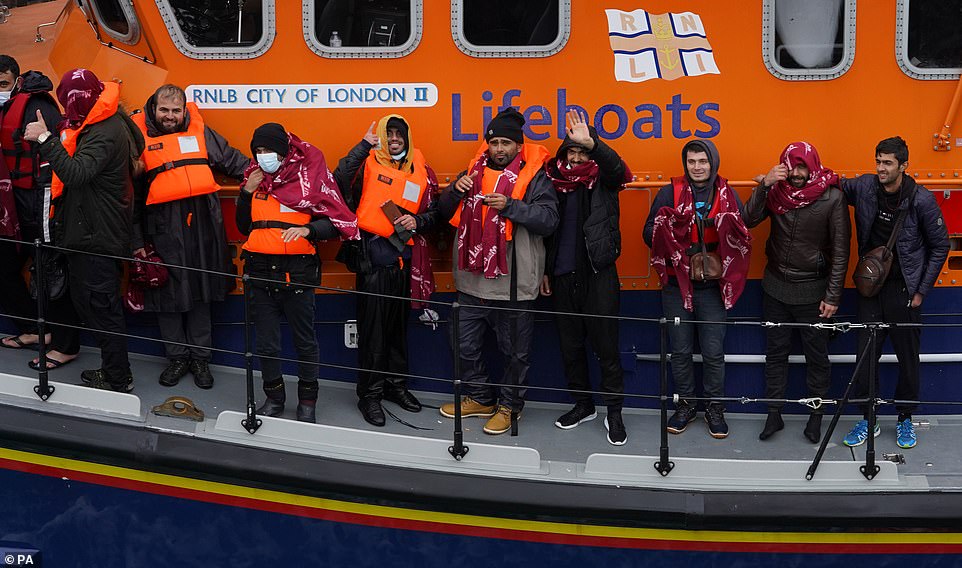 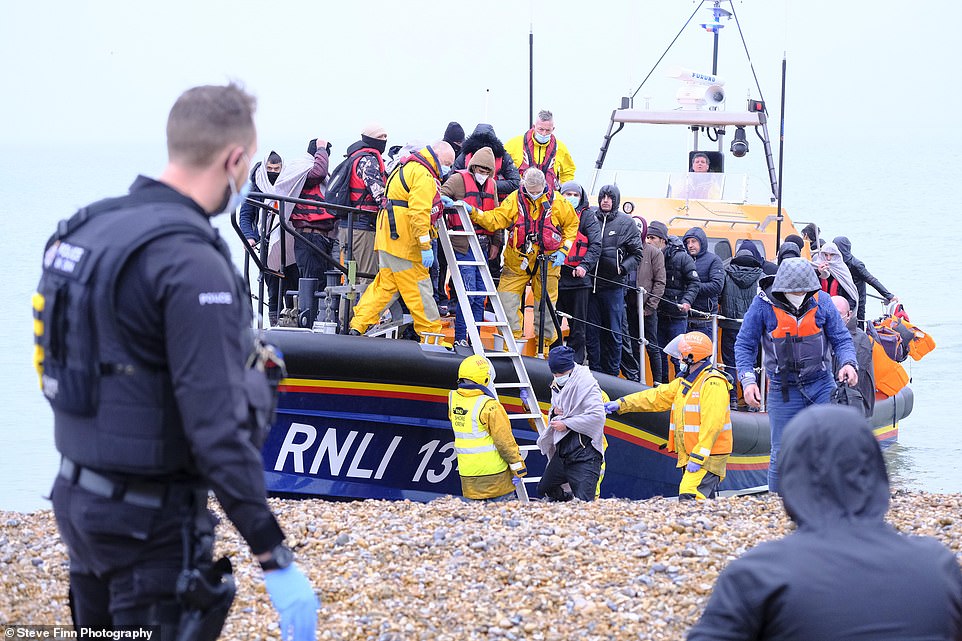 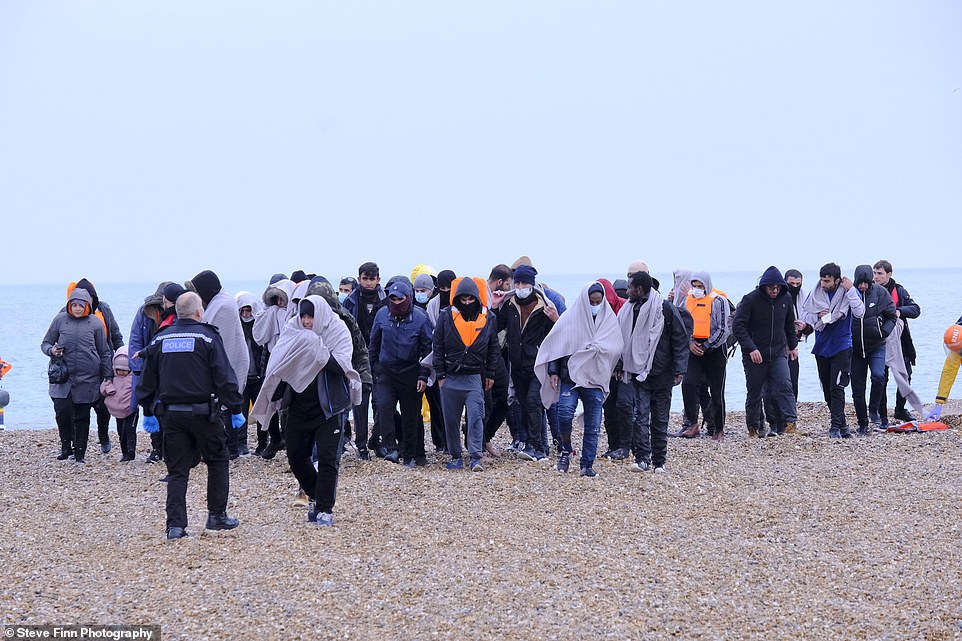 Home Office figures show that nearly 1,200 migrants have landed on the shores of southern England in two days. Pictured, migrants landing in Dungeness 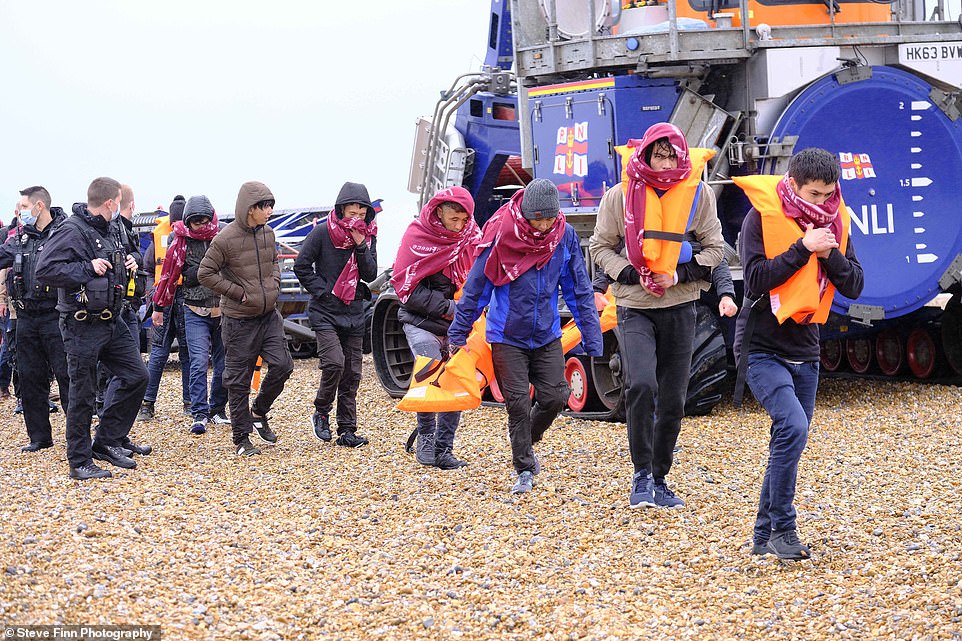 Border Force chiefs had been planning for 2,000 crossings in November. Pictured, migrants landing in Dungeness 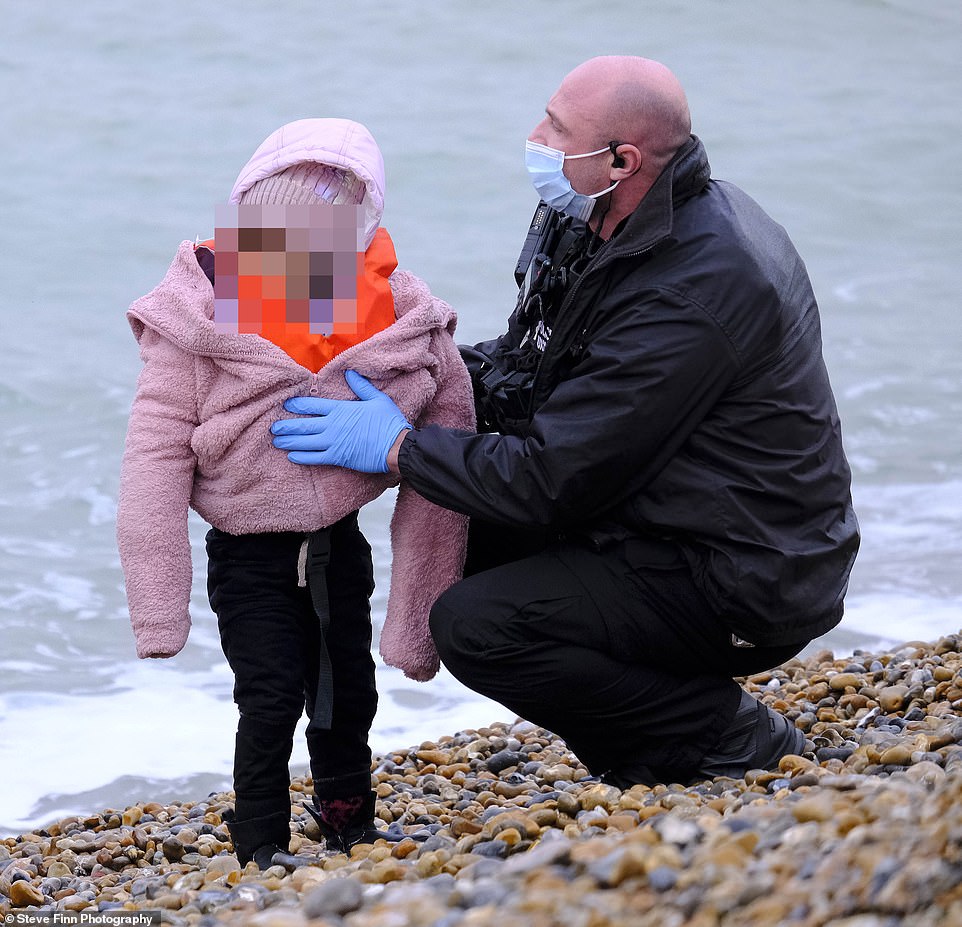 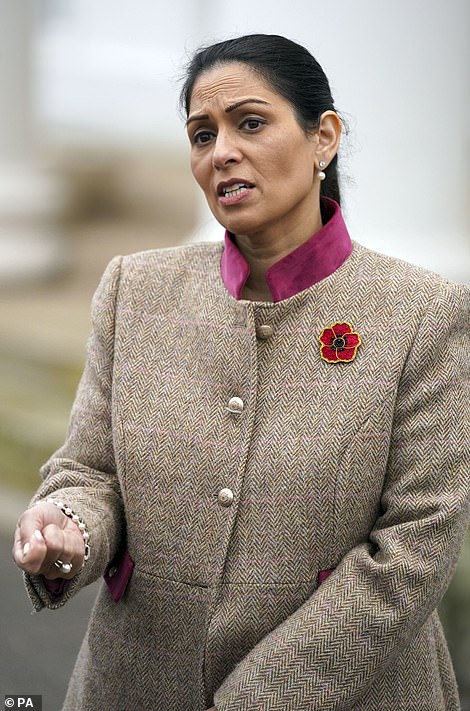 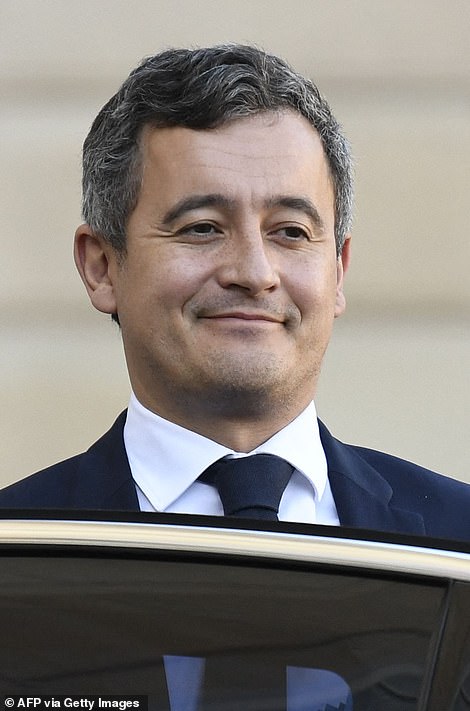 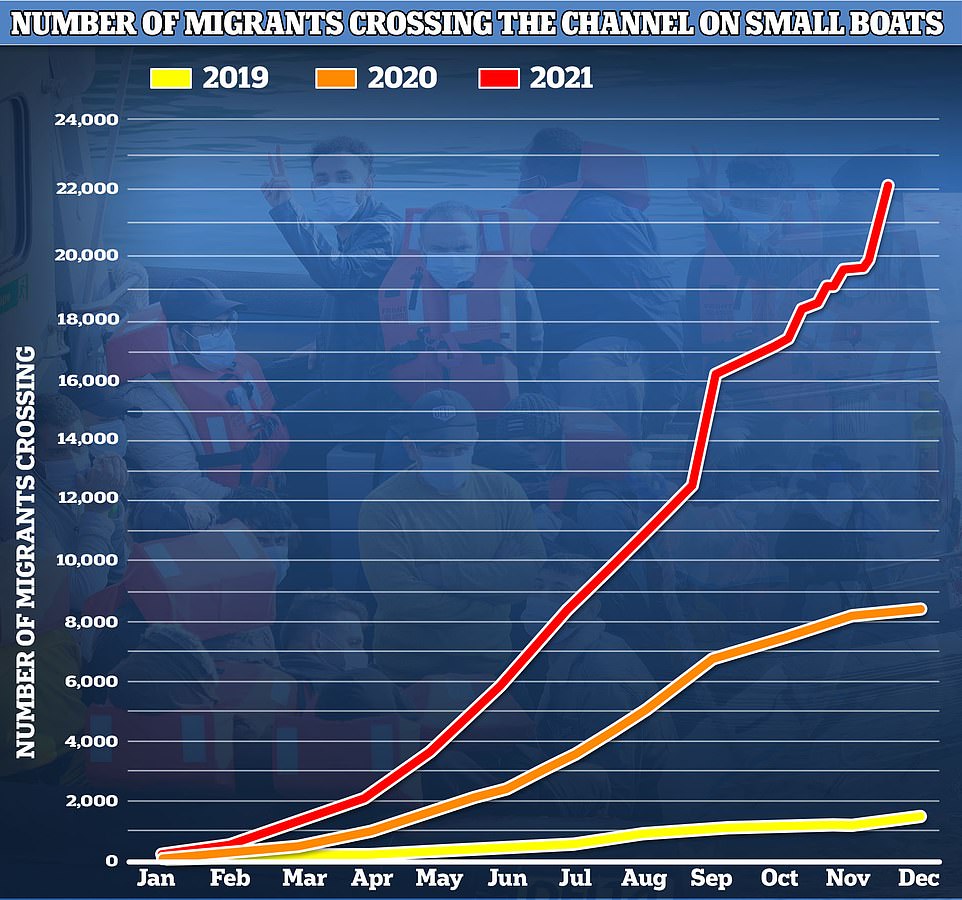 Government lawyers have told the Home Secretary that the odds of successfully defending a challenge in the courts against the lawfulness of plans to send vessels carrying people back to France is ‘less than 30 per cent’, according to internal Home Office papers.

A Government source told the paper a leak inquiry had been launched amid concerns ‘there is someone who thinks leaking advice from the attorney general with the intent to damage government’.

The documents also show that the Attorney General’s office has told the Home Office that it should expect a legal challenge on the ‘turnaround’ tactic. It said any challenge could be ‘reputationally damaging’ and force the policy to be suspended for months.

‘Whilst confirmation that the tactics are lawful would be very welcome, legal advice is that a ruling against the government is the more likely outcome in relation to vires. Counsel has advised that the prospect of successfully defending a claim on vires is less than 30 per cent,’ it said.

It added: ‘The Attorney General said the Government should expect a legal challenge on the tactic. A challenge could be brought by the representatives of any migrant subject to the tactic or by a migrant pressure group to the policy itself.

‘While the prospects of successful challenge are highest in relation to vires, a challenge would likely be brought on grounds relating to proportionality and compliance with the Government’s obligations under the Human Rights Act.’

On Wednesday, more than 500 migrants crossed the Channel by boat as Border Force were called to rescue 504 people in 16 incidents.

French authorities also stopped 307 migrants attempting the treacherous trip in eight boats. It was another busy day for search and rescue services with calm seas and good visibility across the 21-mile Dover Strait. 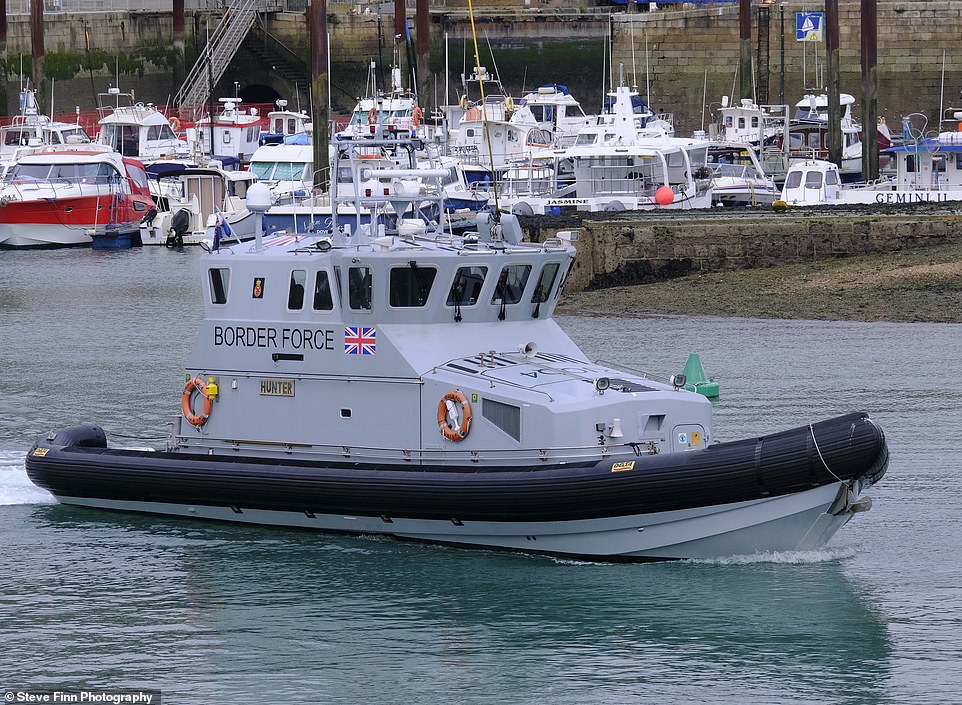 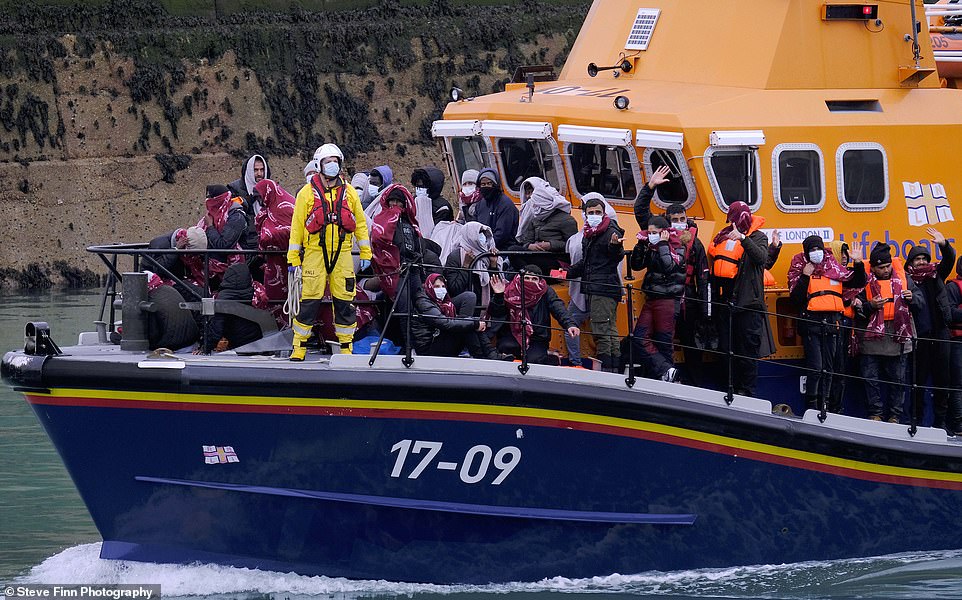 The first arrivals came in to Dover Marina, Kent, at around 3am under the cover of darkness 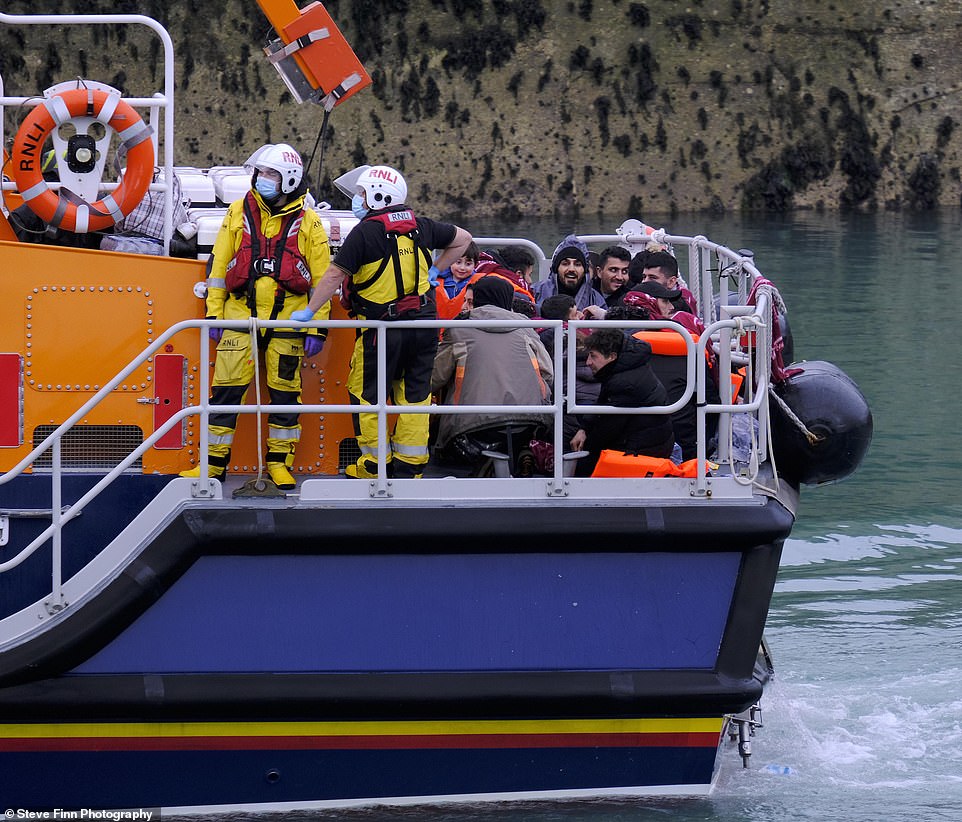 The first arrivals came in to Dover Marina, Kent, at around 3am under the cover of darkness. They were followed by dozens more on board Border Force vessel Hunter shortly before 7am.

Many were huddling red blankets for warmth and carried bin bags full of possessions as they were escorted up the gangway for processing by Immigration Enforcement.

The RNLI’s Dover Lifeboat was also involved with rescue missions and transported around 40 to the harbour. One man could be seen saluting for the cameras before around 14 more people were brought to safety.

The Dungeness Lifeboat was also busy rescuing around 40 migrants and bringing them on to the shingle.

The group included a little girl wearing a pink coat holding the hands of a man and woman as she walked up the beach. And one man was seen kneeling down and appearing to kiss the pebbles in celebration of making the dangerous trip.

Rough seas and extreme weather conditions have made the journey all the more dangerous but people-smuggling gangs continue to operate.

This was exposed on Monday morning when a fishing ship discovered a body adrift off Octeville-sur-Mer. The person, who has not been confirmed to be a migrant, was taken to the port of Le Havre and confirmed dead by a doctor. Le Havre prosecutor’s office has opened an investigation, which was entrusted to the maritime gendarmerie.

It comes after four migrants were known to have died in the past fortnight with others believed to be missing and presumed dead. So far in November, 2,348 migrants have arrived in 59 boats.