Josef Martinez of Atlanta United FC broke the record for the most number of goals scored during a single season in Major League Soccer on Friday night.

To celebrate his achievement, EA Sports is rewarding him with a brand new Record Breaker upgrade to his card in FIFA 18 Ultimate Team.

It certainly has impressive stats, but it probably won’t set the world alight when compared to the upgrades that some other strikers have received towards the end of the FIFA year. 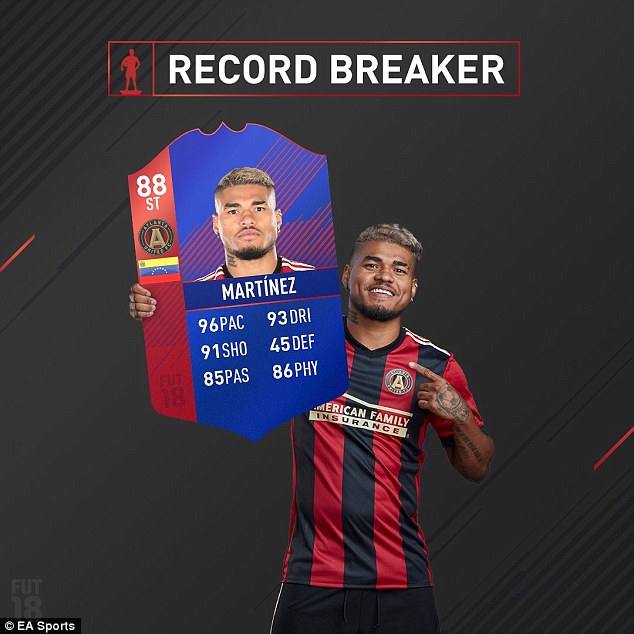 Josef Martinez scored his 28th goal of the season for Atlanta in a 2-1 victory over Orlando City. He broke the record previously set by Roy Lassiter, Chris Wondolowski, and Bradley Wright-Phillips, who all had 27. The 25 year old still has eight games remaining in the season as well.

He’s also scored in his last nine matches, which is a tie for the longest streak in the league’s history.

Martinez has 96 pace, 93 dribbling, 91 shooting, 85 passing, and 86 physical. Combined with three star skill moves and a four star weak foot, he’s definitely a force to be reckoned with up front.

The 91 stat in shooting is very nice indeed, however you’ll need to be getting him into the box and shooting from short range, as his long shots stat is down at just 76. He’s not that great at penalties either, with just a 71 rating.

The main problem will be which kind of team to put him in. There aren’t many other top Venezuelan players around, and the MLS isn’t exactly the most popular league out there in Ultimate Team.

But there’s certainly a good squad to be made from the MLS, especially considering a lot of the players are cheaper than other leagues, especially compared to the top European leagues.

A combination of Record Breaker Martinez and In-Form Romain Alessandrini up front would be a deadly duo in front of goal, for instance.

Martinez’s upgrade will be available when Team of the Week launches this Wednesday.