These are the fresh faces of some of the heroic ‘boy soldiers’ who fought for their country in the First World War.

Boys as young as 13 served overseas as a patriotic fervour swept over Britain in the war with Germany.

Many who joined up believed that the war would be over in a matter of months, but it in fact lasted for more than 4 years.

The fresh-faced boys participated in some of the war’s bloodiest battles, including Ypres, the Somme and Gallipoli.

It is believed that more than 400,000 underage soldiers signed up to ‘do their duty’, with quarter of a million entering battle and thousands dying.

Their inspiring stories are told by historian Richard Van Emden in his new book, Boy Soldiers of the Great War.

Whilst some of the boys mentioned in Mr Van Emden’s book were among the more than 800,000 Britons to die in the conflict, others survived the war.

On the outbreak of war in 1914, Britain was was the only major power to not begin with a mass conscripted army.

When it became clear that the professional but very small British Army was not large enough, thousands of men joined up in a wave of patriotic fervour.

These new units were known as ‘Pals Battalions’ due to the fact the men saw themselves as belonging together because of their loyalty to the areas they came from and the men whom they worked with. 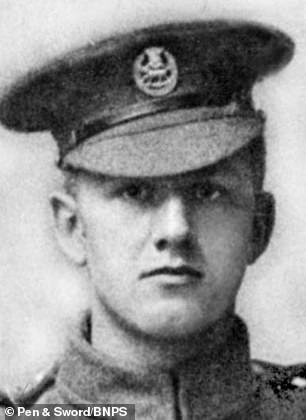 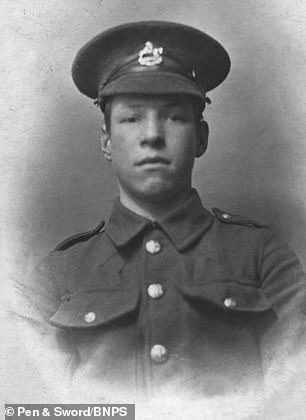 These are the fresh faces of some of the heroic ‘boy soldiers’ who fought for their country in the First World War. Left: Frank Lindley, who joined up at the age of just 14 to avenge the death of his brother. He survived the war. Right: Private James Alex Thomas, who died aged 15

Private Hudson, of the City of London Regiment, served in France aged 14 and was killed in action on the Western Front on July 28, 1916, aged 15 years and 28 days.

He also sheds light on the poignant tale of Private James Thomas, of the 17th King’s Regiment, who perished aged 15 years and one month near Guillemont.

Sixteen-year-old Private Thomas Bull, of the 8th Royal Welsh Fusiliers, lost his life 12 hours before the final evacuation of the Gallipoli Peninsula in January 1916. He was aged 16. 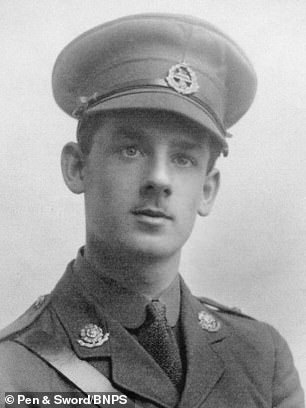 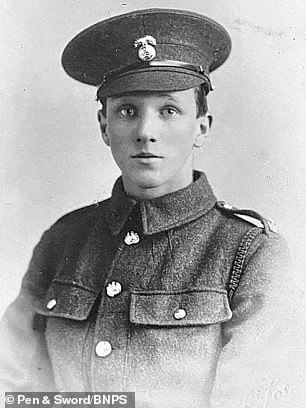 Second Lieutenant Reginald Battersby (left) was commissioned into the army at the age of 15. He led his platoon, the 11th East Regiment, into battle at the Somme and was shot in the leg by a German machine gun. His leg was then amputated. Sixteen-year-old Private Thomas Bull, of the 8th Royal Welsh Fusiliers, lost his life 12 hours before the final evacuation of the Gallipoli Peninsula in January 1916. He was aged 16

The youngest soldier to serve overseas was 13-year-old Private Sidney Lewis, of 106 Company, Machine Gun Corps, who saw action at the Somme.

Because of his age, his family later did not believe his story that he had served until his medals were found after his death in 1969.

Second Lieutenant Reginald Battersby led his platoon, the 11th East Regiment, into battle at the Somme and was shot in the leg by a German machine gun. His leg was then amputated.

Private Frank Lindley enlisted aged 14 to avenge the death of his older brother. 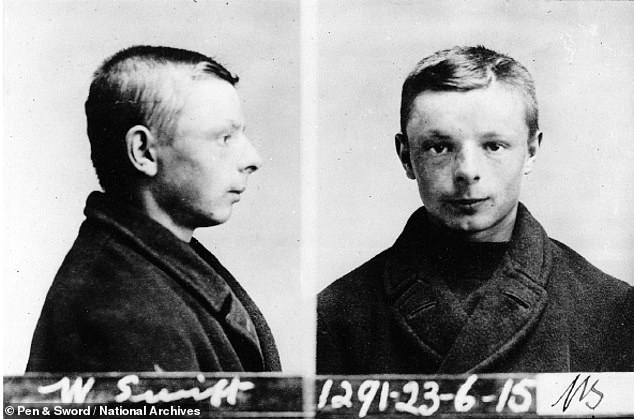 William Swift was sentenced to three years in youth detention for theft before being released on license into the army.  He was sent to France underage and was killed in action in 1917 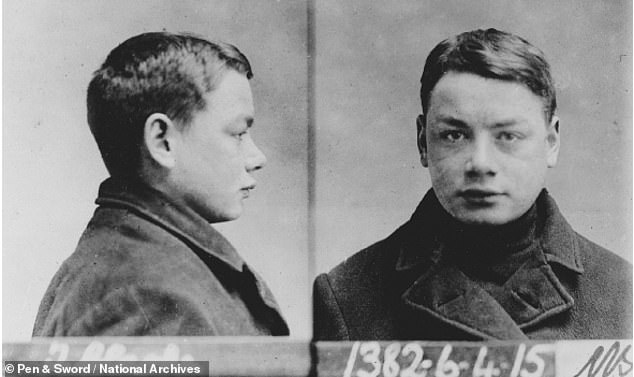 Thomas Clarke was another young offender who was later allowed to join the army. He was sent to France aged 18 and deserted before being captured, court-martialled and sentenced to death. However he was reprieved and was killed in action on the Somme in November 1916 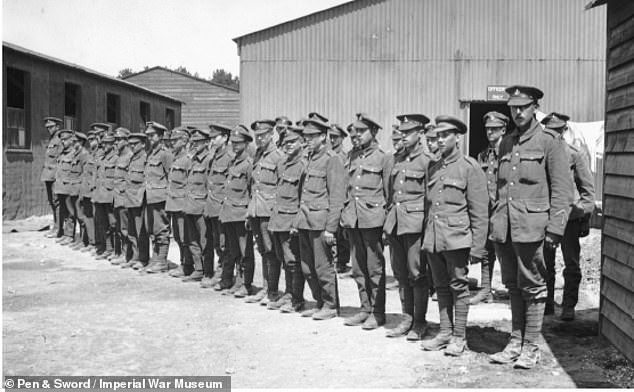 These young soldiers are seen with their older counterparts at Étaples camp, northern France, in July 1918 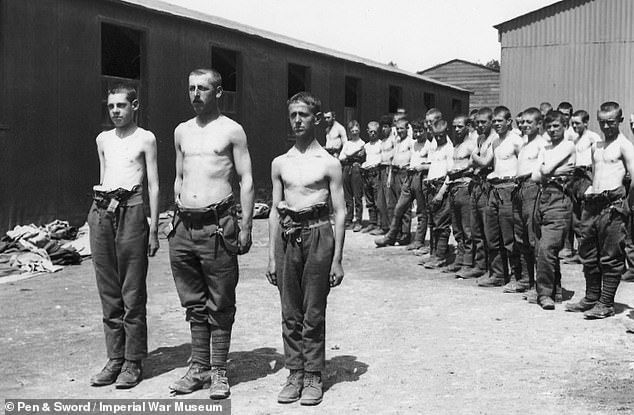 A second image shows the young men with their uniforms removed. It is evident how they were still physically immature compared to one older man (pictured centre)

On July 1, 1916 he went over the top on the Somme and saw his battalion cut down. He was wounded in the leg by shrapnel as he took shelter in a shell hole.

Images of him taken at the start of his service in 1916 and the end of the conflict show he aged dramatically, with the strain of battle etched on his face.

At the outbreak of war, boys falsified their ages to volunteer at recruiting offices. 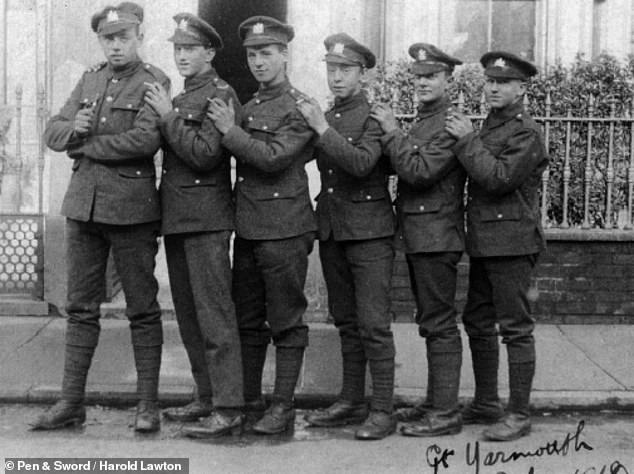 Great Yarmouth, February 1918. At eighteen, Harold Lawton (far left) and his friends were sent to France. Lawton was captured just seven weeks after the image was taken. However, he survived the war and, when he died aged 106, he was the last surviving PoW of the Great War 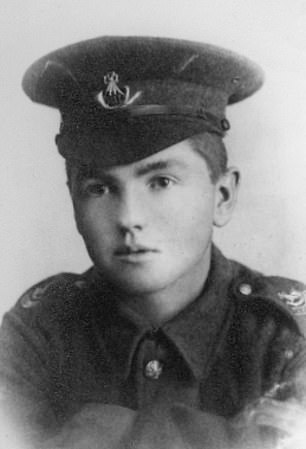 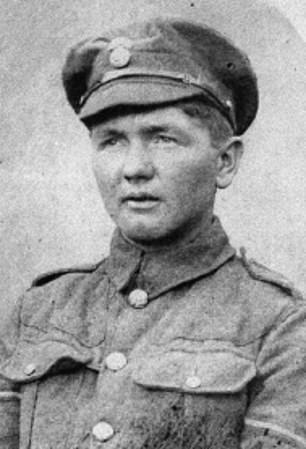 Private Walter Williams enlisted in the 8th Northumberland Fusiliers aged sixteen. He served on the Somme in 1916 at seventeen and was wounded in September 1918. He is pictured left shortly after joining up, and right after just two years of service at the front. The strain of war is evident

Even though it was often apparent that they were underage and physically immature, they were still accepted by the British Army who needed more boots on the ground as casualty numbers soared.

Had they been withdrawn on mass for being underage, it likely would have lost Britain the war.

Private Leonard Cooper, of the South Staffordshire Regiment, who enlisted aged 15, was visited by King George V in hospital after he was wounded in battle. 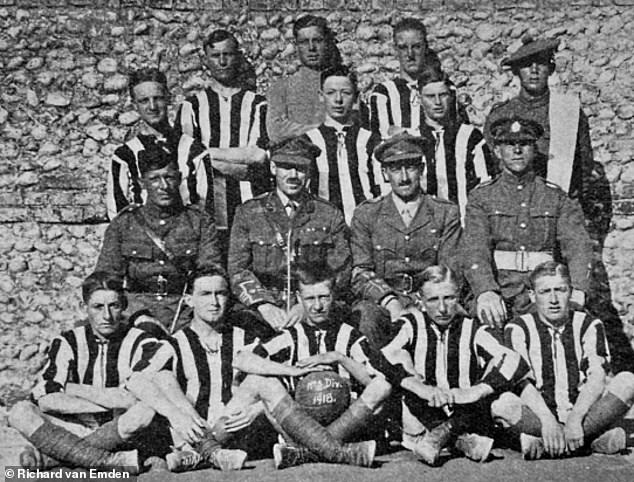 Major Hugh Cardinal-Harford (middle left) with some of the young soldiers at Étaples. He had been badly wounded in the Boer War. He had fought in the trenches but was then ordered to look after 1,000 boys who had been removed from the line in 1917 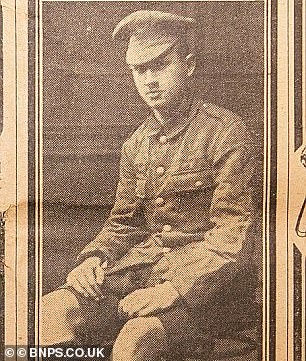 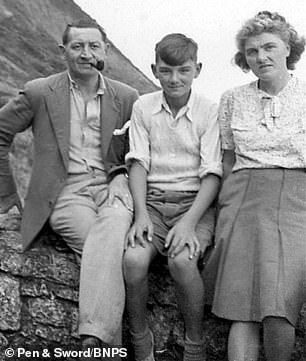 The youngest soldier to serve overseas was 13-year-old Private Sidney Lewis (pictured left in contemporary press coverage and right in the 1950s with his son Colin and wife), of 106 Company, Machine Gun Corps, who saw action at the Somme. Because of his age, his family later did not believe his story that he had served until his medals were found after his death in 1969

When the King asked the baby-faced Tommy ‘how old are you?’, Private Cooper responded ’19, your majesty’.

To this, the King said, with a twinkle in his eyes: ‘But that is your military age.’

Many underage soldiers distinguished themselves in battle, including Private Jack Pouchot, who won the Distinguished Conduct Medal aged 15.

Private George Lewis, of the Cheshire Regiment, received the same accolade aged 16 after helping the wounded in No Man’s Land in 1915.

The first Pals batallion was raised from the stockbrokers of the City of London in August 1914. After only a few days of the start of the recruitment, around 1,600 men had joined what became the 10th Battalion, Royal Fusiliers.

The phrase ‘battalion of pals’ was first coined by Lord Derby, who recruited enough men to form the battalions which made up the King’s (Liverpool) Regiment in only a week.

The battalions also became synonymous with other towns and cities in Britain, including Cambridge, Cardiff, Manchester, Leeds, Newcastle and Glasgow. 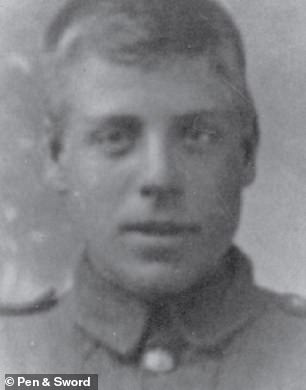 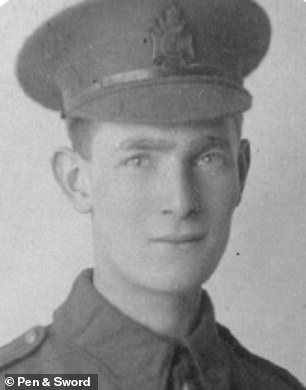 Private James Walters (left) had previously served at Gallipoli and died on the Somme aged 16. His mother had already begun the process of applying for her son to be discharged when he was killed. Ernest Steele, 17, is pictured right shortly after enlisting into the Queen’s Westminster Rifles in 1914. He was killed during fighting in September 2018

Many Pals battalions did not see major action until the first day of the Battle of the Somme in 1916.

Many of the units sustained heavy casualties, meaning that many communities lost nearly all of their younger male residents.

Mr Van Emden, in the book’s introduction, writes: ‘However passionately I feel about the boy soldiers in the Great War, this book has no hidden agenda. 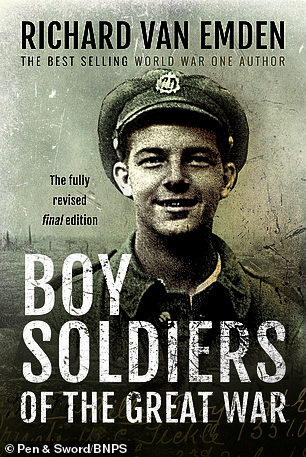 Boy Soldiers of the Great War, by Richard Van Emden

‘Such an emotive story does not necessitate an attack either on the political elite of the time, who might have turned a blind eye to underage enlistment, or on the military or civil officers who frequently overlooked a boy’s palpable youth so that he could fight.

‘The connivance needed to enlist the number of underage soldiers who fought was required at all levels, including the boys’ own parents and, not least, the lads themselves, who were willing to go.

‘This book… is the boys’ own stories, told in their own words, about what inspired them to enlist and what made them continue to serve when the full horror of warfare became apparent.’

Boy Soldiers of the Great War 2021 Hardback Edition, by Richard Van Emden, is published by Pen & Sword and costs £25.