Cabinet minister Nadine Dorries was today questioned whether the BBC will still exist in a decade – as she accused the broadcaster of nepotism and elitism.

The Culture Secretary demanded change at the organisation, saying its staff needed to reflect a wider demographic than just people  ‘whose mum and dads work there’.

Speaking at a Conservative Party fringe event, the Liverpudlian said its ‘groupthink mentality’ excluded minorities and people with regional accents.

Asked whether the licence fee would still be compulsory in 10 or 20 years, she said: ‘I can’t look into the future. Will the BBC still be here in 10 years? I don’t know. 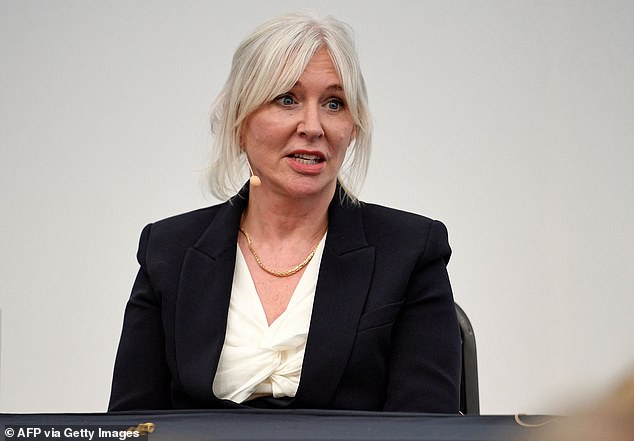 The Culture Secretary demanded change at the organisation, saying it’s staff needed to reflect a wider demographic than just people ‘whose mum and dads work there’.

‘We can’t look into the future. It is a very competitive environment at the moment.

Bias at the BBC

The BBC has repeatedly been accused of bias by critics

In July, it emerged that the corporation had received a record 500,000 complaints from viewers in a year amid concerns over the broadcaster’s ‘perceived bias’.

The figures were revealed in the BBC’s annual report, which acknowledged that ‘too many people perceive the BBC to be shaped by a particular perspective’.

The list of complaints was topped by Emily Maitlis with her monologue on Newsnight about Dominic Cummings in May 2020.

Ms Maitlis, during a discussion about Mr Cummings’ journey from London to Durham during the first national lockdown, claimed Boris Johnson’s former adviser ‘broke the rules’ adding: ‘The country can see that, and it’s shocked the Government cannot.’

Her speech later prompted 23,674 complaints and broadcasting watchdog Ofcom warned the BBC that hosts must not ‘inadvertently give the impression of setting out personal opinions’

BBC Breakfast presenter Naga Munchetty, alongside co-host and Charlie Stayt, also attracted 6,498 complaints after the pair appeared to mock Housing Secretary Robert Jenrick over the size of the Union flag in his office.

Ms Munchetty was later forced to apologise after liking social media posts in support of the on-air comments.

‘You have got Amazon Prime, Netflix and other bods coming down the line.

‘This younger generation that are coming through, they certainly watch their television in a very different way to how my generation watched its TV, so who knows where we will be?’

Ms Dorries, 64 , also admitted she would pay the licence fee if it became a voluntary payment – but only to watch Strictly Come Dancing.

She insisted she did not want a ‘war’ with the broadcaster but suggested it would have to set out how it will change before the next licence fee settlement, which covers the five years from April 2022.

Ms Dorries, who went from a working-class background in Liverpool to become a bestselling author and Cabinet minister, hit out at the lack of opportunities in the arts and sports for children with similar upbringings.

At an event hosted by the Telegraph’s Chopper’s Politics podcast, Ms Dorries, who has only been in her role since September’s reshuffle, said she had ‘an interesting meeting’ with BBC director-general Tim Davie and chairman Richard Sharp.

‘The perspective of the BBC is that they will get a settlement fee and then we will talk about how they are going to change,’ the Culture Secretary said.

‘My perspective is ‘tell me how you are going to change and then you get the settlement fee’.

Ms Dorries highlighted a series of issues she had with the broadcaster, including a lack of working-class diversity and perceived political bias.

‘It’s about recognising that access and lack of impartiality are part of your problem,’ she said.

She said there was a ‘groupthink’ at the corporation which ‘excludes working-class backgrounds’.

‘North West, North East, Yorkshire – if you have got a regional accent in the BBC it doesn’t go down particularly well,’ she said.

‘They talk about lots to do with diversity but they don’t talk about kids from working-class backgrounds and that’s got to change.’

Asked how to address that, she said: ‘It’s not about quotas, it’s just about having a more fair approach and a less elitist and a less snobbish approach as to who works for you.’ 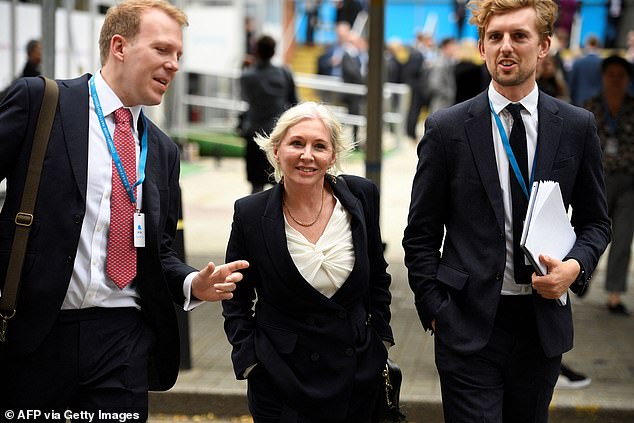 Speaking at a Conservative Party fringe event the Liverpudlian said its ‘groupthink mentality’ excluded minorities and people with regional accents. 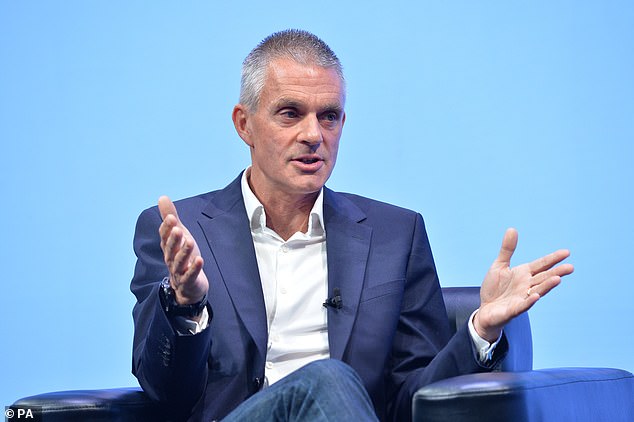 At an event hosted by the Telegraph’s Chopper’s Politics podcast, Ms Dorries, who has only been in her role since September’s reshuffle, said she had ‘an interesting meeting’ with BBC director-general Tim Davie (pictured) and chairman Richard Sharp

Ms Dorries told the event the path from a poor background to the top of a career in the arts or media had ‘completely disappeared’.

‘People from my background wrote books, wrote theatre plays and did really well.

She added: ‘Levelling up isn’t about regional growth figures, it’s not about connectivity, it’s about none of that, it’s about people.

‘I want to go back to those kids and find them a pathway into the industry.’