A New Yorker has horrified TikTok with her view of the mountainous piles of trash bags stacked outside the only window in her $1,575-per-month apartment, revealing it’s only completely clear once a week.

Carol, who is known as @notfromdenmark on TikTok, went viral when she gave a tour of her cozy kitchen nook inside her Manhattan studio — and then panned the camera to the trash-filled courtyard she has to look at almost every day.

‘If you’re looking for a sign to move to New York City, this is it,’ she captioned the video, which has been viewed a whopping 10.2 million times. 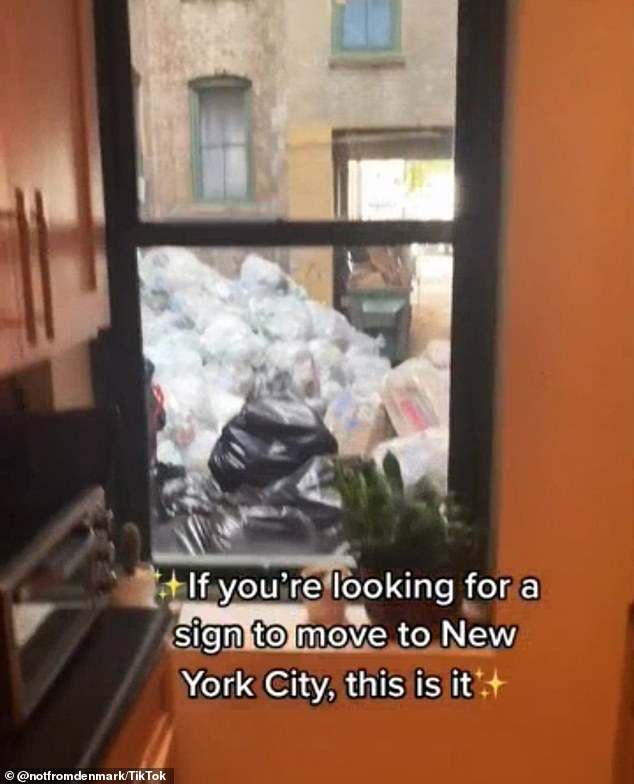 Room with a view: Carol, who is known as @notfromdenmark on TikTok, first went viral when she shared a video of the trash-filled courtyard outside her apartment in Manhattan 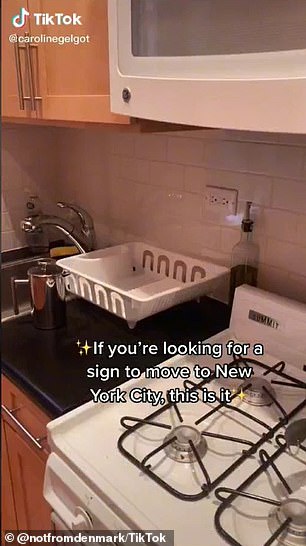 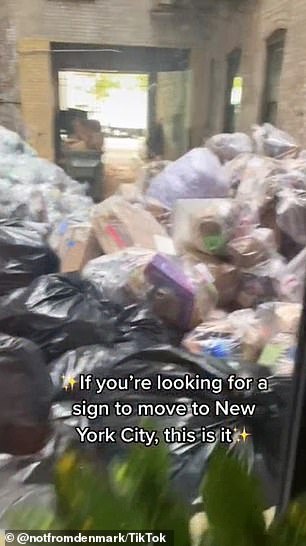 Plot twist: She started the TikTok with a tour of her cozy kitchen nook inside her studio, and then panned the camera to the piles of garbage that she has to look at almost every day

When she posted the footage, she jokingly added: ‘Stop dreaming, start doing.’

Nearly 20,000 people have commented on the video, and a number of them were outraged by Carol’s living situation and the possible vermin running around in the pile.

‘This can’t be legal,’ one TikToker wrote, while another added: ‘There’s absolutely no way you don’t have roaches with all that garbage directly up against your wall/window.’

Others couldn’t resist cracking some jokes, with one person noting: ‘At least you can take the trash out real quick. Just toss it out the window.’

There were even a few New Yorkers who were envious of her apartment. 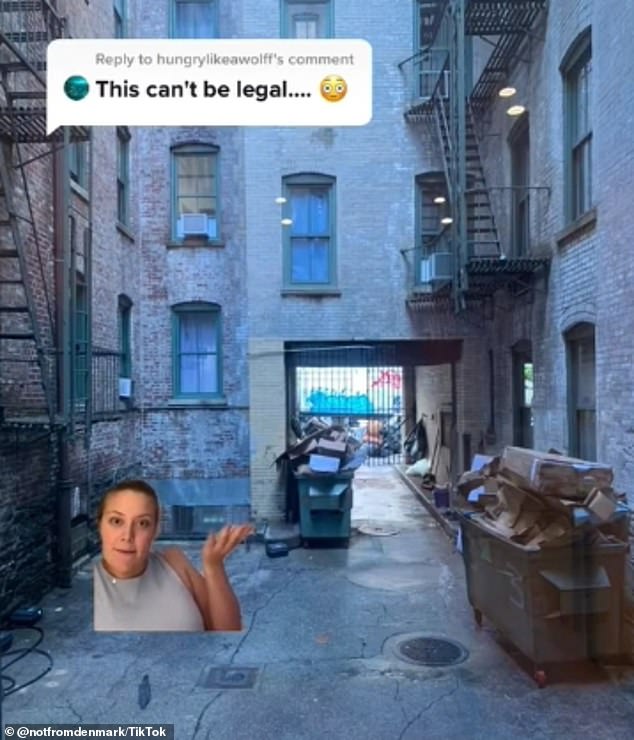 Backstory: Carol filmed a number of follow-up videos about the trash pile, explaining that the courtyard was empty when she toured the apartment in August 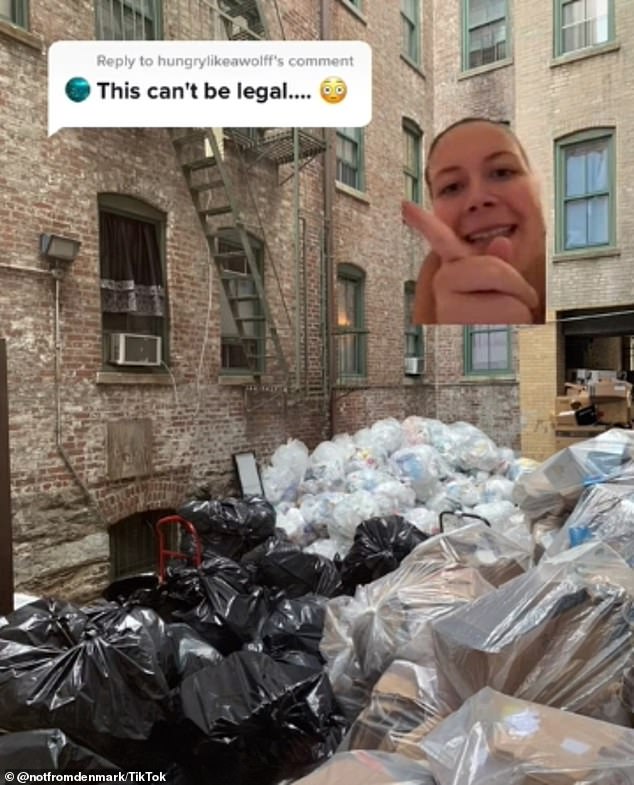 Now that’s a surprise: After moving in and being greeted with garbage stacked outside of her only window, she realized it was trash day when she saw the apartment

‘I still looked at this video and thought “omg she has so much more counters space,”‘ someone hilariously admitted.

Carol received plenty of questions, which she addressed in a number of follow-up videos about her apartment.

She shared that she pays a discounted $1,575 per month for her studio because of COVID-19 pricing. When the rent goes back up to $1,890 per month after her 12-month lease ends, she plans on moving out.

The TikToker insisted it was actually the nicest, most spacious place she toured while apartment hunting in Manhattan over the summer.

‘Plus, they didn’t charge me extra for the view,’ she joked. 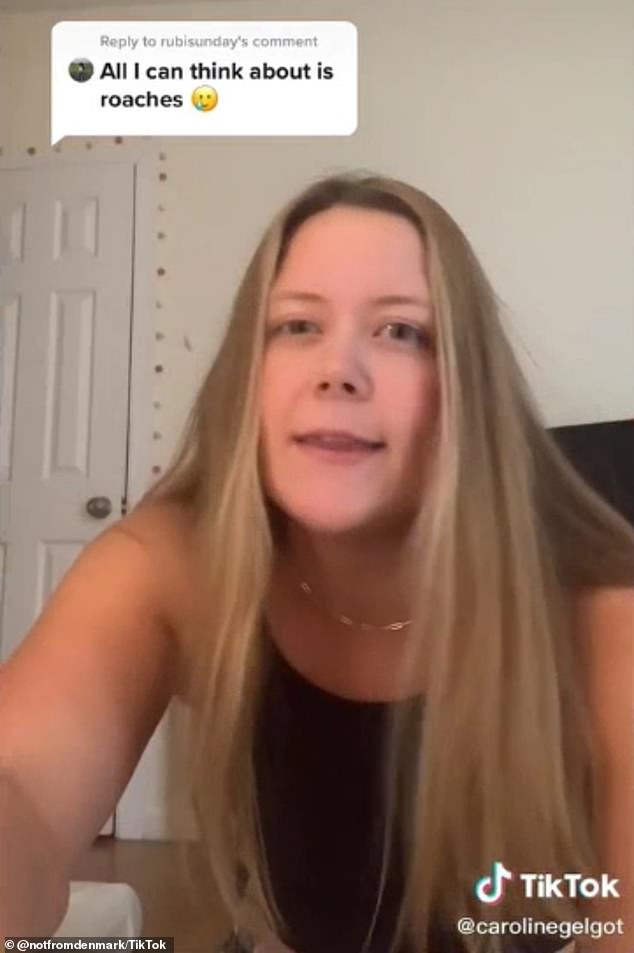 All clean! Carol insisted no one warned her that the trash was stored in the courtyard, but she has yet to see any vermin inside her apartment, so far 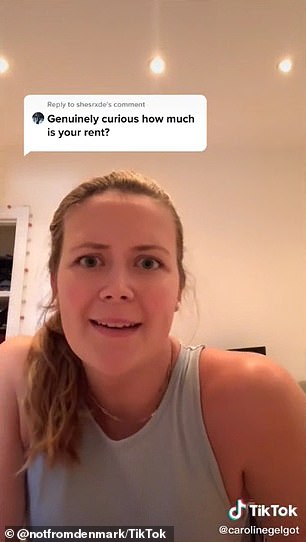 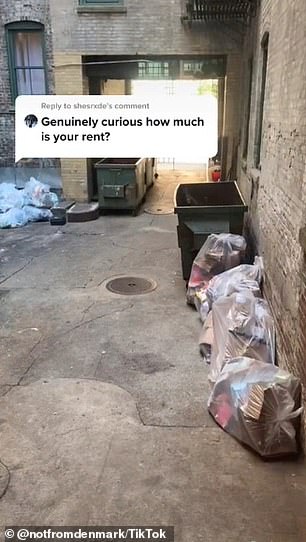 Steal? Carol pays a discounted $1,575 per month for her studio because of COVID-19 pricing, but she plans to move out after her lease is up and the payments go back up to $1,890

Carol also claimed she has never seen any roaches, rats, or mice in her apartment, which she knows is hard to believe.

‘I would not believe this if I had only seen that original video, but I have never once since I’ve moved in September seen a cockroach outside or in this apartment,’ she said. ‘I think something must be sealed off pretty well. I have no idea. I have seen really small mice, like one or two of them running around out there. Again, nothing in my apartment.’

While she has seen some flies hovering over the trash, her biggest concern is how she would exit her apartment building if there was ever a fire.

‘This is the view that I saw outside of the window when I toured the apartment back in August,’ she said of her snapshot of the empty courtyard. ‘I toured it on a Monday night. Monday is the day that they take the trash out here, apparently.’ 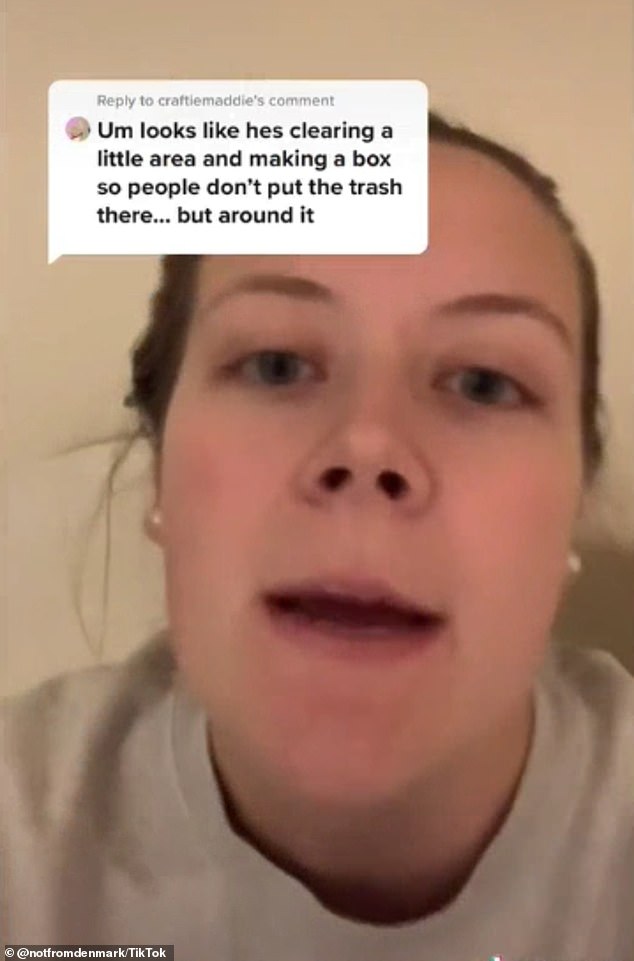 Process: Earlier this month, she revealed she called the fire marshal because the trash was blocking the fire escapes, but nothing has come of it as of yet 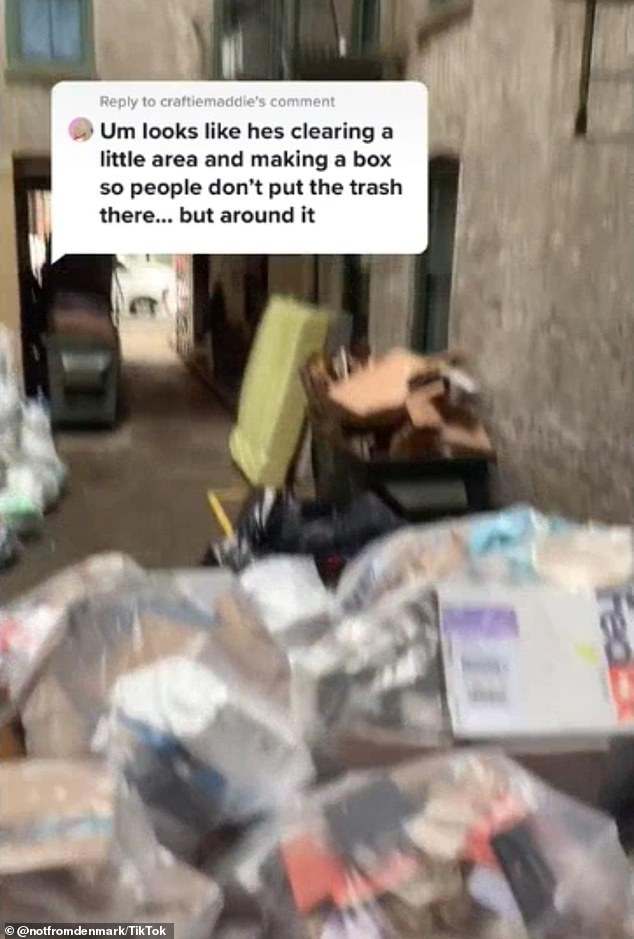 Insult to injury: Not only are the squares being covered with trash bags, but the garbage is now pushed even closer to her kitchen window

She alleged that no one ever alerted her to the fact that the building stores its trash in the area while sharing a snapshot of the garbage piles she sees most days.

‘This is what I was greeted with when I moved in September,’ she said. ‘At no point in the entire process did they mention this is where they store the garbage. It wasn’t in the lease. They didn’t mention it when I toured. Never.’

Carol explained that she emailed the building’s managers about the garbage the first week she moved in, but nothing has been done about it as of yet.

‘First of all, it’s gross. I don’t want that there. That’s, like, embarrassing — even though I’m sharing this on TikTok right now,’ she said. ‘Then also, please notice, this is my fire escape. I don’t have another window to like a street or anything. This is how I’d escape in a fire.’

She also noted the trash would likely catch on fire if there was ever a blaze.

‘If there’s a fire, all these people are literally just going up in flames with all the cardboard and trash in here,’ she said. ‘So I don’t think it’s legal.’ 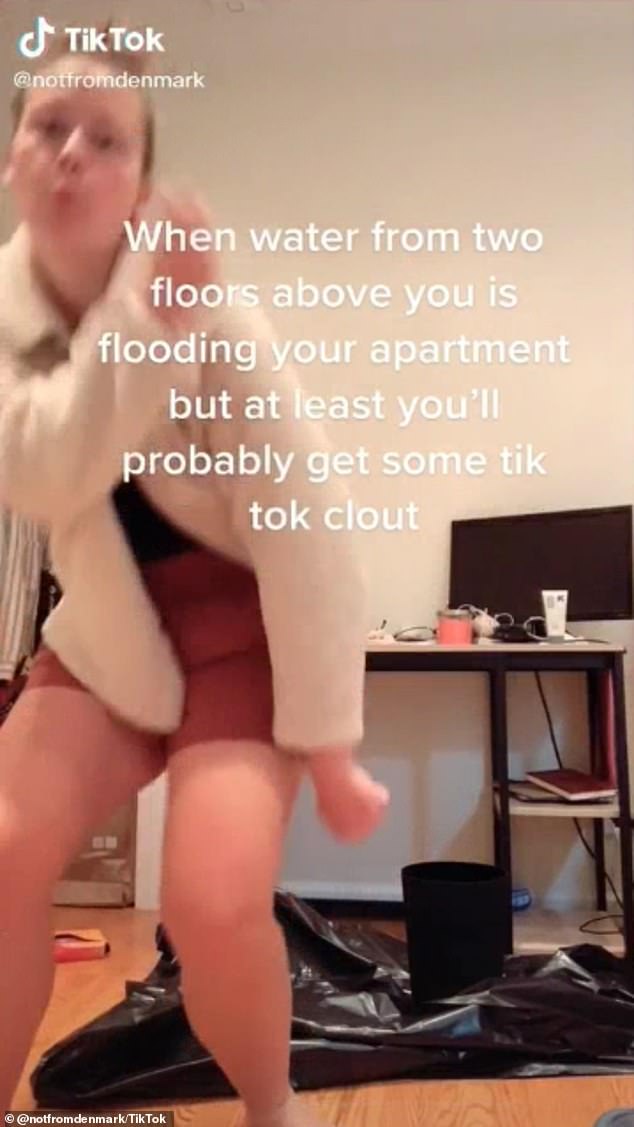 Oh no: Carol revealed her apartment flooded this week while sharing a video of herself dancing in front of a tarp and bucket in her living room 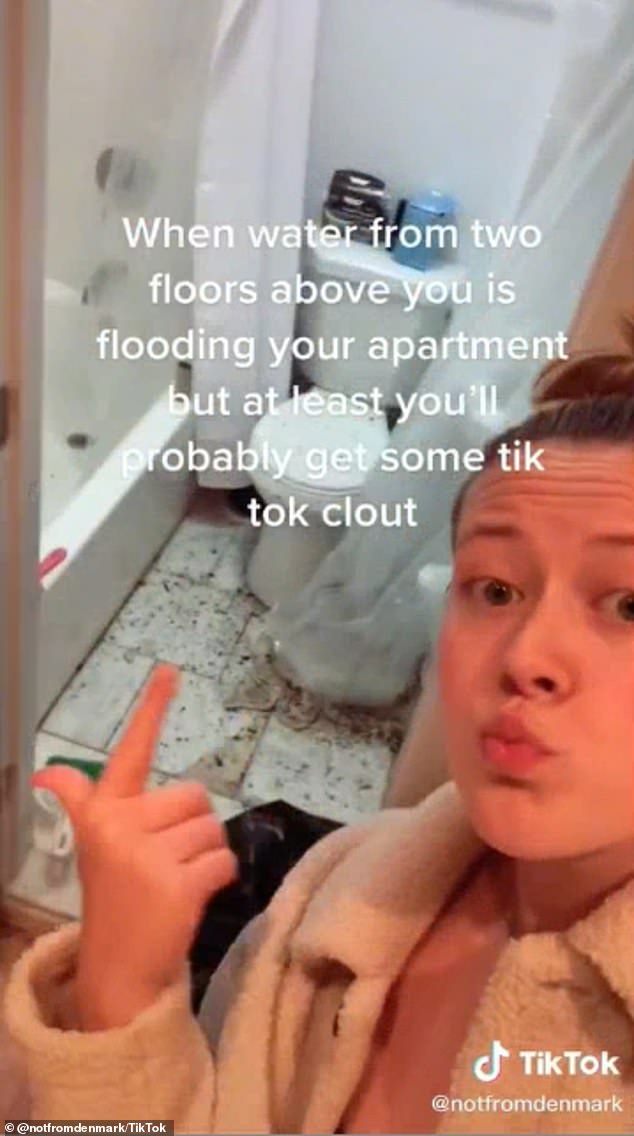 Issues: ‘When water from two floors above you is flooding your apartment, but at least you’ll probably get some TikTok clout,’ she captioned the clip

Carol has continued to share updates, revealing that after her videos went viral the building painted yellow squares at the bottom of each of the three fire escapes to block off the areas.

However, the squares are now being covered with trash bags, and to make matters worse, the garbage is now pushed even closer to her kitchen window.

‘Update on my apartment’s trash: There is none,’ she shared earlier this month. ‘I called the fire marshal after one of my last videos and then they said they would send someone out in the next three days.’

‘I got a letter saying that they resolved it because, I guess, the trash was taken out before they came, so there wasn’t anything blocking the fire escape,’ she added. ‘So, I should probably call them again. I dunno, I’m just busy.’

Carol is now dealing with an issue inside her place that is unrelated to the trash. She shared a video of herself dancing in front of a tarp and bucket in her living room earlier this week.

‘When water from two floors above you is flooding your apartment, but at least you’ll probably get some TikTok clout,’ she captioned the footage.