Nicola Sturgeon stepped up her drive to split the UK today as she struck a deal to govern with the Scottish Greens – giving the party its first taste of power.

At a press conference alongside her allies, the SNP leader said another independence referendum should be held in the first half of this parliament – by 2024 – as long as coronavirus has passed.

She insisted the pact should make it ‘impossible’ for Boris Johnson to refuse permission for the vote.

Two Green MSPs will become Scottish Government ministers under the confidence and supply agreement, the first time the party has held such positions in the UK.

It cements the pro-independence majority at Holyrood, as the separatists and unionists line up for another battle for the soul of the country. 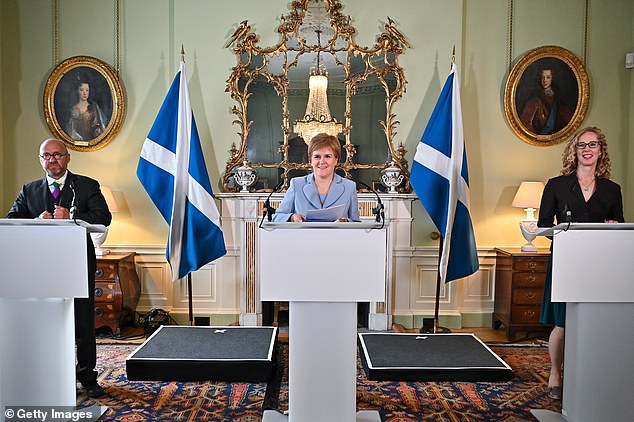 At a press conference alongside the co-leaders of her Green allies, Nicola Sturgeon said another independence referendum should be held in the first half of this parliament – by 2024 – as long as coronavirus has passed

Under the terms of the deal, Green MSPs would support the Scottish Government on confidence votes, as well as in annual budgets if there is ‘appropriate funding for the shared policy programme’.

However, a number of areas are excluded from the agreement, including much of aviation policy, the future of green ports, and direct financial support to businesses involved in the aerospace, defence and security sectors, field sports and the economic principles related to concepts of sustainable growth and inclusive growth.

Both sides hailed the deal, which is yet to be approved by Scottish Green Party members, as a ‘historic moment’.

Speaking at her official residence at Bute House in Edinburgh, First Minister Nicola Sturgeon said: ‘The publication of this agreement today undoubtedly marks a historic moment.

‘It recognises that business as usual is not good enough in the times we are living through.

‘It grasps that out of great challenge, a better world and a better Scotland is capable of being born, but it understands that achieving it will take boldness, courage and a will to do things differently.’

She said the parties will work together to build a ‘greener, fairer, independent Scotland’, but stressed it is ‘not a coalition’ and while they do not agree on everything they are focusing on areas of agreement.

Ms Sturgeon said the agreement makes it ‘impossible’ for the UK Government to withhold the powers for a second Scottish independence referendum as it intends.

‘This deal would see Greens entering government for the first ever time in Scotland, or anywhere in the UK.

‘And it couldn’t come at a more important time.

‘The last 18 months have been an incredibly difficult time for us all and as we seek to rebuild our lives and our economy we really must seek to do things differently.’

The Scottish Cabinet approved the powersharing deal on Friday morning. 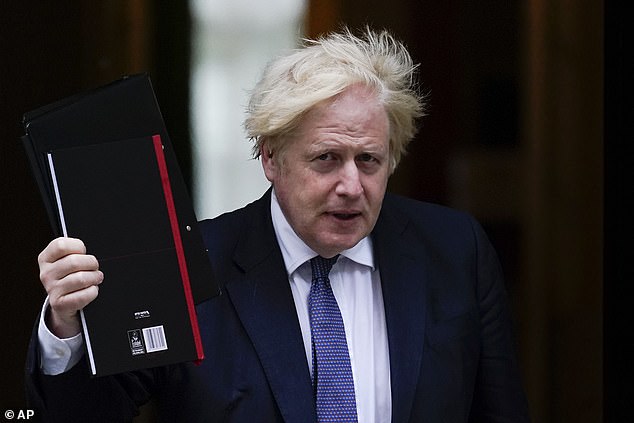 The two parties have been locked in negotiations since May, after the SNP fell one seat short of an overall majority at the Holyrood election.

The agreement stops short of a formal coalition between the two but they pledge to work together on key issues, including on a Scottish independence referendum after the coronavirus pandemic.

The Scottish Conservatives and Labour have raised concerns about a deal.

Scottish Tory net-zero spokesman Liam Kerr said the Green manifesto from May’s election was a ‘doctrine to start a war on working Scotland’, after it proposed a move away from North Sea oil and gas, and the end of new road-building projects.

He said: ‘If the Greens are to be anything more than simply the SNP’s lackeys, they need to rediscover their principles and fight for a greener Scotland rather than roll over to the SNP every time the going gets tough.’