The number of European Union citizens in Britain could be 400,000 higher than the Office for National Statistics figure, an Oxford University researcher claimed today as he slammed the ‘lack of quality’ in official migration data.

The study’s findings will lead to questions over whether the population of the UK could also be 400,000 more than the official Government estimate of 66,796,807 in mid-2019, equivalent to a city roughly the size of Coventry.

Leading demographer Francesco Rampazzo said the research was important because the pandemic had shown how vital it was to know the total UK population for giving reliable estimates of vaccinated people.

His study questions the Government’s methods of recording EU migration and compares their estimates to the total suggested by his analsyis of Facebook‘s advertising platform, the Labour Force Survey and country-specific information on unemployment and economic output.

ONS figures found there were an estimated 3.6million European migrants in the UK in 2019, but the new research suggests the real figure was more likely to be around 4million, which is 11 per cent higher. He said the biggest possible difference is 20 per cent, which would give a total of 4.3million, but 4million was the more likely estimate.

The study, which also involved a team from the University of Southampton and was published in the journal Demography, added that in 2018 there were likely to have been 25 per cent more than ONS figures suggested.

The ONS told MailOnline that its ‘best estimates’ show that in mid-2020 there were around 3.5million EU citizens living in the UK, but it will be updating this data as more information becomes available from Census 2021. 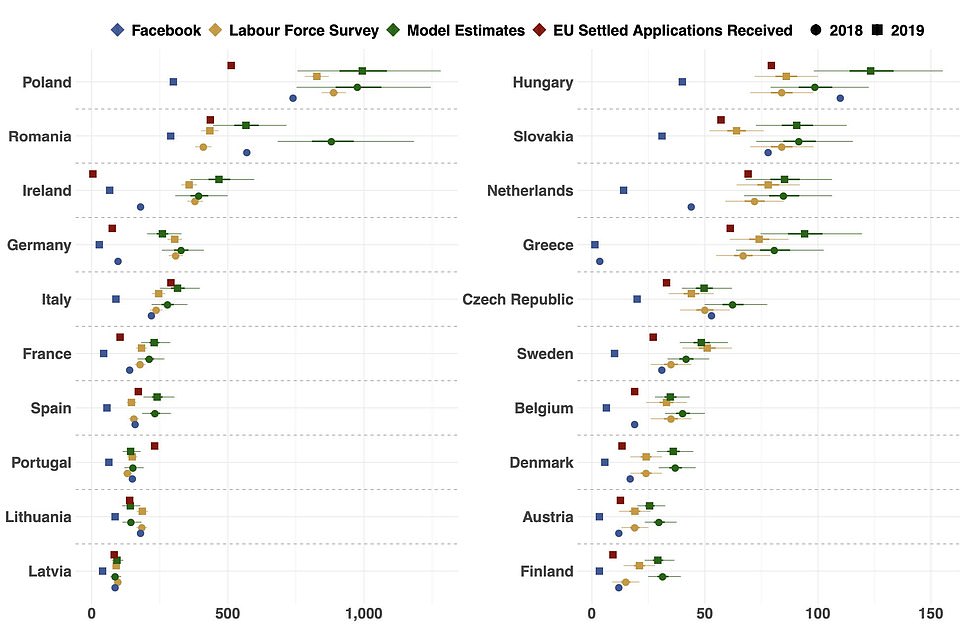 The study estimated the total number of European migrants in the UK (numbers in thousands). The researchers said the aim was to explain the scale of the undercount of the official data, relative to the estimates produced by the model for 2018 and 2019. The Facebook advertising data is in blue, the Labour Force Survey data is in yellow, the settled status application data is in red, and the model estimates are in green. The graphic shows that the model estimates are higher than the  official LFS estimates

Speaking about his research, Mr Rampazzo said: ‘In 2019, on ONS figures there were an estimated 3.6million European migrants in the UK. But this research suggests the real figure was more likely to be around 4million.

He added: ‘Knowing the number of migrants in a region is important for planning….for example for schools and transport. The Covid-19 pandemic has demonstrated the importance of knowing the number of residents in the UK for producing reliable estimates of vaccinated people.

Mr Rampazzo and the team used statistics from Facebook’s advertising platform which the firm uses to give companies information on the age, sex, language, and real time location data of users.

This technology can tell where users are accessing the platform, the country they came from, and defines a migrant as a person that used to live in one country and now lives in another country.

Facebook, which he noted in his study had been described as a ‘biased digital census’, makes data available to advertisers to help them plan online campaigns.

He said it therefore has a ‘strong incentive to accurately report the characteristics of its users’ because advertisers ‘might change platforms if they cannot target the right audiences’ through Facebook. 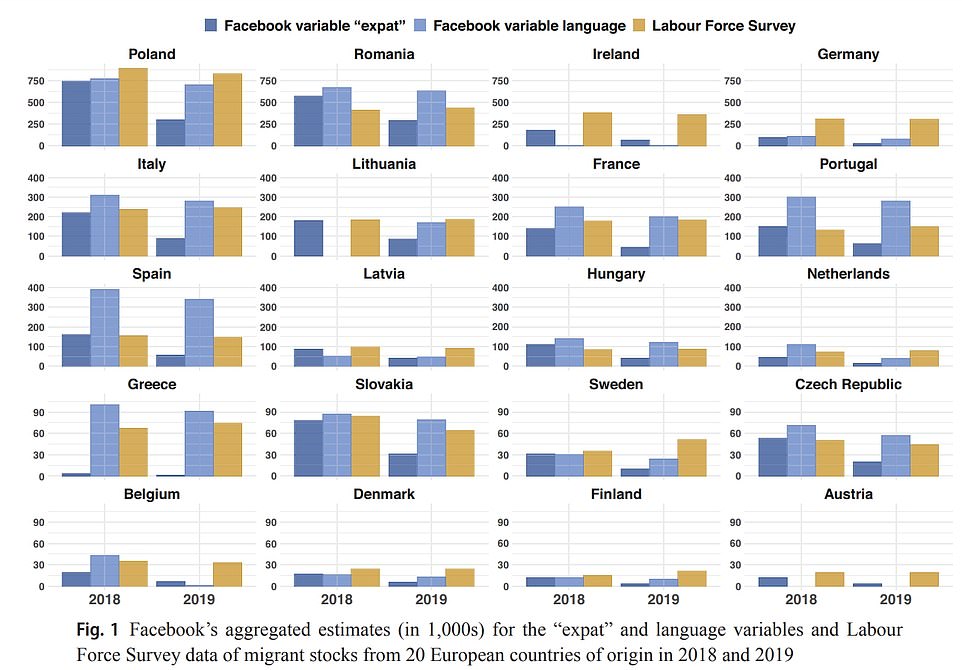 This graphic shows variables from three of the researchers’ data sources in thousands. These are the migrant variable and language variable from Facebook’s advertising platform, and estimates of migrant stocks by country of birth from the Labour Force Survey. There is a clear correlation between the Facebook migrant and language variables for many countries

The researcher also said the ONS was aware of an undercount of 16 per cent for net migration to the UK from eight EU countries in 2016.

And he told how the UK has been using a survey-based system to collect migration information, relying heavily on the International Passenger Survey (IPS), which was created 60 years ago and which the ONS itself admitted in August last year ‘has been stretched beyond its original purpose’.

However the ONS pointed out to MailOnline that it no longer uses the IPS and is instead now taking a new approach based upon administrative data, which looks at the observed length of activities within these sets of data to estimate migration.

The team also looked at the Labour Force Survey which measures the inflows and outflows of migrants and collects data every three months, but they noted that migrants tended to come and go before the pandemic.

An ONS spokesman told MailOnline: ‘Our best estimates show that in mid-2020 there were around 3.5 million EU citizens living in the UK.

‘We will be updating our estimates to provide the best picture of the population as more information becomes available, in particular the results from Census 2021, which will give further insight when published next year.

‘Our migration and population statistics are currently undergoing a period of development. For instance, we no longer use the International Passenger Survey to measure migration – the flow of people in and out of the UK.

‘It is important to reiterate that this new data source is still a work in progress and should not be used as official migration statistics at this time.’ 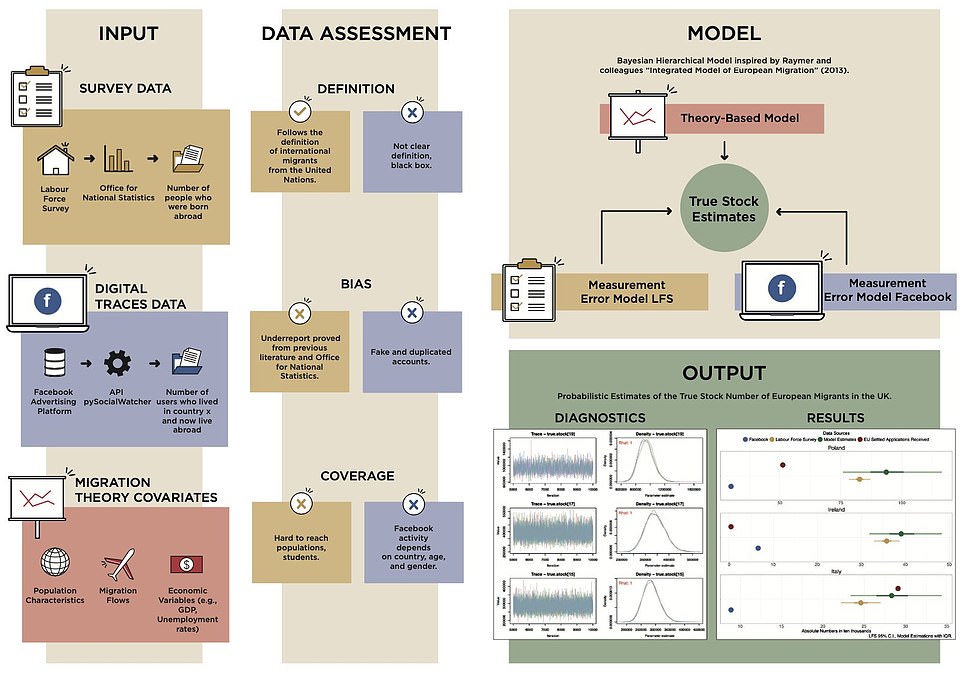 Mr Rampazzo shared this graphic, showing how his research team had repurposed the ‘Integrated Model of European Migration’ theorised at the UK-based Centre for Population Change to combine traditional data and digital traces

Mr Rampazzo said: ‘We looked at unemployment and GDP figures for each country to better understand the push and pull factors of migration. Why migrants might move away from their home country or return to it.

‘It is important to use a combination of different data sources and not rely on similar types.

‘The hope is that this research contributes to a learning process and demonstrates a way to produce and more accurate understanding on the complex issue of international migration.’

The researchers said that as for other EU countries, Malta and Luxembourg were excluded because of their small size, and Bulgaria and Croatia were left out because Facebook does not provide estimates on expats for them. 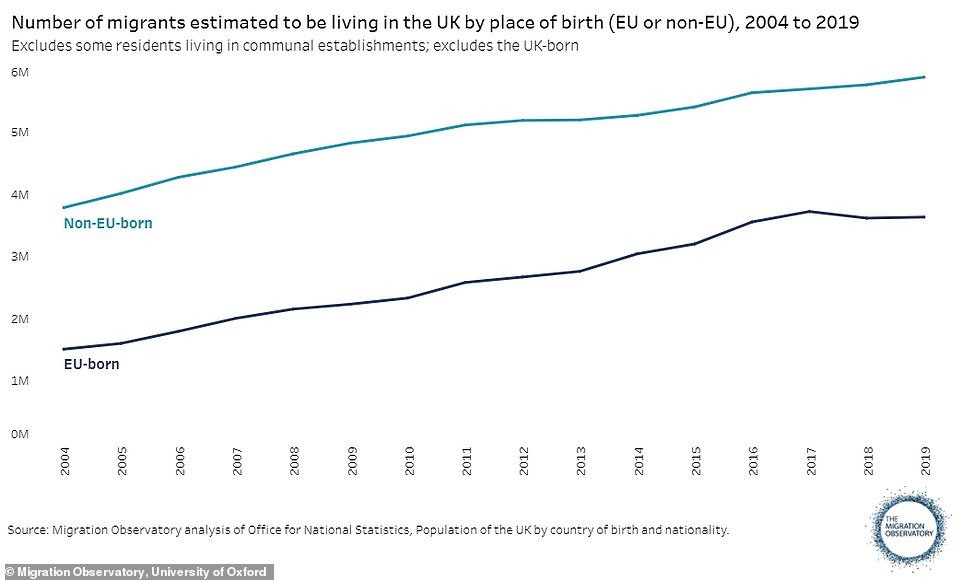 Estonia and Slovenia were excluded because of missing values in the data, while Cyprus was left out because the Facebook ‘expat’ estimates might include all the users living there. Facebook has been contacted for comment.

They also worked alongside the University of Trento in Italy, the Qatar Computing Research Institute in Doha and the Max Planck Institute for Demographic Research in Rostock, Germany.

The research was released following another war of words erupting over the Channel crisis last week after a record 853 migrants reached Britain in a single day.

Home Office insiders claimed their French counterparts ‘don’t give a s***’ about the growing death toll after seven migrants were feared to have lost their lives in just ten days. 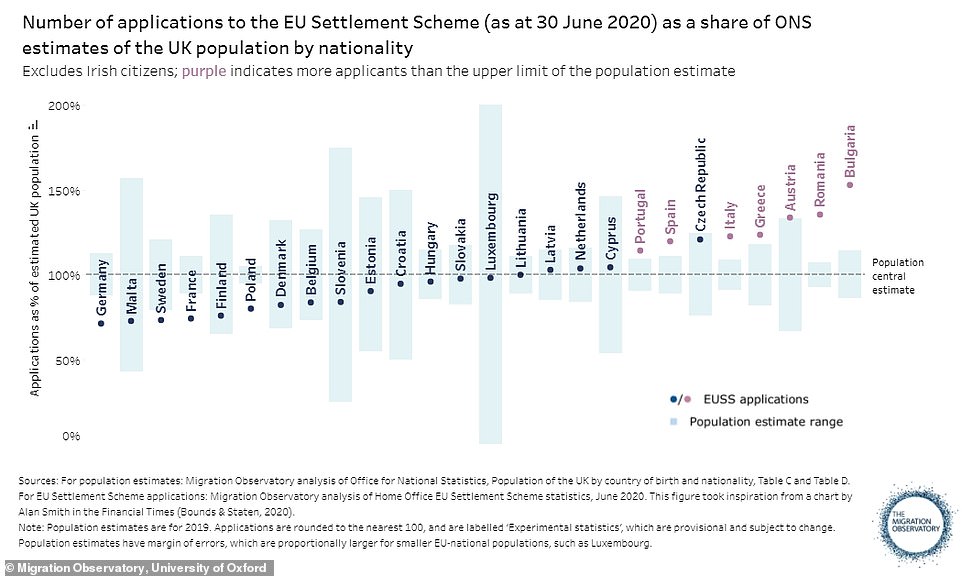 This graph from the Migration Observatory shows the number of applications to the EU Settlement Scheme as at June 30, 2020 – presented as a share of ONS estimates of the UK population by nationality. It excludes Irish citizens living in the UK

And for the first time, they voiced escalating concerns about France’s ineffective use of £54million of British taxpayers’ money intended to stop the flow of migrants.

The French have deployed only 220 gendarme reservists with the British cash so far – described as ‘woefully inadequate’ by a senior Home Office source.

British insiders also pointed the finger at French President Emmanuel Macron for concentrating on the fishing permit dispute rather than the humanitarian crisis in the Channel.

A staggering 853 migrants reached UK shores on Wednesday of last week aboard 25 small boats, beating the previous daily record of 828 set on August 21.

The total to have made it to Britain since the start of the year now stands at 21,586, compared with 8,410 last year.