Cristiano Ronaldo carefully placed the ball on the spot for the second time and closed his eyes.

Hugo Lloris bounced on his goal line, flapping his arms while, behind his net, France fans hurled various objects from the stands in an attempt to distract the penalty taker.

Ronaldo composed himself, opened his eyes, darted forward and fired the ball past Lloris before sprinting away to perform a celebratory twirl as more plastic bottles rained down in his direction. 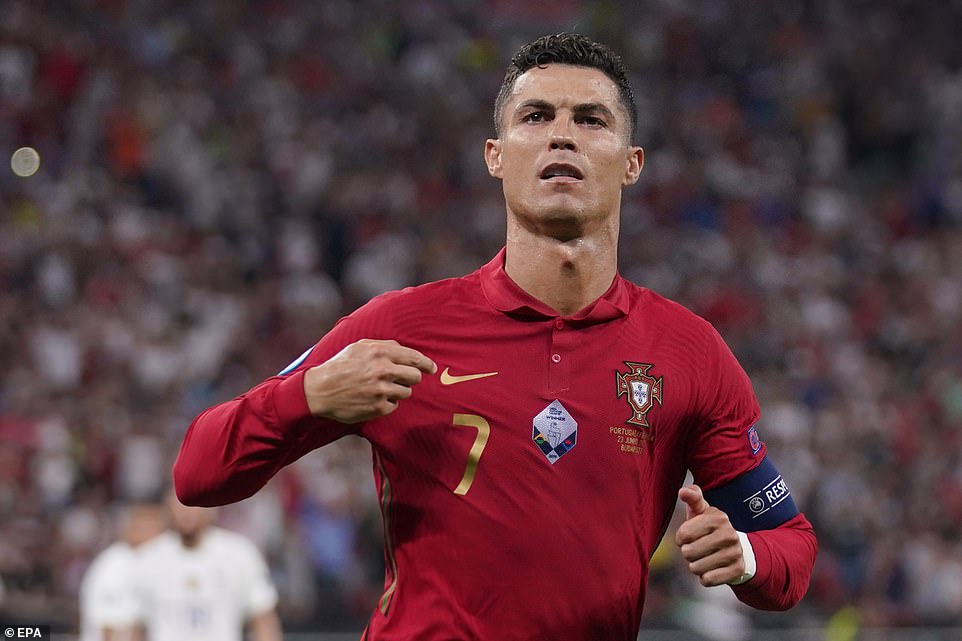 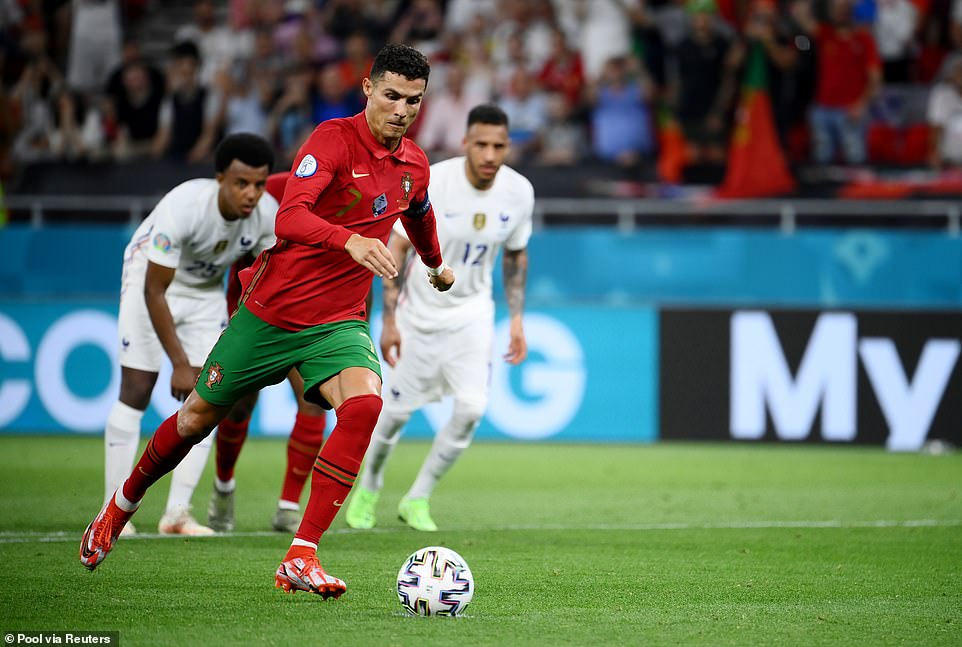 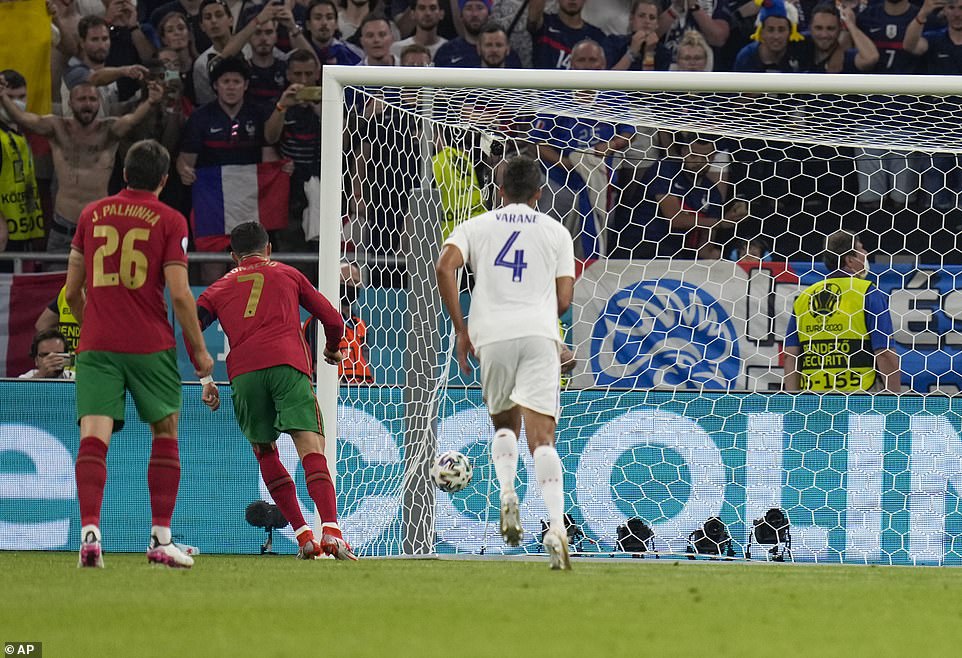 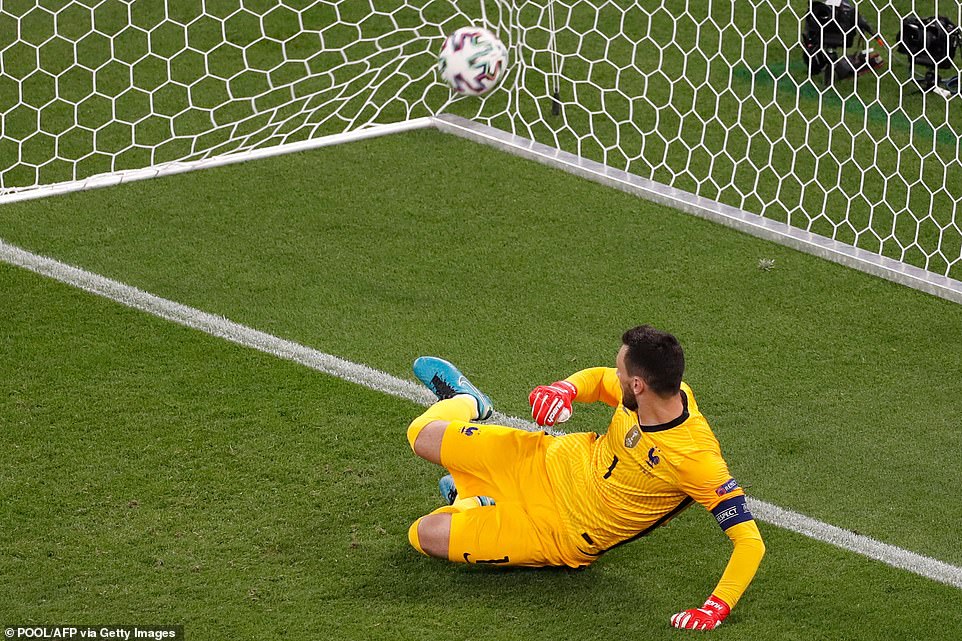 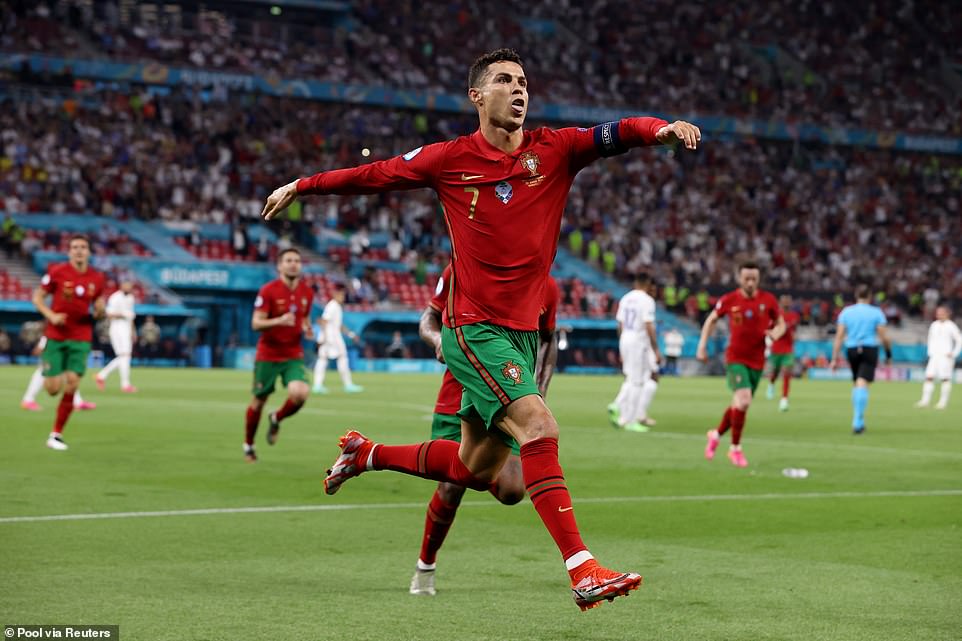 It was his second goal of the game, his fifth of the tournament and his 109th in international football, climbing level at the top of the all-time charts with Iran’s Ali Daei.

Another incredible milestone. More importantly, an equaliser to level the game at 2-2 and lift Portuguese spirits.

The holders had been sliding out of the competition as Group F stood at the stage, just before the hour mark, when the Spanish referee Antonio Mateu Lahoz gave his third penalty of the contest.

This time it was for handball against Jules Kounde as he tried to block a cross from Ronaldo. The ball struck Kounde’s hand, no question. But, just like the other two, it was fiercely debated by those on the pitch.

Ronaldo made no mistake with either of his penalties. Karim Benzema, who scored from the spot for France and added a second from open play, his first goals since ending his five-year exile from the national team. 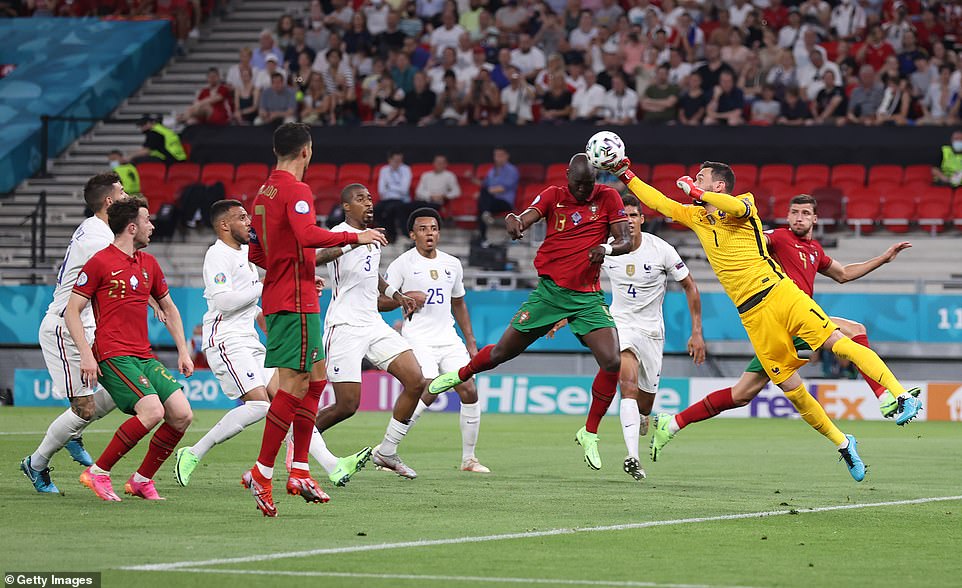 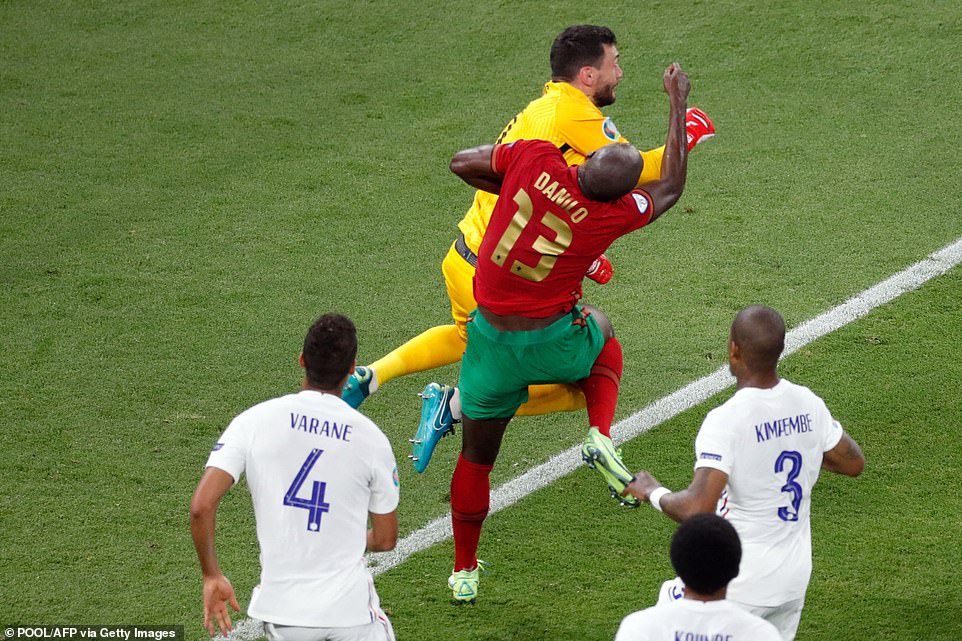 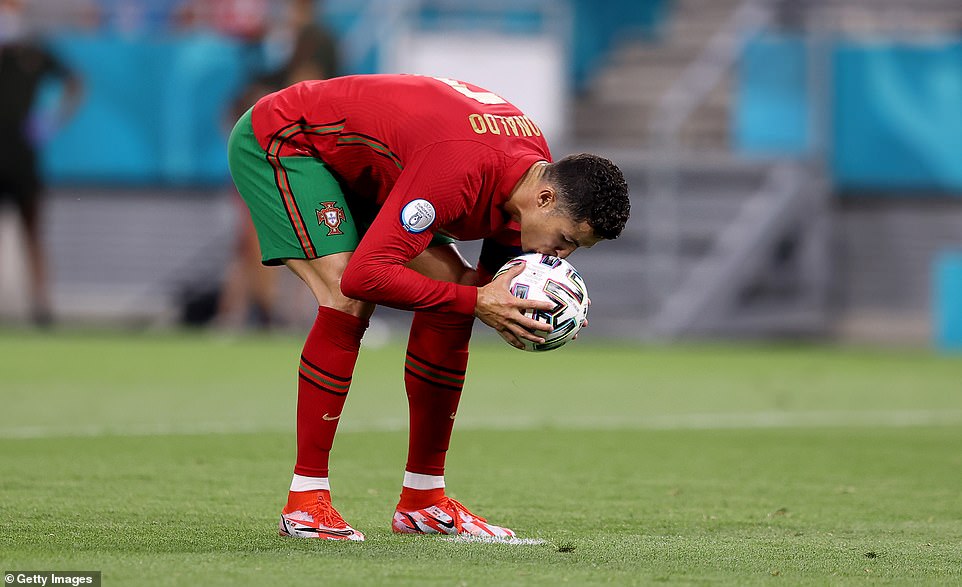 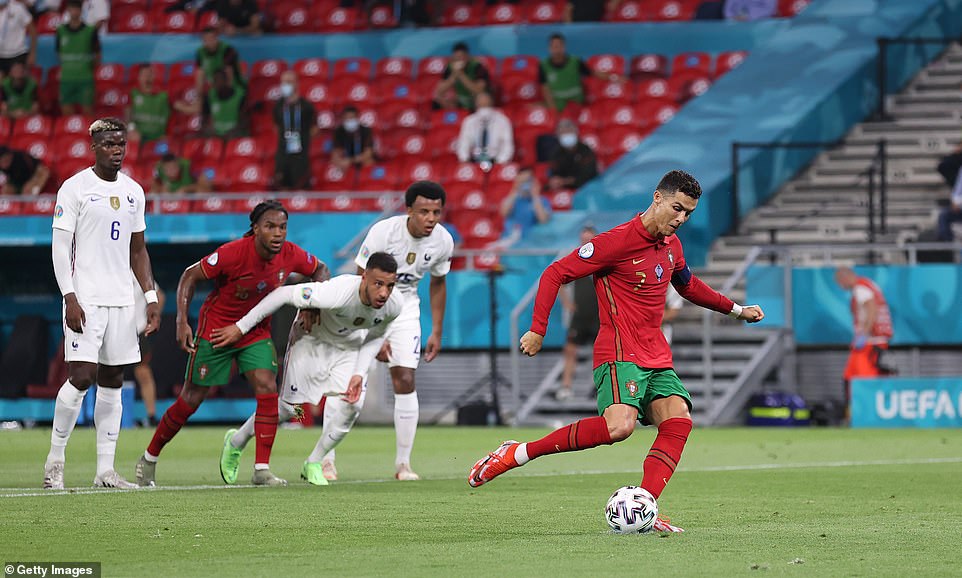 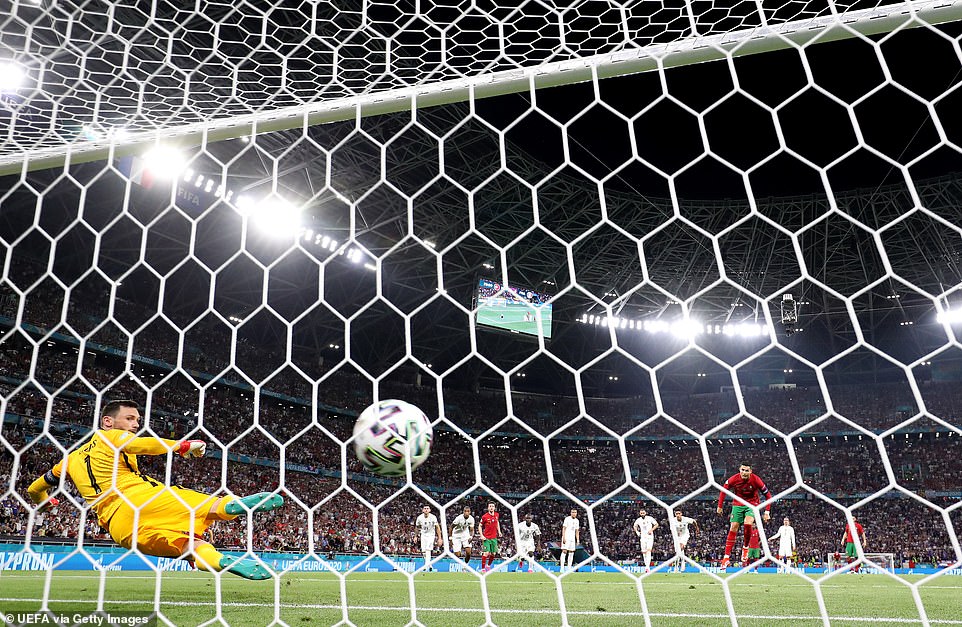 Hungary, meanwhile, were fighting for their lives in Germany and the noise inside the Puskas Arena in Budapest was off the scale.

Almighty roars greeted the goal flashes from Munich and, before them, this thrillingly breathless game before them pulsated as the world and European champions went after a winner.

Rui Patricio made a fabulous save to deny Paul Pogba a spectacular goal to cap a splendid performance and then beat away the rebound from Antoine Griezmann.

VAR checked a clumsy tackle by Bruno Fernandes on Kingsley Coman. This time the officials decided there was no foul. 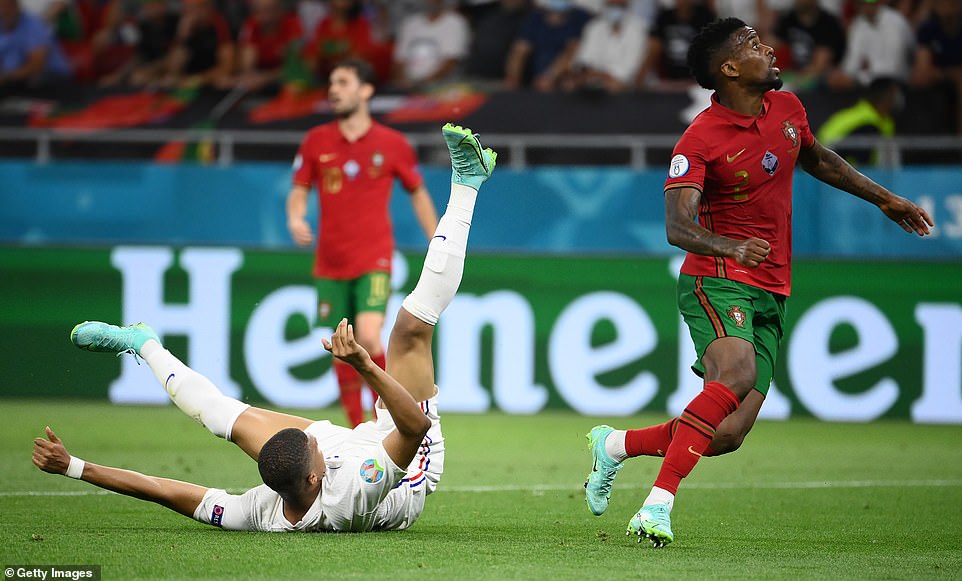 Not long after Ronaldo broke the deadlock, France were awarded a penalty of their own after Mbappe was bundled over 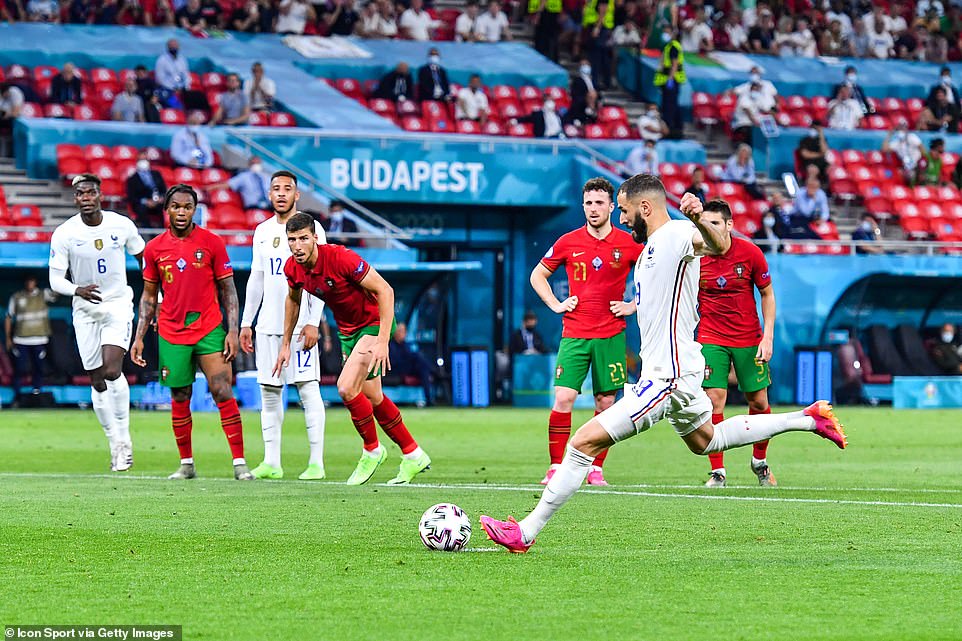 Karim Benzema, who had missed his last three penalties for France, stepped up to convert the spot-kick before half-time 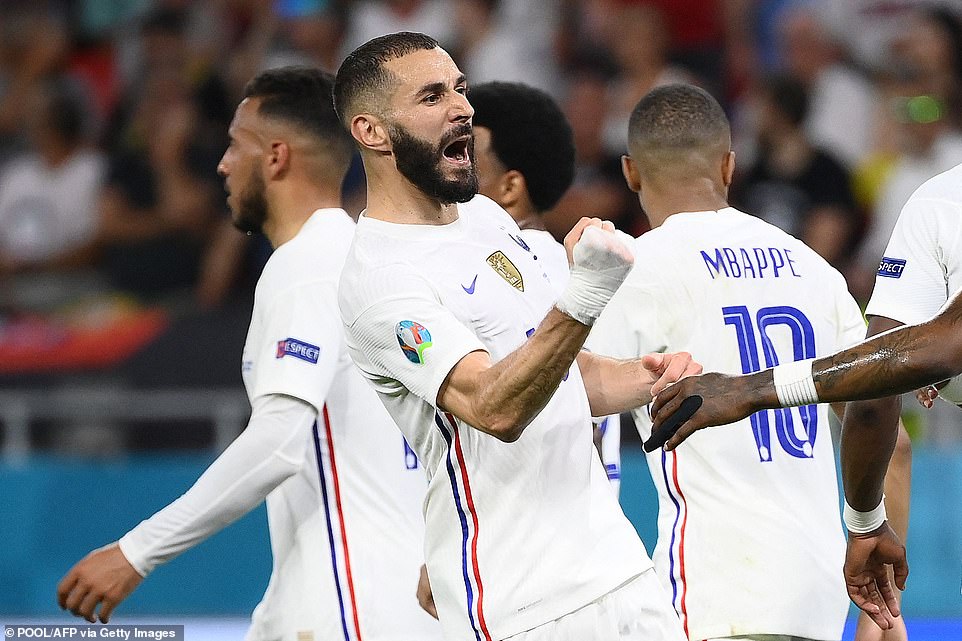 England sat and waited. One team from this group was heading their way and, in the end, it is Germany, who equalised with six minutes to spare and broke Hungarian hearts.

The group dubbed the Group of Death ended as you might have predicted at the start but there were twists, turns and no shortage of tension on the final night of the Euro 2020 group stage.

Portugal had been in every position during the course of the 90 minutes but both teams were able to celebrate with their fans long after the final whistle in the sultry heat of Budapest.

They both progressed, although not without casualties. There were injuries and they will carry yellow cards in the knock-out stages, another by-product of the closely contested games. But there are more thrills to come from the stars of these two nations. 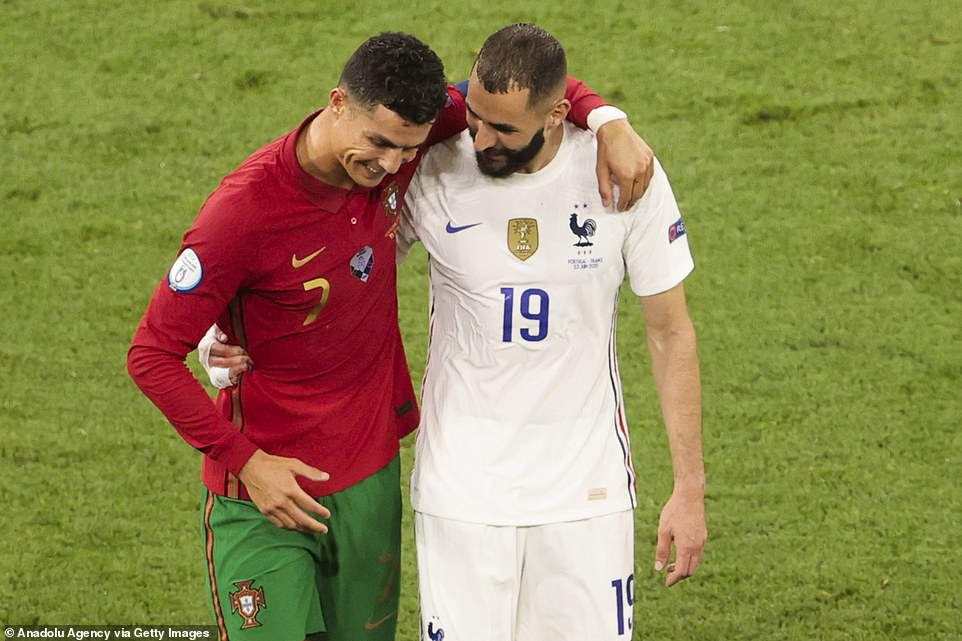 After the half-time whistle was blown, ex-Real Madrid team-mates Ronaldo and Benzema congratulate each other for scoring

France will take on Switzerland. Portugal go on to play Belgium. ‘We wanted to win but we did what we had to so,’ said boss Fernando Santos. ‘We improved and we have more to improve and we need to recuperate physically if we are to play well against Belgium. We are a tough team to beat and we seldom fail to score.’

Ronaldo gave Portugal the lead from the penalty spot, a decision disputed by the French. Joao Moutinho teased a free-kick into the penalty area and Lloris came out to punch.

Danilo climbed high, beat him by a split-second and took a fist and a forearm in the side of the face. Lloris claimed he got to the ball. And he did, there was a little glove on the ball.

There was also enough contact on Danilo to support referee Lahoz who was sure it was a penalty. In fact, it was a shock when he returned to solidier on until half-time. It will be another incident for the concussion experts to discuss. 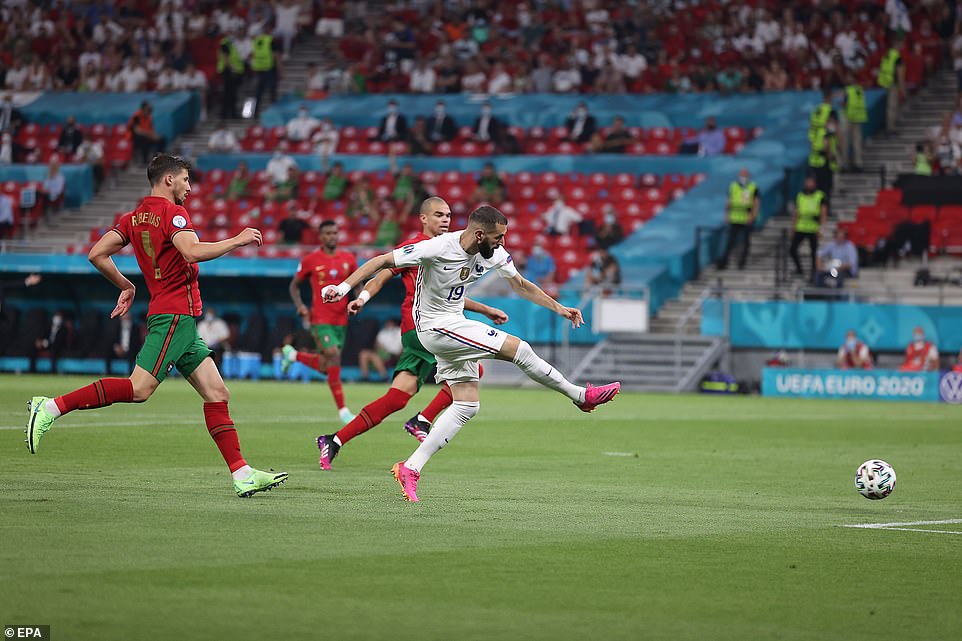 Then, minutes into the second half, Benzema timed his run perfectly to collect a Paul Pogba pass to score past Rui Patricio 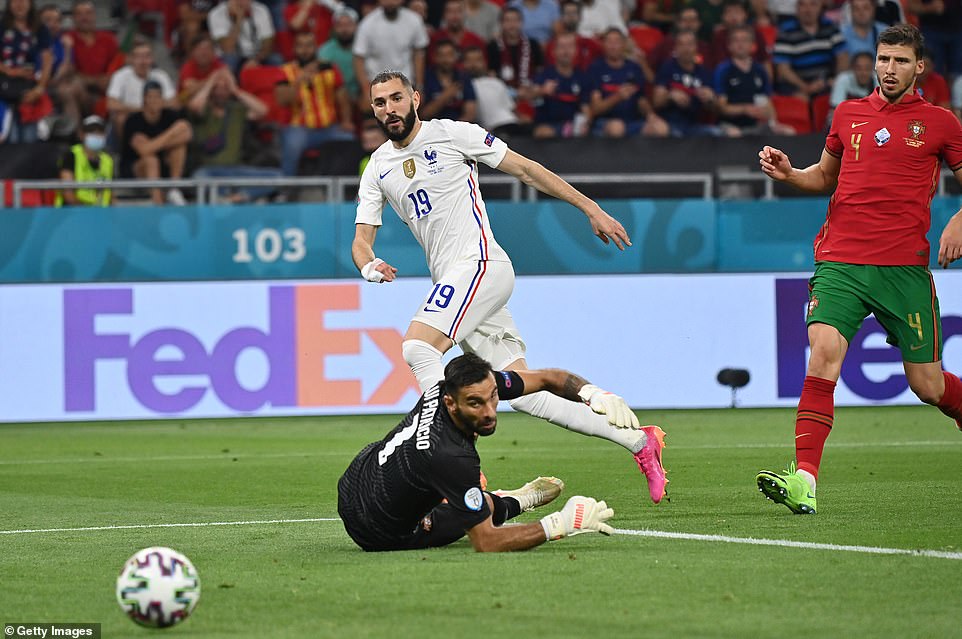 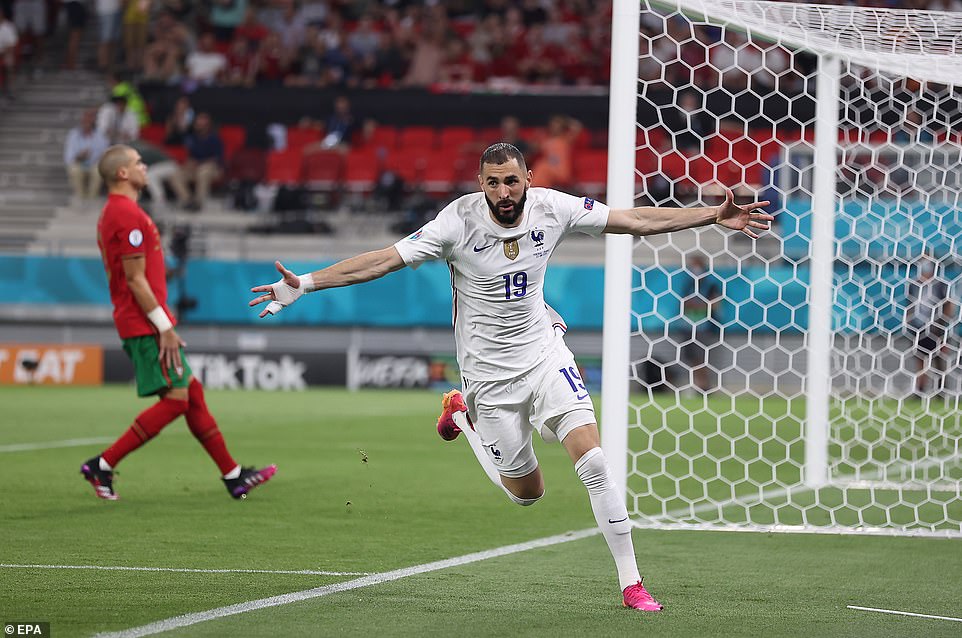 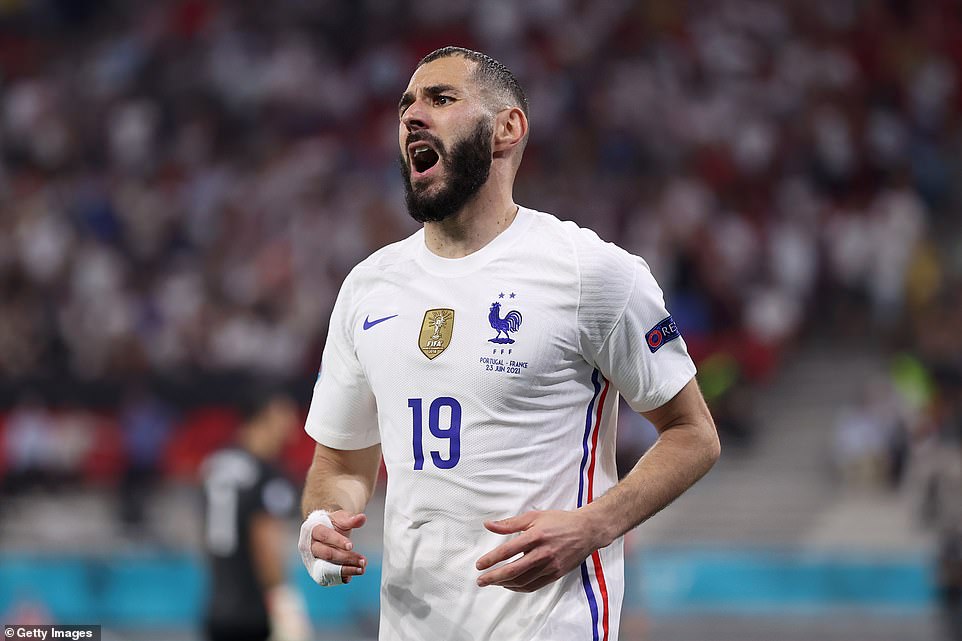 While Benzema’s initial celebrations were cut short, VAR reviewed the goal and saw that he was in fact onside

Ronaldo smashed the ball past Lloris once the protests faded. Portugal perhaps shaded the first half and deserved the lead, although the link-up between Pogba and Kylian Mbappe was always a threat.

France levelled from a disputed penalty of their own, just before the interval and it was the Pogba-Mbappe axis doing the damage. Pogba clipped a pass over right-back Nelson Semedo and Mbappe was off in a flash. Semedo panicked. There was no way of catching him.

Whether Mbappe would have got to the ball is another matter. It seemed to be drifting harmlessly out of play but Semedo moved to block the run with an arm. Mbappe bounced off him and onto the floor and Lahoz pointed straight to the spot.

This time, the red shirts pursued the referee to explain why he got it wrong but, again, the VAR supported the decision. Benzema converted from the spot and celebrated his first goal for France since ending his five-year international exile. 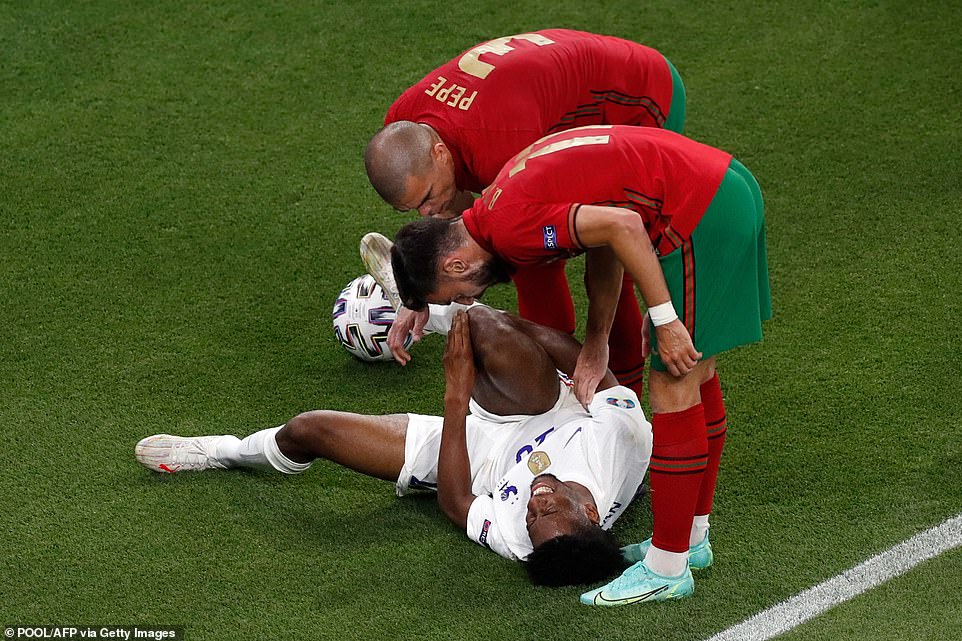 There was a heart-in-mouth moment for Bruno Fernandes, who collided with Kingsley Coman inside the area late on 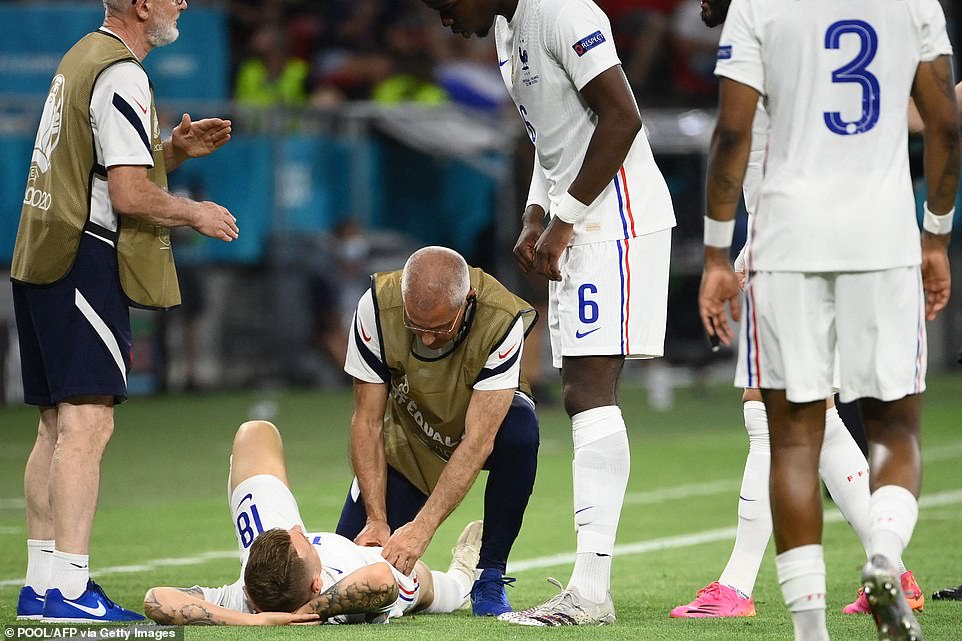 His second soon followed. Another Pogba pass sent Benzema clear and his clinical finish to beat Patricio. A flag went up for offside and it was tight but VAR intervened and the goal stood. The French were ahead.

Danilo did not make it back out for the second half. Nor did Lucas Hernandez, who missed the Hungary game to rest a niggling injury. Lucas Digne limped off injured soon after coming on to replace Hernandez. Ousmane Dembele was injured after coming on as a substitute against Hungary on Saturday. Digne did not look impressed.

France played with Adrien Rabiot at left-back and Ronaldo hauled Portugal back. He won the penalty, driving the cross at Kounde’s hand and although it was harsh on the young defender, his technique and focus from the spot was incredible.

The weight of history and the hopes of a nation rested on his shoulders but Ronaldo is made for moments such as these. 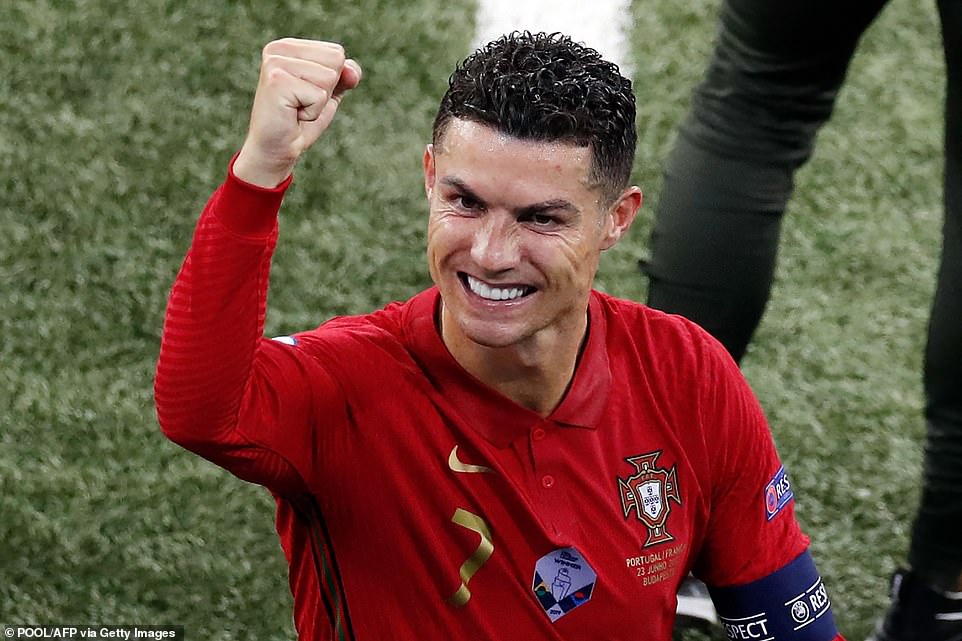 A thrilling Group F finale lies in wait as France take on Portugal at the Puskas Arena in Budapest as both chase qualification for the last-16.

France will progress if they win or if they draw and Germany fail to beat Hungary in the other game.

Portugal qualify also with a win, or if they draw and Germany lose.

Join Sportsmail’s SAM MCEVOY for all the build-up, team news, live updates and full-time result from the match.