A regional pub is being watched by cops after it vowed to defy public health orders which only allows them to serve fully-vaccinated customers, with its owner rebranding ‘Freedom Day’ as ‘Segregation Day’.

The Caledonian Hotel in Singleton in the NSW Hunter Valley, has defiantly opened its doors without checking the vaccination status of patrons since Monday, after earlier hanging a ‘Free Australia’ banner over the town’s George Street.

The town’s mayor said the actions of the Caledonian’s publican, despite being fined by police for defying the NSW Health vaccination mandate, were ‘disappointing’, as she admitted ‘Freedom Day’ was ‘more like Crazy Day’ for her town. 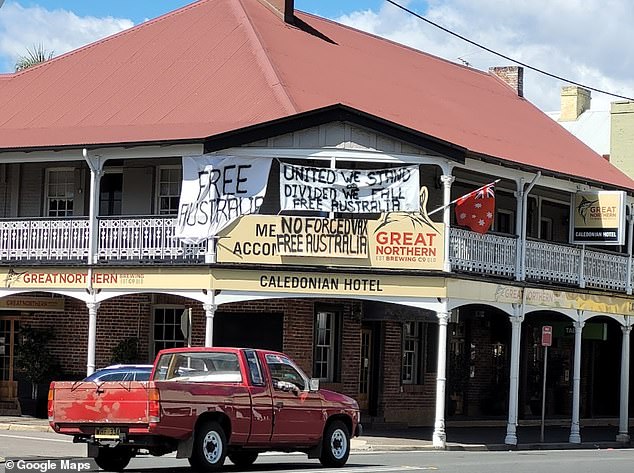 The Caledonian Hotel in Singleton in the NSW Hunter Valley, has defiantly opened its doors without checking the vaccination status of patrons since Monday 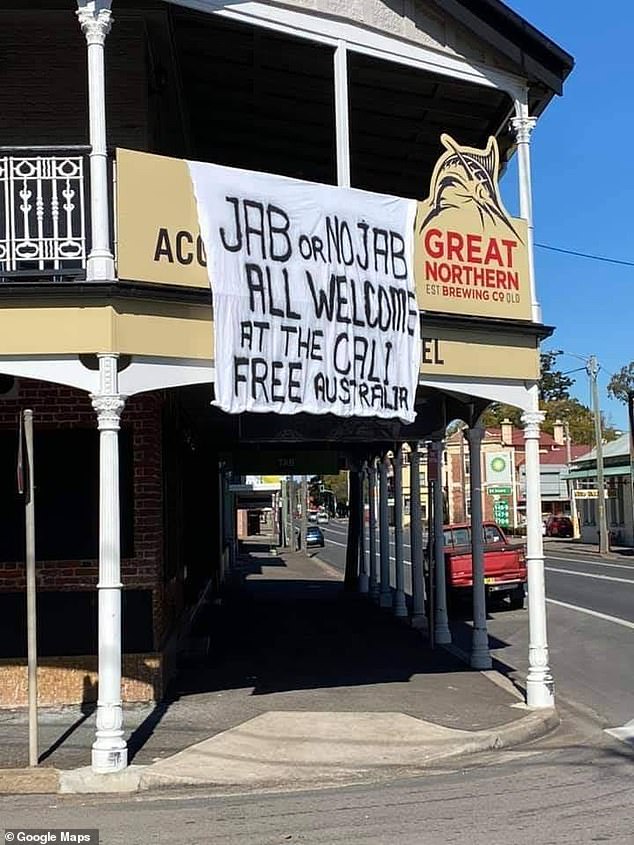 The pub’s licensee, Brad Hill claimed he challenged NSW Police to arrest him and was adamant he would continue refusing to ask patrons to prove they are vaccinated.

Should unvaccinated people be banned from pubs?

Under the public health orders governing the easing of Covid restrictions across NSW on October 11, the Monday after the state reached the 70 per cent fully vaccinated milestone, pubs were permitted to reopen to serve double-jabbed customers only.

Vaccination status must be shown at the door and the unvaccinated are not permitted until December 1.

Both Mr Hill and a barman were fined $1,000 each, while the pub created a storm on Facebook – attracting fiery debate from social media users around Australia as well is in divided Singleton, a town of 16,000 people.

In a statement to Daily Mail Australia, NSW Police confirmed it ‘spoke with the licensee – a 57-year-old man – and an employee – a 54-year-old man.’

The licensee was issued an infringement notice ‘for not taking reasonable steps to ensure unvaccinated adults were not on the premise’, which also attracting a $1,000 fine.

Officers also ‘reminded’ the licensee ‘of his obligations under the Public Health Act’, police said.

Earlier Mr Hill said the police had been ‘hounding him’ about his stand over what he called ‘segregation day’. 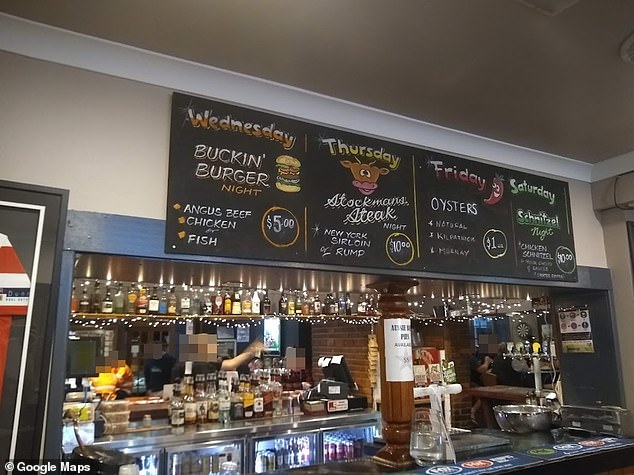 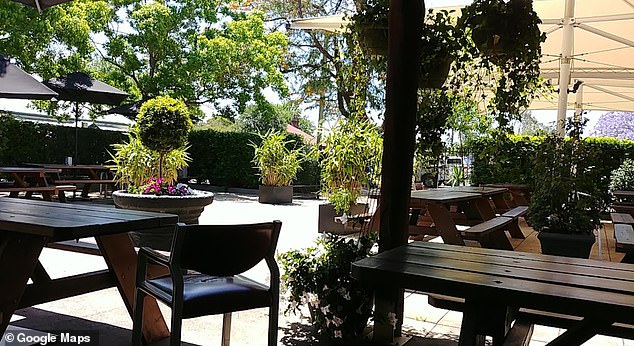 Local police issued the licensee with two penalty notices, including one for not taking reasonable steps to ensure unvaccinated adults were not on the premises (pictured, the pub)

‘I half expected to be arrested, but I said whatever you’ve got to do, but we’re not going to change our stance,’ Mr Hill told The Daily Telegraph.

In a viral social media post the pub’s thanked patrons for ‘the amazing support’ over its stand, adding the hashtags ‘united we stand’ and ‘free Australia’.

‘The Cali would like to thank you all for the amazing support we have received today and everyday. We are still here cracking along for all now and always.’

Hundreds of people swarmed to the post, bickering over rights, ‘freedom’ and public health measures.

Some felt the pub was ‘disrespecting’ its community, while others felt its management were ‘legends’.

Revised roadmap to freedom: All the changes for fully vaccinated NSW residents after hitting 70% jab target 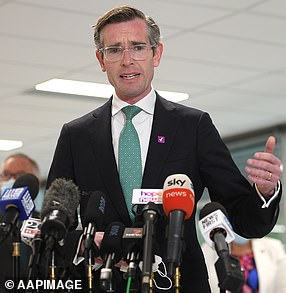 Gatherings in the home and public spaces

· Up to ten visitors will be allowed in a home where all adults are vaccinated (not including children 12 and under).

· Up to 30 people can gather in outdoor settings.

· Hospitality venues can reopen subject to one person per 4sqm inside and one person per 2sqm outside, with standing while drinking permitted outside.

· Retail stores can reopen under the one person per 4sqm rule (unvaccinated people will continue to only be able to access critical retail).

· Personal services such as hairdressers and nail salons can open with one person per 4sqm, capped at five clients per premises.

· Gyms and indoor recreation facilities can open under the one person per 4sqm rule and can offer classes for up to 20 people.

· Major recreation outdoor facilities including stadiums, racecourses, theme parks and zoos can reopen with one person per 4sqm, capped at 5,000 people.

· Up to 500 people can attend ticketed and seated outdoor events.

· Indoor entertainment and information facilities including cinemas, theatres, music halls, museums and galleries can reopen with one person per 4sqm or 75 per cent fixed seated capacity.

Weddings, funerals and places of worship

· Up to 100 guests can attend weddings, with dancing permitted and eating and drinking only while seated.

· Up to 100 guests can attend funerals, with eating and drinking while seated.

· For those not fully vaccinated lower caps of 5 and ten apply for weddings and funerals.

· Churches and places of worship to open subject to one person per 4sqm rule, with performers exempt from ban on singing.

· Ten person cap on choirs in places of worship and at religious services, with all performers to be fully vaccinated

· The 5km radius will be dropped but Sydneysiders can only travel within greater Sydney – including the Central Coast, Wollongong and Blue Mountains.

· Carpooling will be permitted.

Non-vaccinated young people aged under 16 will be able to access all outdoor settings but will only be able to visit indoor venues with members of their household.

Employers must continue to allow employees to work from home if the employee is able to do so.

There will be revised guidance on isolation for close and casual contacts who are fully vaccinated, with details to be provided closer to the reopening date.

· Masks will remain mandatory for all indoor public venues, including public transport, front-of-house hospitality, retail and business premises, on planes and at airports.

· Only hospitality staff will be required to wear a mask when outdoors.

· Children aged under 12 will not need to wear a mask indoors.

‘Cmon guys. If you feel so strongly about refusing to enforce the law like every other pub is doing, stay closed til December 1,’ one local wrote.

‘I would 100% pay an entry fee to come to your pub to help cover the cost of any fine you could receive for not discriminating! You are absolute legends in my eyes,’ said one woman.

‘How is it that last week we could freely go to the pub with no vaccine but a week later ya need to be double vaxxed makes total sense to me?’ another wrote.

Singleton’s mayor, Sue Moore, told Daily Mail Australia while the pub’s actions were ‘disappointing’, she acknowledged residents were reeling from several changes to the rules they faced in a matter of weeks.

‘I would say it’s disappointing the Cali has gone down this avenue, everyone knew the rules that would be in place.’ 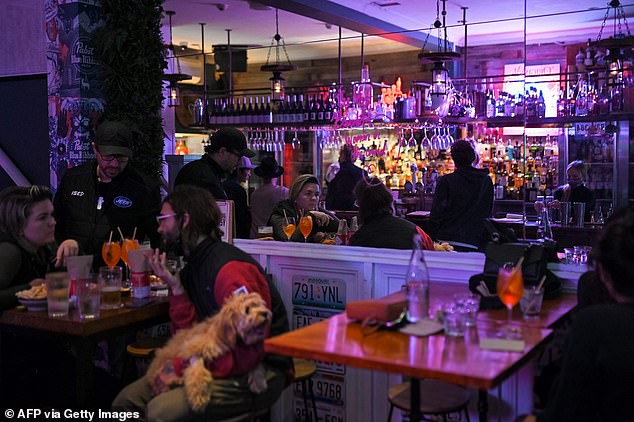 ‘It’s not the end of the world [for people to wait until December 1],’ she said.

‘I think we have to have to deal with it if it helps keep everyone else safer, we have to be a little bit more patient.’

Ms Moore said part of the the town was reeling after several major changes to Covid restrictions in recent weeks.

In early September the town was placed in a snap lockdown, along with several LGAs in the NSW Central West.

It was then released from lockdown three weeks ago, with shops, pubs and restaurants permitted to serve customers with no restrictions for the unvaccinated.

‘People were walking around after that lockdown ended three weeks ago as if it was Freedom Day and I was thinking ‘you have no idea what’s coming’.

She said the sudden changes in rules made little sense to many people in town.

‘You can go here one day and not the next, it’s like suddenly the wall came down.’

‘Someone said to me, are you looking forward to Freedom Day? It seems more like crazy day to me.’

Ms Moore said she had been in contact with local police area commander, who was ‘monitoring’ the pub and issuing fines, though she believed the only fines issued so far were to the licensee and a bar for being in the premises unvaccinated.

It is understood the pub plans to fight any major fines it faces.