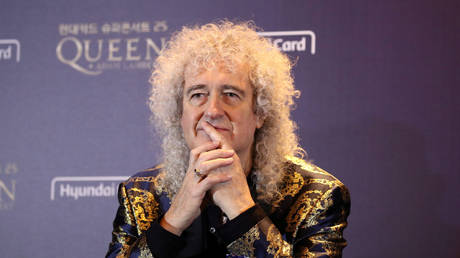 Brian May has accused the media of twisting his words, after he appeared to criticize modern ‘woke culture’ and the Brit Awards’ decision to scrap gendered categories for entertainers.

The iconic musician and member of the legendary rock band Queen was “ambushed and completely stitched” by a journalist during last week’s ITV Palooza, he said on Instagram. The resulting media reports are “making it look like I’m unfriendly to trans people. Nothing could be further from the truth,” he said.

May was apparently referring to an interview published by the tabloid Mirror, in which he is quoted as lamenting the state of the modern entertainment industry and suggesting that Queen would not have thrived in it due to its supposed lack of diversity.

“We would be forced to have people of different colors and different sexes and we would have to have a trans [person],” he was quoted as saying. Such sensibilities were not present when Queen reached its stardom, he suggested.

“For instance, Freddie came from Zanzibar, he wasn’t British, he wasn’t white as such – nobody cares, nobody ever, ever discussed it,” he said of Queen frontman Freddie Mercury.

The Mirror linked the remarks to May’s comments on last week’s decision by the Brit Awards to do away with separate categories for male and female singers starting this year.

“I get so sick of people trying to change things without thinking of the long-term consequences. Some of these things are an improvement, some of them are not,” May was quoted as saying, before complaining about an “atmosphere of fear” preventing opponents of such changes from saying what “they really think.”

In his new statement, the 74-year-old musician apologized to “anyone who has been hurt by the stories,” and said that his heart “is open as always to humans of all colors, all creeds, all sexes and sexualities, all shapes and sizes – and all creatures.”

Palooza was held on the eve of the 30th anniversary of Mercury’s death from AIDS. The event included a tribute to the trailblazing performer, with singer Adam Lambert, who has been collaborating with the band since 2011, performing Queen’s hit ‘The Show Must Go On’ on stage.