A flag waving protestor tonight ran onto the pitch as Germany prepared to face Hungary, while German stadia were lit up in rainbow colours in protest against Hungary’s new anti-LGBT laws.

The protester, carrying a rainbow flag, ran past security staff and on to the pitch as Hungary’s players prepared to sing their national anthem. The fan, who was wearing a Germany shirt, was later tackled by stewards and led away.

Meanwhile, in an act of defiance against both UEFA and Viktor Orban’s Hungary government, stadia across Germany lit up in rainbow colours.

It came after UEFA banned officials in Munich from lighting up the Allianz Arena in Munich with rainbow colours ahead of tonight’s game between Germany and Hungary.

Meanwhile, Orban reportedly cancelled his trip to watch the crucial game amid the planned protest against Hungary’s anti-LGBT law – which will see a ban on LGBT educational content being taught to children.

Orban had earlier called on German politicians to accept the decision by the UEFA not to allow the display, though fans had vowed to wear rainbow coloured outfits and protest in defiance.

Meanwhile, Munich’s mayor Deiter Reiter ensured there was some protest, as Munich put up six huge rainbow-coloured flags at its town hall and illuminated a huge wind turbine close to the stadium, as well as the city’s 291-metre (955-foot) Olympic Tower.

‘Whether the Munich football stadium or another European stadium is lit in rainbow colours is not a state decision,’ Orban said, adding that the colours are seen in the streets of Budapest.

‘In communist Hungary, homosexual people were persecuted. Today, the state not only guarantees the rights of homosexuals, but actively protects them.’ 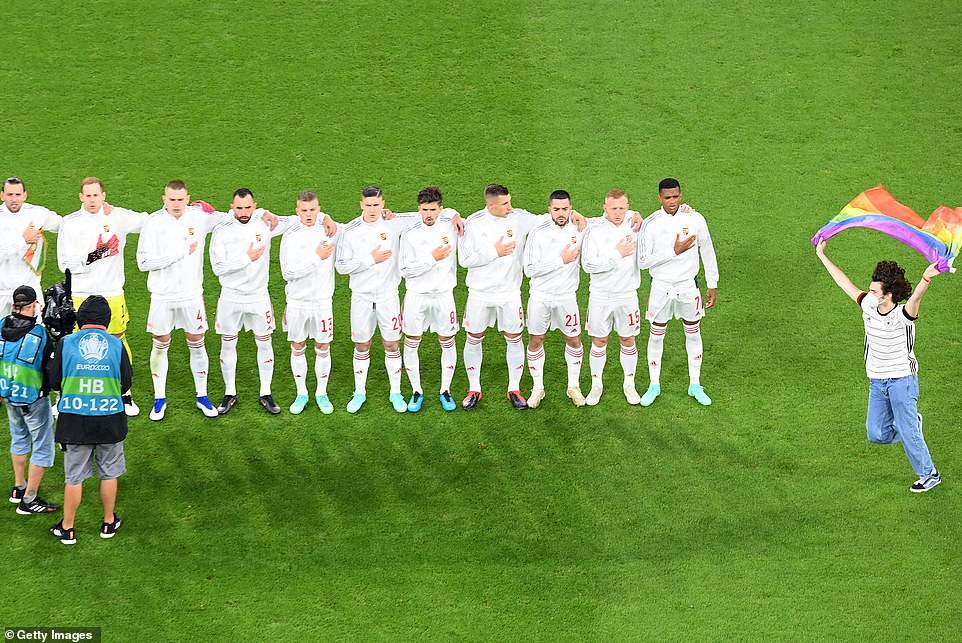 A flag waving protestor tonight ran onto the pitch as Germany prepared to face Hungary, while German stadia were lit up in rainbow colours in protest against Hungary’s new anti-LGBT laws 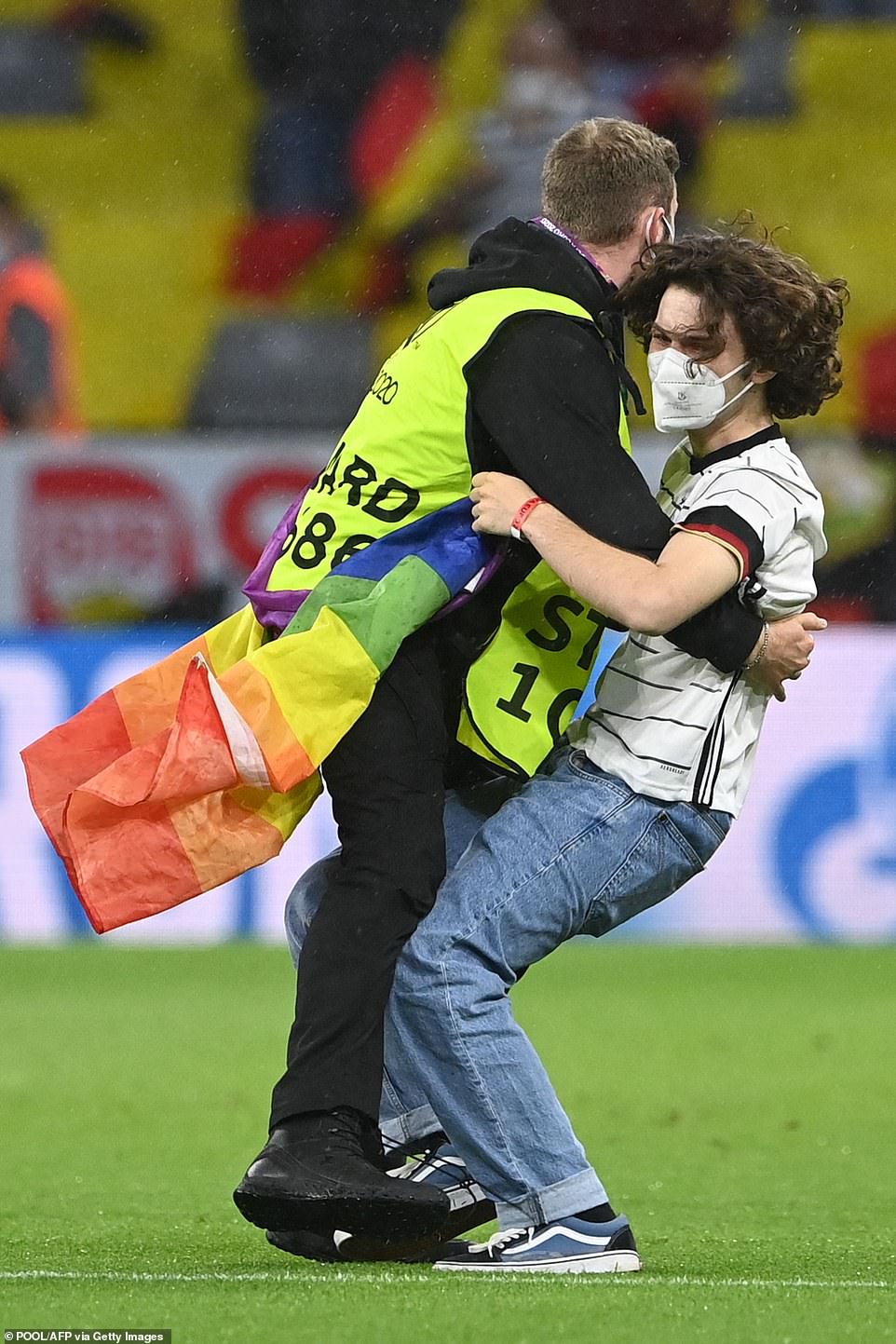 The protester, carrying a rainbow flag, ran past security staff and on to the pitch as Hungary’s players prepared to sing their national anthem. The fan, who was wearing a Germany shirt, was later tackled by stewards and led away 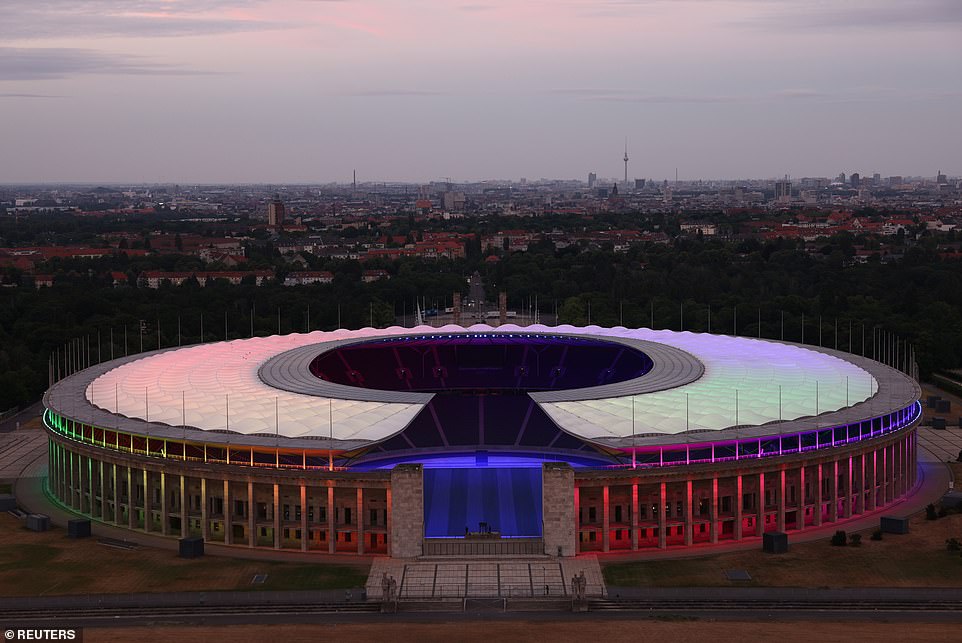 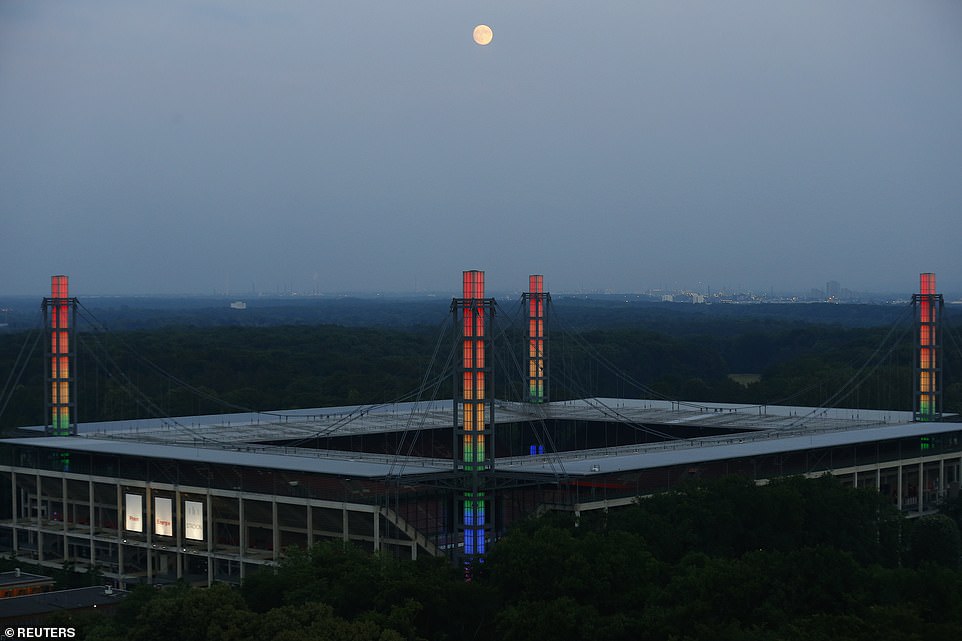 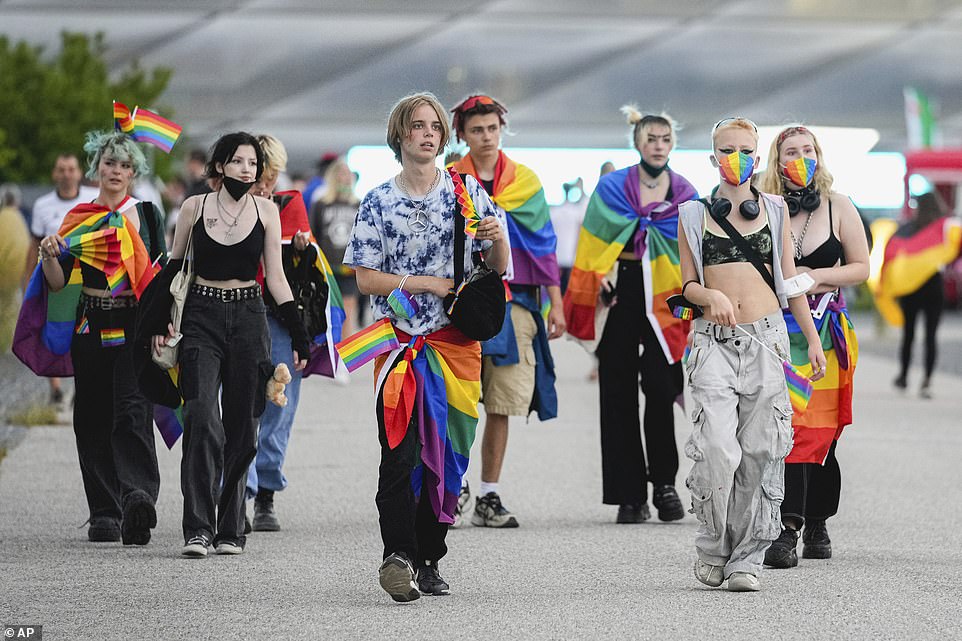 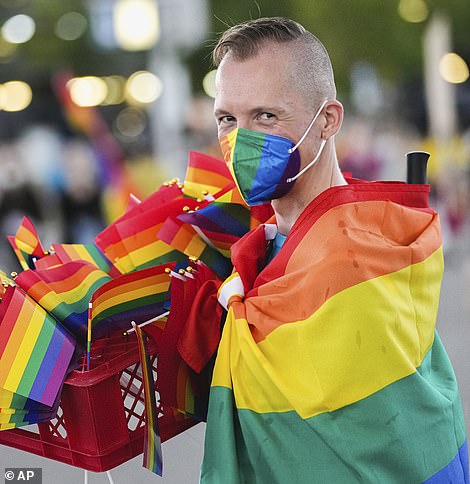 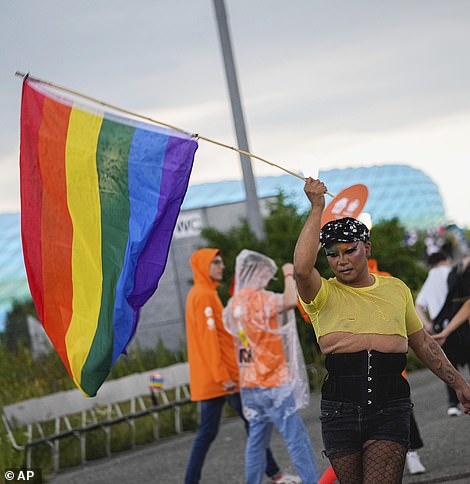 Others gave out rainbow flags outside the Allianz Arena tonight. Fans were seen waving rainbow flags in protest at anti-LGBT laws in Hungary 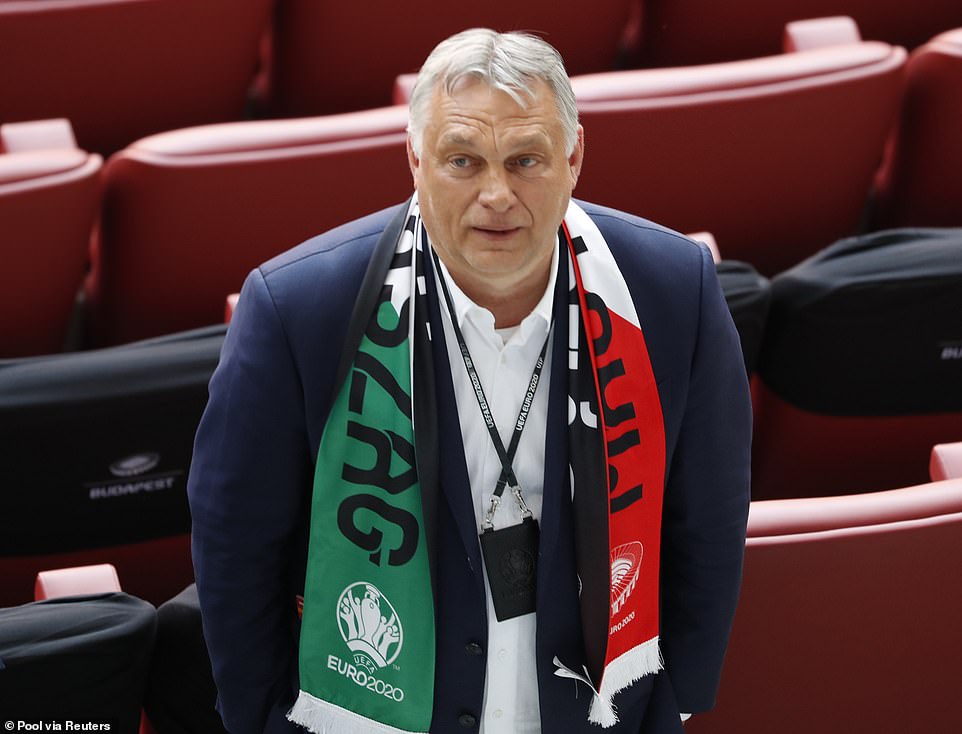 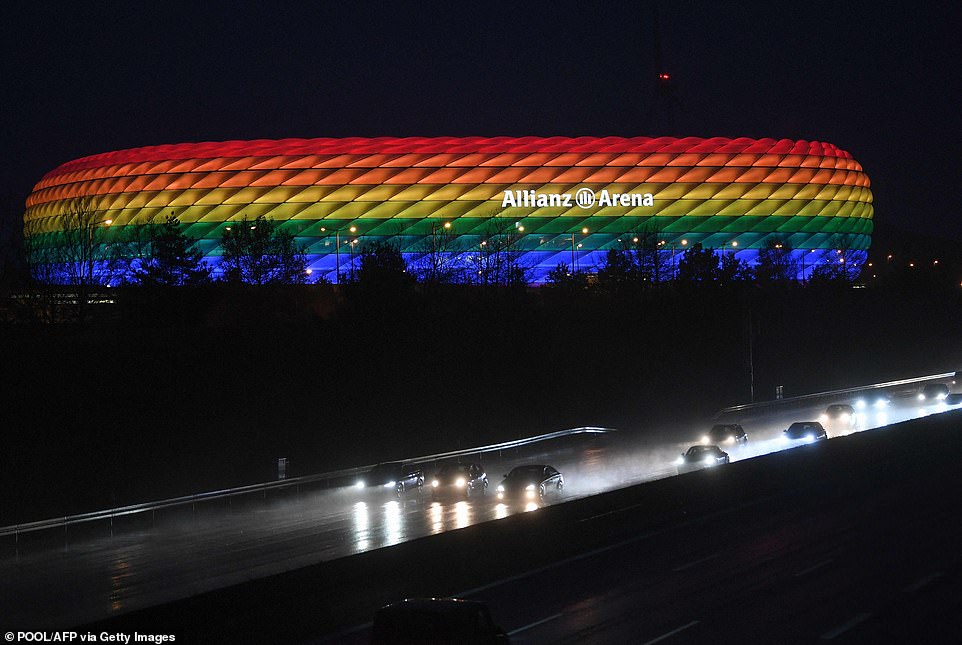 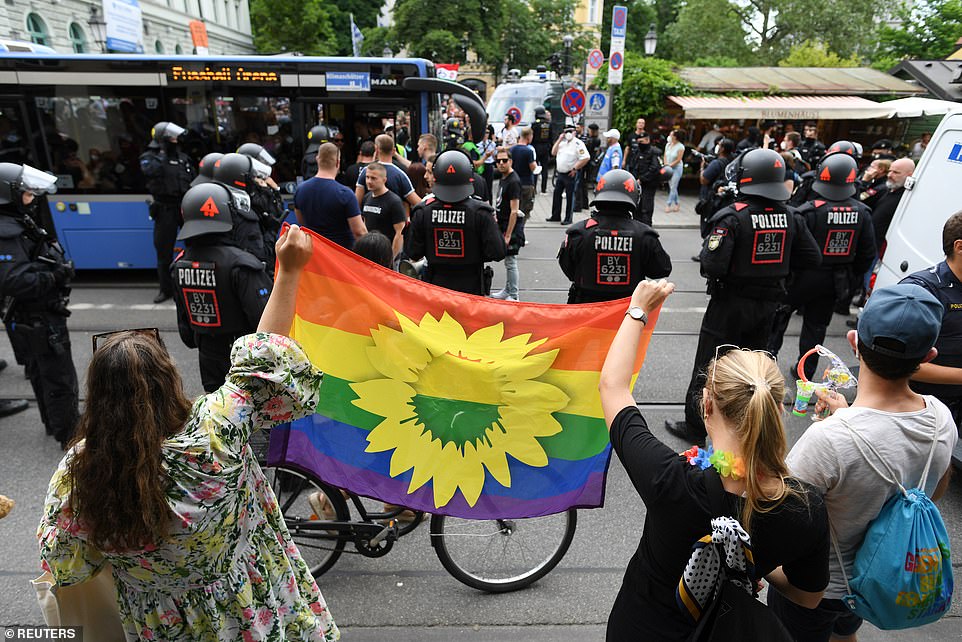 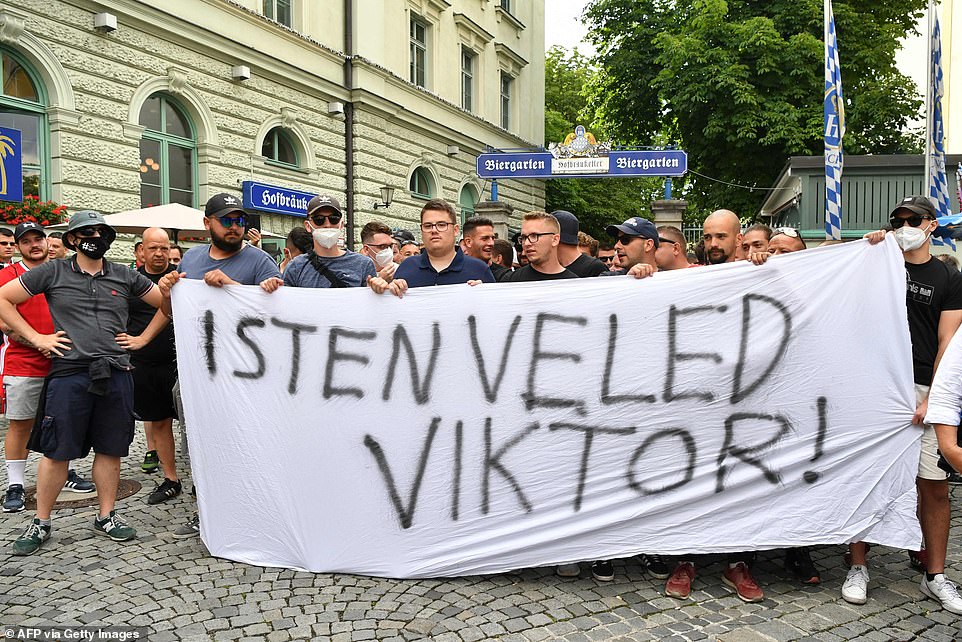 Hungary’s supporters are seen at Wienerplatz in Munich holding a banner reading ‘God is with you Viktor!’ 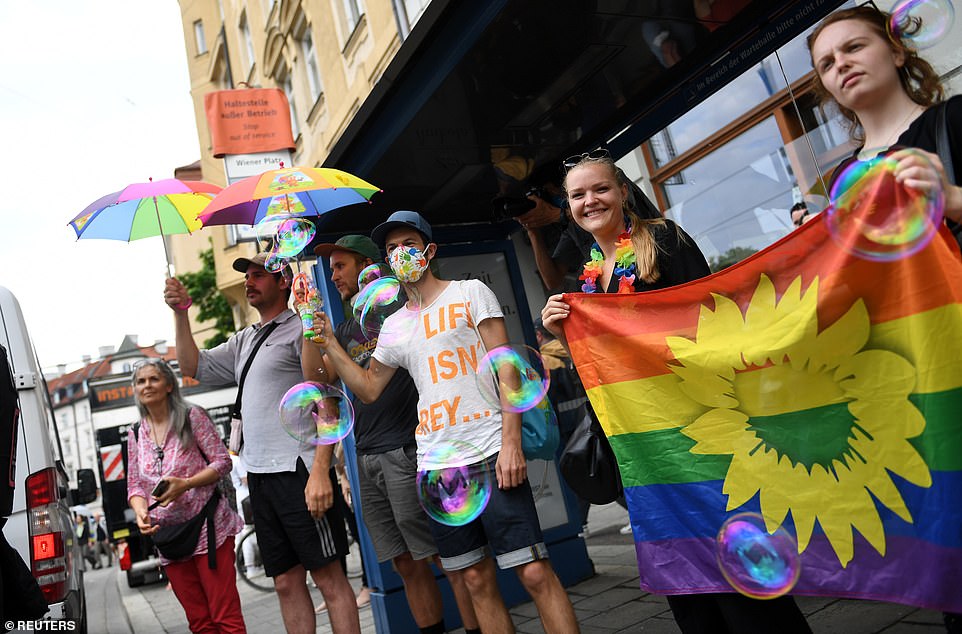 UEFA has insisted it ‘respects the rainbow,’ while refusing to allow Munich’s stadium to be lit up in the colours of the LGBTQ+ flag. Pictured: People display a rainbow flag and umbrellas in front of police officers and Hungary fans in Munich on Wednesday

Hungary’s new law is ostensibly designed to crack down on paedophilia, but critics argue amendments to it make a dangerous link between homosexuality and the abuse of minors.

The law prohibits sharing any content portraying homosexuality or sex reassignment to children under 18 in school sex education programs, films and advertisements.

Human rights groups have denounced the measure, saying it could be used to stigmatize and harass residents because of their sexual orientation or gender identities, and deprive young people of essential sex education information.

Thousands have protested in Hungary’s capital of Budapest against the measures.

A number of EU countries including Germany have condemned the law, and a joint statement was released on Tuesday voicing ‘grave concern’ about its impact on the LGBT community.

Reiter had been pushing to illuminate the stadium in his city as a direct response to legislation approved by Orban’s populist right-wing government in Hungary banning gay people from appearing in educational materials in schools or messages that promote gender change for under 18s.

European football’s governing body, which appears to be developing a cosy relationship with Hungary — as demonstrated by its position as a back-up choice for the Euro 2020 final — dismissed the request because of its ‘political context’.

But amid controversy over the move, UEFA today issued a statement which said the organisation is ‘proud to wear the colours of the rainbow’.

UEFA added: ‘Some people have interpreted UEFA’s decision to turn down the city of Munich’s request to illuminate the Munich stadium in rainbow colours for a EURO 2020 match as “political”.

‘On the contrary, the request itself was political, linked to the Hungarian football team’s presence in the stadium for this evening’s match with Germany.

‘For UEFA, the rainbow is now a political symbol, but a sign of our firm commitment to a more diverse and inclusive society.’

But after UEFA’s decision to dismiss the request, Germany left them with no doubt what they thought about the snub.

German player Mats Hummels turned up for a pre-match press conference wearing a multi-coloured shirt branded with the slogan ‘love unites’ and spoke of the positive impact sportsmen and women can make on society.

Boss Joachim Low said he would have been ‘happy if the stadium was illuminated in rainbow colours’ and that it was important not only to provide ‘symbols’, but also to ‘live with these values’.

Captain Manuel Neuer has promised he will continue to wear the rainbow armband, which briefly sparked a disciplinary investigation by UEFA before they back-tracked.

The armband is a statement not only from Neuer in Pride month, but from the entire team against hate and homophobia. The message was clear enough, even if the Germans had conceded defeat on the rainbow illumination plan.

‘I would have enjoyed it, personally,’ said Hummels. ‘Without wanting to cause any trouble, I’m a friend and I’m a supporter of messages like this to the world.

‘It should be accepted in sport. It should be normal. Every small symbol and gesture is a step in the right direction — that’s the message of the team.’ 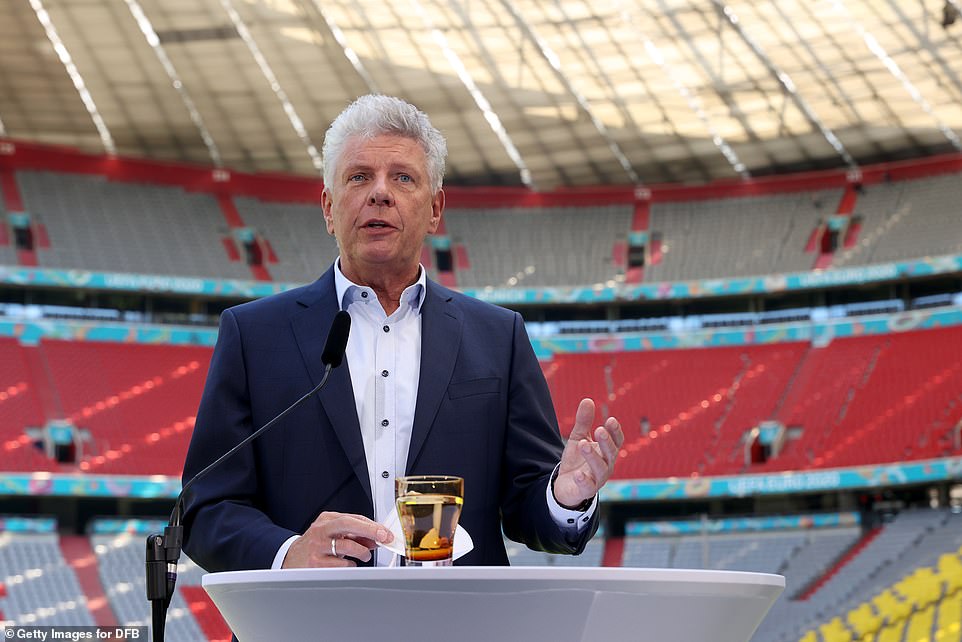 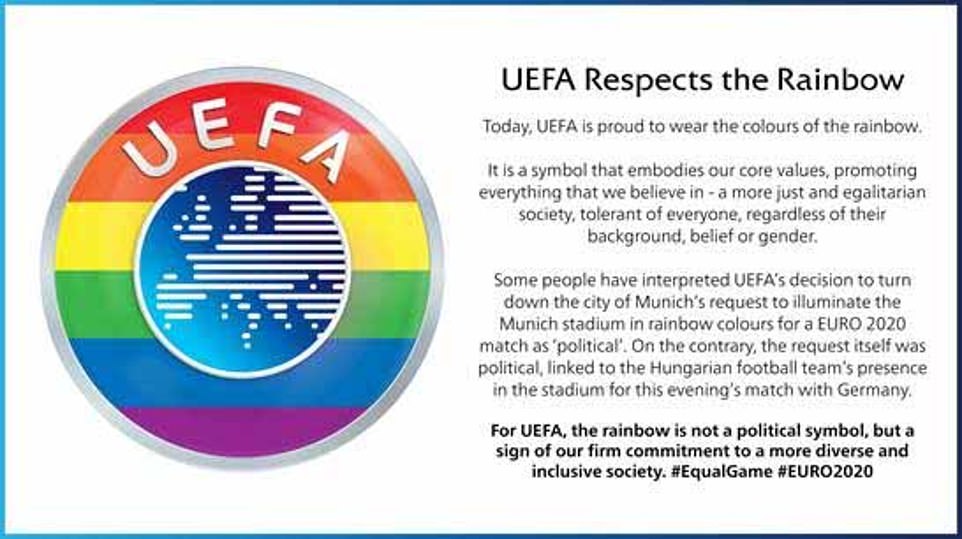 But amid controversy over the move, UEFA today issued a statement which said the organisation is ‘proud to wear the colours of the rainbow’ 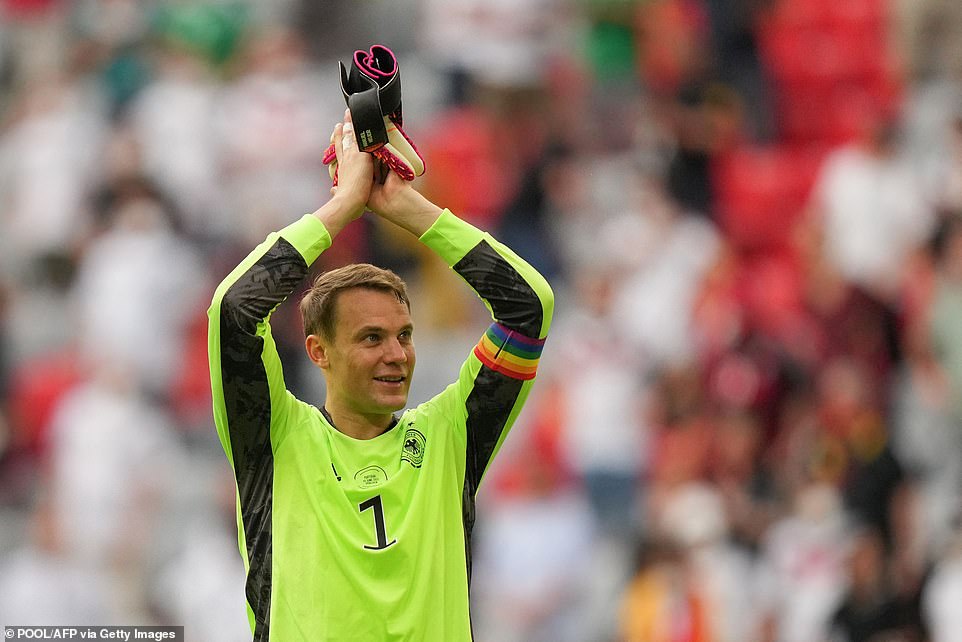 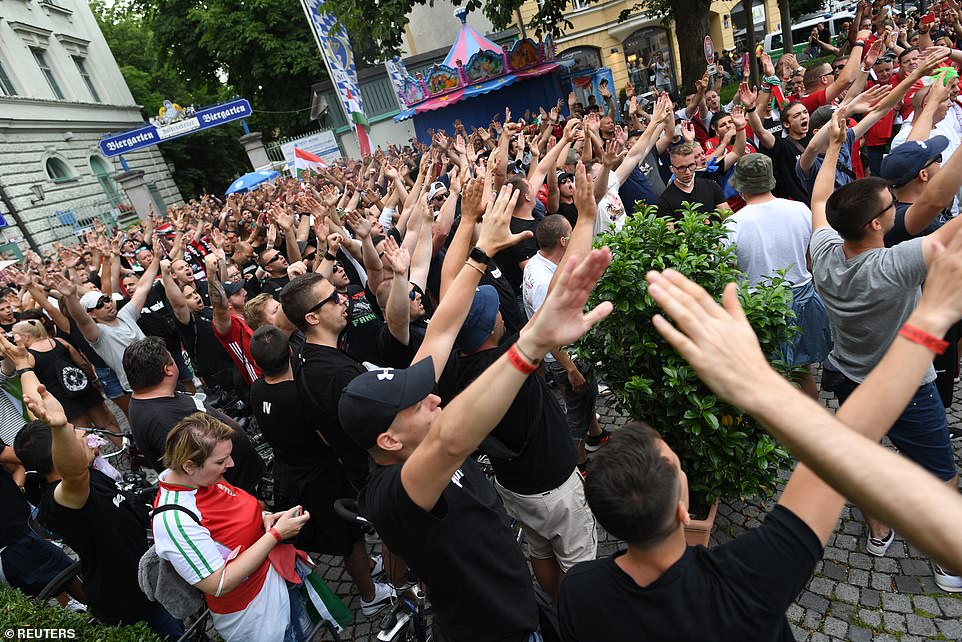 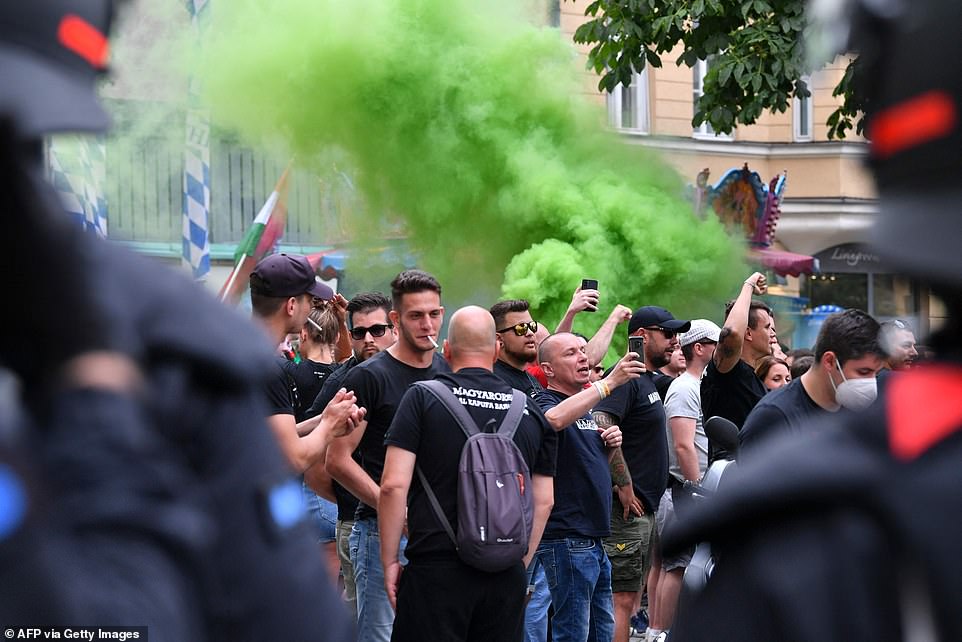 Multiple Bundesliga clubs, including Wolfsburg, Hertha Berlin, Eintracht Frankfurt and FC Cologne, have pledged to illuminate their stadiums during the game. Pictured: Hungary fans in Munich on Wednesday 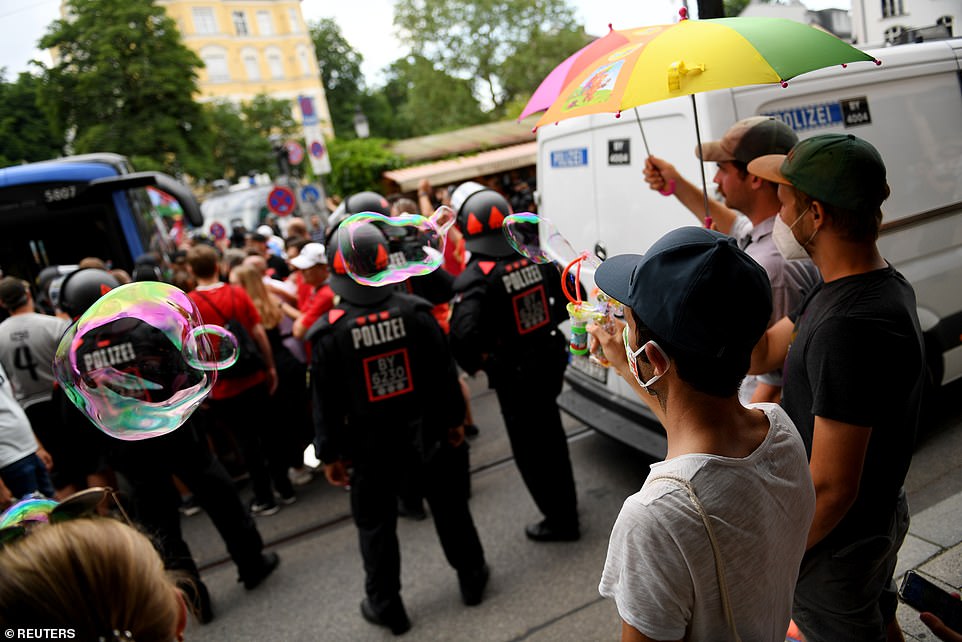 Munich mayor Reiter slammed the decision by UEFA, saying: ‘I find it shameful that UEFA forbids us to send a message here in Munich for tolerance, respect and solidarity with the LGBTQI+ community. Pictured: People display rainbow umbrellas next to arriving Hungary fans in Munich

Revealing their decision to ban Munich from lighting up the stadium in rainbow colours, the UEFA proposed alternative dates for the stadium to be lit up and issued a flaky statement, which said: ‘UEFA understands that the intention is also to send a message to promote diversity and inclusion — a cause which UEFA has been supporting for many years — having joined forces with European clubs, national teams and their players, launching campaigns and plenty of activities all over Europe.

‘And consequently, UEFA has proposed alternative dates for the illumination which align better with existing events.’

That stance has been ridiculed across football. Multiple Bundesliga clubs, including Wolfsburg, Hertha Berlin, Eintracht Frankfurt and FC Cologne, have pledged to illuminate their stadiums during the game.

France striker Antoine Griezmann also posted a picture of the Allianz Arena in rainbow colours with a rainbow emoji and a fist.

All of which made UEFA’s stance seem like another PR own goal by UEFA president Aleksander Ceferin.

Munich mayor Reiter slammed the organisation and said: ‘I find it shameful that UEFA forbids us to send a message here in Munich for tolerance, respect and solidarity with the LGBTQI+ community.

‘I am also very disappointed that the DFB (the German football federation), despite the unbelievably clear positioning here in Munich, has not achieved anything.’

Meanwhile, Georginio Wijnaldum will reiterate Holland’s anti- discrimination stance by wearing a special captain’s armband in their last 16 tie in Budapest on Sunday. 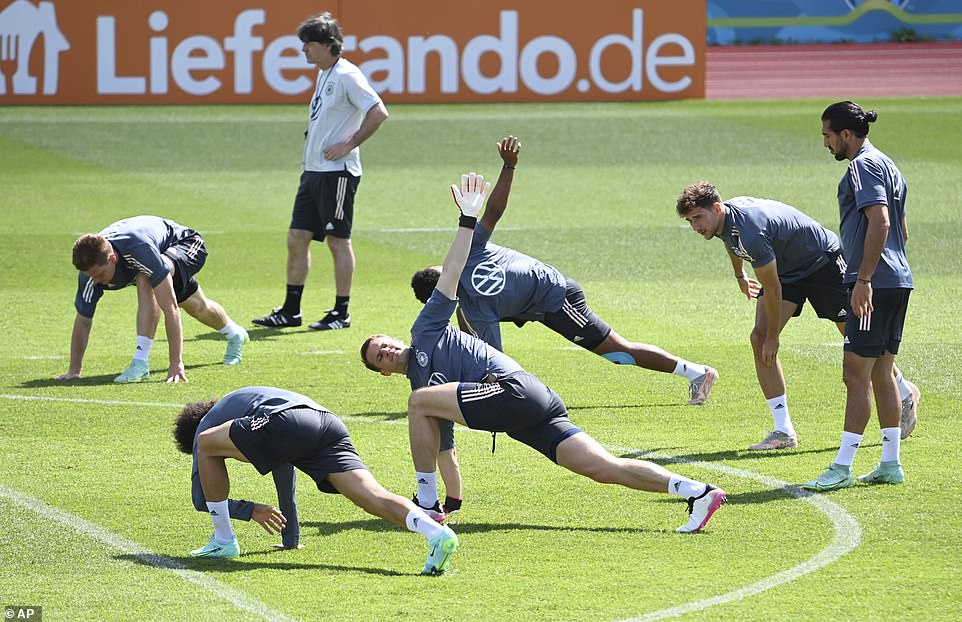