Russia has carried out a deadly missile strike on a busy shopping centre in Ukraine in Putin’s latest barbaric attack against civilians, with scores feared dead.

The crowded mall in Kremenchuk had around 1,000 shoppers inside when missiles rained down on the building this afternoon in what Ukraine described as a ‘crime against humanity’.

Officials have initially said at least two people have been killed and 20 are injured but the death toll is expected to rise.

A rescue operation is under way and nine of the wounded are in a serious condition.

Panicked survivors desperately tried to flee for safety as the complex erupted in fire, with plumes of black smoke billowing into the sky.

Putin’s war propagandist Andrey Rudenko has already predictably dismissed the brutal assault as a ‘fake’ operation carried out by Kyiv. Russia previously made the same outlandish claims about the atrocities in Bucha.

Volodymyr Zelensky said on Telegram: ‘It is impossible to even imagine the number of victims.

‘It’s useless to hope for decency and humanity from Russia.’

Zelensky stressed that the target presented ‘no threat to the Russian army’ and had ‘no strategic value’ accusing Russia of sabotaging ‘people’s attempts to live a normal life, which make the occupiers so angry’. 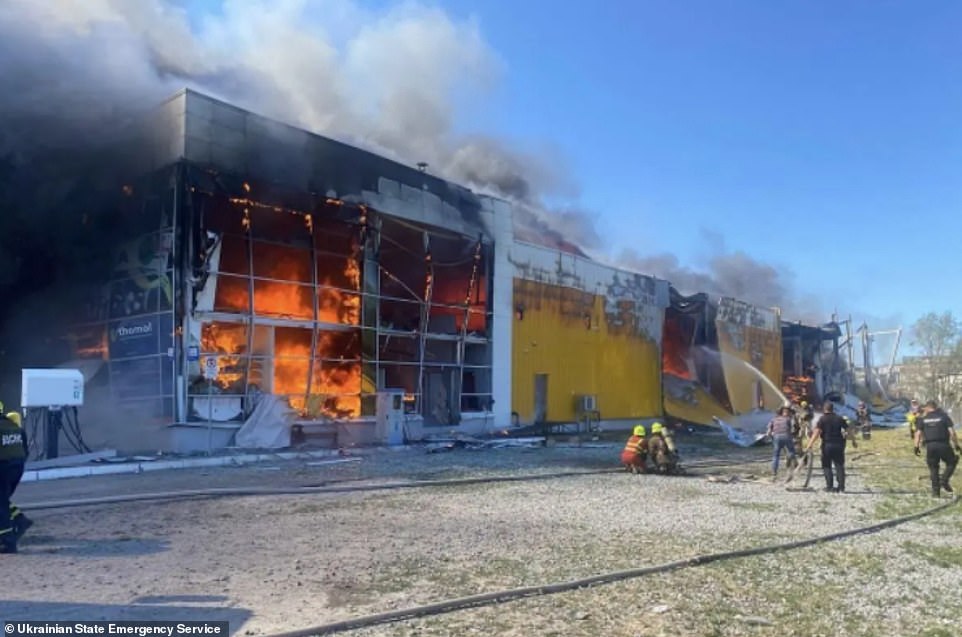 The crowded mall in Kremenchuk had around 1,000 shoppers inside when missiles rained down on the building this afternoon 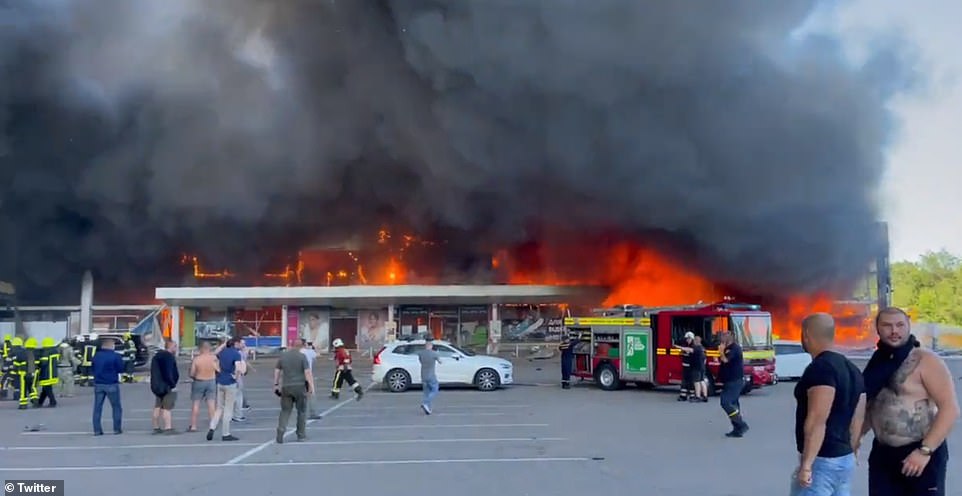 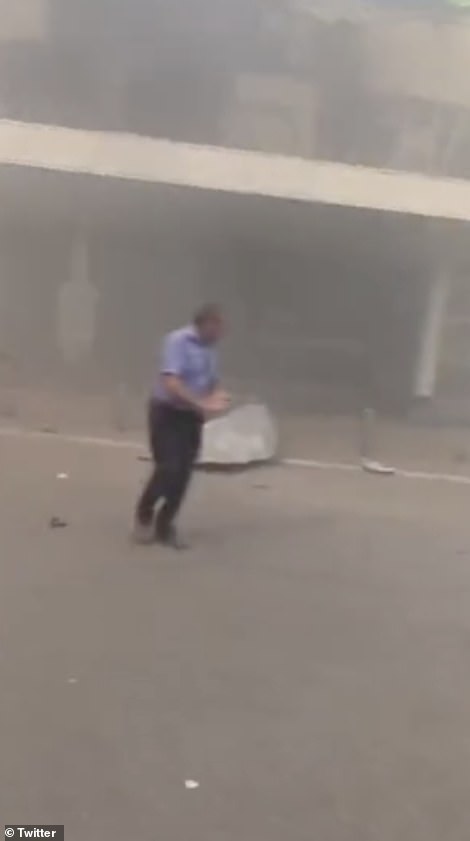 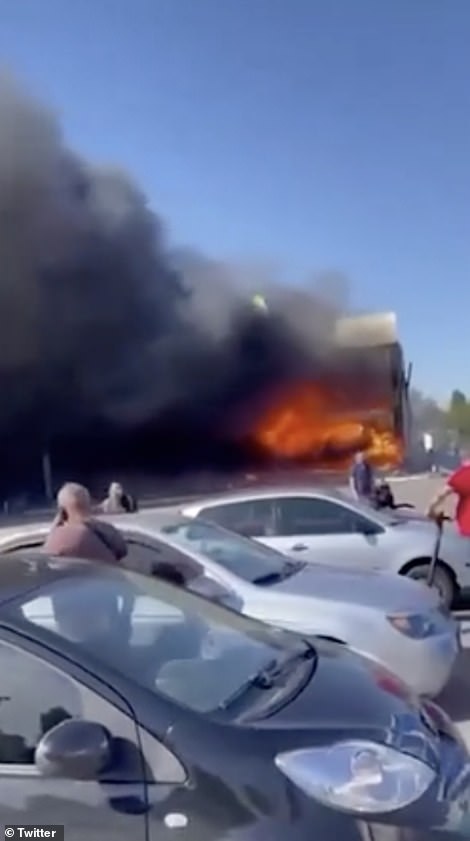 A man is seen running from the burning building after the strike was carried out by Kremlin forces this afternoon, causing a huge fire 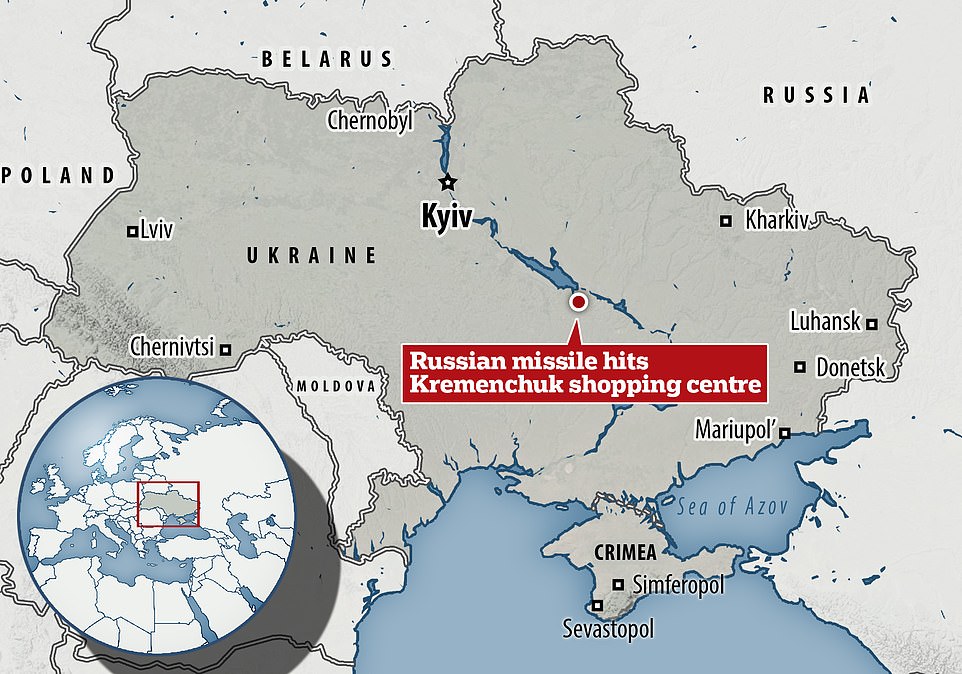 In footage taken from inside the shopping centre, a male voice is heard shouting: ‘Is anyone alive? Anyone alive here?’

A man filming from outside then says: ‘This is it, the walls are collapsing.’

Dmytro Lunin, head of Poltava regional administration, said: ‘Missile strike on a shopping mall with people in Kremenchuk is yet another military crime by the Russians. A crime against humanity. This is an obvious, cynical act of terror against peaceful civilians. Russia is a terrorist state.

‘Rescuers and policemen are working at the site. The number of victims is impossible to count as of now.’

Andrii Yermak, Head of the Ukrainian presidential administration, said: ‘They said they would be hitting centres of decision making.

‘But even the most sick imagination would not have guessed they mean shopping centres by this. 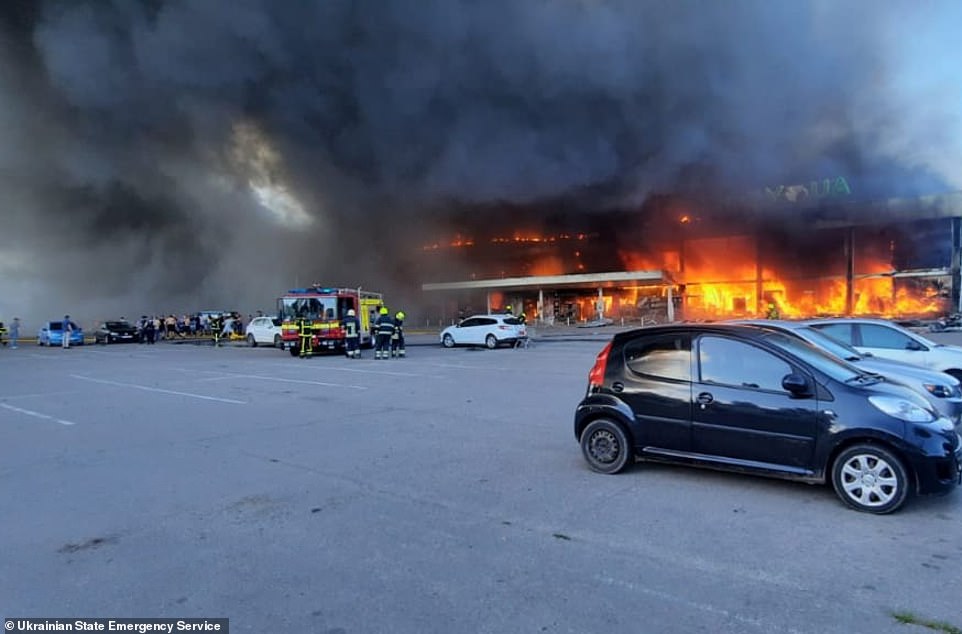 Panicked survivors desperately tried to flee for safety as the complex erupted in fire, with plumes of black smoke billowing into the sky

City mayor Vitaliy Meletskiy said the strike had caused deaths and injuries, but gave no figures.

Kremenchuk is an industrial hub in central Ukraine, situated on the banks of the Dnipro River.

The city, which had a population of 217,000 before Russia’s invasion, is the site of the country’s biggest oil refinery.

Russia has claimed that the carnage was a staged ‘fake’ operation, with TV war reporter Andrey Rudenko claiming: ‘These freaks are back to provocations.

‘The shopping mall in Kremenchuk, with allegedly thousands of people inside it. Videos show an empty car park with just a couple of cars.

‘Was this a working shopping centre, there would have been lots of cars. Were there people inside the centre, and were they to be wounded or killed, then there would be no way these cars would be cleared away.

‘There are no women by the shopping centre, though at this time of day shopping centres are filled with females. Yet we see mainly young men of similar age, and no panic.

‘They are all dressed in shorts, they don’t wear T-shirts. There is a feeling of a crowd of ‘extras’, similar to football fans or something like it.

‘Conclusion: there is a sense they set it up themselves, or shot it for a strong pictures. But they didn’t do it properly, again.’

It is just the latest strike carried out by Vladimir Putin’s forces against defenceless civilians in Ukraine, with hospitals, schools and homes destroyed throughout his savage invasion.

Elsewhere, Russia is continuing to mount an all-out assault on the last Ukrainian stronghold in the eastern Luhansk region, ‘pouring fire’ on the city of Lysychansk from the ground and air, the local governor said today.

It’s part of a stepped-up Russian offensive to wrest the broader Donbas region from Ukrainian government control in what Western experts say has become the new main goal of President Vladimir Putin’s war in Ukraine, now in its fifth month. 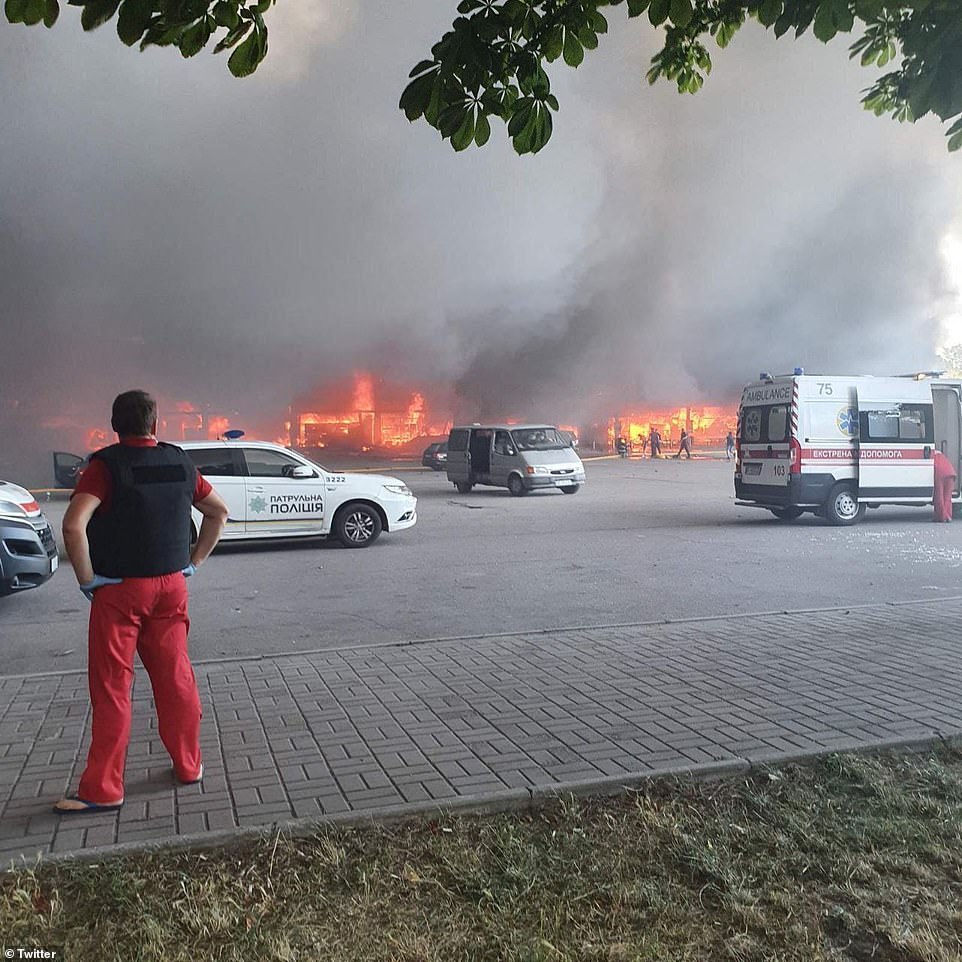 Volodymyr Zelensky said 1,000 civilians were in the crowded mall at the time of the strike, with scores feared dead 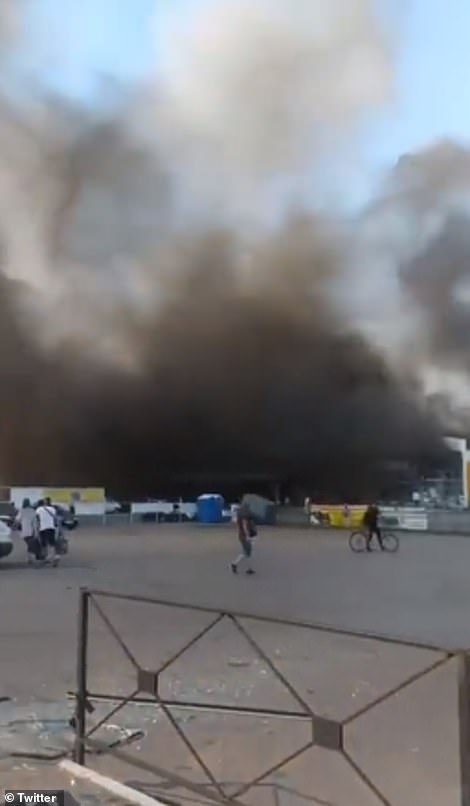 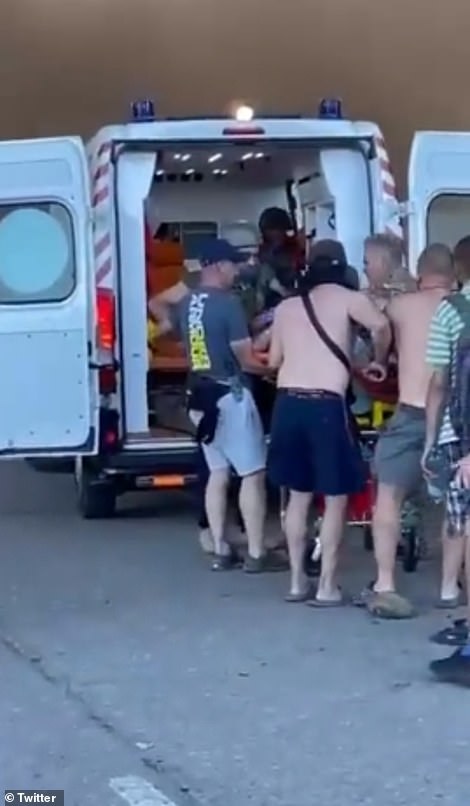 ‘They’re pouring fire on the city both from the air and from the ground. After the takeover of Sevierodonetsk, the enemy army has concentrated all its forces on capturing (our) last stronghold in the Luhansk region: Lysychansk,’ Haidai told The Associated Press.

The Russians were trying to blockade the city from the south, ‘destroying everything that their artillery and multiple rocket launchers can reach,’ Haidai said.

In recent weeks, Russian troops have captured several villages and towns southeast of Lysychansk, and were trying to halt access to the city from the south.

Meanwhile to the west, the mayor of the city of Sloviansk – potentially the next major battleground – said Russian forces fired cluster munitions on the city after dawn, including one that hit a residential neighbourhood.

Authorities say the number of dead and injured are still to be confirmed. The AP saw one fatality: A man’s body lay hunched over a car door frame, his blood pooling onto the ground from scattered chest and head wounds.

Ukraine forces have spent weeks consolidating their defences around Sloviansk out of concern that it could be the next big Russian target if Lysychansk falls. 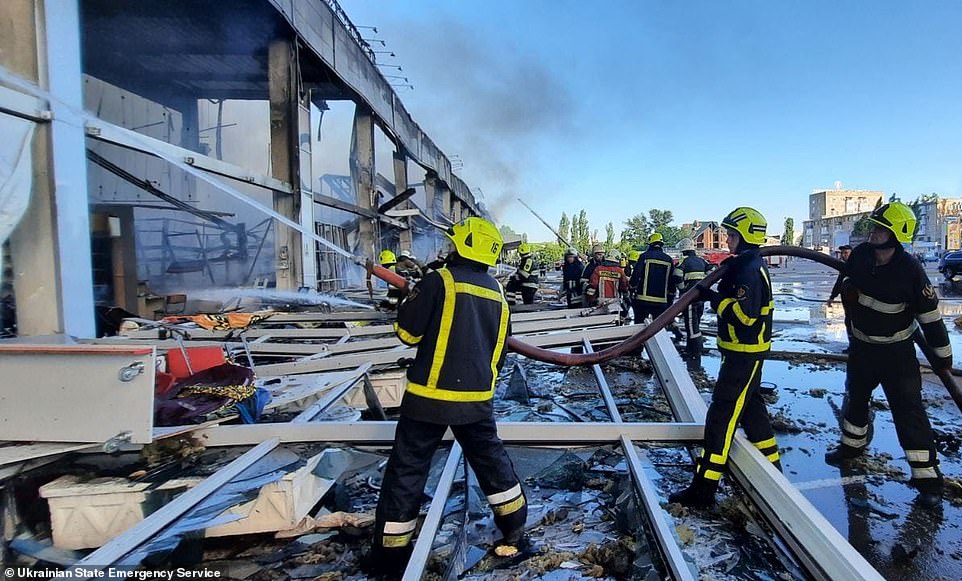 Kremenchuk is an industrial hub in central Ukraine, situated on the banks of the Dnipro River

Zelensky said in a Telegram post that the number of victims was ‘unimaginable,’ citing reports that more than 1,000 civilians were inside at the time of the attack

The shockwave from Monday’s blast blew out most windows in the surrounding apartment blocks and the cars parked below, littering the ground with broken glass.

‘Everything is now destroyed. We are the only people left living in this part of the building. There is no power,’ said local resident Valentina Vitkovska, in tears as she spoke about the blast. ‘I can’t even call to tell others what had happened to us.’

Overall, Zelenskyy office said at least six civilians were killed and 31 others injured as part of intense Russian shelling against various Ukrainian cities over the past 24 hours – including Kyiv and major cities in the country’s south and east.

It said Russian forces fired rockets that killed two people and injured five overnight in and near Kharkiv, Ukraine’s second-largest city, and continued to target the key southern port of Odesa.

A missile attack destroyed residential buildings and injuring six people, including a child, it said.

In Lysychansk, at least five high-rise buildings in the city and the last road bridge were damaged over the past day, Haidai, the governor, said.

A crucial highway linking the city to government-held territory further south was rendered impassable because of shelling.

Such shelling is also making the evacuation of civilians increasingly difficult, Haidai said. The city had a pre-war population of around 100,000, approximately one-tenth of whom remain.

Analysts say that Lysychansk’s location high on the banks of the Siverskiy Donets river, as well as its large area dotted with hills, give a major advantage to the city’s Ukrainian defenders.

‘It’s a very hard nut to crack. The Russians could spend many months and much effort storming Lysychansk,’ said military analyst Oleh Zhdanov.

The Siverskiy Donets river encloses Lysychansk from the north and east, while the Ukrainian army continues to hold territory west of the city, which it uses to supply arms and humanitarian aid.

Tech News Solar Panel Installation: How Long It Takes and What You Need to Know English Headline

Displaced by partition, she visited Pakistan home after 75 years #Breakingnews