MPs are set for one ‘normal’ PMQs before summer recess after Boris Johnson declared freedom day can go ahead on July 19.

Speaker Lindsay Hoyle hailed a return to a ‘buzzing’ House of Commons after the ruling commission agreed that restrictions can lift next week, with masks ‘encouraged’ but not compulsory.

Covid-safe ticks and crosses on the famous green benches will be removed – while the traditional prayer cards will be back in use for reserving seats.

The move – revealed by MailOnline last week – opens the door for a full session of PMQs on July 21 for the first time since the pandemic erupted.

Before then hundreds of MPs would routinely cram into the chamber at noon on Wednesdays, but since last spring just a few dozen have been allowed to attend in person.

Currently the limit is 64 MPs, after microphones were installed in the under galleries of the House to boost participation.

Masks must be worn when members are not speaking, and there is a call list that dictates the order in which people contribute.

In a letter to MPs, Sir Lindsay wrote: ‘We are moving into an exciting new phase where we can finally begin to open up the House of Commons for business. I look forward to seeing the House buzzing again, and to welcoming back so many colleagues who we haven’t seen for many months due to the pandemic.

‘I am grateful – as I am sure all Members of the House will be – for the quick work by the House Service that has made these changes possible in response to the successful vaccination programme.’ 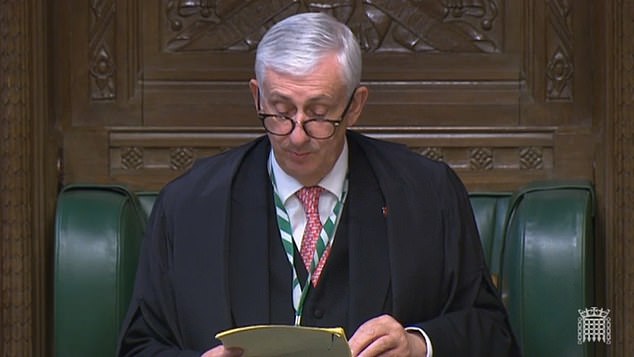 Speaker Lindsay Hoyle hailed a return to a ‘buzzing’ House of Commons after the ruling commission agreed that restrictions can lift next week, with masks ‘encouraged’ but not compulsory 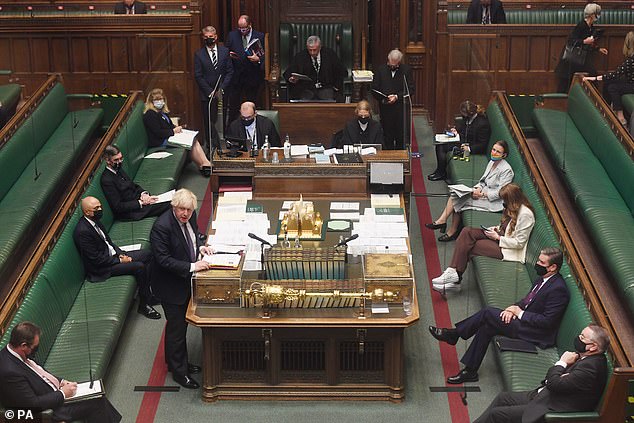 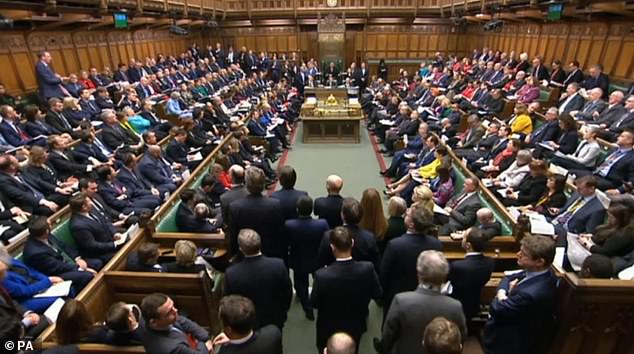 Before the pandemic hundreds of MPs would routinely cram into the chamber for PMQs, but since last Spring just a few dozen have been allowed to attend in person

Boris Johnson has confirmed a ‘big bang’ end to lockdown in England.

Legal requirements for masks and social distancing are set to be ditched from July 19, along with limits on gatherings and mass events.

The temporary procedures that mean MPs can contribute to Commons proceedings via Zoom are not due to expire on July 22.

The ability to vote by proxy will also stay in place for the last few days.

And the call list system will be kept on a bit longer, meaning there will be no ‘bobbing’ to catch the eye of the Speaker until September.

Sir Lindsay is the arbiter of how business is conducted, meaning he has the final say on capacity and whether face coverings are needed.

From September, ‘fully physical proceedings’ will resume and signage and banners will be removed.

However, not everyone was delighted by the news.

‘With just a few days until the summer recess, there is absolutely no reason why this move could not have been delayed for a few months when the health situation would hopefully have improved and everyone would have had the opportunity to receive both doses of the vaccine.

‘MPs may choose not to put themselves at risk in a full chamber, but staff are required to be there and their safety appears to be an afterthought once again.

‘We urge the Commission to rethink this decision, and at the very least act to protect staff by issuing strict guidance, echoing the government’s own new guidance on public transport, that MPs must wear masks in the chamber and set an example to the public about how to behave in crowded indoor spaces.’ 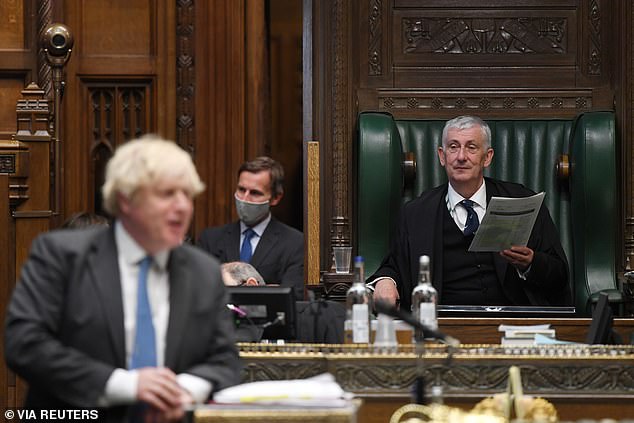 Covid UK: Freedom Day WILL go ahead on Monday… but with caveats #englishheadline #Covid #Freedom #Day #ahead #Monday #caveats