Gervonta Davis seemed annoyed enough by Rolando Romero’s trash-talking to lightly shove him off the stage at their weigh-in.

He hit Romero a lot harder on Saturday night.

Davis regained his knockout power and retained his lightweight title, stopping Romero in the sixth round.

Davis landed a crushing left hand near the corner and Romero fell forward into the ropes. He struggled to his feet but was wobbly the whole way and referee David Fields ended the fight. 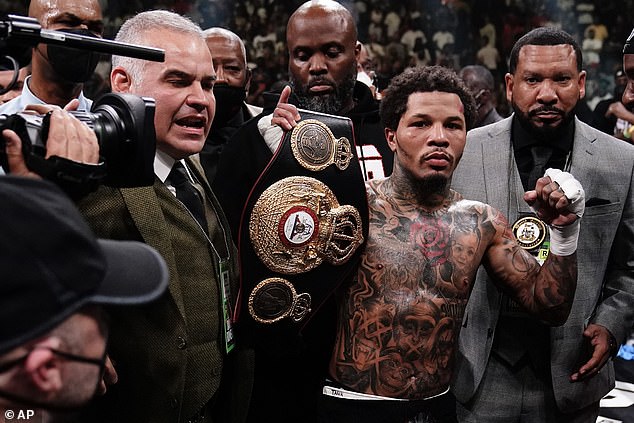 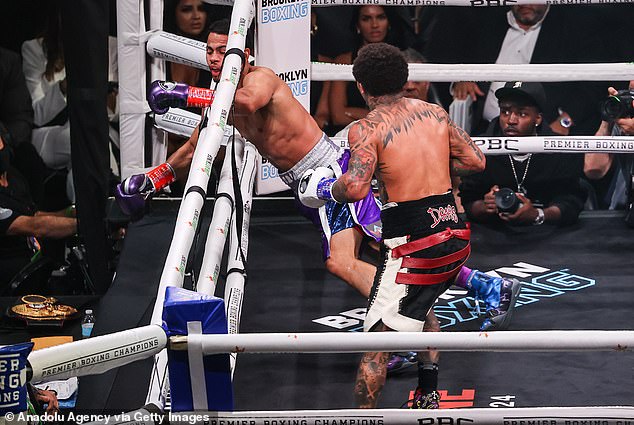 Davis went the full distance in his last win, but dropped Romero in the sixth round in Brooklyn

‘The crazy thing is that I didn’t even throw it that hard. He just ran into it,’ Davis said.

Davis (27-0, 25 KOs) had to go the distance in his last win for only the second time in his career, and Romero said that showed the three-division champion was vulnerable.

If Davis was, it wasn’t for long. He appeared to hurt his left hand on a punch in the fifth round, but there was nothing wrong with it in the next.

Shortly after he left the ring, many fans attempting to leave the Barclays Center ran back in, some even leaping up into the ring in panic due to an unknown commotion near the exit. Security held some fans in one area for a time until the issue was resolved. 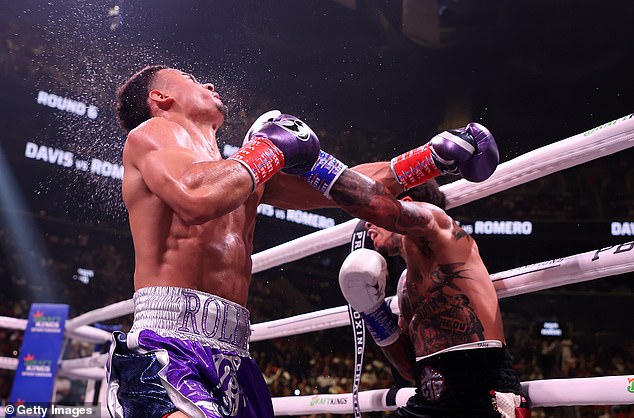 Davis seemed to hurt his hand in the fifth round, but had no issue dropping Romero in the sixth 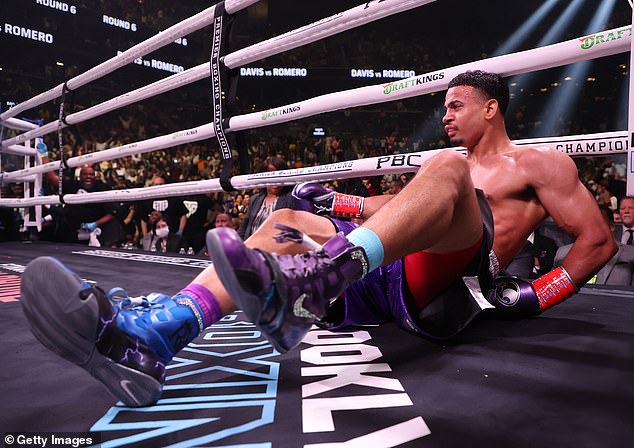 Romero lost for the first time in 15 professional fights, but he wants another one.

‘I won all six rounds,’ Romero said. ‘I won every moment of that fight, I exposed him and we need to run that (fight) back.’

It was an electrifying end to the return of big-time boxing in Brooklyn, where Davis won his first title in 2017.

He drew an arena-record 18,970 for this fight, with the first blockbuster fight at Barclays Center since before the pandemic began two years ago. Madonna and a number of stars from sports were in attendance.

Davis and Romero were supposed to fight in December, but the challenger was taken off the card while a sexual assault claim against him was investigated. Davis went on to beat replacement Isaac Cruz by unanimous decision, after having knocked out every opponent since 2015. 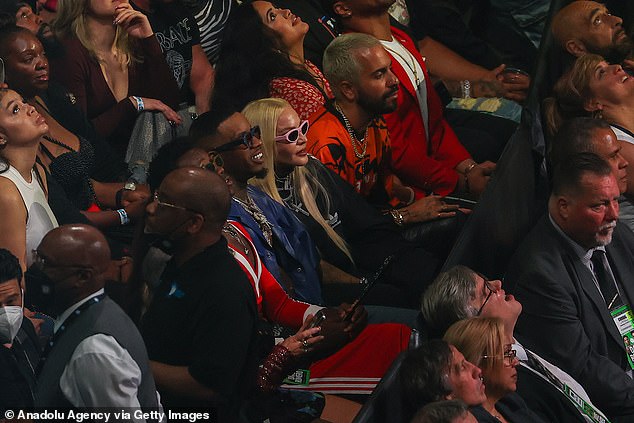 The fight was then rescheduled after no charges were filed against Romero and the buildup featured plenty of trash-talking from the challenger. Davis laughed off most of the talk, until pushing Romero on Friday and learning something about how to handle his opponent.

‘I knew that I could get into his head, just from when we weighed in,’ Davis said.

Romero repeatedly boasted he would knock out Davis in one round, but the only meaningful punches in the first three minutes were landed during a fight in the stands. He did score well with some shots in the second, but then lost a chance to follow up when he shoved Davis to the canvas as they clenched.

The fight was fairly even through four rounds and Davis appeared to be on his way to his most dominant round in the fifth when the Baltimore native suddenly grimaced after appearing to hurt his hand. Whatever the problem was didn’t last very long. 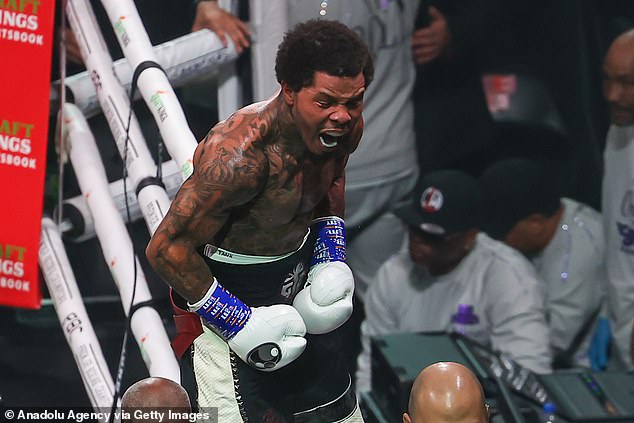 With both fighters promoted by Mayweather Promotions, Romero claimed they were supposed to spar on multiple occasions, but Davis backed out. He finally got his chance less than 10 years after beginning his boxing career, having switched from judo at 17.

He was the No 1 ranked contender but clearly still a long way from Davis’ level.

‘Tank Davis is on another level,’ Mayweather Promotions CEO Leonard Ellerbe said. ‘He showed you why he’s one of the best fighters in the world.’

After walking to the ring while hearing plenty of boos from the pro-Davis crowd, Romero bounced off the ropes and hopped around defiantly. Davis then entered and danced right over to Romero’s corner and stared at him, as if ready to start fighting right then. 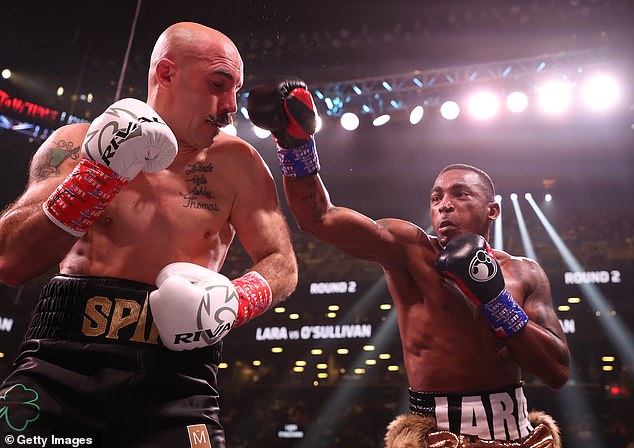 On the undercard, Erislandy Lara (right) stopped Gary O’Sullivan (left) in the eighth round

Once it did start, he needed a few rounds to warm up before figuring out and then finishing Romero.

On the undercard Erislandy Lara, the longtime 154-pound champion who has moved up to 160 and won a title, stopped Gary O’Sullivan 23 seconds into the eighth round. Lara (29-3-3, 17 KOs) landed a hard left and appeared set to finish O’Sullivan in the closing seconds of the seventh before the bell rang.

O’Sullivan was allowed to start the eighth but the Cuban drove him back with another hard left and referee Benjy Esteves waved an end to the fight.