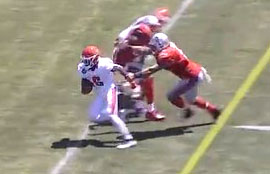 A local football team finally made the playoffs.

The New Jersey Generals became the first team to qualify for a USFL playoff spot after holding on for a 20-13 victory over the Tampa Bay Bandits at Protective Stadium in Birmingham, Ala., on Saturday.

But it wasn’t easy.

New Jersey, which built a 17-3 halftime lead, was outscored 10-3 in the second half. Quarterback Jordan Ta’amu led the Bandits to the Generals’ 12-yard line late in the fourth quarter, but New Jersey’s defense stiffened up to secure the victory.

The Generals (6-1), who are first in the USFL’s North Division, jumped out to a quick 7-0 first-quarter lead as quarterback Luis Perez connected on a 15-yard touchdown pass to KaVontae Turpin. Tampa Bay answered with a Tyler Rausa 34-yard field goal in the second quarter to cut the Generals’ lead to 7-3.

But New Jersey answered right back when Darius Victor rushed for a 6-yard touchdown. After missing a 52-yard field goal, kicker Austin Jones tacked on a 35-yarder to give the Generals a 17-3 halftime lead. Jones later hit a 43-yard field goal in the fourth quarter to close out the scoring for New Jersey.

Perez stepped up in place of starting quarterback De’Andre Johnson who was out with a left ankle injury he suffered in last week’s 26-25 win over the Houston Gamblers. Perez completed 19 of 25 passes for 173 yard s and a touchdown. Victor rushed for 72 yards to go along with his touchdown.

Tampa Bay fell to 3-4 and now sits in third place in the South Division.

The top two teams in each four-team division will advance to the playoffs following the 10-week regular season, which ends on June 19.

The first playoff games will take place on Saturday, June 25, and the championship will be on Sunday, July 3. All playoffs games will be held in Canton, Ohio.