Storm Keating has recalled how she was ‘numb’ from the waist down when she experienced temporary paralysis earlier this year.

The star, 40, who is married to Ronan Keating, explained how she developed a rare condition called Cauda Equina Syndrome that meant her nerves were compressing on her spine so she couldn’t feel anything in the bottom half of her body.

The horrifying experience occurred in March as she underwent surgery after suffering from a prolapsed disc, and Storm recalled how she woke up one morning and found that parts of her body were ‘completely numb’. 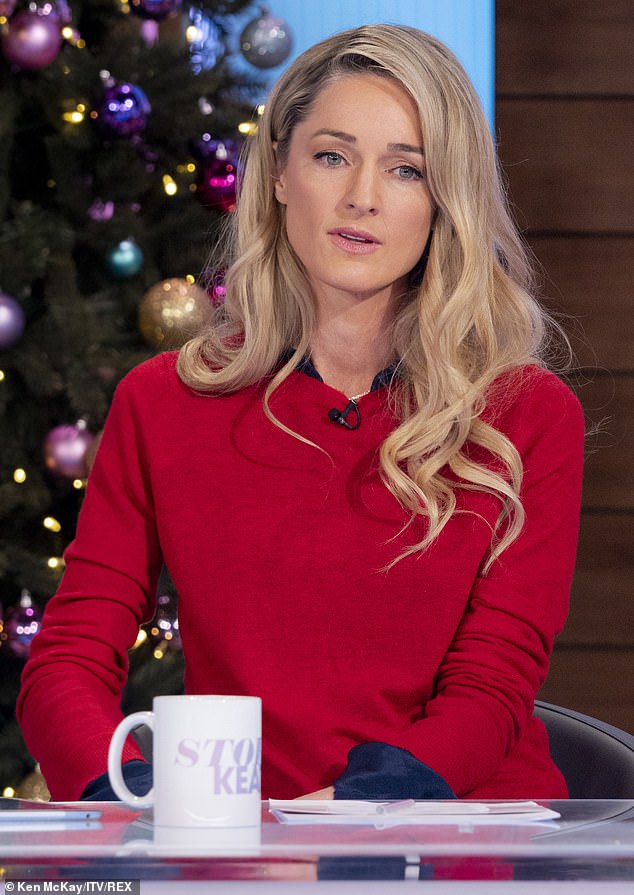 Shock: Storm Keating has recalled how she was ‘numb’ from the waist down when she experienced temporary paralysis earlier this year

Speaking on ITV’s Loose Women on Wednesday, Storm – who shares son Cooper, four, and daughter Coco, 20 months, with the singer – said: ‘It was all gone. My legs, my bowel, my bladder, the lot.’

Coronavirus restrictions meant that Ronan was unable to visit his wife in hospital as Storm recalled how he was left ‘crying in the car’outside during the terrifying ordeal.

She explained: ‘Because of COVID he couldn’t get into the hospital so all he was getting was me on WhatsApp, or me on the end of the phone speaking to the surgeon. 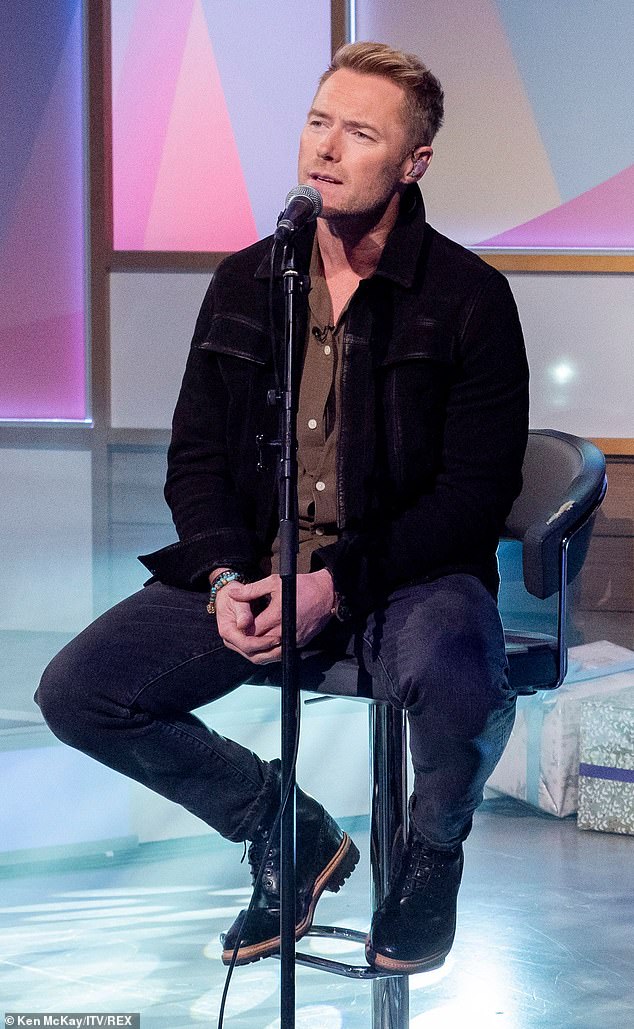 Appearance: The star, 40, is married to Ronan Keating and the couple appeared together on Wednesday’s episode of Loose Women 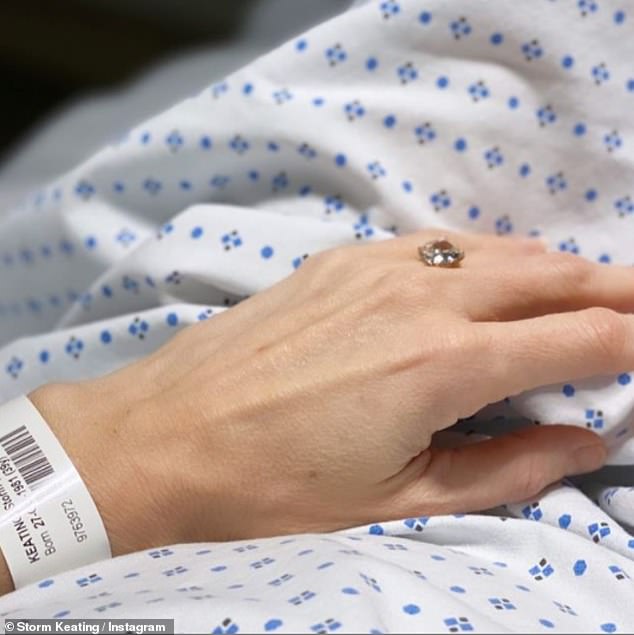 Hospital stay: The horrifying experience occurred in March as she underwent surgery after suffering from a prolapsed disc, and Storm recalled how she woke up one morning and found that parts of her body were ‘completely numb’

Ronan later joined his wife on the Loose Women panel and explained that hearing his wife talk about the incident ‘brought back the same feeling’ that he experienced at the time.

The Life Is a Rollercoaster hitmaker remembered ‘bawling his eyes out’ in the car as he was left ‘not knowing’ what his wife was going through in hospital, while he added that it was the first time he had ever called an ambulance.

Meanwhile, Storm noted that the she can now walk after the successful surgery, and although she feels some numbness in her right leg and foot, she sees that as a ‘very small price to pay’. 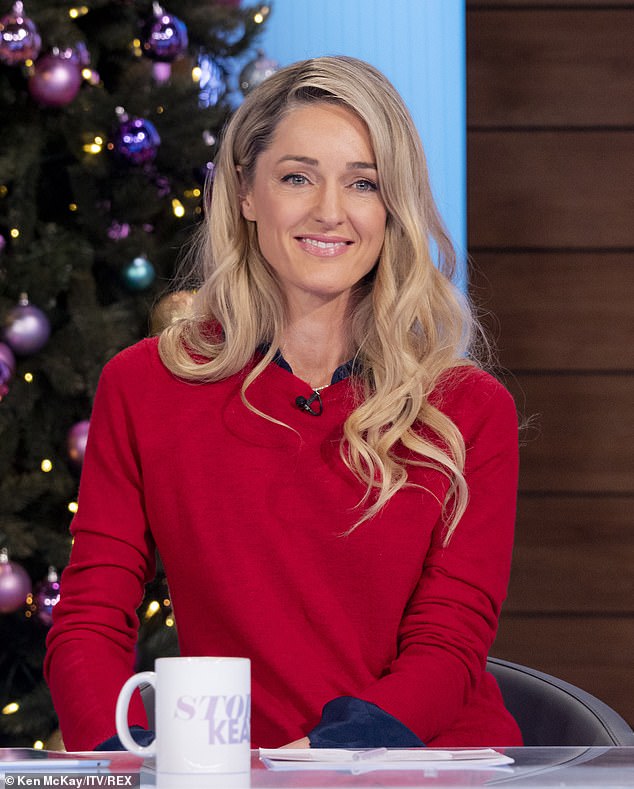 Shock: Speaking on ITV’s Loose Women on Wednesday, Storm – who shares son Cooper, four, and daughter Coco, 20 months, with the singer – said: ‘It was all gone. My legs, my bowel, my bladder, the lot’

Storm announced the news at the time in a lengthy Instagram post, in which she that she ‘wouldn’t wish what I’ve been through on anyone.’

What is cauda equina syndrome?

Cauda equina syndrome is a serious condition where the nerves at the very bottom of the spinal cord become compressed.

They should visit their GP or the accident and emergency (A&E) department of the nearest hospital.

If cauda equina syndrome is not promptly treated, the nerves to the bladder and bowel can become permanently damaged.

Beginning her message, she said: ‘It’s been a long and trialling week, the most frightening week of my life.

‘But I feel so utterly grateful to Dr Syed Aftab and all the amazing specialists, doctors, nurses, physiotherapists and aids at #CromwellHospital who have assisted me through this.

‘On Saturday I was rushed in with what we already knew was a very bad prolapsed disc, which had more recently escalated to the point where it needed surgical intervention.’

Storm gave birth to her daughter, Coco, in March last year and she also shares three-year-old son Cooper with Ronan.

The happy couple met in September 2012 while they were both working on The X Factor Australia.

They tied the knot in a romantic Scottish ceremony in 2015 before announcing in December 2016 that they were expecting their first child.

Detailing how her condition escalated, she continued: ‘Whilst stabilising in hospital however, this then escalated to Cauda Equina Compression/ Syndrome which required emergency spinal surgery to avoid permanent damage.

‘If it wasn’t for Dr Aftab and his acute diligence, care, attentiveness and skills, I would not be walking out of this hospital with the prospects of leading the normal life I had always envisioned I would.’

The condition causes the nerves in the lower back to suddenly become compressed and can lead to loss of sensation, incontinence and paralysis if not treated immediately.

Sharing her gratitude to the medical staff that helped her, Storm continued: ‘There are no words that will ever come close to describing my gratitude to you Syed, thank you.

‘And to Georgia and all the wonderful nurses and healthcare assistants who wiped my tears, comforted my fears, cleaned me up and allowed me to keep my dignity in moments where I thought I would lose it… you are amazing human beings to do what you do, thank you.’ 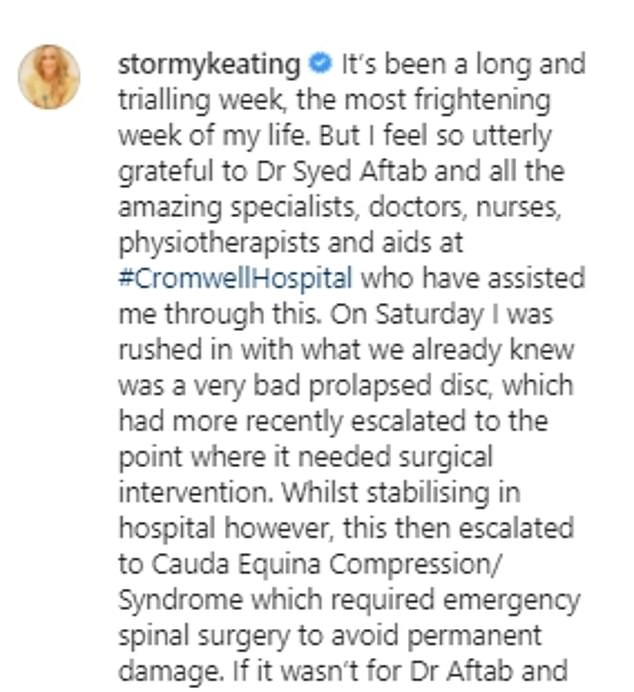 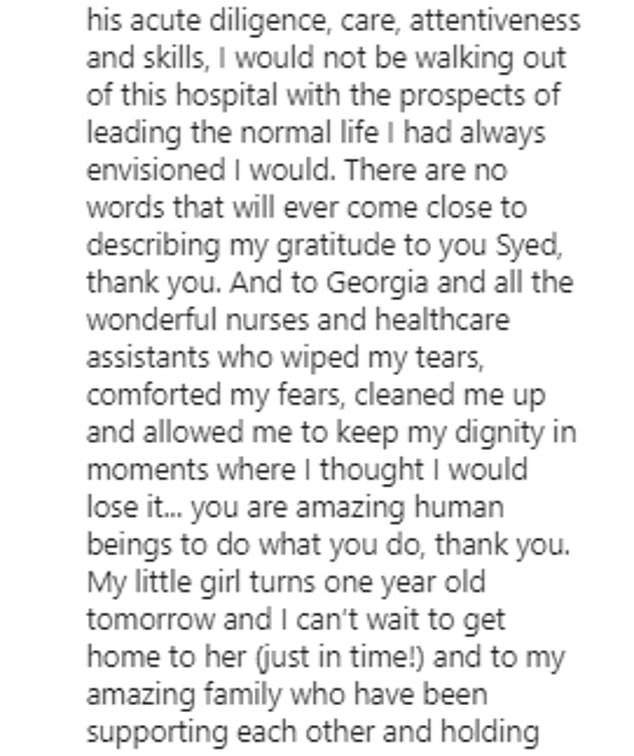 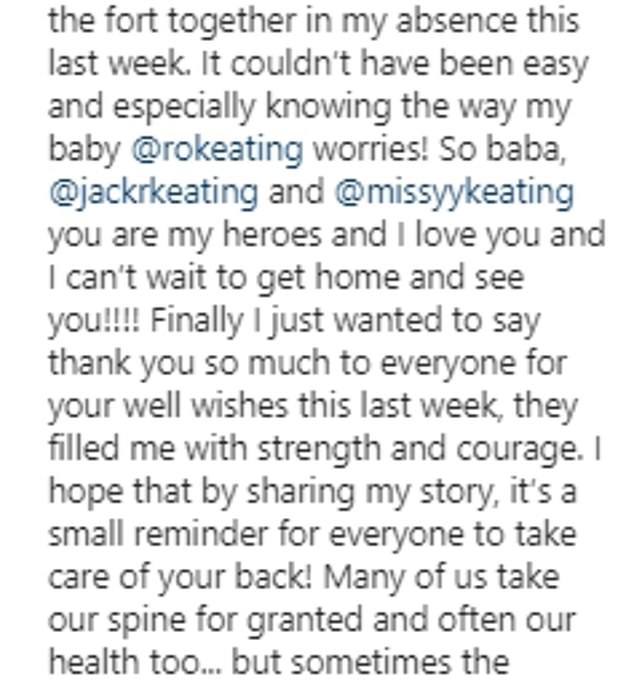 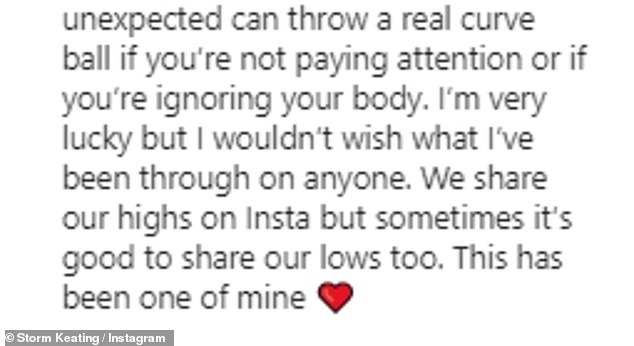 Ordeal: In a lengthy Instagram post, the mother-of-two told how it had been ‘most frightening week of my life’ and added that she ‘wouldn’t wish what I’ve been through on anyone

Turning to her family, she said: ‘My little girl turns one year old tomorrow and I can’t wait to get home to her (just in time!) and to my amazing family who have been supporting each other and holding the fort together in my absence this last week.

‘It couldn’t have been easy and especially knowing the way my baby @rokeating worries! So baba, @jackrkeating and @missyykeating you are my heroes and I love you and I can’t wait to get home and see you!!!!’

The Australian fashion designer concluding her post, writing: ‘Finally I just wanted to say thank you so much to everyone for your well wishes this last week, they filled me with strength and courage. I hope that by sharing my story, it’s a small reminder for everyone to take care of your back!

‘Many of us take our spine for granted and often our health too… but sometimes the unexpected can throw a real curve ball if you’re not paying attention or if you’re ignoring your body.

‘I’m very lucky but I wouldn’t wish what I’ve been through on anyone. We share our highs on Insta but sometimes it’s good to share our lows too. This has been one of mine ❤️.’ 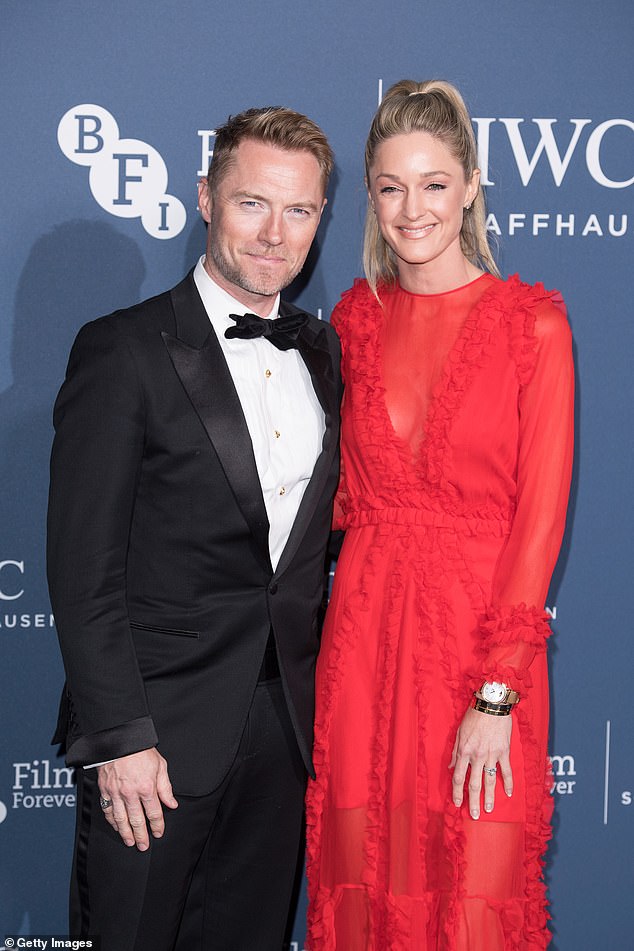 Shock: Storm told how she had initially been rushed to hospital for a ‘very bad prolapsed disc’, which needed ‘surgical intervention’, with things taking an even more serious turn when it escalated to cauda equina syndrome (pictured with Ronan in 2018)

Celebrity Lamar Odom reveals which of his famous exes he would like to date...