Kendall Roy (Jeremy Strong) celebrates his 40th birthday with an all-out bash in the seventh episode of Succession Season 3.

The proverbial black sheep of the Roy family is seen holding a mic in the promo for Sunday night’s episode, entitled Too Much Birthday, which may hint that he may deliver another iconic rapping performance, like he did in Season 2 at a celebration of his father, Logan Roy (Brian Cox). 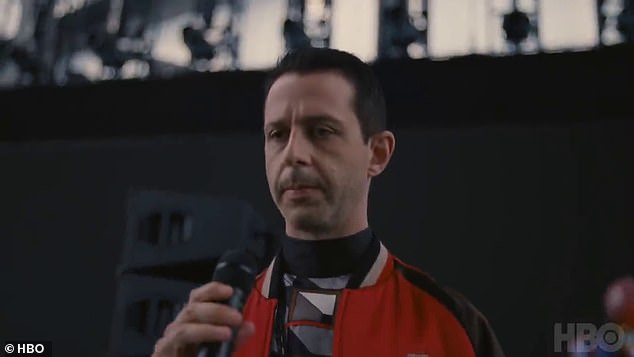 Black sheep: The proverbial black sheep of the Roy family is seen holding a mic in the promo for Sunday night’s episode, entitled Too Much Birthday, which may hint that he may deliver another iconic rapping performance, like he did in Season 2 at a celebration of his father, Logan Roy (Brian Cox) 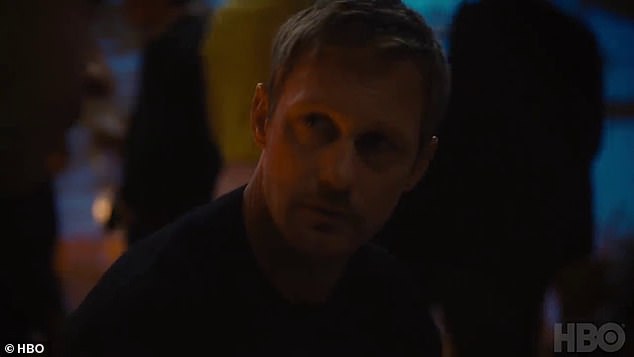 The episode begins with Kendall on stage with a mic, rehearsing his song for the party, a cover version of Billy Joel’s Honesty.

He looks to his new girlfriend Naomi Pierce (Annabelle Dexter-Jones) as she says the rehearsal sounds good.

The episode continues with Roman (Kieran Culkin), Shiv (Sarah Snook) and Tom (Matthew McFadyen) all talking business before they talk about their brother’s birthday party.

Roman says he might have to go to see how ‘bad’ it’s going to be, but Shiv doesn’t think she will go.

They go into the conference room where they’re handing out champagne, but they aren’t exactly celebrating.

The Department of Justice is happy but they think Kendall ‘overpromised’ and they just think they’ll get a fine.

Tom is relieved when it seems he won’t be going to jail, as they all toast to their success.

Logan walks by Tom and says, ‘I’ll remember,’ meaning he’ll remember his offer to be the proverbial ‘fall guy’ and go to prison for this whole scenario.

Tom goes into Greg’s office and is visibly relieved, before he freaks out and flips over Greg’s desk, screaming in celebration.

Greg is terrified, wondering what is going on, as Tom says, ‘Apologies, Greg, I seem to have gotten carried away.’

He tells Greg that they’re home free, as Greg asks if it’s real, and Tom kisses his forehead.

Tom leaves the office as Greg says ‘Good news,’ before trying to pick up his desk and clean up his office.

Kendall is talking to his team, where he’s told that 80% of his A-list guests are yes, but his father Logan is a no.

When asked about his siblings,  she doesn’t answer, but Kendall wants everyone to have a good time and there are ‘no boundaries if you’re cool,’ adding he wants the staff to ‘get their drink on’ too.

Tom walks back into Logan’s office, and Logan is pissed that an executive sent some subordinates, and he’s pissed that he’s going to Kendall’s party.

Logan tells them that they’re going after Pierce again, who won’t let the deal happen.

Shiv thinks this deal gets them into sports, betting, social media and more, but Logan doesn’t want to talk to Matsson.

They agree to go to the party to court Matsson, and Logan gives Roman a card to give to Kendall while he’s there.

That night at the party, Tom and Shiv arrive, as Tom is feeling great, telling Shiv he wants to get ‘f**ed up.’

Tom runs into Greg who are both happy they aren’t going to jail, as Greg asks him about one of Kendall’s PR people, but Tom says Greg is out of her league.

Greg is not happy and says Shiv is out of his league, asking how he got her, as Tom responds that he has a d**k the size of a sequoia.’

Shiv and Roman ask where Kendall is and they go see him in the VIP section.

Roman says he’s only there because he thinks it will be an epic catastrophe.

Shiv asks who is there, but Kendall says, ‘Who isn’t there?’ as they say his wife, kids and mother aren’t there.

Kendall takes them into the bowels of the VIP section including a room filled with fake news headlines about the family.

Connor isn’t happy about the fake headline about him ‘s****ing his bag’ but Kendall agrees to take it down.

Kendall leaves to go ‘circulate’ but says he’s  happy they’re all there and leaves.

He opens the card from his dad , which only reads ‘Cash out and f**k off,’ along with an offer sheet inside the card.

Kendall seems to be mildly amused, just saying ‘Wow’ before walking away, as Greg finds the PR woman he has a crush on.

She says she’s targeting him for the press but she’ll be fair, but he tries poorly to flirt with her and she walks away.

Kendall tells Naomi that his dad offered to buy him out, saying it would  be about $2 billion if he takes the payout.

He thinks it’s a ‘mindf**k,’ but she thinks maybe he should take it, and he says maybe he could buy a bunch of newspapers running pictures of his dad eating dog d**k.’

The PR woman tells Kendall that Shiv and Roman that they’re setting up a meeting with Matsson, but Kendall won’t let his siblings into an area of the party called the ‘treehouse.’

Kendall says he needs to be discreet because there are a lot of celebrities and it wouldn’t look good to have them there.

Kendall knows they’re there to see Matsson, but he won’t let them be in the treehouse.

As a parting shot, Kendall says he appreciates the ‘mindf**k’ from dad, but Shiv had no idea that was happening.

Kendall goes to see Matsson who isn’t happy about anything, as Kendall says his siblings are looking for him.

Kendall meets up with his ex, who asks if he got the gift from their kids, who said they made something for him, but he didn’t get him.

Kendall says he might be getting out of the firm, but she takes a shot about guys  from the firm following them.

Kendall is walking around with his PR people as she wants them to get Connor to lose his coat, as he runs into Greg.

‘You’re like the world’s biggest f***ing parasite,’ Kendall tells Greg with a laugh, and adds, ‘I’m kidding, or am I?’ before walking away.

Tom and Shiv are hanging by the bar, and Shiv is still pissed about Roman and Logan teaming up with the buyout for Kendall.

The PR girl asks Connor for his coat, offering a complimentary sweater, but Connor doesn’t want to take his coat off.

Roman finally makes his way into the clubhouse as he makes his way to Matsson, who says he just wants to find some good  p***y  and get out.

Roman says his dad was grumpy this morning, and wants to know if Matsson was trying to humiliate him.

Matsson says he does have one question, ‘When will your father die? I don’t want to be rude, but what kind of shape is he in?’

He asks if he’s gonna die in one year or five years, adding he doesn’t like the idea of a ‘man hanging over me.’

‘It’s not my world, media, so his death would clear a space, with due respect,’ Matsson said.

Roman says there is another way, asking if there was a way that he would never have to talk to Logan.

Roman will be his main contact and he’ll never have to talk to Logan.

They go into the bathroom to ‘piss’ on his streaming app and asks if he’d be interested in selling.

Matsson is done pissing and the app is still loading as they flip  off the app sitting in the urinal.

Kendall is backstage preparing to go on stage, when he backs out of singing, but they ask about the tiny Wu Tang, but he pulls them too.

Shiv is back at the bar, downing drinks, before getting out on the dance floor.

Greg runs into the PR girl, who tells her how Kendall wants to ‘rescue the vibe’ of the party.

‘Maybe when you’re not working for him anymore and trying to destroy my reputation,’ he says… but she talks about how Kendall wanted 80s lunchboxes before backing out of that too.

‘So if you want to ask me out, ask me out,’ she says, as he asks her out and she says yes.

Kendall goes backstage looking for his kid’s gift with his girlfriend Naomi, who insistss it will ‘turn up.’

Kendall starts frantically digging through all the gifts as Naomi shows him her gift, which calms him down.

He opens it and finds it’s a watch, but she says she’s ‘really bad at presents,’ but he insists it’s fine.

He says he doesn’t want to be a dick but he has a watch, and he’s  trying to get inside her head and try to figure out why she’d give him that gift.

He goes back to looking for the kid’s present, kind of freaking out a bit, when Naomi tries to calm him down.

‘This is so pathetic. I wish I was…’ Kendall says, before having some sort of a breakdown, adding, ‘I wish I was home.’

Greg asks Tom if he’s OK, saying he hasn’t smiled in like six hours, as they go through the ‘compliment tunnel,’  where random people give them compliments.

One guy says Tom is ‘full of grace’ but Tom freaks out and asks why he would say that as Greg tries to intervene.

Tom says he took the wrong drugs in the wrong order and he’s not happy and he’s mad that Greg is happy.

Shiv asks Roman if he’s spoken to Matsson, and Roman won’t tell her what happen, saying he’ll run it by dad.

They get into a little sibling argument, with Kendall walking by and saying that neither of them should be in there.

Roman says that he already talked to Matsson as Kendall wants them to be kicked out.

Kendall tells Roman he’s not a real person, as Roman dares him to hit him, but Kendall won’t, and when he won’t do it, Roman pushes Kendall and he takes a fall.

Kendall gets helped up by Naomi as he gets up, entirely embarrassed, telling Connor to take his coat off.

Roman calls his father to tell him the good news, telling his driver he will walk home.

Kendall is  back home, wrapped up in a blanket, as he says the party is over, as Naomi says it’s just a party, and let it fizzle.

He goes down to lay on Naomi’s lap, as she lets out an exasperated sigh as the episode comes to an end.

The preview for next week’s penultimate episode teases the children’s mother’s wedding, ass they finalize the acquisition of GoJo.

Kendall is seen at the wedding, with a freshly shaved head, saying he wants to talk to his father. 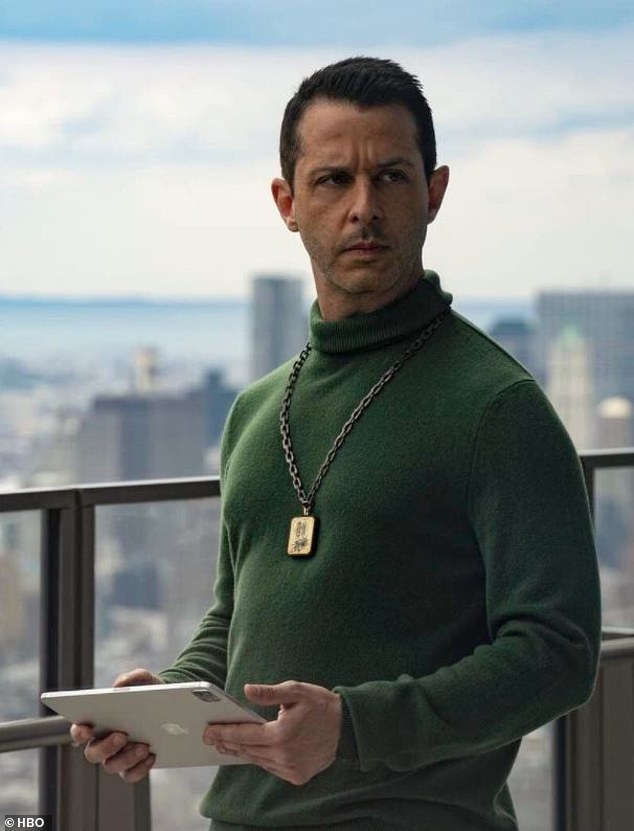 Bombshell: This new season will find Logan trying to secure familial and political allies in the aftermath of Kendall’s bombshell announcement 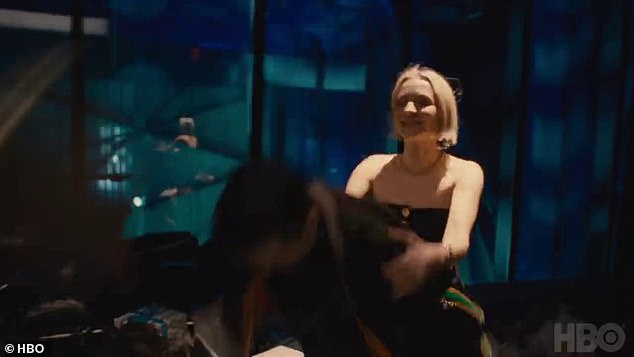 New characters: There will also be a few new characters thrown into the mix this season, played by Adrien Brody, Alexander Skarsgard and Hope Davis 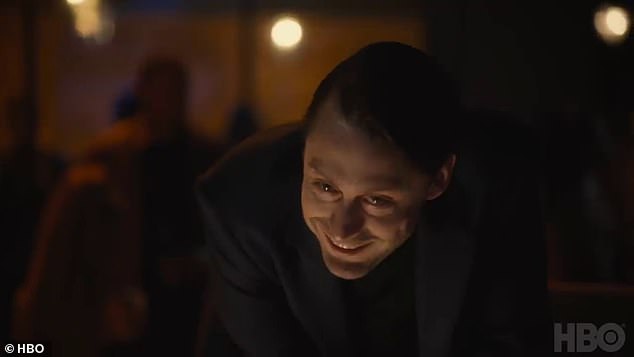