The owner of a popular burger store has been forced to apologise after a ‘racist’ Facebook post sparked widespread outrage.

Downtown Brooklyn Penrith, in western Sydney, took to its social media accounts after Australia Day to promote one of its American-style burgers.

But the post was interpreted as ‘racist’ by some after Invasion Day protesters were described as ‘bandwagoners’.

‘Three great things about today!’ the restaurant wrote on January 27.

‘One of our fans grabbed a Fairy Bread Burger and trekked into the city to grab this shot. 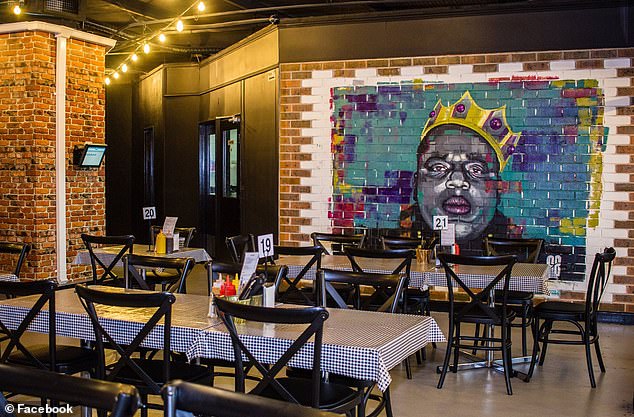 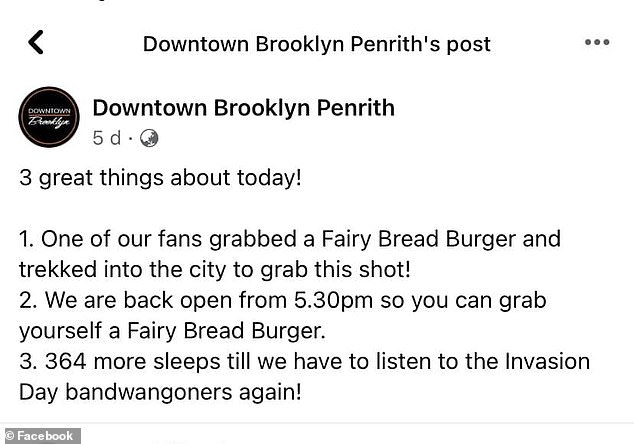 ‘We are back open from 5.30pm so you can grab yourself a Fairy Bread Burger.’

‘[And] 364 more sleeps till we have to listen to the Invasion Day bandwagoners again!’

Australia Day is called ‘Invasion Day’ by those who argue the January 26 national public holiday is offensive to indigenous people as it marks the arrival of Britain’s First Fleet and the start of European settlement.

Social media users were particularly incensed by the term ‘bandwagoners’ with some vowing to boycott the restaurant.

‘Probably about 10 days until you go out of business, so you don’t even need to worry about waiting the full 360 days,’ another added.

‘Thanks for letting me know where not to spend my money,’ a third commented. 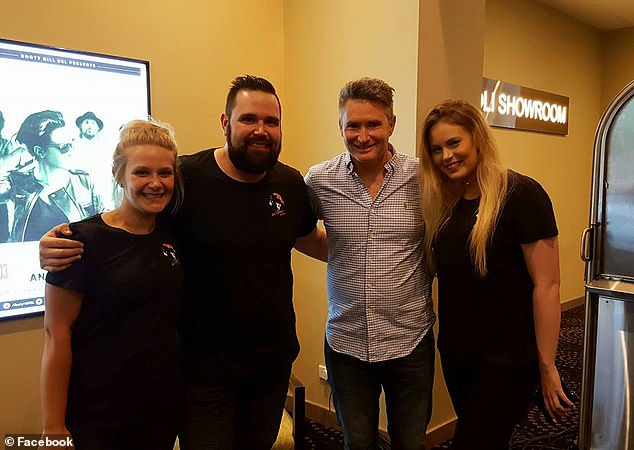 Downtown Brooklyn BurgersOwner Chris O’Shea ( pictured 2nd from left, with co-owner Nyome O’Shea, left, and Dave Huges, second from the right) has since issued an apology admitting the post ‘may have pushed the boundaries too far’

Former Labor MP Emma Husar also weighed in, saying the store’s attitude ‘towards your own community that you profit from sucks’.

‘Well, this level of racism is disappointing [and] also stupid,’ she said.

‘Western Sydney is home to the largest numbers of First Nations people in a metro setting.’

Downtown Brooklyn’s owner Chris O’Shea issued an apology in response to the backlash, admitting the post ‘may have pushed the boundaries a bit too far’.

‘The point #3 was made in regards to social influencers and how they love to jump on bandwagons,’ he wrote in a post online.

‘They use these days to support an issue for the likes or clout, then move on to the next one, forgetting about the true cause. 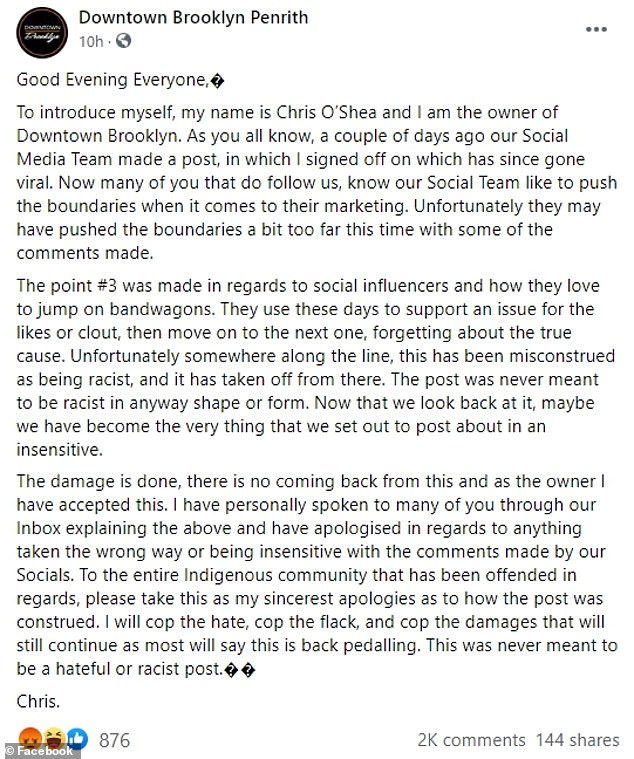 The apology (pictured) drew a mixed response, with many labelling it as ‘backtracking’

‘Unfortunately somewhere along the line, this has been misconstrued as being racist, and it has taken off from there.’

Mr O’Shea said he would ‘cop the hate’ and said it was ‘never meant to be a hateful or racist post’.

The apology has received mixed reviews, with many labelling the post as ‘backtracking’.

‘Nice try but… no, not buying your backtracking. A lot of Aboriginal people and allies and other people of colour and just decent people live in Penrith. You will feel the impact of this,’ one person wrote.

‘Here’s a tip: Apologising and owning your actions is very different to patronising people by, apologising for the way they ‘perceived’ your thinly veiled hatred fuelled posts and comments. Which is what you have done here,’ another comment read.