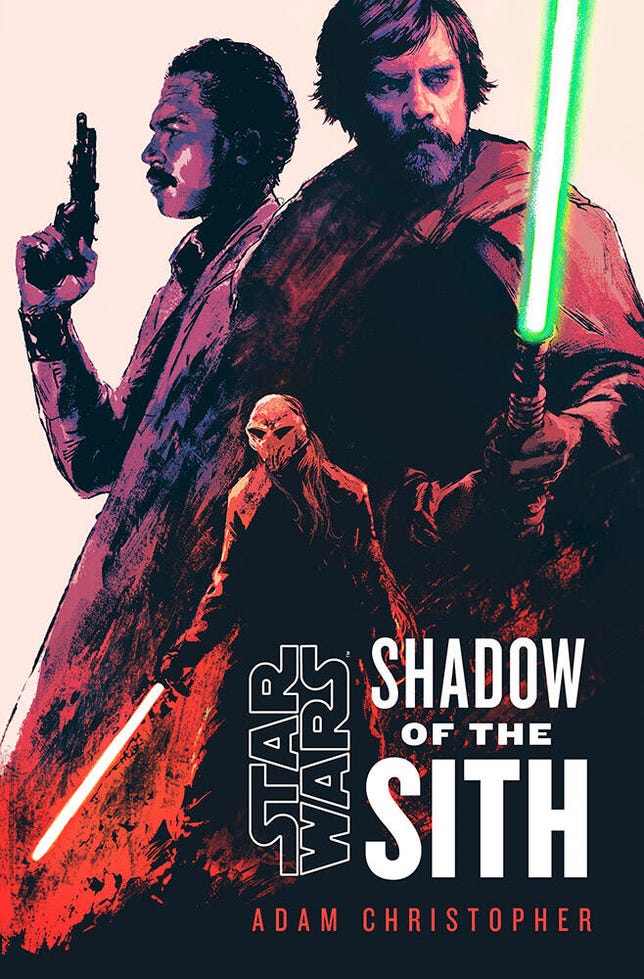 Cast your mind back, if you will, to the joyous era of Star Wars fandom that followed sequel trilogy opener The Force Awakens‘ 2015 release. It felt like everyone was dying to know who mysterious hero Rey’s parents where and what Luke Skywalker had been up to in the decades since the Original Trilogy.

Star Wars suddenly mattered again; the excitement was glorious and the storytelling possibilities seemed endless. The Last Jedi and The Rise of Skywalker (the second and third movies in the sequel trilogy) answered some of the mysteries with varying degrees of success, but didn’t dive quite as deeply as many fans would’ve liked.

Adam Christopher’s novel Star Wars: Shadow of the Sith, which hits shelves June 28, is the deep dive I’ve wanted since 2015. Taking place 17 years after Return of the Jedi (and 13 years prior to The Force Awakens), we’re introduced to Rey’s parents as they flee across the galaxy with their young daughter. The couple were seen briefly in a flashback in The Rise of Skywalker, but this is their first major appearance. Their names are revealed almost immediately, but we won’t spoil their names in this review since Christopher builds up to them beautifully.

Unable to trust anyone with the agents of the resurrected Emperor Palpatine hot on their trail, the trio’s situation feels desperate. Given the glimpses we got of Rey’s parents in The Rise of Skywalker, this plot thread has a sense of dark inevitability. That doesn’t stop Christopher from infusing these characters with emotional depth; you’ll find yourself wholly invested in their quest for safe haven despite knowing how it ends.

The family has a glimmer of hope in Luke Skywalker, whose efforts to train the next generation of Jedi Knights are hampered by his visions of a sinister presence at the edge of the galaxy. This novel presents the Original Trilogy hero in his glorious prime — exactly how many fans wanted him to appear in the sequels — but Christopher deftly drops hints of the emotional state he’s reached by the time of The Last Jedi.

He’s joined by fellow classic hero Lando Calrissian, who’s in bad shape due to his stalled search for his kidnapped daughter. This vulnerable state allows Christopher to explore the smooth gambler’s inner life to an unprecedented degree; it draws from the cocky young man seen in prequel spinoff Solo, the self-assured hustler of the Original Trilogy and the haunted older warrior we met in The Rise of Skywalker.

Luke and Lando’s mission to save Rey’s family is complicated by nasty assassin Ochi of Bestoon (another character who made a blink-and-you’ll-miss-it appearance in The Rise of Skywalker), who’s been tasked by members of a Sith cult with hunting down the parents and child. He’s a loathsome but compelling presence and grows increasingly unhinged as the tale progresses.

Rounding out the villainous side is a mysterious warrior empowered by the dark side of the Force. This side of the story leans into creepy arcane Sith lore and proves to be the novel’s most fascinating element. It gets surprisingly dark and weird, and hopefully hints at avenues that Star Wars will explore in future.

Once our heroes and villains cross paths, Christopher’s cinematic writing shines in some epic action sequences that will delight those wanting to see the extent of Luke’s power. The author sets him up with a worthy adversary, and it’s fun to see the threat escalate to a level reminiscent of the old Legends continuity stories.

However, at 496 pages, Shadow of the Sith loses steam a few times. An extended sequence on a mining space station comes to an epic conclusion, but there’s a little too much jumping between characters and wandering around before getting to it.

One extended cameo from a baddy seen in The Rise of Skywalker also feels extraneous to the main narrative thrust even if they’re fun to spend time with. Thankfully, the other cameos are better judged, fitting nicely into the story and staying exactly as long as they’re needed.

Despite these minor issues, Adam Christopher’s Shadow of the Sith is the best kind of Star Wars novel and acts as an essential link between Return of the Jedi and The Force Awakens. It explores ambiguous aspects of the movies cleverly, tying up loose ends and adding emotional resonance while opening up a bunch of exciting new storytelling possibilities. After more than half a decade, the mystery of Rey’s parents is solved in style.

Tech News 50 of the Absolute Best TV Shows to Watch on Netflix English...