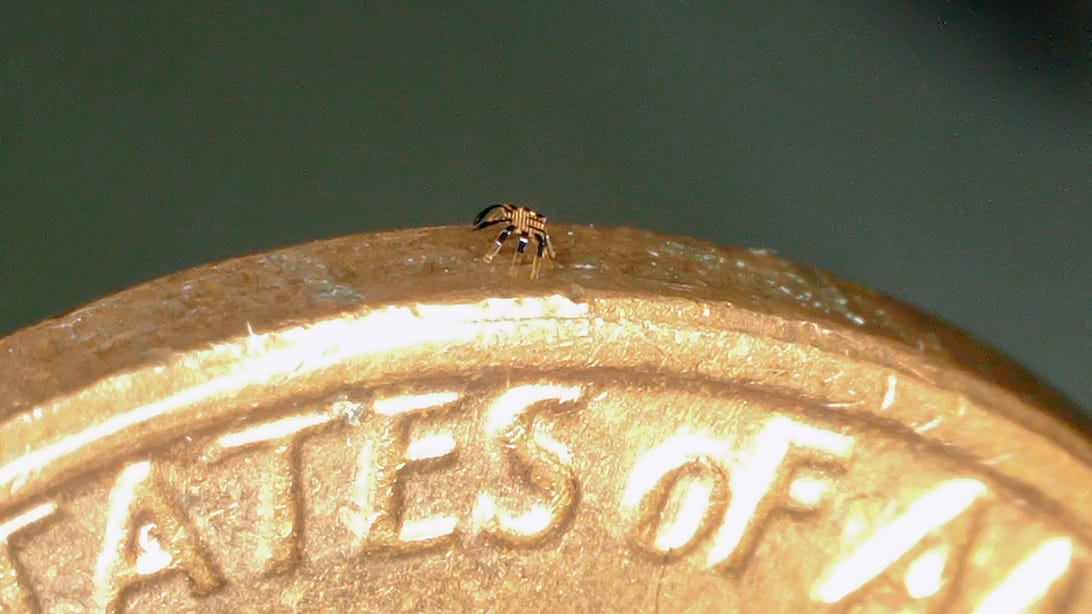 Northwestern University researchers announced on Wednesday their quite adorable prototype of a crab-shaped mini-robot. It can run. It can jump. It’s tiny enough to fit inside the “o” in this sentence.

And it’s record-breaking. The team calls it the smallest remote-controlled walking robot ever constructed.

This crawly critter is much more than cute, though. It’s poised to seriously level-up endeavors like helping build other devices by traveling into tight, hard-to-reach spaces. Plus, because it’s entire less-than-a-millimeter robot body doesn’t need wires or electricity to operate, it could even roam the human body one day, acting like some sort of dextrous, six-legged medical assistant.

“You might imagine micro-robots as agents to repair or assemble small structures or machines in industry or as surgical assistants to clear clogged arteries, to stop internal bleeding or to eliminate cancerous tumors — all in minimally invasive procedures,” John A. Rogers, a professor of materials science and engineering at Northwestern University, said in a statement. He’s also the co-author of the paper published Wednesday in the journal Science Robotics.

And per the study, Rogers and his team aren’t tethered to the idea of a purely crab-bot artery-exploring army. They also built similar remote-controlled creatures in the shapes of crickets, beetles and inchworms. Only time will tell what the next generation of teeny-tiny worker droids will look like.

“With these assembly techniques and materials concepts, we can build walking robots with almost any sizes or 3D shapes,” Rogers said. “But the students felt inspired and amused by the sideways crawling motions of tiny crabs. It was a creative whim.”

Such a creative outlook, however, was arguably the key to the team’s success in making these animal-inspired devices move around sans electricity. Basically, each robot is made of what’s called a “shape-memory alloy,” or an elastic material that can exhibit two different states. When heated, the alloy transforms to a shape predetermined by the team. This is the “remembered” shape. When cooled, it returns to its original, sort of deformed shape.

“Because these structures are so tiny, the rate of cooling is very fast,” Rogers said. “In fact, reducing the sizes of these robots allows them to run faster.”

You can see all of this in action in the video below.

Manufacturing these robots with the special alloy was almost as whimsical as the mere notion of sweet little crab workers toiling away at our compact electronics.

“Our technology enables a variety of controlled motion modalities and can walk with an average speed of half its body length per second,” Yonggang Huang, a professor of mechanical engineering at Northwestern University and co-author of the study, said in a statement. “This is very challenging to achieve at such small scales for terrestrial robots.”

Based on a technique Rogers and Huang coined eight years ago, the duo used something like a pop-up-book type of mechanism. Each crab droid was first built in a flat geometry, bonded to a stretchy substrate, then that substrate was sort of contracted until it pulled the crabs inward, into their final 3D form — yet another reason why robotic development is so, well, cool.

“Robotics is an exciting field of research,” Rogers said. “And the development of micro-scale robots is a fun topic for academic exploration.”