A 17th century pub called ‘The Black Bitch’ is set to change its name after Greene King opted for an ‘anti-racist’ rebrand amid fears its title was not ‘welcoming and inclusive’.

The 350-year-old boozer in Linlithgow, West Lothian in Scotland, operates under the popular British brand and is set for a dramatic makeover after the chain feared offended customers would be put off by any racist links to its name.

Punters have been left stunned by the move, with many questioning the decision to part with a deeply entrenched symbol of the town’s history.

According to local lore, ‘The Black Bitch’ dates back to the 17th century and was named after a black, female greyhound that forms part of the town’s crest.

In the tale, the brave pet saves her owner from starvation while imprisoned on Linlithgow Loch, and is referred to within the community as a reminder of her bravery.

A statue commemorating the local legend still stands to this day in the centre of the historic Scottish town, while its coat of arms features the black dog chained to an oak tree.

The pub will reportedly be named The Black Hound after a lengthy consultation with both internal and external groups, including a local race and equality forum. 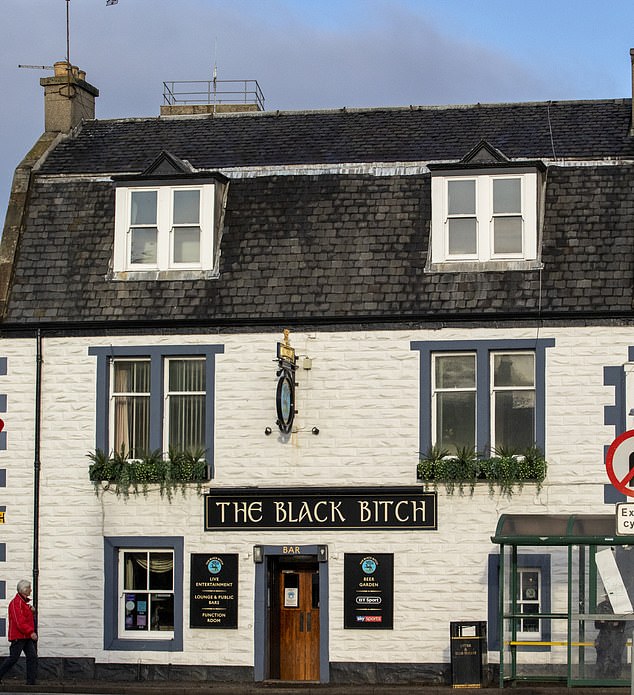 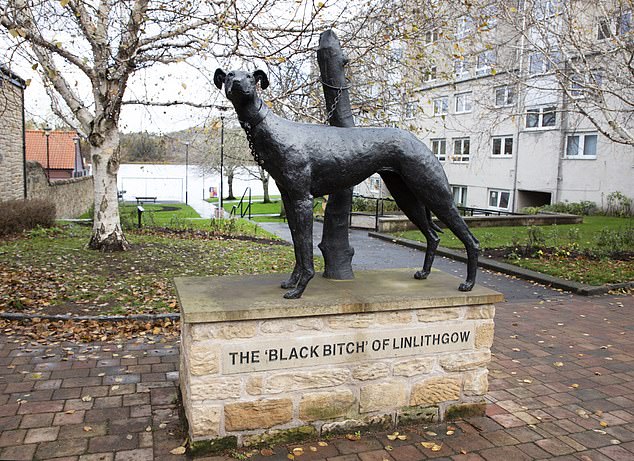 According to local lore, ‘The Black Bitch’ dates back to the 17th century and was named after a black, female greyhound (pictured above) that forms part of the town’s crest

The pooch is said to symbolise a local legend of a hunting dog that swam to its imprisoned master on Linlithgow Loch and saved his life – proving the pets really are man’s best friend.

But in spite of the town’s rich local history, Greene King announced plans to rebrand the historic public house in line with the company’s ‘anti-racist’ policies.

A planning application is set to be submitted to West Lothian Council to alter the name written on the pub sign since the 17th century.

After the news was announced, furious locals took to social media to slam the decision.

Catherine Williams wrote: ‘It’s ridiculous, it is a black female dog, part of the history of the town and a symbol of loyalty!’

Bruce Gardner added: ‘This is a complete joke, it’s named after a black female dog.

‘How many of the people consulted that said they wouldn’t consider going into it would actually live close enough to go if the name was changed. This has gone too far now and needs to be stopped.’

Laura Anderson quipped: ‘Is it April Fools Day already? This is a joke. This is part of Linlithgow’s history.’

Meanwhile, Morag Nelson asked: ‘Where does it stop? The White House? It has never been a racial slur. It’s an historic honour to have this title.’

In making its decision Greene King spoke with people both internally and with local groups, including the West Lothian Community Race Forum, reports the Linlithgow Gazette.

Punters have been left stunned by Greene King’s decision, with many questioning the decision to part with a deeply entrenched symbol of the town’s history

Commenting on the move, Greene King’s CEO Nick Mackenzie said: ‘This is an important decision to take but we feel strongly that it is the right one.

‘We have spent many months reviewing and discussing this as we understand that changing this name will attract a range of views, but as part of our commitment to being an anti-racist organisation we want our pub names to be welcoming and inclusive and that means taking action when there is a need to make a positive change for the better.’

It comes after similar moves were made by the chain, which runs more than 3,000 pubs across the UK, in recent years. 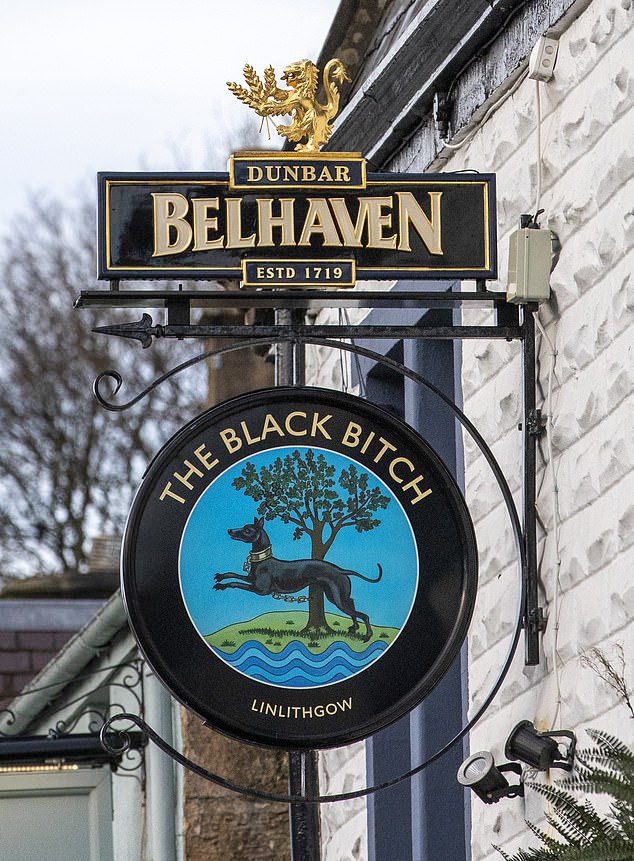 In spite of the town’s rich local history, Greene King announced plans to rebrand the historic public house to fall in line with the company’s ‘anti-racist’ policies 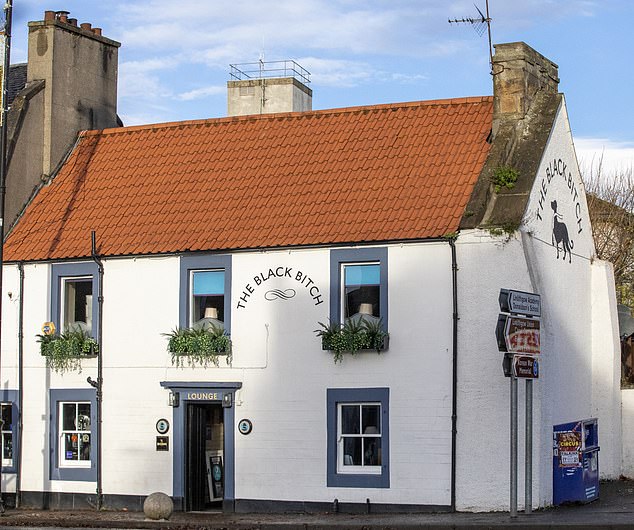 The pub will reportedly now be named The Black Hound after a lengthy consultation with external groups, including West Lothian Community Race Forum

In 2021, Greene King confirmed three pubs in Suffolk and Berkshire all called The Black Boy were set to get new names.

Across England and Wales, there are at least 25 different pubs called The Black Boy, or similar.

But the name has come under fire from anti-racism campaigners amid protests by the Black Lives Matter movement in the UK.

Greene King was criticised last year for its own links to slavery – with its owners pledging to make donations to ‘benefit the Black, Asian and Minority Ethnic community’.

The pub chain was founded in 1799 by Benjamin Greene – who was one of 47,000 people who benefited from a policy of compensating slave owners when Britain abolished slavery in 1833.

He received the equivalent of £500,000 in today’s money after giving up his claim to three West Indies plantations.

Greene King traces its links to slavery to its founder, Benjamin Greene, who records show held at least 231 on Caribbean islands.

Born in 1780 in Northamptonshire, Greene moved to Bury St Edmonds, Suffolk, where in 1806 he founded what would become the UK’s largest brewery.

He inherited plantations in the West Indies from Sir Patrick Blake, 2nd Baronet, upon his death.

In 1828, he bought the Bury and Suffolk Herald, at a time when the campaign to abolish slavery was being debated.

In his role as a newspaper proprietor, Greene used the pages of the broadsheet to ferociously oppose abolition.

According to his Oxford biography, he campaigned with ‘enormous vigour into representing the interests of the West Indian slave proprietors at a critical juncture of their affairs.’

His opposition to abolition saw him become a figure of controversy in Suffolk, and in 1837 he moved to London where he founded Benjamin Greene & Son – West Indian ship merchants – with his son in Russell Square.

Despite Greene’s protestations, MPs passed the Slavery Abolition Bill in 1833, on the condition that slave-owners were compensated for freeing their slaves.

Records archived by UCL show Greene claimed the modern equivalent of £500,000 for 231 slaves in the West Indies.