Hirving Lozano scored a goal in a huge win for Mexico against Germany in the World Cup, which at the time earned him a nice little upgrade for the FIFA 18 World Cup mode.

Now though, the FIFA 18 FUTTIES are here, recognising the best players from this season, and Lozano features again, with a much better card.

He’s rated at 92 overall, and while they are certainly played rated higher than that in Ultimate Team, Lozano’s main stats are right up there with the best of them. 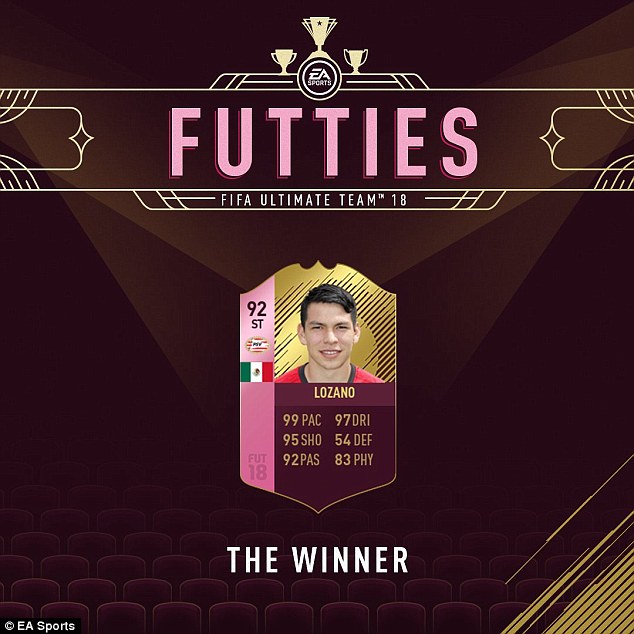 Lozano was voted as the ‘favourite out of position player’ by the FIFA community, and thus got a position change, and a huge boost to his stats.

The PSV player has undergone a bunch of changes in this year’s FIFA. He started at 78 overall, got a little boost in the winter, and then started getting all sorts of upgrades. His best one was a World Cup Team of the Tournament card.

He started at the left wing position, then went to the right wing, and his World Cup Team of the Tournament card was actually a left midfielder. Now, he’s moved to striker.

His newest one is his best yet though, taking him up to 92 overall with high stats in just about every category that matters.

He’s got 99 pace, including 99 acceleration and 98 sprint speed, and you can’t beat that. Combine that with 97 dribbling, 4 star weak foot and 4 star skills, and 95 shooting and you’ve got a formidable threat up front.

Add on to that 92 passing, which will help him and his teammates to get into good positions around the box, and a pretty good 83 physical allowing him to stay on the ball, and Lozano is one of the best strikers around.

He’ll probably even be a bit cheaper than some of the big names out there, since he’ll be a little trickier to fit into an Ultimate Team squad in terms of chemistry. Mexican nationality and Eredivisie league aren’t the most popular.

His Squad Builder Challenge is available for another day or so.