The hunter becomes the hunted: ‘Dead’ bear shot with a rifle springs up and attacks its would-be killer

A hunter has been viciously mauled after a miss-shot failed to kill a bear.

Alex Machavo, of Medford, Oregon, was attacked by the injured animal near Shady Cove on Thursday.

According to Andrea Carlson, a local sheriff’s spokeswoman, the hunter and his wounded target rolled down a 50-ft embankment with the bear biting 22-year-old Machavo all the way down. 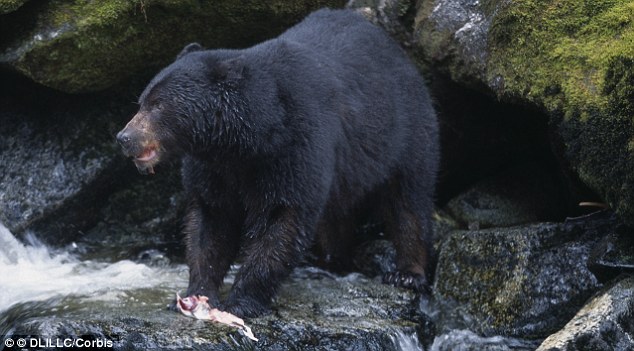 Black Bears number about 30,000 in Oregon and are North America’s most common bear

A second hunter, 24-year-old Nathan Shinn of Phoenix, Oregon, was eventually able to shoot and kill the wounded animal.

Responding deputies found Machavo on a forest road and had him rushed to a Medford hospital.

Machavo’s condition wasn’t available but Carlson says his injuries did not appear to be life-threatening.

Shinn was unhurt. Carlson says the hunters had a tag that allowed them to shoot the bear legally.