‘Global Britain is shut for business’: Theresa May savages Boris Johnson over travel traffic light system as she mocks the PM and says the current rules are ‘chaotic’

Theresa May today savaged Boris Johnson over his travel traffic light system as she mocked the Prime Minister and said ‘Global Britain’ is currently ‘shut for business’.

Mr Johnson’s predecessor in Number 10 said the Government’s messaging on international travel is ‘mixed’ while the red, amber and green rating system is ‘chaotic’.

She accused ministers of failing to deliver on pledges to get holidays abroad back up and running and claimed the UK had actually ‘gone backwards’ on the issue when compared to last year. 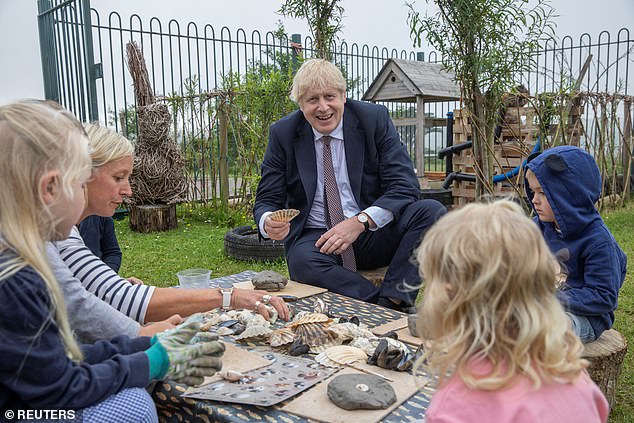 Mr Johnson’s risk-based system rates countries one of three colours which determines the quarantine and coronavirus testing requirements people face when returning to the UK.

Ministers have advised against travel to amber and red list countries while the green list is relatively short and was plunged into chaos this week after Portugal was removed from it.

Travel chiefs have called for the traffic light system to be scrapped amid growing fears for the future of the aviation and tourism industries.

Speaking during a debate this afternoon in the House of Commons on the state of the travel sector, Mrs May said the Government had failed to act on its promise from June 2020 to get internationally-agreed standard health measures in place.

She also appeared to poke fun at Mr Johnson as she seized on his ‘Global Britain’ slogan.

She said: ‘One year on, we are no further forward – indeed, what we have is a devastated industry, jobs lost and Global Britain shut for business. More than not being any further forward, we’ve gone backwards.

‘We now have over 50 per cent of the adult population vaccinated – a wonderful programme – yet we’re more restricted on travel than we were last year. In 2020, I went to Switzerland in August, South Korea in September, there was no vaccine and travel was possible – this year there is a vaccine, travel is not possible. I really don’t understand the stance the Government is taking.

‘Of course it is permissible to travel to countries on the amber list provided it is practicable for you to quarantine when you come back but Government ministers tell people that they mustn’t travel, they can’t go on holiday to places on the amber list. The messaging is mixed and the system chaotic.

‘Portugal was put on the green list, people went to the football, then Portugal was put on the amber list – leaving holidaymakers scrambling for flights and devastated families having to cancel their plans, not to mention the impact on the airlines, travel agents here, and on the travel industry and tourist industry in our longest-standing trading partner in Europe.’

The former premier said business travel is ‘practically impossible’ at the moment as she urged ministers to be ‘up front’ with the British public about the ‘facts’ on foreign travel.

She told MPs: ‘First, we will not eradicate Covid-19 from the UK. There will not be a time when we can say that there will never be another case of Covid-19 in this country.

‘Secondly, variants will keep on coming. There will be new variants every year. If the Government’s position is that we cannot open up travel until there are no new variants elsewhere in the world, then we will never be able to travel abroad ever again.

‘The third fact that the Government needs to state much more clearly is that, sadly, people will die from Covid here in the UK in the future, as 10,000 to 20,000 people do every year from flu.’

Mrs May also said the UK is ‘falling behind the rest of Europe’ when it comes to making decisions on travel.

She said the Government must ‘decide whether it wants an airline industry and aviation sector in the UK or not, because at the rate it’s going it won’t have one’.

‘It is incomprehensible that one of the most heavily-vaccinated countries in the world is one that is most reluctant to give its citizens the freedoms those vaccinations should support,’ she said.