Boris Johnson‘s Tories have stretched their poll lead over Labour to 11 points despite a fortnight spent fighting political fires – but there are signs Boris Johnson’s vaccine bounce is running out of energy.

A poll released today by Survation puts the Conservatives up 2 per cent on 43 per cent, ahead of Labour, who fell 3 per cent to 32 per cent.

But the survey carried out between July 5 and yesterday, showed a fall in approval for the Prime Minister putting him in negative territory for the first time since April.

Meanwhile a second poll by Ipsos MORI shows public approval of the PM and his Government had fallen to a nine-month low even before the row over racism shown towards England players after the Euro 2020 defeat by Italy.

It showed the PM’s net satisfaction has fallen from -3 in June to -16 this month, the lowest figure since October 2020. The Government’s overall approval has fallen from -4 last month to -20 in July.

However the poll conducted from July 2-8 also found the Tories still comfortably ahead of Labour in voting intention, by 9 per cent. 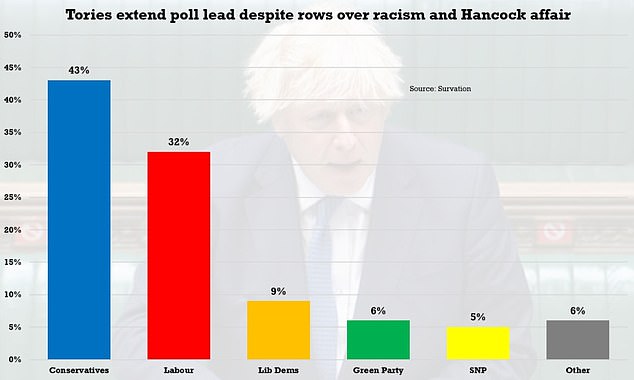 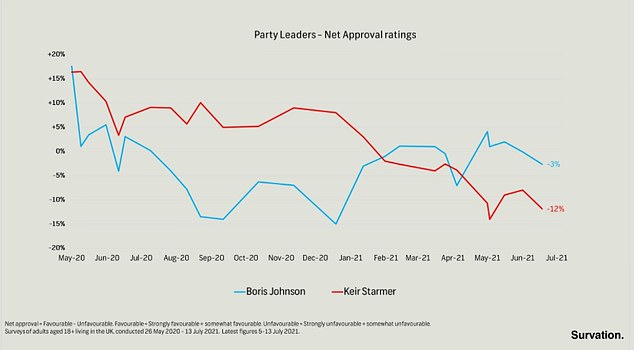 Ipsos MORI’s director of politics Keiran Pedley said: ‘It will concern Johnson and his government that current public satisfaction scores are the lowest they have been since last October, although the Conservatives will be happy that they are still comfortably ahead of Labour in terms of voter preference.

‘However, it is less clear where we will be come party conference season. We should expect what happens when final Covid restrictions are eased, and how that is managed this summer, to play a significant role in where public opinion stands this autumn.’

Mr Johnson’s Government has been engulfed in a row over racism aimed at Three Lions heroes, with Home Secretary  Priti Patel under fire for criticising players who took the knee before games.

‘I utterly condemn and abhor the racist outpourings that we saw on Sunday night,’ he said at Prime Minister’s Questions.

‘So what we are doing is taking practical steps to ensure that the football banning regime is changed so that if you are guilty of racist abuse online on football, then you will not be going to the match.

‘No ifs, no buts, no exemptions, no excuses.’

Mr Johnson, however, rejected a call by Labour leader Sir Keir Starmer to condemn Home Secretary Priti Patel after she dismissed the team’s actions in taking the knee at the start of matches as ‘gesture politics’.

He is also facing fury over a lack of clarity ahead of July 19’s end to lockdown. With days to go there is a row over continued mask wearing and a lack of guidance for businesses wanting staff to return t their main place of work.