Germany Strongly bonded male baboons hold each other back when it comes...

Donald Trump tested positive for Covid-19 three days before his first debate against Joe Biden, his former chief of staff Mark Meadows has claimed in his new book.

Meadows writes that Trump tested positive on September 26, the day of the Amy Comey Barrett’s Supreme Court nomination that turned into a super-spreader event, and six days before he announced on Twitter that he was infected and subsequently hospitalized.

As Trump boarded Marine One on the way to a Pennsylvania rally after the Barrett event, a White House physician called aides on board to say: ‘Stop the president from leaving. He just tested positive for Covid.’

But Meadows writes in the excerpt obtained by The Guardian that it was too late to turn around and on learning of the news Trump said something that rhymes with: ‘Oh spit, you’ve gotta be trucking lidding me.’

‘Nothing was going to stop [Trump] from going out there’, Meadows wrote. Trump did test negative a short time after the initial positive, but the first result was not released to the public and has been under wraps for more than a year.

At the time of their showdown in Cleveland on September 29, Trump was 74 years old, while Biden was 77.

Donald Trump tested positive for Covid-19 three days before his first debate against Joe Biden (pictured) on September 29, the former president’s fourth and last chief of staff has revealed in a new book

Trump went on to announce that he had Covid-19 on October 2, three days after the debate. The White House said the then-president announced the positive result within an hour of receiving it, and went to hospital later that day.

Meadows’ memoir, titled The Chief’s Chief, will be published next week by conservative outlet All Seasons Press.

The book says Trump’s September 26 positive result was a shock to the White House, which had just staged a Rose Garden ceremony for Supreme Court nominee Amy Coney Barret – an event now widely considered to be a Covid super-spreader.

While the president looked ‘a little tired’ and suspected he had a ‘slight cold’, Meadows writes he was ‘content’ with Trump travelling to a rally in Middletown, Pennsylvania that evening. 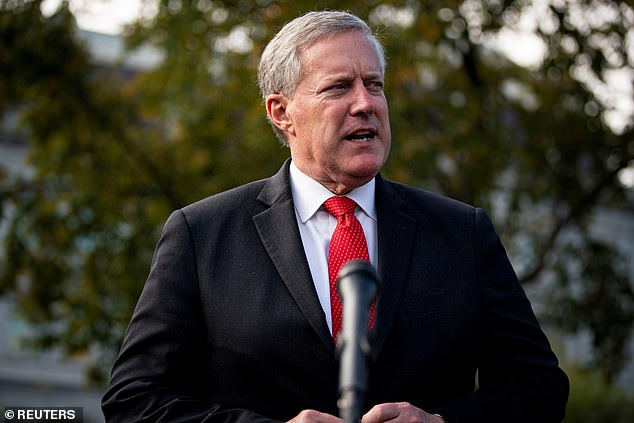 Pictured: Mark Meadows, President Donald Trump’s fourth and last Chief of Staff during his time in the White House. Meadows is releasing a new book titled The Chief’s Chief, in which he has revealed Trump has tested positive for Covid three days before a debate with Joe Biden

A TIMELINE OF THE PRESIDENT’S TRAVEL BEFORE ANNOUNCING COVID INFECTION

Saturday, September 26: Trump announces his Supreme Court pick at the White House, then travels to a rally in Pennsylvania with aides including Hope Hicks.

Sunday, September 27: The president plays golf in Virginia, gives a press conference in the White House briefing room and hosts a reception for Gold Star families.

Tuesday, September 29: Hicks is aboard Air Force One with the president and Melania to travel to the first presidential debate in Cleveland. Hicks is seen leaving the jet without a mask.

The president spars with Joe Biden in a chaotic debate. Trump family members do not wear masks during the debate, violating venue rules.

Wednesday, September 30: Hicks travels on Marine One and on Air Force One to a rally in Minnesota Wednesday.

She is understood to have felt poorly on the way back, quarantining on the presidential plane to get home.

Trump says he is awaiting test results, before confirming he and wife Melania have tested positive for Covid-19.

Friday, October 2: A political rally in Sanford, Florida is cancelled.

But as Marine One took off, Meadows writes that the White House doctor Sean Conley called, telling the Chief of Staff: ‘Stop the president from leaving. He just tested positive for Covid.’

Meadows was unable to stop him from leaving however, and broke the news to Trump when he called from Air Force One.

The surprise was due to the president being a ‘massive germaphonbe’, Meadows writes, with Trump avoiding seeing anyone who hadn’t been rigorously tested themselves.

He also writes that the positive test result came from an older model kit, telling Trump that the test would be repeated with a different model.

Meadows later called back after ‘a brief but tense wait’ to tell the president of a follow-up negative test. Trump, Meadows writes, took the call as ‘full permission to press on as if nothing had happened.’

The Chief of Staff instructed everyone in the president’s immediate circle to treat him as if he was positive, he says in the book.

Meadows says that the audience at the rally would have not known anything was wrong.

The public was not told about the president’s tests.

Despite Meadows saying that Trump knew he tested positive for Covid-19 on September 26, the president would go on to suggest that he caught the virus from Gold Star family members at an events on September 27.

Trump complained that they stood too close to him at the event that honored families of fallen US service members.

‘They want to hug me, and they want to kiss me. And they do. And, frankly, I’m not telling them to back up. I’m not doing it,’ Trump told Fox Business in October 2020 after his recovery. ‘Give me room. I want room. Give me 12 feet. Stay 12 feet away when you talk.’

On September 28, he staged an event during which he spoke to business leaders, and held a Rose Garden press conference later that day.

On the day of the debate – September 29 – Meadows writes that Trump was looking ‘slightly’ better. The host, Chris Wallace of Fox News, later said that Trump was not tested before the debate because he was late to arrive.

Wallace said organisers relied on the honor system. The White House did not say that Trump had tested positive then negative three days prior to the debate.

Three days after the debate, on October 2, Meadows helped Trump get to the hospital. Trump announced on Twitter that he and his wife Melania Trump were positive for Covid-19.

During Trump’s stay in hospital, Meadows helped orchestrate events designed to show the president was in good health. Trump recovered, but it has been reported that his Covid infection was more series than the White House ever said. 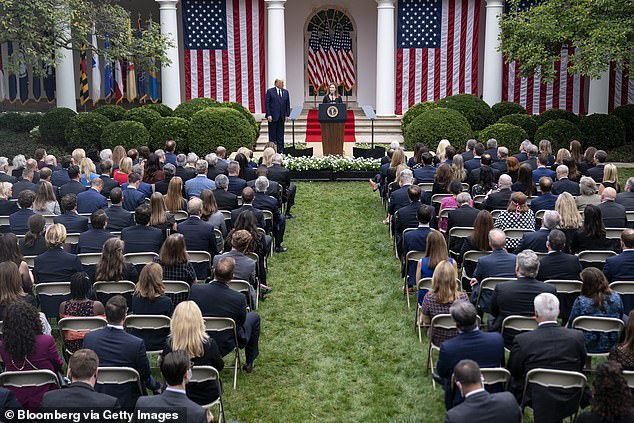 The book says Trump’s September 26 positive result was a shock to the White House, which had just staged a Rose Garden ceremony for Supreme Court nominee Amy Coney Barret – an event now widely considered to be a Covid super-spreader. Pictured: Trump stands next to his successful candidate for the U.S. Supreme Court Amy Coney Barret as she delivers a speech

The copy of the book was obtained by The Guardian on Tuesday, the same day Meadows announced that he would reverse course and cooperate with the House committee investigation into the deadly January 6 attack on the Capitol building.

A lawyer for Meadows, George Terwilliger, said Tuesday that he was continuing to work with the committee and its staff on a potential accommodation that would not require Meadows to waive the executive privileges claimed by Trump or ‘forfeit the long-standing position that senior White House aides cannot be compelled to testify before Congress.’

Terwilliger said in a statement that ‘we appreciate the Select Committee’s openness to receiving voluntary responses on non-privileged topics.’

He had previously said that Meadows wouldn’t comply with the panel’s September subpoena because of Trump’s privilege claims.

Thompson said that Meadows has provided documents to the panel and will soon sit for a deposition, but that the committee ‘will continue to assess his degree of compliance.’

Under the tentative agreement, Meadows could potentially decline to answer the panel’s questions about his most sensitive conversations with Trump and what Trump was doing on Jan. 6.

Still, Meadows’ intention to work with the panel is a victory for the seven Democrats and two Republicans on the committee, especially as they seek interviews with lower-profile witnesses who may have important information to share.

The panel has so far subpoenaed more than 40 witnesses and interviewed more than 150 people behind closed doors.