Boris Johnson will scrap a ban on ‘buy one get one free’ junk food deals and a 9pm watershed for sugary snacks to help poorer families.

The policies are being pushed back for at least a year in an attempt to soften the blow of soaring living costs but they could be ditched entirely.

Mr Johnson aims to prioritise creating jobs and boosting the economy, moving away from ‘nanny state’ interventions that he famously opposed until recently.

The Prime Minister announced the policies as part of a crackdown on obesity after a near-fatal bout of Covid in 2020 — which he attributed to being too fat.

A new law restricting offers on foods high in fat, sugar and salt was due to come into effect in medium and large shops in October. Under the plans, junk food giants were also to be banned from advertising online and before 9pm on TV by January 2023.

But Mr Johnson has finally bowed to pressure from his backbenchers — who have been lobbying for them to be ditched for months and whose support is key for the PM following the Partygate scandal.

Health campaigners immediately hit out at the U-turn, saying it ‘completely contradicts’ the Government’s levelling-up ambitions. 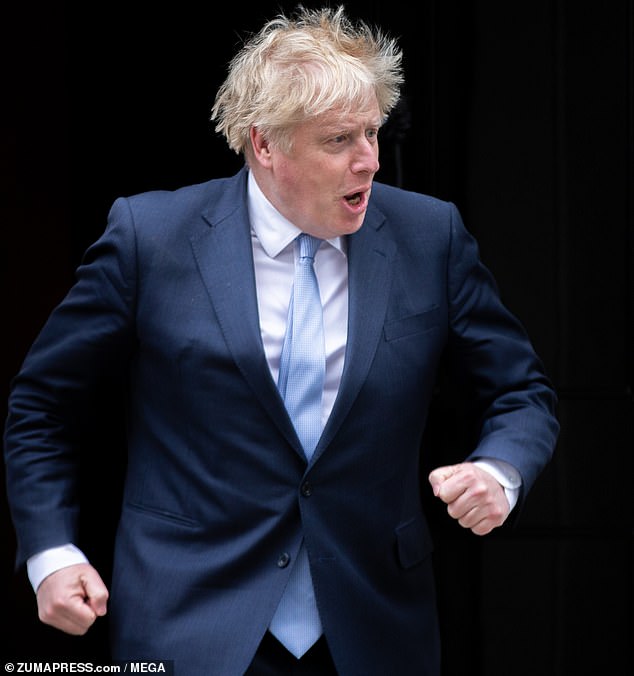 Many anticipated that the ‘Bogof’ and junk food bans would have been ditched in January when No10 announced a series of Tory-pleasing policies to fend off a revolt within the Conservative party over boozy lockdown parties in Downing Street.

But the Prime Minister held off, with the first of the anti-obesity measures – mandatory calorie labelling on menus in England – coming into force last month.

Lockdowns made British children even fatter

Lockdowns and school closures have been linked to an ‘unprecedented’ rise in childhood obesity in England.

Government data shows record numbers of youngsters were obese or morbidly overweight by the time they started Reception or left primary school in April 2021.

Many experts warned at the time that locking down children, despite their low risk of Covid, could have long-lasting repercussions on their health.

One in seven youngsters in Reception were obese last April after three national lockdowns — compared to one in 10 before the pandemic.

The proportion that were too fat by the time they got to Year 6 rose to one in four, up from one in five pre-Covid. Almost one in three boys are now obese by the time they finish primary school.

It marks the biggest increase in childhood obesity since records began in 2006, the Office for Health Improvement and Disparities said.

The pandemic has also widened health inequalities, with those from the poorest areas now twice as likely to be obese as those from the wealthiest parts on average.

Mr Johnson is said to have been convinced to axe the ban on multibuy junk food discounts by ministers who said now was the wrong time to heap more costs on families already struggling with the cost of living crisis.

The delay to the advertising ban has come as more of a surprise because it would not have had a direct impact on working people’s pockets.

According to The Times, David Canzini, the prime minister’s deputy chief of staff, is also said to have convinced the PM to focus on core priorities such as boosting growth.

A source said that Canzini had been ‘in [Johnson]’s ear, saying ‘this ain’t working for you, just drop it’. It’s such an obvious one to throw into the cost-of-living mix.’

The campaign group Action On Sugar described the move as a failure to children.

Professor Graham MacGregor, a cardiologist at Queen Mary University of London and chairman of Action on Sugar, said: ‘Boris Johnson could have left a legacy of being the first Prime Minister to address obesity in a meaningful way, particularly in restricting advertising and promotion of unhealthy food which were his flagship policies.

‘Instead, he has given in to his own MPs, and an aggressive food industry, who – ironically – were starting to comply with these new policies.

‘This completely contradicts the Government’s levelling up ambitions. It will also massively impact the NHS and the nation’s health, which will suffer the consequences and escalating cost of treating obesity, Type 2 Diabetes and tooth decay – all linked to our very high and unnecessary sugar, salt and saturated fat intakes, that the food industry is entirely responsible for.’

More than a quarter of children starting primary school are now overweight or obese, rising to four in 10 for youngsters aged 11 to 12.

And children from the poorest areas are more than twice as likely to be obese than those from the richest areas.

Meanwhile, two-thirds of adults are overweight or obese, costing the health service £6billion a year.

The Government pledged to halve childhood obesity and tackle close inequalities between youngsters from the most and least deprived areas by 2030.

The ‘Bogof’ ban due to come into force in October would have forced shops with more than 50 employees to phase out offers on food high in fat, sugar and salt.

They would have also be ordered to stop promoting unhealthy food offers at checkouts, store entrances or at the end of aisles.

Pubs and restaurants would have been barred from offering free refills of sugary soft drinks.

Caroline Cerny, of the Obesity Health Alliance of doctors and charities, said that it was ‘an abysmal move’.

‘Right now child obesity is at a devastating all-time high, and research shows restricting junk food adverts on TV alone would significantly reduce the number of children with excess weight,’ she said.

‘Big challenges like child obesity need bold leadership, not a government that shirks its responsibility and continues to let unscrupulous food companies bombard us with aggressive advertising and fake bargains at the expense of our health.’